There have been many challenges in translating the Legions of Zharradan Marr from the page to the tabletop but this was in some ways the greatest - the Galleykeep.


Thanks a lot Russ Nicholson! 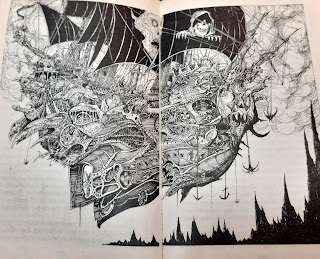 I mean look at the thing - hanging there in all its baroque majesty, dripping with detail upon ever more intricate detail, faces on demonic faces, chains, anchors, propellers, potash bomb launchers, trident cannon and room to accommodate a thousand troops...

How am I supposed to make a model of this?!

However, I was not completely without previous experience in this field and this isn't the first fantastical ship I've tried to reproduce in miniature form as some of you might remember. Cue Wayne's World flashback dissolve...

Now I'm aware that my posts on that particular project stop here in a most unsatisfactory way and, what's more,  I never got round to posting any kind of report on what was one of the most fun games I've ever had - what can I say? Unfortunately it all coincided with me quitting my teaching job and uprooting the family from York to the wilds of Cumbria so that I might roam the fells and try and get my toe in the door with the National Park and ask them nicely for a job as a Park Ranger. Luckily that all worked out nicely for me but meant quite a few months of radio silence until I happily broke my leg a week before the actual move and finally had a good excuse for sitting around painting little men and writing about it again! After all that, I think the nearest I got to writing about the Time Bandits' ship was some references to the game in this post - and while we're on the subject of improbable sailing vessels, huge kudos to Geoff for the best flying ship I've seen yet - Zee Klindenbourg!


I'm sure I've threatened this in the past but I really mean it this time - once I get around to painting a certain set of miniatures I have in my possession, (next on the paint table once the lobotomised Ogres and their carts are done for the Dolgan Raiders scenario) and have repaired the damage almost 5(!) years of storage has incurred on the model, I will be posting long overdue updates on the Time Bandits ship. 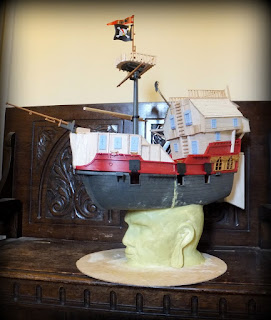 Anyway I digress and must hasten back to the lofty peaks of the Craggen Heights and forboding crags of the Trolltooth Pass! So where does one start to build a model based on that fabulous Russ Nicholson illustration? I spent many an evening on various auction and model websites, tracking down pirate ships, galleons, Men 'O War and caravels.  Having dabbled with the odd 74 gun third rate Ship of the Line, they were added to the search as well. I just needed something which would provide the basic chassis for the Galleykeep. In the end Revell's Ghost Ship won out, both for aesthetics and being budget friendly. There were models out there that better matched the Galleykeep's exaggerated galleon shape and were bigger but they came with a hefty price tag and you didn't get a free bottle of glow in the dark paint! 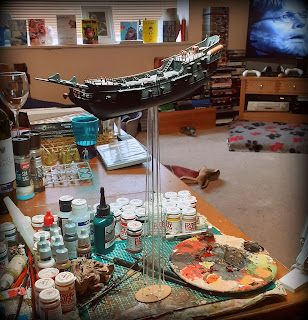 As I mentioned in my post on the Tooki, once I'd set my heart on the Revell Ghost Ship, I had to convey the idea that it was flying way above the battlefield with a bit of forced perspective as it was a relatively small model. 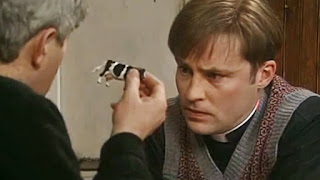 Huge thanks to Chris Cale for coming to my aid when I failed to locate flying bases as tall as I wanted! To make the Galleykeep seem like it was a huge ship, capable of holding a thousand toops in its hold, it would have to be quite high above the tabletop and far away from those big 28mm miniatures scattered all over it. I decided a full 12" would be a good height but soon found out that foot tall flying bases are not widely commercially available. My cry for help went out and as usual the Oldhammer Community does what it does best and aid soon appeared! Chris very kindly offered to manufacture me the very base I wanted and was even willing to accommodate the Tooki as well until I came to my senses and said I'd source more regular, shorter flying bases for them. 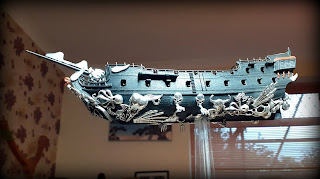 The next big challenge was that mass of detail encrusting the hull of the ship - a daunting prospect! My sculpting skills run to adding a bit of fur or hiding gaps on miniatures so slapping lumps of putty on the model was out of the question. Time was beginning to be in short supply and the game we were to play at BOYL 2019 was looming large on the horizon... 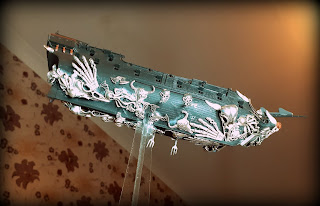 I think it was hunting for anchors and propellers that made me think of cheap costume jewellery in the end. I never realised how expensive and hard to find things like small plastic anchors and propellers were! I'd finally spotted a pair of cufflinks shaped like propellers on ebay that were going for a few quid when the light bulb came on. Charms, pendants, beads and all sorts of other stuff for crafting and jewellery were pretty cheap and there were some great designs out there! 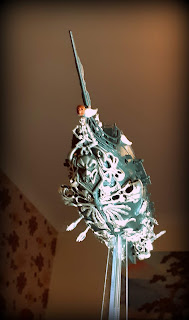 I particularly liked the bird skulls and octopuses as they were slightly reminiscent of all that mad swirling detail in Russ' illustration and they broke up the rather straight lines of the hull a bit. Skeletal hands, human and animal skulls, dragons and bat and bird wings also helped with the effect. I was rather pleased with the big glowering Demon face that leers down from the prow of the ship and the skeletal figure head - about the closest I got to actually matching the drawing! I also had a few tridents left over from the Lizardmen regiment and, since trident cannon are mentioned in the novel, on they went too! 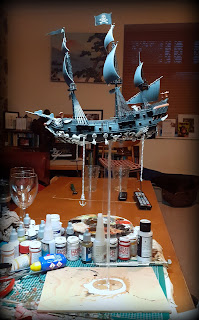 Another problem was not making the model too top heavy since I had to make the ship detachable from the flying stand to give me half a chance of packing it safely enough to survive the three and half hour journey down to Foundry in the back of a Land Rover! Maybe a few more chains and anchors might have weighed it down more but it was getting difficult to pick the ship up and move it as it was. 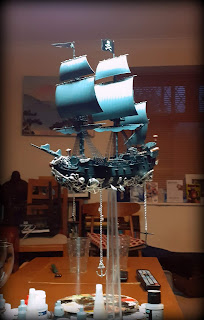 With the masts, sails and rigging on the Galleykeep was beginning to look the part - happily it looked like Revell's Ghostship had roughly the same configuration of sails as Russ' illustration. 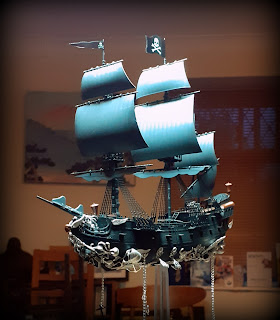 I could have carried on adding bits but I was beginning to fear for the model's structural integrity - it is quite a delicate thing, particularly the masts and rigging. 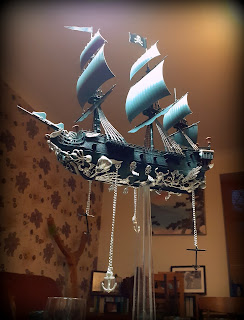 Whilst the ship was looking pleasingly detailed her decks were still empty - a vessel that could carry a thousand troops should surely be bustling with crew! More on that in my next post however.

As fun as the build had been, the realisation that I was going to have to paint the thing was beginning to dawn on me...
Posted by Thantsants at 01:24