So on to the last of the regiments of Zharradan Marr's legions to be featured as part of this project - a unit made up of the most exotic and strange creatures to be found in all of Titan and... well everywhere really. It's the Humans... 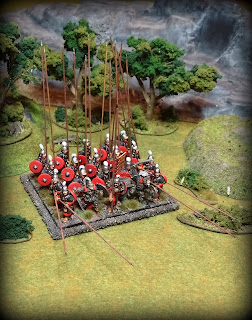 I don't mean to be disparaging but after all the other weird creatures that make up Marr's armies, Humans might seem a little bit humdrum. In actual fact I had a great time sourcing suitable minis to represent the men and women who would be willing to work for the great Necromancer.

I had originally thought of the Advanced Heroquest henchmen as legionaries. Firstly because they had a nice Fighting Fantasy feel and weren't identifiable as Empire or Bretonnian troops as a lot of my other human minis were. Secondly, I'd picked up a copy of AHQ cheap because it had no minis with it! However, they just didn't cut it as private soldiers for an evil sorcerer and looked much better as the Strongarm mercenaries that were hired to replace fallen legionaries from the Cunnelwort Caravan at the beginning of the novel. 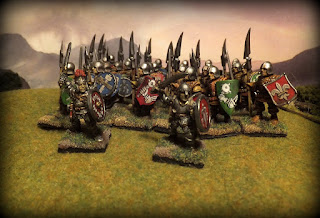 You'll be sick of the name now but Ral Partha had a number of interesting options...

All the following pictures are from the Ral Partha website and not my work and almost all are from the Dark Eye range - which is obviously becoming a bit of an obsession of mine!

As you can see I was headed toward the Orient by way of Wallachia in my search for the perfect legionary - perhaps influenced by such place names as Fang, the Chiang Mai river, Zengis, Kay Pong and Shazaar? 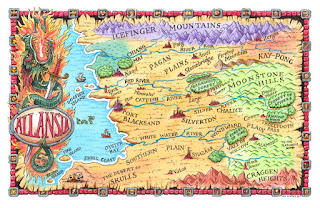 In terms of equipment, I think in the novel the Human Regiment were described as swordsmen but my imagination had already been fired by these minis, and a pike or spear armed block was what my heart was set on. Plus the Rhinomen's spears weren't really long enough to satisfy my want to get some proper pikes on the table! 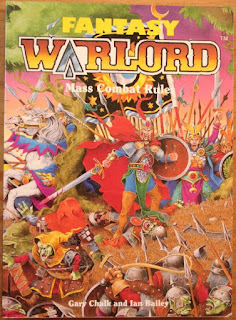 Now a while back I managed to procure a copy of Fantasy Warlord for a reasonable price - a game I became interested in after chatting with a certain Chris Cale about our shared love of (and future plans of playing) the Lone Wolf board game, Battle for Magnamund - the one that had a rather bad time of it on kickstarter and is based on the Fantasy Warlord mechanics - as I was reminded of in a convoluted conversation of my own making on Facebook yesterday! We plan on pooling our copies of the boardgame and the card miniatures of Gary Chalk's amazing artwork and playing Chris' homebrew rules as the ones provided are a little maths heavy shall we say...

Anyway, limping slowly back to the point of this little diversion, my eye was caught by some of the photographs of the original line of minis in the Fantasy Warlord rulebook - notably this Elven pike block featured on the back cover. 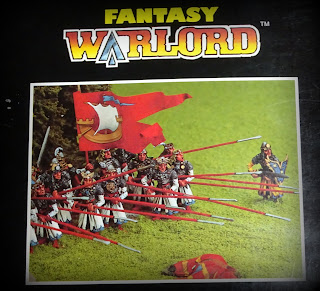 A quick search around and it appeared that Alternative Armies stock the old Fantasy Warlord range - and then I found my perfect legionaries in the form of the soldiers of the Scarlet Empire. 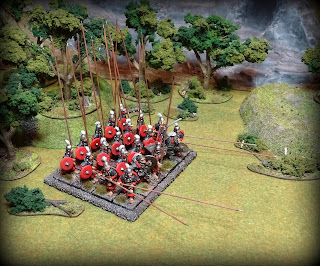 They were nice and uniform, had five different sculpts which weren't quite monopose and had that little touch of the East that I'd decided I wanted. They didn't look overtly evil but could easily be painted up to look the part - from various tidbits of information in Creature of Havoc, I'm not convinced they were all willing recruits anyway... 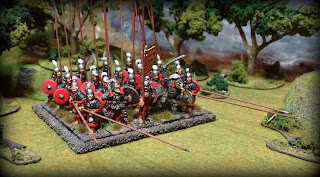 They also fit quite well with the two Legionary champions I'd already painted and it was easy enough to emulate the black and red uniform with the white helmet plume to tie them all together. 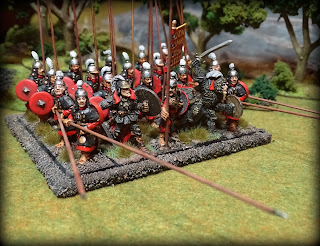 The minis aren't supplied with weapons and they have to be bought separately. There is a great selection from Orc, Elven, Dwarvish and Eastern weapons but you have to buy a mixed set meaning that you either have units armed with a real miscellany of ranged and close combat weapons or you spend a small fortune to get enough spears or swords or whatever to equip everyone with - spare weapons always come in handy so this isn't necessarily a bad thing! 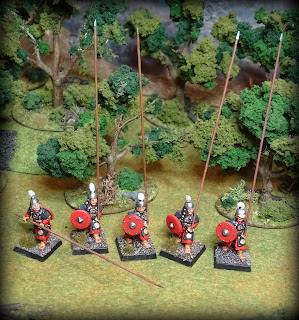 I was already blowing my budget on Ral Partha minis and the base cost of the Fantasy Warlord rank and file at £2 a go was very tempting so I decided to track down some cheap (and lethally sharp when you reach down to move them across the table!) metal pikes on a well known auction site and buy some plastic shields in. Wish I could remember where the shields came from because they were cheap as chips! 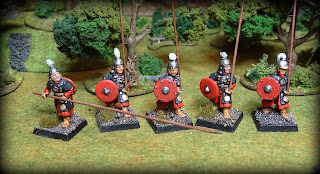 I have to say these minis ended up being a lot of work with the large amounts of flash on them - I wonder how well the moulds have fared over the years. The right hands needed a lot of drilling and filing for those minis levelling their pike for combat like the one on the left - luckily most of the regiment ended up carrying their shields in their right hands! However, they are lovely minis and look great ranked up together. My only regret is that I only needed twenty for this project as the pike block would have looked even better with a few extra ranks. They also have the added bonus of being a start to a small Cathayan force I've been wanting to get on the table for some time and will be fielded as troopers of the Imperial army (like the ones you see in films like Crouching Tiger) to go along with my Foundry Samurai and Ninjas. 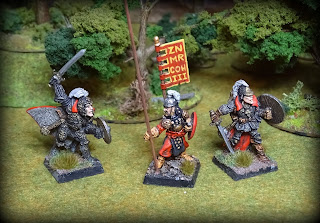 The two D&D paladins who act as leader and champion of the unit you will have seen already. The chap in the middle is a Hero of the Scarlet Empire - another Fantasy Warlord figure. 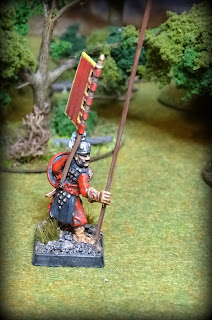 I must have been pushed for time to be ready for BOYL as I only painted his back banner, rather than giving him a full regimental standard like the Rhinomen and Lizardmen. 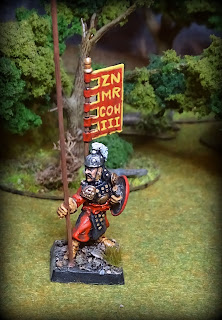 He may get one in the future or he may not - without one it does make the unit more flexible for using in Warhammer games - unless I look in to detachable (magnetic?) banners?!

And that folks is nearly all for the Trolltooth project - just the small matter of Marr's flagship to go...
Posted by Thantsants at 23:37