The Dolgan Raiders project trundles on - much like the Hobgoblin Caravan, pulled by their lobotomised slave Ogres, who are the subject of today's post! 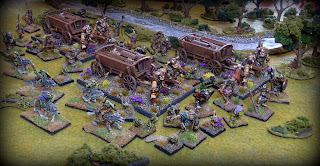 In fact the project is all but complete with the addition of the Ogres and their wagons, which makes a nice change to the usual epics I seem to grind away at for months and years! Having said that, I know my opponent, Richard, is doing the Dolgans, but I am quite tempted to try my hand at them as well at some point in the future - and there's some lovely minis that were part of the original release. 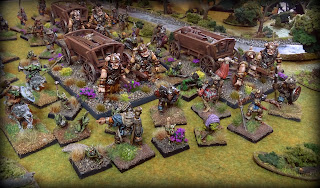 I say lovely but I don't recall ever seeing an advert for them like the ones for Orc's Drift, McDeath and the other scenarios - other than this price list. Thanks to Quendil and his brilliant blog, Quendil's World I finally know what they look like! He has a great post listing all the original scenario miniatures that are still in his collection. A great resource for would be collectors and I'll be staying tuned in case they ever get some paint on them! While I'm on the subject, another excellent blog to check out is The Shamutanti Hills - super posts on Bagnol's Caravan and the Dolgans and a great source of inspiration! 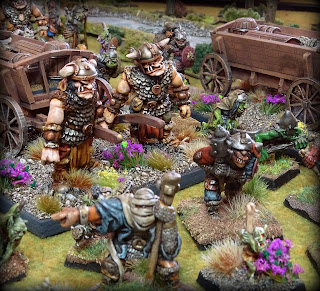 Much as I love the old Ogre Gladiator miniature, it was going to take too long to track six of them down for this project. I had, however, spotted some suitable looking candidates whilst perusing the old Fantasy Warlord range at Alternative Armies for the human Legionaries I used in my Trolltooth project. 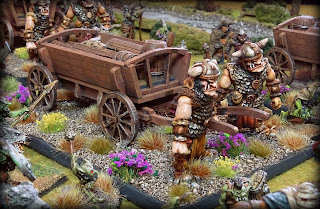 Their pose is a little static but they looked great and also came with one open hand for a weapon - perfect for pulling a wagon instead with the bonus of having some nice big hand weapons to add to the bits box! 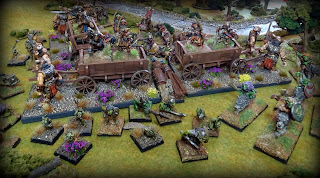 Having taken these photos and spent some time editing them all, I only noticed once I'd uploaded them here that I hadn't added the chains tethering the ogres to their yokes! Looks like you might be seeing these boys again once they're really done along with a few extras I'm painting at the moment - I've found another Hobgoblin archer, a Goblin from the first iteration of Grom's Goblin Guard (seems fitting to have one along as these were the Goblins supplied in the Dolgan Raiders deal) and a couple more Fantasy Warlord miniatures - the Eastern Orc Hero, who looks like he'll make a great Hobgoblin officer, and the Western Orc Discipline Master, who'll do fine as a pack master, slave driver or Ogre whipper! 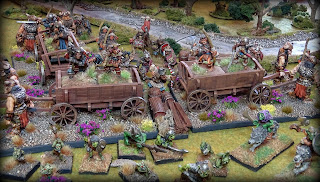 Now the wagons themselves are what will make this game an interesting one - as well as the engaging storyline, interesting characters and dissent and potential backstabbing in the ranks of course! There are a number of rules attached to them. The Ogres can pull them 4" but that drops to 1" if one of them is killed - all dependant on their stupidity tests of course. If both Ogres are killed the wagons can be pushed by a combination of smaller creatures at the rate of 1" per combined 10 points of strength - up to a maximum of 3". Good to know if Bagnol wants to make his escape but has no Ogres left! 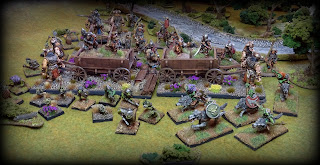 The wagons also count as wooden barricades; very useful if the Hobgoblins draw them up in to a defensive position - the small wooden fortress described in the scenario's story.

Each wagon can be thought of as a mobile building each of toughness 7 and 3 wounds. The wagons are made of wood and can be set alight by fire as if they were wooden buildings.

I feel fire is going to be a key weapon - if a potentially double-edged one! Once a wagon is set ablaze no animal will come within 4" of it. The lobotomised Ogres also dislike fire and if they both fail their cool test if their wagon is on fire, they bolt in a random direction. If only one Ogre fails then the wagon comes to a halt and they both fight to the death!

Not that a game should be played entirely with victory points in mind and both Richard and myself are certainly not power gamers - quite the opposite in fact! There are, however, some pretty serious victory points at risk from fire; 50 points a wagon intact to which ever side controls them at the end and 25 points for damaged ones. The Hobgoblins stand to lose out big style if any wagons are destroyed with a 50 point penalty - easy come, easy go for the Dolgans I guess!

All is not lost however, as the Hobgoblins have the equivalent of fifty buckets of water to fight fires! Again there's some quite fun rules in the 2nd ed. rule book about putting fires out. Miniatures can spend a turn beating a fire out to cancel one point of damage, whilst similarly one bucket cancels one point of fire damage too. A chain of buckets can deliver as many buckets as there are members of the chain, minus the distance in inches from the water source to the fire. I can possibly see a use for those Lesser Goblins while their bigger cousins are fighting off the raiders!

With crazed Ogres fighting to get away from their burning wagons to queues of Goblins chucking buckets of water around, this game is going to be a right laugh! 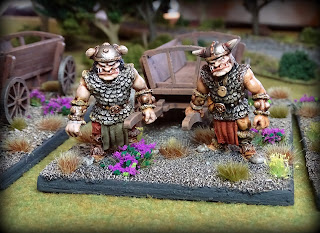 The wagons I finally settled on, after considering all sorts of manufacturers and both lasercut and metal kits, are the Engineer's Cart from Warbases. It looked like the nearest I could get to the illustration from the scenario at a very reasonable price. The kit looked nice and chunky which is always good as these wooden carts can be a little on the flimsy side. 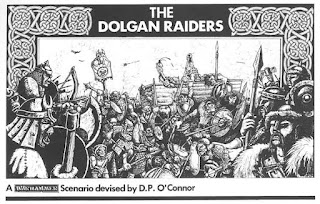 They have the added beauty of a nice little resin load of various bits of equipment that can be lifted easily in and out of the wagon. My only slight complaint is that whilst a mini on a 20mm base fits perfectly inside the wagon, the larger Hobgoblins on their 25mm end up perched a little higher on the side walls. That is just a minor niggle and the wagons do fit rather nicely with the Ogre slaves. 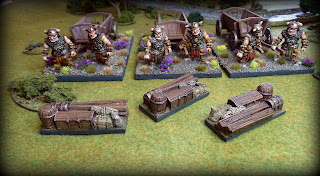 So I'd better get on and get these Ogres chained up to the carts before they wander off! 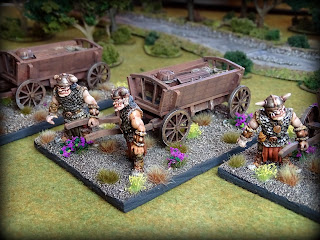