One of our Dictators is missing...

Here is the second scenario of three we played as part of the Dalek Civil War, fought out over an excellent weekend of gaming I hosted a couple of months back.

As you might have guessed from the title of this post, the objective for all three sides in this game was to locate and recover/capture Davros. The Renegades want to apprehend the criminal, Davros to send him back to Skaro for crimes against pure Dalek kind (his use of Human DNA in creating the loyal Imperial Daleks in the Revelation of the Daleks story). UNIT want to capture him as a means of gathering vital intel on Dalek science or at the very least denying the Daleks access to Davros' strategic leadership. The Imperial Daleks of course want to rescue their creator.

The game started with Davros skulking in the centre of the wood in which his escape pod crash landed, having been ambushed by Renegade Dalek saucers in high Earth orbit.

War of the Daleks

Dr Who this time! As some of you will know I'm also a bit of a Dr Who fan and in fact it's also where the name of this blog comes from;

There are worlds out there where the sky is burning, where the sea is asleep and the rivers dream; people made of smoke and cities made of song. Somewhere there's danger, somewhere there's injustice, and somewhere else the tea is getting cold. Come on, Ace, we've got work to do.
Seventh Doctor, Survival

Some time ago, Lenihan of Where the Sea Pours Out fame suggested that we get our heads together and, by way of celebrating the 50th anniversary of Dr Who and the 25th anniversary of the Remembrance of the Daleks story, play a Dalek Civil War scenario. Happily Black Tree Design were having a Black Friday sale last Novemeber so I was able to bolster my existing Dalek force to meet Lenihan's Imperial threat.

This is the first of three scenarios we played during the Battle at the Farm weekend I hosted up in the Lakes. I of course commanded the Renegades, Lenihan brought along the Imperials and Ollie took control of the Brigadier and UNIT.

Howdy folks - apologies for the long absence. I've been a little busy getting ready for what has turned into a massive Siege game we have planned for this year's Oldhammer weekend at Foundry's new place in Newark. I've been up to my neck in marshalling Goblinoids into some kind of order and have a fair bit of painting to do to get the horde ready for August - forthcoming post imminent.

I'm also conscious of the backlog of games I've played recently that I'd like to feature on the blog and would like to clear the decks before the big weekend. Rather helpfully Warlord Paul has written up a fine report of the game we played at the last Blog Con meet up at the Elvington Air Museum (well worth a visit if you're ever in York!) - you can read it here.

So, onto the next game we played a while ago now, during the Battle at the Farm get together I held at my folks' place up in the Lakes.

After a good full English (and me nearly severely burning my hand by foolishly catching the frying pan full of hot oil I had ready for the fried eggs!) we played through the eponymous Rogue Trader scenario, Battle at the Farm.

Now that we had our eyes in and our dice arms warmed up we were ready for bigger (smaller?) things in the form of a three way game of Space Marine (Epic 2nd edition).

Ollie had brought along his rather fine looking proxy Tau force in the form of the Okami Technocracy Combine from Onslaught Miniatures, Richard took control of the Space Marines from my Executioners Chapter and I commanded my Imperial Guard army. 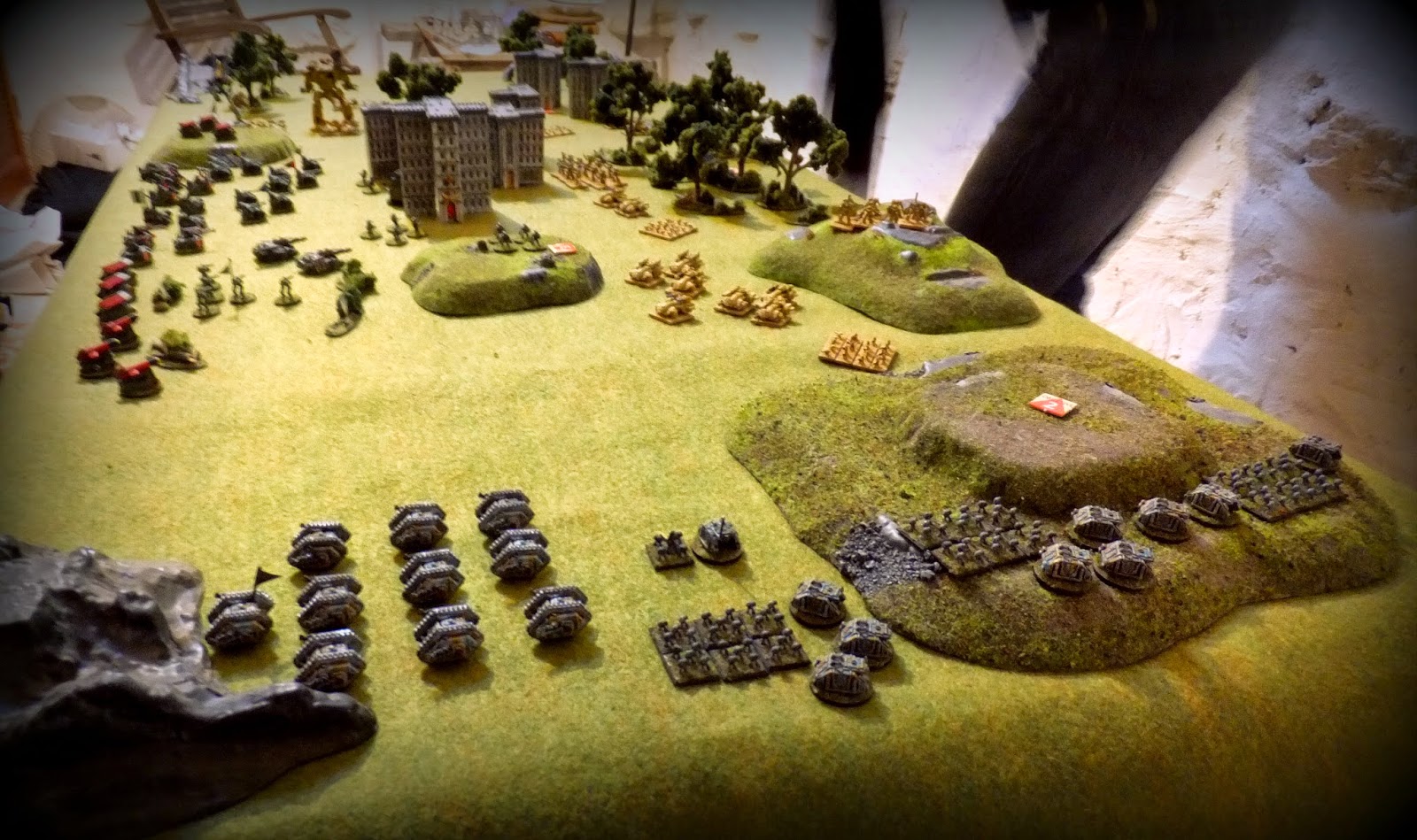