Today's foray in to Darramous' dungeon is the Manic Beast!

Scattered around one corner is an untidy pile of bones. In another corner is a half eaten human carcass. Standing over the carcass - and evidently annoyed that it's meal has been disturbed - is a bulky creature with a hairy face, razor-sharp teeth and wild eyes..." Creature of Havoc, Steve Jackson, illustrated by Alan Langford 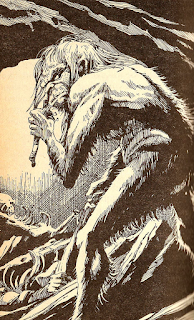 There isn't a great deal of information about the Manic Beast - some say it was the product of Marrangha experiments, a particularly nasty branch of Dark Magic, and quite possibly the work of Zharradan Marr himself. 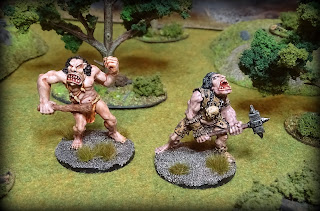 To quote Creature of Havoc again - The Manic Beast is so called for its tremendous bursts of rage. Each time you inflict a wound on the Manic Beast, its anger will rise for the next attack round, and you must add two to the dice roll when it rolls for Attack Strength. 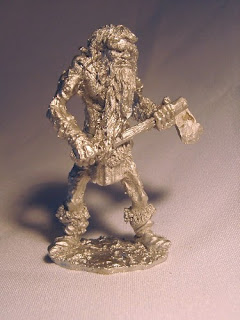 The original Troll, from Ral Partha's Die Schwarse Auge range, I had my eye on for these irritable monsters seemed to have disappeared from their website when I came to make my purchases for this project. It's a great sculpt but I particularly liked it for the similarity of its face to Alan Langford's illustration. 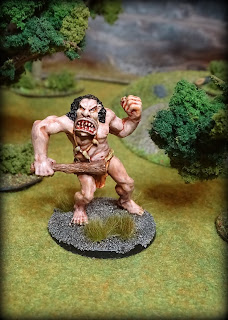 However I did spot these Ogres from the same range instead and they make fantastic substitutes even if they could do with being a bit hairier - and everyone knows every army should have at least two half naked, frenzied Ogres in it! 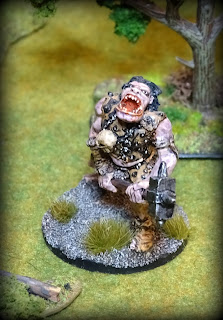 I think the razor-sharp teeth and shouty faces mean that they fit the bill rather nicely! 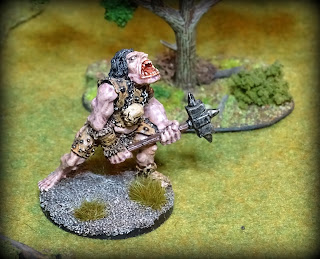 They were a lot of fun to paint and proved good practice for human flesh tones - something I've never felt massively confident with. Not sure whether it's the sheer number of them I've painted or that green is easier to highlight, but I've always found Orc skin much easier to paint.

A few more gribblies to go and then we'll have a look at Darramouss himself...

By the way - glad to see that moderating comments hasn't put you off! I was getting really sick of all the spam appearing!
Posted by Thantsants at 03:50