Oh I do like to be beside the seaside.

Love these minis - they seem a little more Sea Devilish than the ones you can get individually from Black Tree, if that makes sense, and also lend some much needed variation to my growing Silurian force. 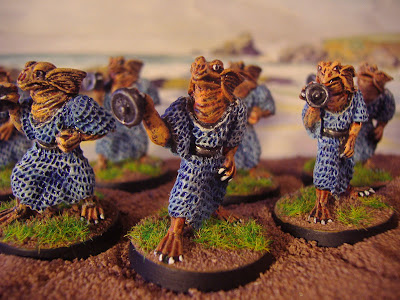 I seem to have gone a little darker in colour than the last batch so may have to go back to them to make less dayglo orange... definitely prefer this more naturalistic duller tan colour. 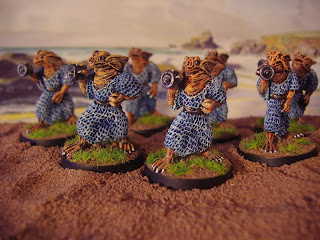 The string vests came up nicely too, with a few pure white highlights suggesting a pearlescent, metallic sheen to the Sea Devils' garb. 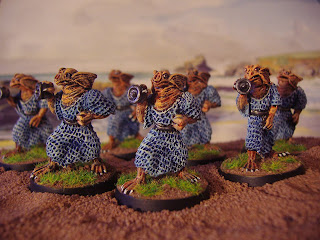 Next up - I'll leave my barbed wire fencing project to concentrate on some windbreakers! 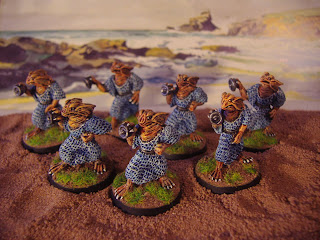 Tried going for a balance with the bases - sand and a bit of static - doesn't look to bad on the beach - could imagine the green is seaweed... Tried for a dune grass look with some longer straw coloured stuff but it didn't look right. Don't think they'll look too bad on a grassy battlefield either. 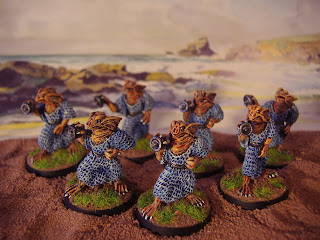 Now I need a bunch of the armoured fellows to act as squad leaders and shock troops and I'll almost be there... 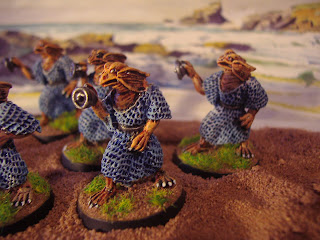 ... apart from the T Rex and Pteranodon riding Silurian hunters I'd like to have a go at converting! 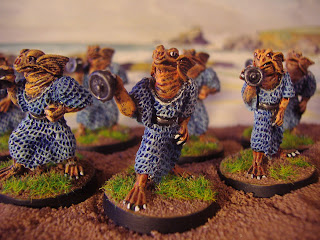 Hopefully my order of Sontarans will arrive before then and give me something slightly easier to get stuck into!
Posted by Thantsants at 16:50 No comments:

Tobias or not Tobias

Finally finished Tobias, Packer and his IE cronies. Decided to use resin scenic bases as a change to the usual static grass and I'm quite pleased with how they have turned out.

The minis are pictured standing in the ruins of a row of terraces, or factory, or whatever else that might happen to get blown up in the course of a scenario. This piece of terrain seems to be taking ages -  must get round to finishing off painting it before the Sontarans I've ordered from BTD arrive! 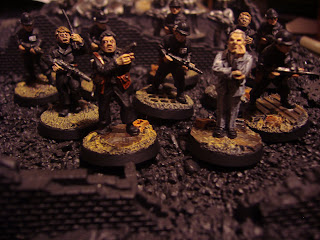 Vaughn ponders as to whether unfeeling, remorseless invaders from space are really a good choice of ally as Packer (left) and the gang advance through the ruins...

Read more »
Posted by Thantsants at 15:50 No comments: