Orcleaver's ugly face screwed into a squint as he followed the scout's pointing finger. 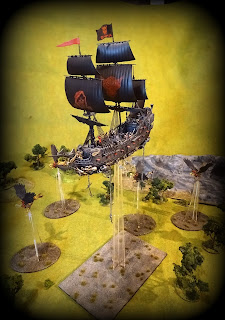 Indeed he does and Orcleaver was right to feel some trepidation at the sighting of the Galleykeep!

The Galleykeep was Zharradan Marr's ultimate fighting machine: a majestic sky-galleon with billowing black sails which caught the wind and drew the vessel smoothly through the air. As a spectacle, its magnificence was unsurpassed. Those on the ground who saw the Galleykeep pass above believed they were watching the gods themselves sail past. As a transport vessel it could carry a thousand troops or as much cargo as passed through the Trolltooth Pass overland in ten weeks. As a battleship its power was awesome: it could be attacked only by cannonfire or by using flying creatures - indeed it was Marr's trusted flying Tooki troops who had captured the Galleykeep in the first place. And it had an impressive range of deadly weapons, such as trident cannons and potash balloons, which were unique to the Galleykeep. Trolltooth Wars, Steve Jackson. 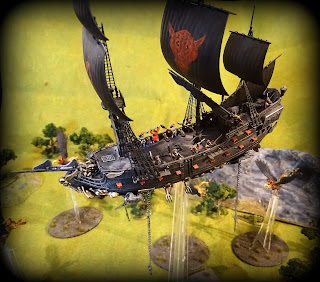 Luckily in the end painting the thing, which had threatened to be a rather daunting job, turned out to be fairly straightforward! Taking the few clues as to the colour scheme from the text, I chose black as the predominant colour - what else for the great Necromancer! 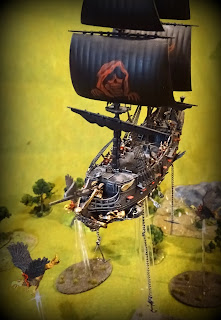 As for the ornate detail on the underside of the hull, I figured it would act like rather decorative armour from anti-aircraft fire and painted it in golds and silvers. 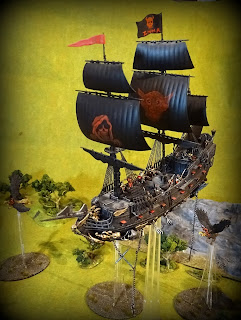 A few accent colours of red on the gun ports and detailing on the sails relieve the monotony of black - I did my best to recreate Russ Nicholson's brilliant designs on the sails, which perhaps took the longest to do. 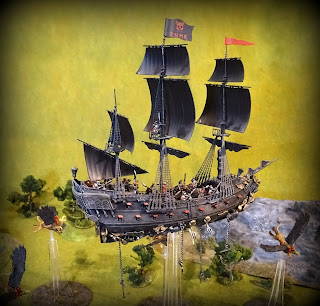 As mentioned in the last post, I felt the ship looked a bit empty for a huge battleship that could carry a thousand troops. This was a great opportunity to get hold of some of the only Rhinomen that looked kind of how they appear in the gamebooks - the only problem was that they were 15mm and unusable as groundtroops.

East Riding's little Rhinomen, however, worked out pretty well on deck! If I was being really picky I'd have preferred them to be 6mm but beggars can't be choosers and I think they give the impression that the ship is actually inhabited and crewed quite well. 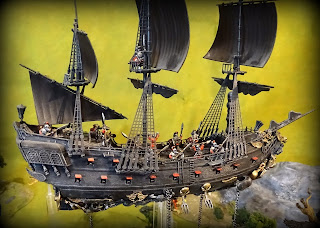 I even found a little Vallaska Roue to stand on the poop deck (look carefully and squint and you can just about see him!) - he was from Laran Miniatures' 10mm Evil Men range I picked up from an Indiegogo they ran ages ago. Another project waiting patiently for some attention! Zharradan Marr is of course tucked up safely in his magic mirror on the wall of his cabin. 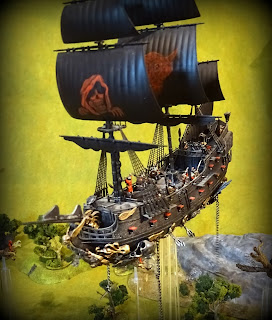 Now obviously building and painting the thing was a reward in itself and it was lovely getting all the positive comments when folk saw it out on the table but I was really chuffed to actually win a prize with it! 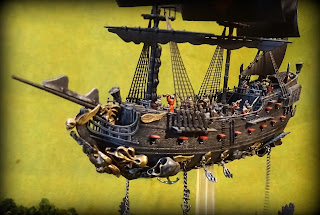 On a whim I chucked it into the painting competition at last year's BOYL, or at least stood it to the side of the cabinet as it was too tall to fit inside! Thanks to the lovely judges who's first challenge was to work out whether it was in the competition or not as I had also forgotten to put an identifying ticket on it as well - D'oh! I'm glad they persevered as it was awarded Judges' Choice!

And what was the prize I hear you ask? Well, some very generous vouchers to spend with Foundry which I think I put to good use... 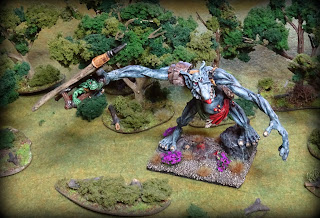 I'd been eyeing up their Giant Trolls for some time now and needed something to represent a 4th edition Goblin Doom Diver catapult for Daves Big Birthday Bash. Anyway - that's for another post! 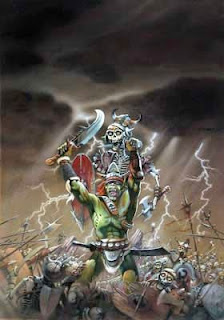 So this is the end - I'm all caught up with my Trolltooth project and it just leaves me to say what a great, if rather slow project it's been! It's pushed my modelling and converting skills far more than anything else I've done and has been a real trip back in to my childhood and yours as well hopefully. If you missed the game reports first time round you can find them here and all the posts, new and old, are listed under the Trolltooth and Fighting Fantasy labels on the left

The Rain of Death - Ambush of the Cunnelwort Caravan.

The Raid on Coven

(For you completists who know the story well, we decided to skip the skirmishes during Marr's blockade of the Black Tower in favour of going straight in to the big finale!)

The Battle of the Pass

And five years was all it took to play!

So where to next? Well it's not the last you'll see of this army - not after this much time and effort went in to it! Various units will certainly end up moonlighting in Warhammer games, whether it be in the armies of Chaos, Lustria or Cathay and the Galleykeep scales quite well with 10mm Warmaster. 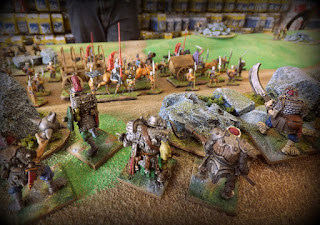 As you may have noticed our final game didn't quite end the same as the novel and I'm well up for a rematch some time in the future - just as soon as I've got over the pain of watching my newly painted Rhinomen turn tail and run!

It'd be great to run this as a participation game at BOYL as well - something Paul and I originally envisioned for the project was to take it out to Wargame shows to showcase Oldhammer. Should Paul find himself busy, I reckon I have enough Orcs and Goblins to cobble together Dire's Hillgoblin army, although it'd be nice to start collecting a bunch of non warhammer Orcs to make my own horde of Chaotics and I was most jealous of the fun Paul had in converting up Dire's Chaos creatures... or does that way lead to madness?!