One of the big things for me that really makes wargaming enjoyable is the terrain on the table top. Not only does it add to the whole spectacle but it often enhances game play and adds new tactical dimensions. In fact the whole narrative of a game can centre on a particularly important piece of terrain and the desperate struggles to control it.

Now most of my terrain is geared to Warhammer Fantasy as that is what I've played most of over the years. Happily much of it has been usable in Rogue Trader games as well - I still plan on playing an RT Siege game one day with Imperial Army units assaulting the Mighty Fortress, defended by feral and Space Orks!

Epic poses a slight problem in that you have to create a new set of scenery to cater for the much smaller scale. I've got by in the past with just plonking down the card buildings on my grass mat and getting on with it but that's always bugged me a bit - where are the streets and roads that make the presence of massive gothic sky scrapers on a grassy plain believable?

The secrets of Titan construction are shrouded in the mists of time. There are even those who believe that they were not manufactured; that these monstrous machines are the Emperor's very will, manifested in cold plasteel and adamantium. That these ancient machines blaze with a machine life of their own is well known amongst the Adeptus Mechanicus. Indeed each Princeps' first challenge is to attempt to master the fierce spirit of his Titan, lest he be consumed and the machine run wild.

Though the knowledge of their forging is lost and though many and varied are the rituals and incantations involved in preparing a Titan for battle, fret not dear reader. I have anointed myself with the sacred unguents, lit the incense and chanted the litany of awakening, More to the point I have solved the complex mathematical algorithms involved in working out points values for different Titan builds according to the Codex Titanicus!

They've all got it - Entropy! 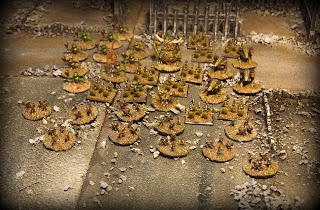 Up Close and Personal

The Imperial Guard are not exactly renowned for their ferocity at close quarters in general. However I was rather pleased, after I'd had a root around my Epic bitz box the other week, to find that somehow I had acquired enough troopers to form an Assault Company and an Ogryn support detachment! 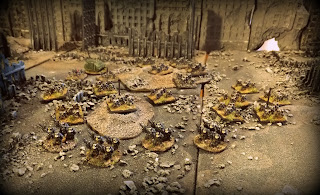 In a war torn galaxy, full of such terrors as Daemons, Ork Nobz and all manner of Tyranid beasties, it seems there are still men out there who are willing to strap a jet pack on, holster a pair of Laspistols and get up close and personal with whatever Xeno threat they are facing - with not a scrap of power armour to be seen! 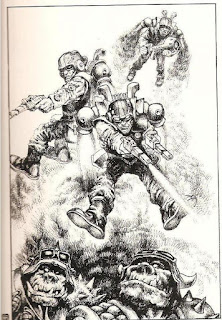 Ogryns have always been a favourite of mine and I still covet those excellent Rogue Trader Ogryns sculpted by Bob Olley. In 2nd ed. Space Marine they are pretty nasty in close combat with a big CAF of 6 and they even get a saving throw of +6. Their Ripper Guns may only have a range of 10cm but they do have a -1 save modifier. Led by their Bonehead - a relative genius by Ogryn standards thanks to the brain surgery performed on them, Ogryns make great shock troops as long as they survive long enough to get stuck in. I do like their childlike faith in the Emperor, believing that each of their orders, no matter how trivial, has been personally issued to them by the Emperor himself! 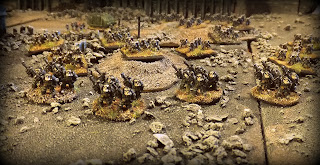 I'm looking forward to trying the Assault Company out in the next game I take the Guard to. Not sure how effective they'll be with their terrifying CAF of 1 and it's quite a small Company by Guard standards at 15 stands of troops with the usual 2 command stands and Rhino. It'll certainly make a nice change to have my infantry bounding forward at 30cm a turn on charge orders and ignoring terrain thanks to their jet packs! 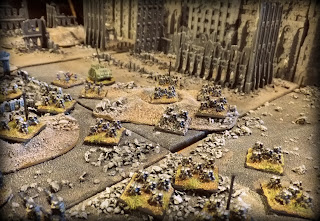 Oh and the thought of 75 lunatics, plucked from the depths of some god forsaken Hive or Barbarian Feral world and given uniforms, training and rocket packs, coming screaming out of the air at the enemy is pretty cool too!

Something a bit different today and something I was much more excited to receive than chocolate eggs that's for sure!

This not so little beauty (the parcel was huge and pleasingly heavy) was waiting for me when we got back from a very pleasant Easter weekend with the family. Yup - one of the Kick Starters I backed finally came good. Well almost.

Lone Wolf - The Battle for Magnamund was and still hopefully could be a really exciting table top game set in the world of Lone Wolf. Gary Chalk has produced some beautiful new illustrations for both the board pieces and the card miniatures and after a first glance at the rules, the game itself looks like it has plenty of potential. 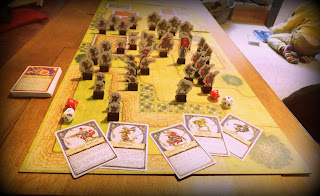