The word evokes mystery, romance and travel - half remembered tales of Marco Polo and all the riches of the exotic East, accompanied by the almost hypnotic and sultry melodies of Duke Ellington's masterpiece of the same name...

That is unless you've spent a rainy weekend in Skegness in one or you're preparing to play the Hobgoblin side in the Dolgan Raiders scenario... 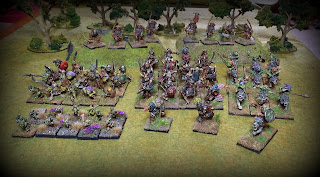 Following on from my post on the Lesser Goblins, I thought I'd have a bit of a sort out and see what I had painted up and ready for the scenario. I'll be taking on Bagnol's Hobgoblin Caravan and my good friend Richard will be taking command of the Dolgans. Covid19 will be deciding when we play the game!

Those of you who followed my rather long journey through the Orc's Drift scenario will know that I like to get the old scenario miniatures on the table, although I'm not too fussy if they prove too hard to find or expensive - which reminds me that I have an Ozrim Chardz that needs painting some time! Anyhow, I was rather pleased to find that I already have several of the miniatures that were sold as part of the Dolgan Raiders deal back in the day. My thanks to Quendil for sharing his collection on his blog and the Oldhammer forum - a great reference to work from! Blackeye, the Hobgoblin shaman is on the left in the pic below and Bagnol, the caravan leader, is on the right. 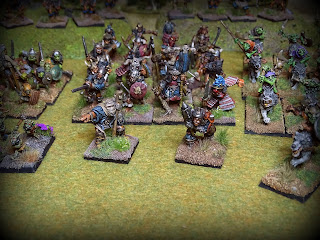 We've already heard from Bagnol in the last Dolgan post and seen he's not the sort of chap to mess with, especially if you're a lesser goblin! He is described thus,

The Caravan is led by Bagnol the Hobgoblin. Bagnol is not exactly popular with the other goblinoids as he has managed to get them lost, and it looks like he's about to get them killed. However, he is a very good fighter and should provide the others with a vital source of strength. He wears chainmail and carries a shield as well as his double handed war-mace.

Blackeye is a more mysterious character - both because of his enigmatic headgear and the fact that there's not much about him in the scenario's background. All we get is,

Blackeye is the goblinoids' shaman and, luckily for them, a powerful wizard.

He is a level 2 wizard with some very useful defensive and offensive spells.

The other character is Gutrot, leader of the Goblin wolf riders, hired for the purpose of scouting ahead and providing protection to the caravan from raiders such as the Dolgans. 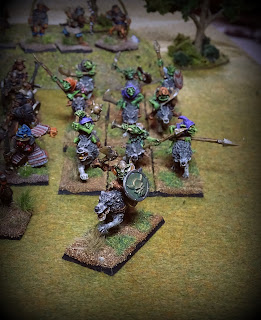 Gutrot is the biggest challenge to Bagnol's authority and, as in many of these old scenarios, if there are two players splitting the goblinoid forces between them, there is a big victory point incentive for the player who controls Gutrot to kill his Hobgoblin rival!

That night, when the Hobgoblins had laagered their wagons, a meeting was held, similar to the one being held simultaneously in the nomad camp - but perhaps a little more rowdy.

"I'm boss and I'm still in charge," shouted Bagnol. "I'm the only one who's been this way before."

"And the one who's got us all lost - you useless pile of donkey dung!" bellowed Gutrot.

With that the two leaders fell upon each other, kicking, brawling and yelling until an amicable decision was reached. Bagnol, leader of the caravan and Gutrot, leader of the wolf riders, both agreed to keep out of each other's way. Then everyone got drunk and even the guards collapsed in to a stinking pile. And so it was that come the next morning, the Hobgoblin wagon laager found itself surrounded on all sides by Dolgans. Drums sounded, trumpets roared and domestic animals brayed pitifully.  The lesser goblins quaked and whimpered while their larger cousins strapped on iron and took up defensive positions within their small wooden fortress.

Bagnol's forces consist of twenty Hobgoblin warriors, ten Hobgoblin archers, twenty Goblins and ten lesser goblins. Gutrot commands nine goblin wolf riders and Blackeye no doubt suits himself.
I've tried to include Goblins from as many different ranges as possible in order to stick as close to the description in the scenario - bonus points to who ever can spot the most!

There are also twenty ill-assorted camp followers, females and youngsters. These are of many breeds and half breeds, but should be treated as normal goblins. 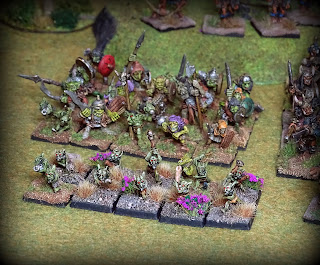 So that's most of the minis covered - I just need to paint up a few more archers to get them up to strength and I intend on adding the sole trooper I own from the first iteration of Grom's Goblin Guard, seeing as how that was the goblin model supplied with the original scenario deal. 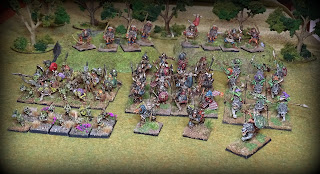 There is of course the by no means small matter of the wagons and the lobotomised ogres pulling them. I have the wagons ready to be built and the ogres are ordered - so watch this space...
Posted by Thantsants at 10:16