So on to the last creatures in the monstrous menagerie that Darramous commands at the battle of Trolltooth Pass - the Blood Orcs. 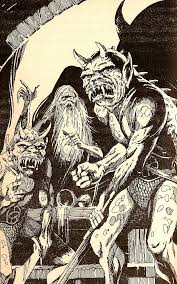 As soon as you enter the room, two Blood Orcs - warty creatures with powerful jaws and piercing front teeth - get up from a table and grab their swords. Creature of Havoc, Steve Jackson, illustrated by Alan Langford.

Yet again (running theme here) there is a dearth of information on this strange breed of Orc, probably because they are another of Zharradan Marr's creations, through either magical experimentation or breeding, found only in his dungeons or his armed forces - or perhaps as gaolers or wardens of the disgraced and former mine overseer, the wizard Hannicus, punished with a curse of blindness, as pictured in the above illustration. 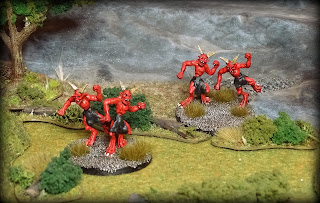 They are described as being a deep maroon colour with mouths full of large protruding fangs and small horns coming out of their heads. One wonders whether there is a little demon in them in terms of lineage or magic? 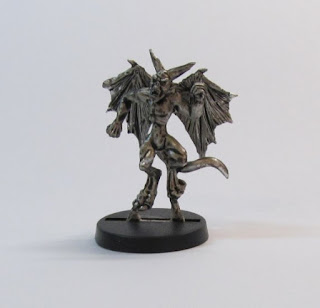 With that in mind I felt that the Winged Demon from Ral Partha's Die Grauzone range was a good match - some similarity in facial features, horns, about the right size and as the wings were separate pieces, easily converted. All that was left was to remove the tail and make them decent with a green stuff loin cloth. The Blood Orcs also feature in Zharradan Marr's airborne troops, riding the Tooki (trained war Griffons) that escort his flagship, the Galleykeep. In fact it was these highly trained troops that ambushed and captured the flying ship for Marr in the first place. I'll do a separate post on those chaps later but in my mind they represent the more intelligent (or more biddable!) examples of the species. The Blood Orcs rubbing shoulders with such brutish creatures as Clawbeasts and Devourers must be their more savage and unruly kin - either Marr's magical experiments or Daramouss' flying school can't have a 100% success rate! That's why I left them unarmed to suggest their more bestial nature and as they were a lot more smaller than the other creatures in the pack, I decided to mount them two to a base to kind of get a kind of swarm effect. 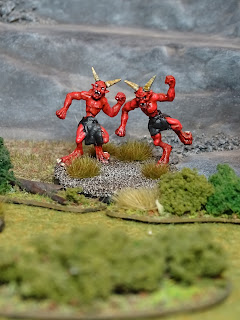 Nice to give the fur a rest and they certainly add a splash of more exotic colour to the group!
Next I'll be looking at Darramous himself and the Soulless Ones he commands in battle...