Next up in Darramous' revolting roll call is the Devourer!

The thing that strikes you is the smell of rotting flesh. Whatever lives in here certainly has a large appetite for meat. You poke your head further in to the cave and you can see a large furry ball heaving up and down in one corner. You step forwards to catch the creature unawares. But your foot kicks a loose stone and sends it scuttling across the cave towards it. The creature shudders, awakens and gets up. By now you have decided to attack and you are virtually on top of the creature as its face turns towards you. 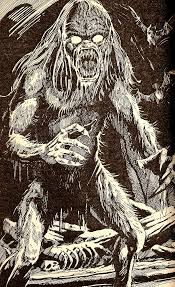 There is a look of pure fury in its ghostly white eyes as the Devourer opens its mouth to defend itself. Two layers of jagged, blood stained teeth part and sink in to the scales on your arm. Creature of Havoc, Steve Jackson, illustrated Alan Langford.

The Devourer is another Fighting Fantasy monster that there isn't a ton of background on - possibly because it is again another result of Marr's terrible Marrangha experiments. I think the only place they show up in is Zharradan Marr's dungeons in Creature of Havoc and as part of his army in The Trolltooth Wars. The key details are their ravenous appetite, two rows of sharp teeth, white eyes and a bit of a resemblance to a Bigfoot! 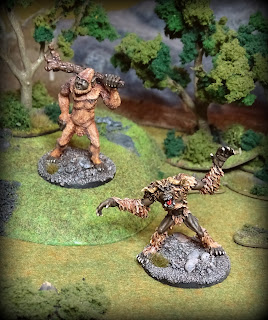 Thanks go to Ral Partha once again and the two minis I chose represent the creature in passive and agressive mode. The Yeti from the Schwarse Auge range looked a good match in terms of face and body shape - hopefully the white eyes are enough to make it look like a Devourer before it has its dander up! Nice characterful mini and another good opportunity to practice shading on large areas of fur. 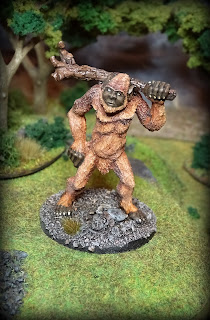 I couldn't not get this next mini to make up the pair -the Ice Troll from the Grauzone range is unmistakable as a Devourer in full "Get in my belly" mode! He may have horns and a bad case of alopecia in comparison to his colleague but hey - not everyone has a good time being the result of magical experimentation at the hands of an evil Necromancer! Hopefully the colour scheme and superficial likenesses are enough to identify the two as being of the same species. 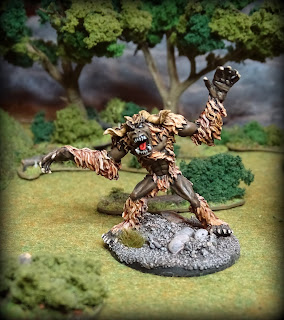 Another fun addition to the army and a nice relief from painting large units of infantry - next up the Blood Orcs...
Posted by Thantsants at 02:11