Well I've certainly been busy since finishing the painting minis side of things!
After I'd written down all the "little" jobs that needed doing to get ready for playing the scenario I soon discovered I was nowhere near out of the woods in terms of work for this project....
Talking of woods, I thought it was about time that I finished off the Woodland scenics realistic trees I bought ages ago and now I have 11 more to make up a veritable forest on my table. While I had the clump foliage out I thought I may as well make a load more underbrush bases too, which you'll spot dotted about in the following pics.
Placed an order with Amera and for under £20 (if memory serves me right!) I got my hands on 2 small and 1 big hill. The big hill is large enough to glue one of the small hills on top to create a 2 tier hill as you can see on the right in the pic below.
I also put a bit of gloss varnish on the river sections which I had forgotten to do earlier...﻿ 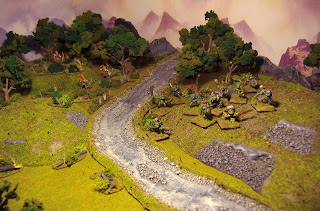 Talking of Amera - while I like the ruined wall sections I bought from them ages ago, they don't fit together very well to form a well kept boundary - being ruined and all! As I cast about for ideas on making a better stone wall, I remembered the bag of  Hirst Arts fieldstone blocks I bought on a whim on ebay for a couple of quid a long time ago. Always pays to hoard stuff away as I had enough bits to make a load of wall sections as seen below!
Also pictured are two carts - also ebay purchases from ages past. Not sure who they're from but they'll do nicely for the final showdown at Orc's Drift... 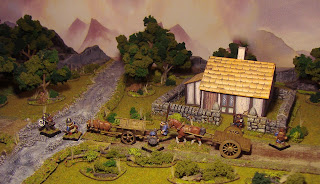 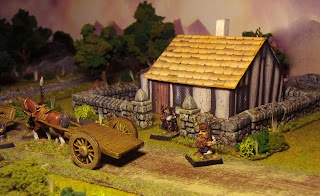 ... as can be seen below - just what Ferndale Snart needs to evacuate his patients!
I've also painted up the mealie bag defenses I got from Redoubt Miniatures (along with some Zulu and Rourkes Drift characters for a future project!) and purchased a set of the brilliant barricades that Ainsty sell to complete the defences prepared by Osrim Chardz's Dwarf engineers. 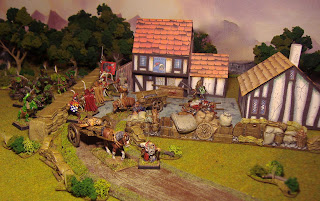 ... and that's not all folks!
Got a few WIPs I thought I'd share -
Log pallisade section test piece for the garrison at Kachas Pass - inspiration taken from SIlentInvaders fantastic ACW log fort on the LAF. 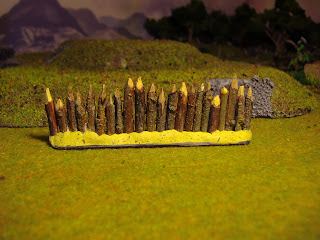 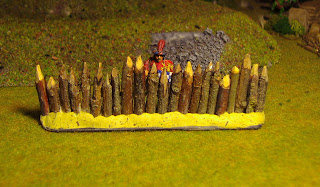 Not terribly exciting this one - just some fencing sections to go round the animal enclosures and suchlike from the scenario...﻿ 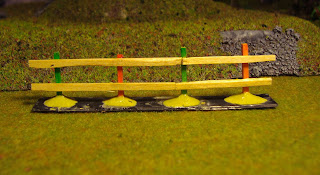 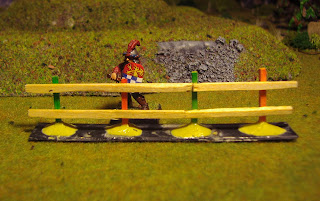 This next one's proving to be a bit of a head scratcher - I need several sections of drainage ditch for the Ashak Rise scenario. The only way I thought of modelling it was to suggest a depression with the small bank. The only problems are that I'm not sure this will look right on the table and that the sections are going to have to be rather wide for a ditch to fit 25mm slotta bases in them - should any Orcs feel the need to jump in...
Let me know if any of you has any brighter ideas!
The sections, by the way, are being made that short so they fit with the wall sections pictured earlier. 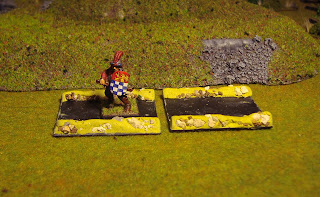 And finally - quite chuffed with this one - is the mountain tarn. Plasticard base, milliput banks and stones out of the plant pots in the front garden! I was going to have a go at adding the water today with the EZ water effect pellets I've got, but chickened out in the end! You have to melt the pellets down and pour it in one go to avoid it setting and creating lines where you don't want them and, as this was a large area with a winding and shallow stream coming out of it, I thought I'd play it safe! 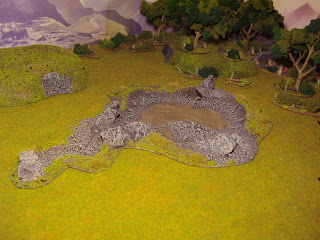 So I ordered a big bottle of woodland scenics realistic water from Antenocitis, which happily is discounted at the mo! I've heard it has its problems with shrinkage and the like, but the beauty of it is that it pours straight from the bottle and is a bit easier to control. Also saw a good vid on making ripples with it so may have a go at that too...﻿ 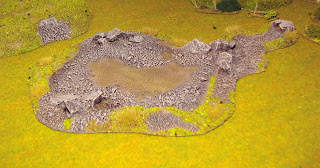 The time for battle draws nearer as the to-do list diminishes!
Jobs left -
finish fencing
add water effect to the tarn
dig the ditches
make a hedge
finish the pallisade
Posted by Thantsants at 16:30 2 comments:

Good tune that from Talking Heads and its been doing the rounds in my head all week, while I've been painting these river sections up!

Nice little set this from Magnetic Displays, although I may have overegged the amout of talus and other stuff as all that pva keeps distorting the rubber as it dries and doesn't let the piece sit totally flat on the table. Bit of bending here and there seems to have done the trick in flattening them out mostly...

The river comprises of 2 curved and 2 straight sections 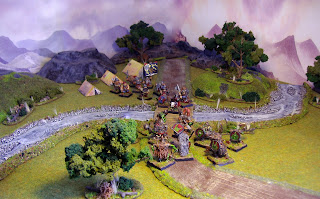 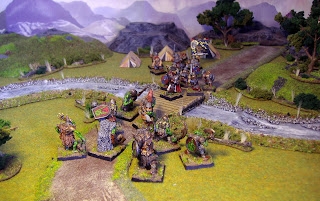 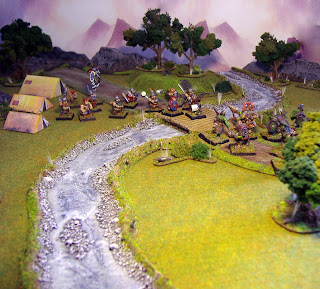 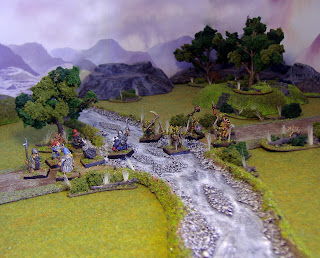 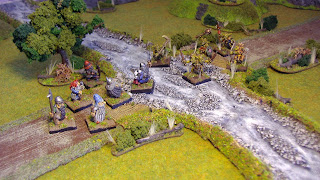 Next - another water feature in the way of a shallow lake and boggy area...
Posted by Thantsants at 08:46 No comments:

You mean your only plan is to stand behind a few feet of mealie bags and wait for the attack? 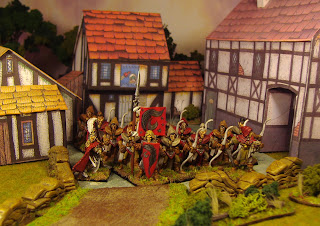 Just put the finishing touches to the thin red line that is Brommedir's Bows and with that I have officially finished painting all the minis I need to play Bllodbath at Orc's Drift! 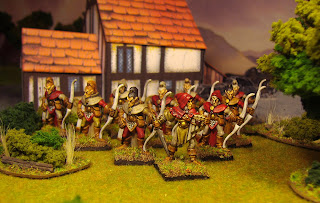 Sound the fanfare, beat the drum, cry Hallelujah and get busy with the fizzy - I'm done!!!


Of course there are a few recent acquisitions I'd pegged to replace some minis already painted up in various units cos I liked them better, and obviously I'll be painting up any of the other original character minis  if I can lay my hands on them before I get round to playing the scenarios - however as I am now in a position where I can play the damn thing this seemed as good a time as any to wrap the mini painting side of things up. 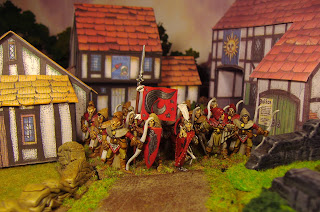 There are a few bits of terrain I need to get done yet - a lake, some more trees, bushes and fences, and a nice set of rubber river sections I picked up from the Magnetic Displays stand at Vapnartak earlier this year.
Should make a nice change from squinting down my brush at little lead men...
Oh nad mustn't forget the big group shot!