Trolltooth Wars: What Tooki So Long?

Slight change of plan as I realised there were a few more shots I wanted to take of Darramous and the Soulless Ones so instead today we have the Tooki - which have taken me quite a while to get on the blog, as with all this Trolltooth stuff! 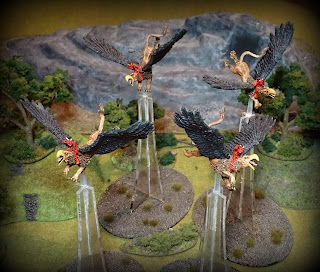 Warning - spoilers in the next quote from the end paragraph of Creature of Havoc in case you haven't played it or you're (still) not aware of the twist ending! 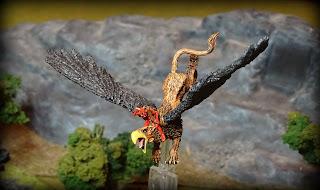 As your memory returns, you remember the bitter struggle over the Moonstone Hills, when Zharradan Marr and his winged Tooki forces bore down on your Galleykeep in overwhelming numbers. Like a raging stormcloud, the dark Tooki - a specially bred race of War Griffins - swooped down on the ship, their mounted Blood Orc archers raining arrows and killing many of your crew. The surprise attack was so quick and so deadly that you had no option but to surrender. As Zharradan Marr stepped down off his own richly adorned Tooki on to the deck of the Galleykeep, you swore you would avenge this defeat... Creature of Havoc, Steve Jackson 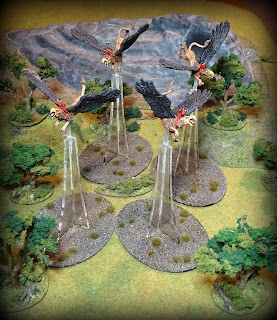 The above excerpt recounts how Marr, with the aid of his War Griffins, captured the Galleykeep, a magical flying ship. The ship was to be instrumental in his plan to search for the well hidden Elf settlement of Stittle Woad and the magical knowledge Marr wished to take as his own. 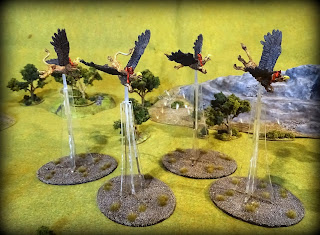 The Tooki are another fun addition to Marr's army, providing not only great variety in painting and modelling but escort duties for the Galleykeep and air support for the legionaries on the ground in the game. They were a little tricky to photograph so hopefully the pics have come out alright - plenty ended up on the cutting room floor! 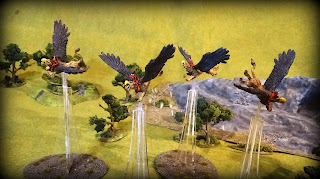 As with all the forces I painted up for this project, we scaled down the numbers mentioned in the novel to make the game more manageable. Marr has a dozen Tooki flying with the Galleykeep at the battle so I figured four would be a good number to take both in terms of aesthetics and affordability! 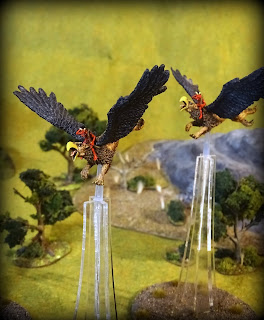 When I get on to the Galleykeep you'll see I've used a smaller scale to suggest, through forced perspective, that the ship is flying high above the ground and is in fact much bigger than it actually is. 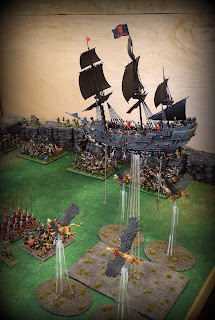 The models I chose to represent the Tooki go some way to adding to illusion. The Griffin, another model from Ral Partha's Dark Eye range, is fairly diminutive when compared to the huge monsters that Empire heroes rode around on in 4th edition Warhammer. Mounting them on such tall flying bases also helps a bit! 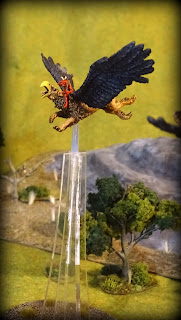 I'd scratched my head long and hard over a suitable rider that would resemble the Blood Orcs you saw in the last post and even considered using that winged Demon model before I'd contemplated the forced perspective thing. I think I'd searched for riders, or something along those lines, to see what minis Ral Partha had, that were already in a suitable pose for sitting on a mount, when I finally spotted the Lesser Goblin wolfriders. 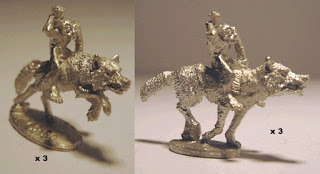 I think I'd got these guys mixed up with the C14 Lesser Goblins I posted a while back and thought they were part of the same series. There are a couple of the foot versions based up with my actiual old C14 Goblins if you look closely at the front rank of the Goblin unit! Not sure what the pedigree of the wolf riders are - whether they were an old Ral Partha line or whether they were ever associated with Citadel? Anyhow, the whole range seems to be available at Ironwind and just the cavalry at Ral Partha. Luckily they fit on the backs of the Griffins beautifully and with some bits of paper clip drilled in to their heads for horns and a nice coat of red paint I think they look the part! 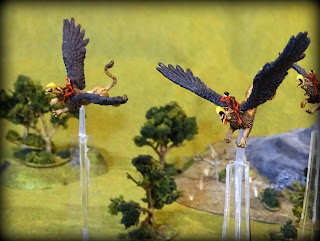 Hopefully my painting (the boring kind!) and decorating chores won't stop me from getting the extra pics I wanted of Darramous and his zombie horde for the next post...