I think the latter personally! Darramouss is certainly not one of the more pleasant characters you can meet in Creature of Havoc and is a capable and cruel overseer of Zharradan Marr's gold mines. 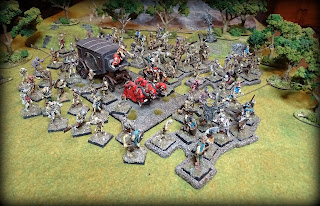 Zharradan Marr has a fairly small staff of trusted Lieutenants and Darramouss is certainly one of them. Another recruit of Vallaska Roue, he is brought in to replace Hannicus, a Human wizard whose lax supervision of Marr's gold mines had enraged his master.

Vallaska Roue had returned from Port Blacksand witha sly grin on his face. He told of an encounter with a creature with exceptional qualities. Marr listened intently as he heard of Darramouss, Half-Elf and one of the undead. According to Roue, he was a ruthless creature, who was totally without remorse and who took pride in torture and torment. As an officer in the army, he was known as one who would always welcome the order to kill prisoners. When this order was given he would first torture them for his private pleasure, then kill them. Marr liked the sound of this creature and liked him even more when the tall figure walked in to introduce himself. Creature of Havoc, Steve Jackson. 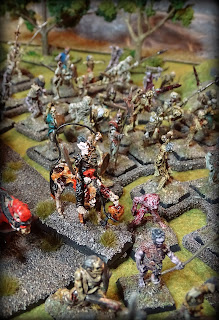 Darramouss soon garnered Marr's praise thanks to his efficiency and devotion to his work,

Darramouss was immediately given the job of master of the Yellowstone Mines, a position he excelled at. His first act was to end the system of paying the miners for their labours. From that day on they were his prisoners, and guards with bullwhips made sure that the miners were putting in their best efforts. When many of the miners had died, he had Thugruff scour the countryside with his army to bring in more slaves. So successful was he that Zharradan Marr soon put him in charge of his whole underground operation, after making sure that the old fool Hannicus would offer no resistance. Creature of Havoc, Steve Jackson.


Good old Ral Partha came up trumps again with a suitable mini to represent the undead Half Elf on the battlefield. This Dark Elf from their Fantasy Adventurers line bears a striking resemblance to Russ' brilliant illustration - in hindsight, I realise I forgot to model an eye patch on him... 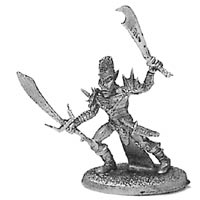 As I had done mounted versions of Marr's other officers, Thugruff, Tanka Sun and Kravaak, I figured Darramouss had better have a ride too. To that effect, the pleasantly titled Zombie Lord on Carcass Stallion (Ral Partha, Dark Eye range) kindly yielded his legs and mount. 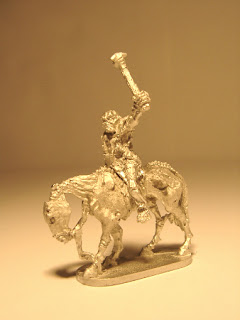 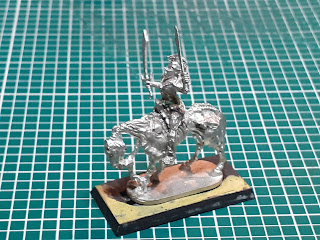 I decided to swap the Dark Elf's rather spindly second sword with a whip - fashioned out of a bent paper clip if I remember correctly. If you're in charge of a load of beasties then you definitely need a whip! 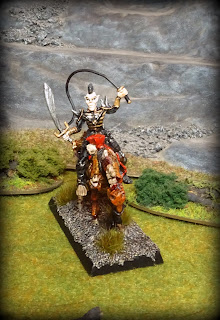 The stallion carcass was quite fun to paint, if a little grizzly. As you'll see when I get on to the Soulless Ones, I was quite liberal in my use of the old Tamiya Red for blood effects! 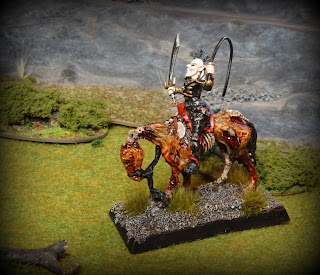 The only slight niggle I have with the model is the bare foot on his right hand side. I maybe should have painted it black like his right one! Perhaps I'll sculpt a boot over them some day. 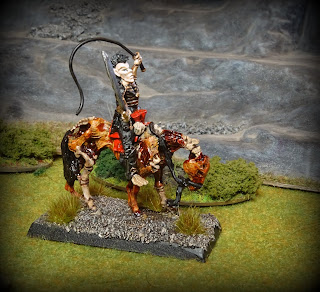 I felt like the wooden cart that all Darramouss' creatures are tethered too as the column marches in to Trolltooth Pass could be something a little more exciting than a simple wagon. This passage gave me a little inspiration,

The figure at Thugruff's side had been silent all night... silent, that is, apart from the rhythmical clip-clop of his horse's hooves. Several times Thugruff had turned towards him to offer water, or conversation, but neither had been accepted. Instead the ghostly creature simply stared ahead, wide-eyed and unblinking. Thugruff wondered what his companion's thoughts might be. 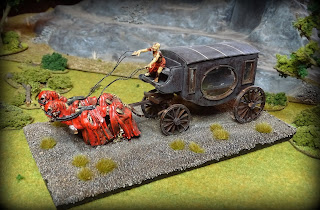 But no one knew for certain whether any thoughts at all passed through the mind of Darramouss, the keeper of Marr's dungeons. The mysterious Hal-Elf had been summoned to join Thugruff and to bring with him some of the creatures under his command. Though he obeyed the order, he disliked being in the open air and hated the sunlight. His dry skin, stretched tight over his bones, felt uncomfortable in daylight. He preferred the cold and damp of his underground domain. The Trolltooth Wars, Steve Jackson 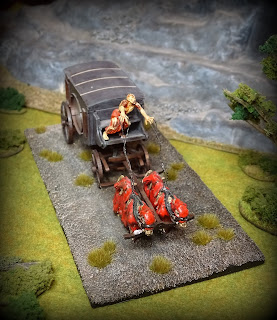 So I decided that Darramouss would probably want to travel in a hearse, when he's not joining his brother officers on horseback! 4Ground provided this rather nice vehicle with plastic glass sides and swinging doors on the back. Never got round to finding or making a coffin to go inside so there's another little job to do.

Mind you I'm not sure how restful that would be with this lot chained to the back of it!

I think I'll give the Soulless Ones their own post as this one is probably long enough as it is and, depending on your thinking, maybe kind of fitting to be discussing zombies that have risen from their grave over Easter weekend!
Posted by Thantsants at 02:40