Hmmm, this is getting a bit of a habit - posting up pics of my latest addition to the Tale of Four Gamers challenge on the last day of the month. This won't be an option next month as there's little chance of me being sober enough to hold a camera straight let alone a paint brush! A little more organisation is called for methinks... 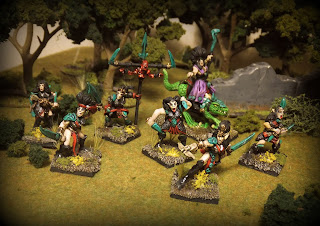 I certainly am having just gone for the Full Monty in 4A Miniature's second Kickstarter!

Tale of Four Gamers: Nerves of Lead - The Jaded Sisters

Well that was a busy October in (non hobby terms) and a sprint finish in the last week (in hobby terms). My entry for the Tale of Four Gamers this month only just squeezed in thanks to a last minute post on Facebook at 23.59am of the last night of October!

This tardiness was mainly due to being distracted by preparations for this year's Night of the Living Lead which I attended last weekend - more of which in another post - and being distracted by shiny new models at the Foundry - namely the titular (in more ways than one) sisters who will be joining my Dark Elf army as L5 Heroines equipped with heavy armour, double handed weapons and poisoned attacks. They weigh in at 112 points which along with the 34 points overspend from last month means that I'm only 4 points shy of the 150 points target. I guess I'll be finishing the unit of Crossbows I had been working on another time!

Anyway, enough of the boring points stuff - on with the juicy background! 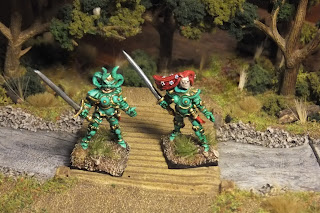 Twin sisters born in to the Nephrite clan, Calemirnith and Calemirthel were inseparable despite the stark differences in their characters. Blessed with a cold beauty, Calemirthel soon became renowned as quite the prize amongst the nobility of Ghaba Ghanaf. Of course anyone foolish enough to consider her a trophy for the taking would soon be disabused of the notion.


What Calemirnith lacked in the terms of her sister's beauty, she more than made up for with her savagery and appetite for depravity. Her reputation went before her and all quailed at the prospect of becoming the object of her callous desires.

In fact the sisters made it their personal goal to sample all the sensory pleasures that cold Ghaba Ghanaf had to offer. No act was too base and no whim too perverse. And yet it was not enough. With much of the nobility, eligible or otherwise, dead or crippled and the city's slave population decimated thanks to the sister's tender mercies, the Elders of Ghaba Ghanaf certainly breathed a sigh of relief when they halted their reign of lubricious terror, jaded and weary of such things.

However accusations of heresy were soon levelled at the sisters and they were tried and found guilty of worshipping Slaanesh. In penance Calemirthel and Calemirnith were locked into suits of jade armour and forced to pledge their allegiance to Khaine. They were inducted into the fanatical sect of the Brides of Khaine and are now closely observed by their fellow Witch Elves for any further sign of heresy. 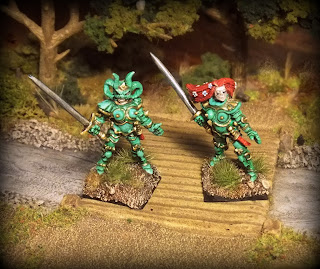 I'm currently painting up the small unit of Witch Elves for this month so they can keep an eye on the sisters although I'll need to throw something else in to the mix to make up the points for the 150 points target...