Welcome back dear readers and crikey - lockdown has actually turned out to be a really busy time! In between redecorating the entire house (we were in the middle of a loft conversion and rewiring all the electrics when quarantine was announced), home schooling, dog entertaining and baking fresh bread everyday I don't know where the time has gone. What started out as a throwaway facebook post on my take on home schooling has also turned out to be a bit of a time sink after various friends and relatives insisted I carried it on and turned my daily home schooling posts in to something more permanent - like another blog!

I'm pleased to say that my Ogre wagons for the Dolgan Raiders scenario are now definitely finished and what a fiddle they were too - should definitely have thought of sticking all the extra bits on (as helpfully suggested by Mr Street...) before painting them! 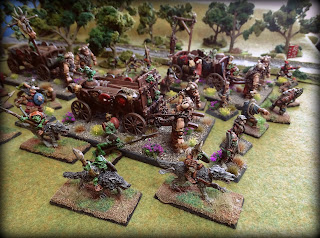 So first a few shots recreating the last ones I took but now with the finished wagons  - just for completeness! 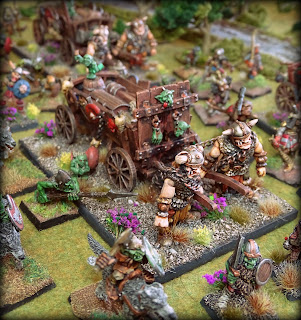 I had quite a bit of fun rummaging through various boxes in search of suitable bits and far too much fun sticking them on. 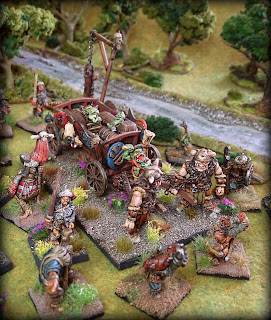 This post is mainly for eye-candy as I said pretty much all I wanted to say about the wagons and their part in the scenario in this post. 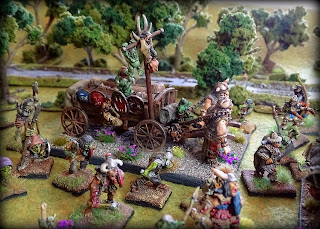 A fun lockdown game might be to guess the extra parts before I go in to more detail with each cart later on in the post... 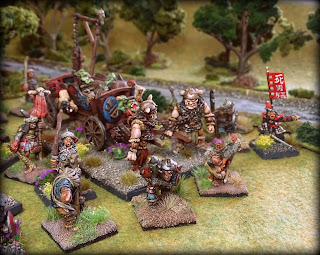 The eagle-eyed amongst you might have spotted some newly painted Hobgoblins and their Goblin lackeys as well - more on which later. 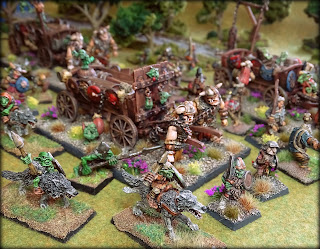 Right, that's about enough of that - on to business! 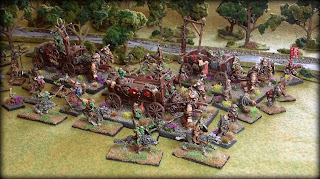 A few new additions have made it in to Bagnol's caravan and first up are two newcomers from the Fantasy Warlord range available at Alternative Armies. I've had my eye on the Eastern Orc Hero (on the right with the back banner) for some time for obvious reasons - lovely Eastern style and fits right in with my older Hobgoblins as a potential unit champion. The banner, inspired by one of the illustrated banners in the 3rd ed Armies book, says Death Man Thing in (probably) terrible Mandarin! 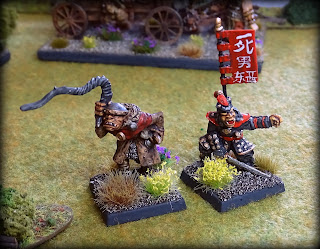 The pleasant fellow on the left is the Western Orc Discipline Master. I think with the similar paint scheme he blends in ok with his Hob-brothers and is certainly at home with the plethora of Hobhound handlers and Discipline Masters from the old Citadel range. 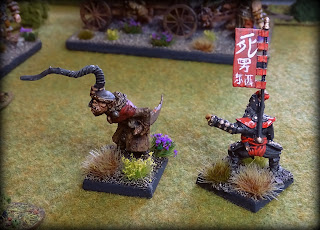 Whilst rummaging, I was rather pleased to find another two of the preslotta C36 Hobgoblins, one which a much needed archer. Lovely models and they paint up so easy! 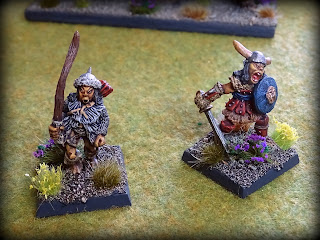 Another happy find was this lovely old Gnoll! I remember loving Goblin Lee's fantastic collection of Gnolls a while back so was delighted to find that I owned one - more diversity for my rag-tag bunch of Goblinoids. I mentioned the other chap last time but I'll say it again - it's great to have one of Grom's old troopers as a hark back to the minis that came with the original Dolgan Raiders deal! I suppose this is another Regiment of Renown I now need to track down and add to the collection... 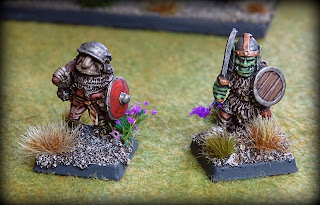 A bit of a closer look at the augmented wagons. I had the front of the lovely old Dwarf Machinerie of Destruction, Goblobber, lying about and it just fit the front of the cart too well not to use it - a stern reminder of Bagnol's authority or the caravan's pantry? 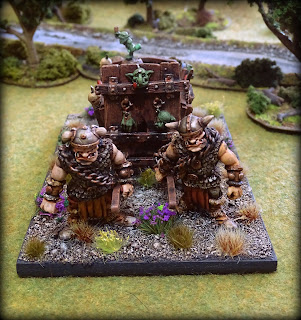 One year at BOYL, Foundry were selling their little Snorklings like Pick n' Mix and I'm glad I picked a bunch of them up! You'll spot a few of the little blighters getting up to mischief on each of the wagons! 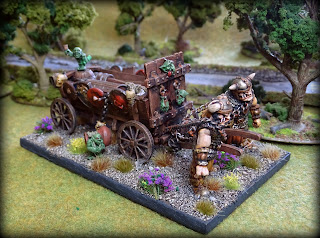 As Mathew pointed out so helpfully on his comment on my facebook post - the old card models had shields and all sorts of cool stuff all over them - you should do that on yours too! 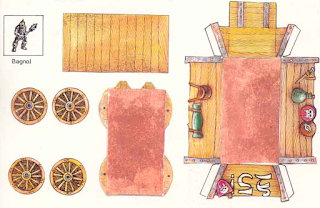 And quite right he was too - each wagon has a selection of shields and I think they really add to the models. 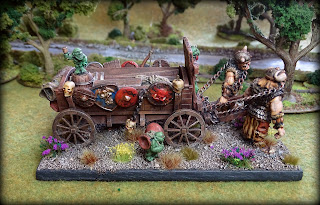 For the rolled up rugs and blankets I used disinfectant wipes rinsed out, dried and then rolled to the desired shape, slavered in PVA and added ties made of thread. 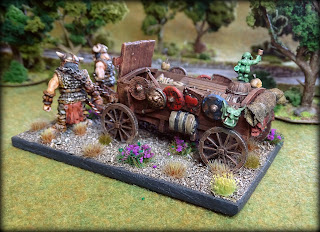 This wagon I decided was Bagnol's personal transport so it got a few special bits... 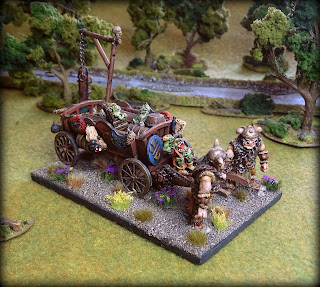 Those if you who had the pleasure of meeting and drinking with Geordie Mike at BOYL will know how pleased I was to find and include a Gibbet!! Not the most practical thing to have swinging of a wagon but it had to be done. As you can see from Bagnol's various grisly trophies from various past expeditions to Cathay and beyond, displayed on the side of the cart, he has proved the existence of the elusive Yeti. 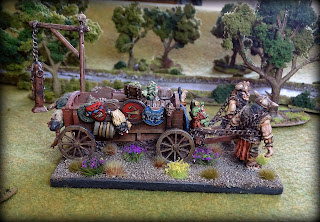 An army marches on its stomach and a caravan of ravenous Hobgoblins is no exception - Dolgan to go anyone? The Mantic zombie sprues proved very useful for Bagnol's "packed lunch". 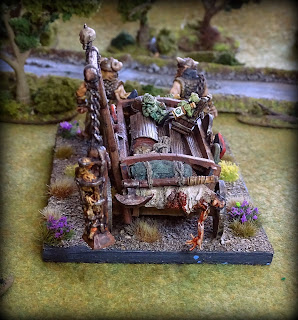 More Snorklings getting in to things they shouldn't... 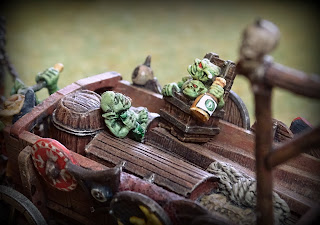 More shields and my attempt at some vaguely Mongol shield designs on the plainer ones. 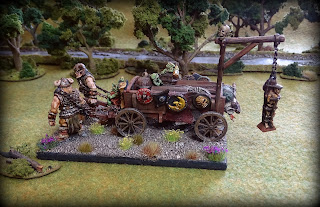 I seem to have ended up with a load of these Goblin Drivers from the Goblin King's Battle Chariot set and I figured the Ogres could do with some encouragement. 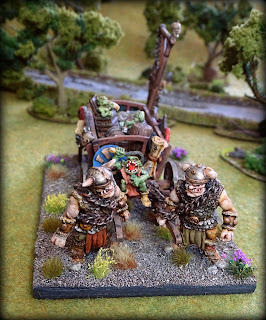 You might have noticed Bagnol's map tucked in behind the driver's seat - shame Hobgoblins aren't great at reading or he might have avoided the whole getting lost and surrounded by angry Dolgans business... 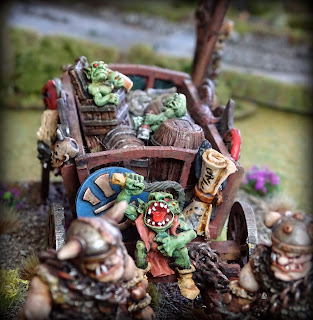 The last wagon also gets a Goblin driver and this rather fetching totem. 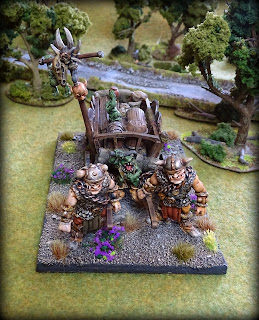 I forget where the banner head came from but I suspect it's from the newer Games Workshop Orcs - 6th/7th ed? A handy little piece that's for sure! I had to include a horse skull from the classic Skeleton Army box to warn of those pesky Horse Boys and the whole ensemble is set off beautifully with a spare head from Foundry's Warmonger range (one of Bagnol's old rivals perhaps?) and another Snorkling, who I had pegged for one of my Snotling Pump Wagons but fit the bill here nicely! 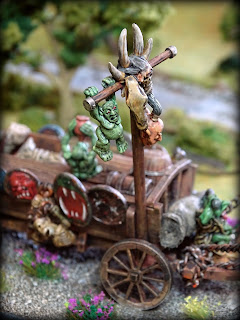 Some more classic Skeleton Army bits and a skull on a chain from the much newer Dark Elf plastic sprues. 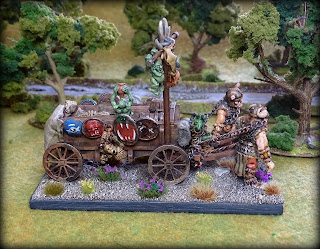 Looks like meat's back on the menu and of course we also have more Snorklings helping themselves to the grog! 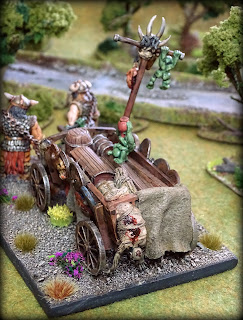 The rugs were great fun to do and it's certainly a technique I'll be using again on other projects. 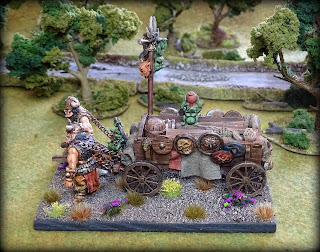 So there we have it - Bagnol's Caravan is all done and we just have to wait out this Pandemic to get the game in!

I've got a load of shots of my entire Hobgoblin army for my next post, although I'll need to shoehorn these wagons in to the now quite sizeable baggage train! Hopefully the army will be expanding in the future as I've invested in Satanic Panic's latest kickstarter - some lovely multipart Hobgoblins inspired by the old C36 preslotta Hobgoblins. The project will be funded having doubled the target and there's a very tempting bunch of stretch goals available depending on the pledge you go for. Eight days to go if you fancy jumping onboard! 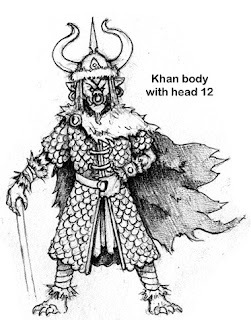