A Journey to the East

As BOYL 2015 looms ever larger on the horizon, I've been having a think about how the Journey to the East game might look on the table top.

All in all, Warlord Vidhal Timotei had had a very profitable campaigning season. Having absconded from the ranks of the Mournghul Horde and stabbed all his rivals in the back, Timotei had led his small army south from the Steppe, up into the Mountains of Mourn. From a lofty viewpoint in those inhospitable peaks, he led his savage Hobgoblin warriors in raid after raid against the hapless caravans that plied the Great Silk Road. 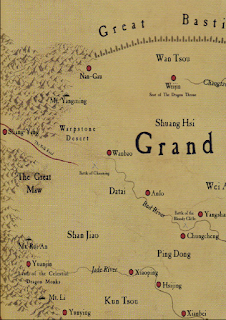 And yet all was still not well. Despite the small mountain of gold and the lamentations of its former owners still ringing sweetly in his ears, the Warlord was not satisfied. That which he sought still eluded him - an elixir of almost magical qualities that was said to be traded in small quantities in the border city of Shangwang - Sham Pu. Until Timotei had a vial of this precious liquid in his possession there would be no rest for his raiders and more importantly - no relief for his tortured and itchy scalp.

Unfortunately for Timotei, however, time was not a luxury he could count on. Unbeknownst to him, his enemies were slowly closing in on all sides. From the North came Og Akhutai, one of his former officers and a notable renegade, nursing both a knife wound in the back and a thirst for revenge. With him came a band of mercenaries and lowlifes, intent on getting their hands on whatever loot they could. From the West and a long way from home, a band of Elves hunted the Hobgoblin known as Throgg. Before joining forces with Timotei, Throgg had terrorised the Border Princes, penetrating even as far as the outskirts of the Empire and the Loren Forest. Here he had earned the enmity of the Elves through his burning and killing and had escaped their wrath - until now. Rumour had it that there was also a very disgruntled band of Greenskin outcasts who were on their way from their stronghold in the South to investigate why their usual rich pickings on the Silk Road had dwindled to a trickle. 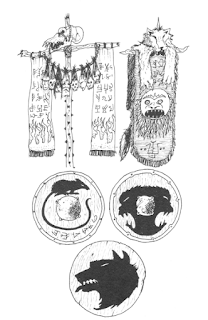 As the sun sank in the West, camp fires were lit and strong drink  passed around the Hobgoblin camp. However, as the shadows lengthened and crept forward, so to did their assailants...

As my Hobgoblins are quite a large force I figured I'd make them the objective with me as the GM. As hinted at in the back story, objectives are going to include;
- Revenge - kill a particular Hobgoblin character because of past atrocities they have committed
- Rescue - rescue captives taken by the Hobgoblins - I have 4 casualties representing an Elf, a Barbarian, a Wizard and a Knight
- Rivalry - Kill the Hobgoblin leader to take over the tribe or steal all their plunder - I have a decent size baggage train including lobotomised slave ogres pulling wagons!

There's also a big War Altar on the go which could become some kind of objective as well - its desecration or capture would certainly be a crushing blow to Timotei's forces.

As some of the warbands involved are fairly small in comparison I'm suggesting upping the number of L5 and L10 heroes to make them a little more durable, as we've done before in Warlord Paul's excellent skirmish games that we played recently. Larger armies should be able to go toe to toe with Timotei. Of course rival players are more than welcome to form pacts and truces and then stab their erstwhile allies in the back when it becomes convenient! 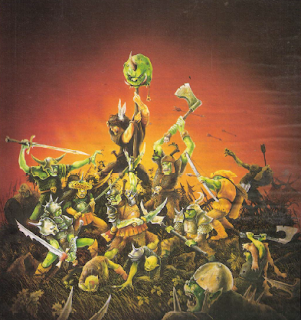 I'll also be setting this scenario as a night attack - most of my army will be sat around camp fires, asleep in their tents or unconscious due to drink - cue specially made random table! I envisage there being lots of rolls to test for alcoholism and stupidity as Officers and men are woken from their drunken stupor and plunged into the chaos of a night attack - providing of course, that the sentries can be bumped off before they can raise the alarm! I'm also happy to forgo the usual rules on ranking up units and the bonus that this confers - or at least treat it as a complex maneuver with a leadership penalty to simulate the difficulty of forming coherent ranks in the dark against an ambush. 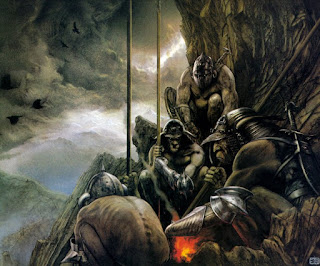 Due to the darkness there will be -1 to hit penalties in the first round of combat for any of my Hobgoblins who have been sat around a camp fire that turn, as they struggle to adjust their eyes from the brightness of the fire to the surrounding darkness. Line of sight will also be reduced for missile troops and ambushers will have the option of sneaking at half move which will make them harder to spot. I quite like the idea of having my Rocket troops firing flares into the air to illuminate their attackers - providing they have been alerted to the ambush. Of course which part of the table the rocket flares illuminate will be determined by the usual rules for firing explosive rockets, with perhaps an area with a 4" or 5" radius being lit up. 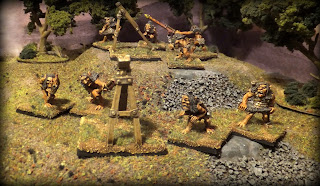 If and when there are multiple combats, they'll just be treated as normal in 3rd ed. with attacks being shared out as the players see fit - if you've run out of attacks you've just got to take what's coming! All in all that should level the playing field a bit and lend itself to all sorts of shenanigans I hope! If there is anyone else who fancies jumping in then let me know - here's the link to the discussion thread on the forum