Came in his Majesty's ship Minotaur, of 74 guns, Captain Mansfield, from a cruise, for the purpose of collecting her officers and men, sent in her prizes; she might have taken a great many more, but had no hands to board them.

Copy of a Letter from Captain Mansfield, of his Majesty's ship Minotaur, to Sir E. Nepean, Bart. dated at sea, 30th May 1803.


I beg leave to acquaint you, for their Lordships' information, that I this evening saw the French republican frigate la Francaise safe off the Dodman, agreeably to signal made by the Hon. Admiral Cornwallis. She was captured by his Majesty's ship in my command, on the 28th May, in company with his Majesty's ship Thunderer, having chased from the fleet, and during the chase was joined by the Albion, which ship had parted from the fleet some days before in thick weather. The Prize proves to be the Republican French frigate la Francaise, from Port-au-Prince thirty-five days, Captain Jurien. She is pierced for twenty-eight twelve-pounders on her main-deck, and sixteen nine-pounders on the quarter-deck and forecastle, ten of which were in her hold, and had on board one hundred and eighty seven men.

So finally finished my Dad's birthday present - bit of a sprint to the finish to get it done and presented to him yesterday! Unfortunately I didn't get time to put any colours and ensigns on so that will be a little job to do next time we're over. You may (or may not!) notice I have also greatly simplified the rigging - time, skill and failing eyesight were factors in that decision!

Anyway it was certainly well received, which was a relief - only thing is I now have to find a way of topping it next year for his sixtieth! Looks like it might well be the battle line for Trafalgar after all...!!! 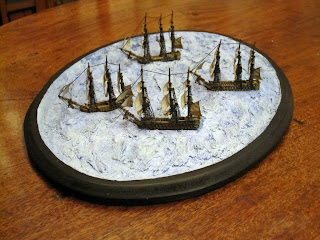 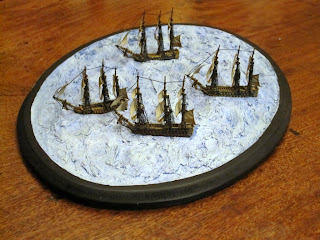 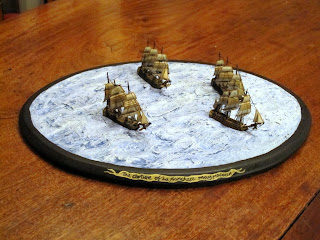 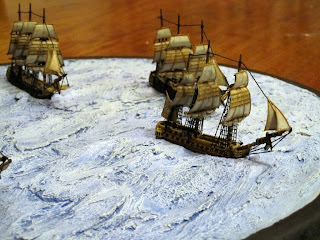 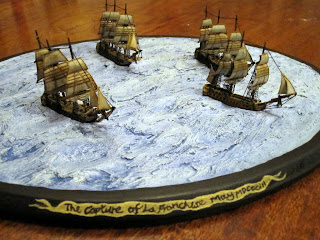 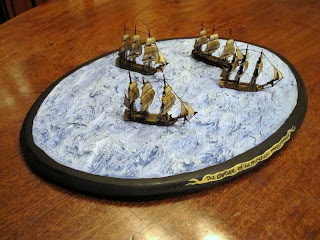 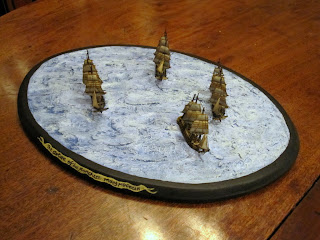 Much as I have enjoyed researching and painting something different to the usual fantasy stuff I am now looking forward to selfishly getting on with some Orc's Drift stuff just for me!

Every man is as Heaven made him, and sometimes a great deal worse.

A great quote from Cervantes' Don Quixote and oh so true in the case of this pair, seen here emerging from the Linden Way's premier nightspot - the Slaan in Space... 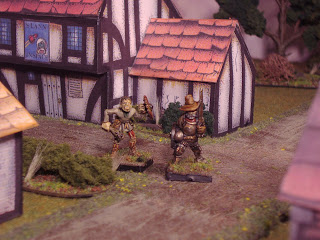 Thought I'd better post an update on the Orc's Drift project in case anyone thought I'd forgotten about it - normal service will be resumed in February, once I've finished the naval diorama I'm in the middle of!
These two provided me with a little light relief from the ship building I'm currently involved with and getting back to Cervantes, reminded me somewhat of his eponymous hero and his slow-witted squire.
So may I present the two latest replacements to be press-ganged into the Linden Way militia - after the Norse settlers got drunk and went off on a saga holiday...
A gentleman with delusions of grandeur and nobility, Jon Eochaid (pronounced Yeo Hay!) is the victim of reading too many Estalian romances. Obsessed with the notions of chivalry and questing and believing every word he has read to be true, Eochaid set out in search of adventure with his "squire", Groucho Panzer, a rather gullible and stupid local farmer. With his battered and ancient armour, wonky sword and rustic squire, he didn't exactly cut a dashing figure... 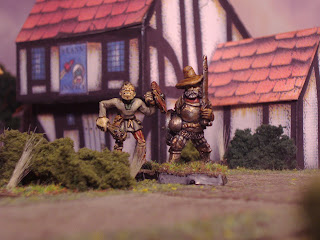 Not two miles out of Palesandre they met with an officer of the Grand League who was gathering recruits for the militia. Mistaking him for a traitorous knight, Eochaid led the charge but soon found himself and his squire badly beaten by an angry mob of new recruits and worse still - enlisted in the militia! 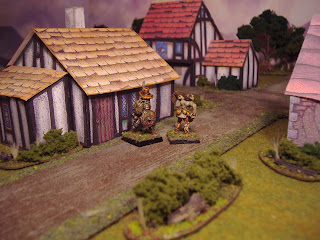 His indignation at his treatment was soon assuaged, however, when Groucho relayed the news that they were there to defend the good people of Linden Way against the slavering hordes of Orcs that were heading their way - a worthy quest for so noble a knight! 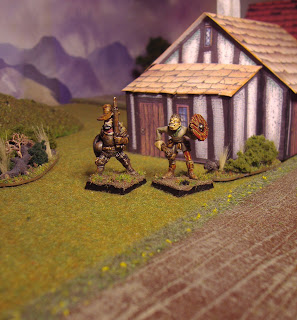 I don't normally post pics of unpainted or WIP stuff but as I've been sweating and cursing over this little bugger all night I felt a certain sense of achievement at getting all the bits stuck together in the right place - I think... 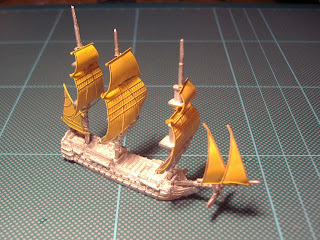 This is a 74 gun British ship of the line which will be representing the Minotaur - the ship our illustrious ancestor, Captain Mansfield, commanded at Trafalgar. As I've mentioned in my last post, I'm putting together a diorama for my Dad's birthday - only two more British ships of the line and a French frigate to put together! 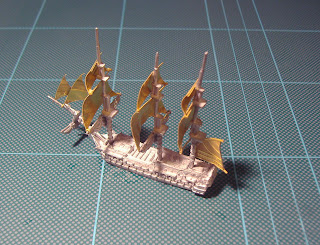 Quite looking forward to painting these up as they've been sat in bits in a box since before Christmas - plus as soon as these are done its back to the Orcs!! 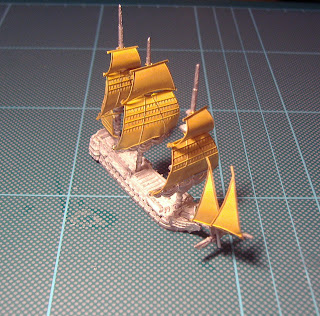 Speaking of which - here's Ugezod, who'll be standing in for Hagar Sheol (The chieftain of the Severed Hand Orcs) until I remortgage the house in order to afford an actual Hagar Sheol mini!!! As you can see, despite Ugezod being rather large for an orc, these ships are a bit small - hope I have some sanity by the time I've finished with them... 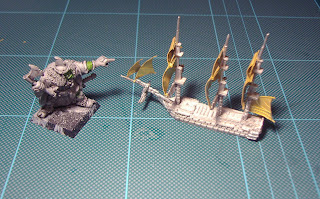 So here's the reason I have got nothing done on the Orc's Drift Project for the past month or so... 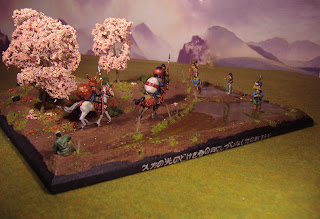 The wife's Christmas pressie! She is a bit mad on all things Japanese and happily was over the moon with it.

The inscription reads (I hope!) -


In this shimmering spring day
Ah, with ever anxious heart
The blossoms are falling 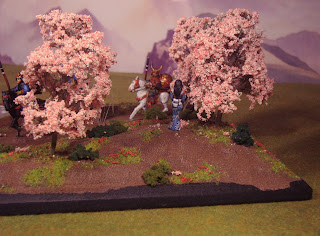 Thanks again to all those who gave sage advice on the Workbench forum over on the LAF - much obliged and the wife quite liked it too! 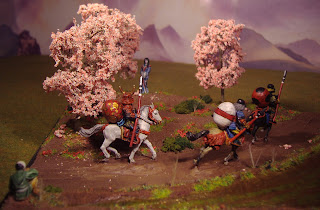 The mounted samurai (lovely minis but a bit fiddly for my painting tastes!) and peasants are Perry miniatures. The geisha is from Taban miniatures and the lovely cherry trees which I'd love to claim as my own were made by a company called Model Trees. Not forgetting Just Bases who do a great line in made to measure or "off the peg" diorama and presentation bases. 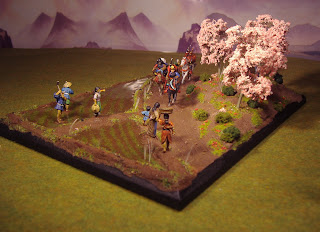 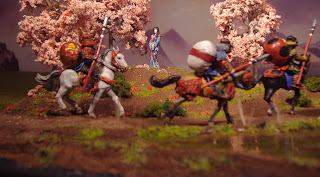 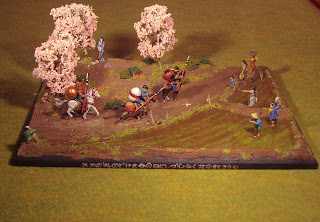 Got to say it was a bit of a roller coaster putting this together - I had to get to grips with quite a few new things: Working with styrofoam for the hill and paddy fields, pouring E-Z water (meltable plastic pellets), reshaping E-Z water with a heat gun when it dried too quick in places without melting the styrofoam(!!), cleaning E-Z water off the oven top when I spilled it on the hob(!!!), researching and painting samurai armour(!!!!). All in all a great learning process and a lot of fun to do!

It does look, however, that January will be a lean month for all things green as well. My next project is a Birthday present for my Dad. Can't remember if I've mentioned this already so apologies if I'm repeating myself! He has been researching and writing a book on our illustrious ancestor, Captain Charles John Moore Mansfield, who commanded the 74 gun ship of the line, Minotaur, at the Battle of the Nile and Trafalgar, among other smaller engagements. So what better present could I get him other than a lovingly crafted diorama of one of Mansfield's exciting escapades aboard the good ship Minotaur!

Although the thought of recreating the British battle line at Trafalgar crossed my mind briefly I have decided to focus on one of the Minotaur's smaller skirmishes! The capture of the French frigate, La Franchise, and the French general who was on board at the time to be exact.

So I have some rather nice 1/1200 ships from Rod Langton Miniatures waiting to be painted up. Four in all, representing the Minotaur, supported by Thunderer and Albion and of course the French frigate, La Franchise.

New stuff to get my head round this month -
Sculpting a rough sea onto a diorama base
Painting and varnishing it to make it look like the sea
Rigging very fiddly looking 1/1200 ships with black thread!

Should be an interesting month...

I look forward to cracking open the green paint again soon!
Posted by Thantsants at 16:43 No comments:

Just once I'd like to meet an alien menace which wasn't immune to bullets!

Best Christmas pressie I got was a nice big cabinet to house all my painted minis in so set about last weekend digging them out of cardboard boxes and cupboards when I came across my old BTD Dr Who stuff and the rules for the old Invasion Earth game!


Well couldn't resist the urge so I set the table and had a little scrap between Unit and the new Dalek masters of Earth...

Big Ben chimed twelve times in the stillness of the summer night to signal the end of July, a month which had seen record breaking temperatures day after day. A warm, gentle breeze stirred the trees along the Embankment. Black cabs cruised the streets of London, ferrying late night revellers home, and the boys in blue carried out their foot patrols with little to report...  All seemed peaceful... but nothing could be further from the truth. The Dalke Invasion of Earth was about to begin.


From their hidden position off the far side of the Moon, the Dalek Fleet was preparing its assault, readying untold numbers of chemically primed missiles for launch. Choosing their targets carefully, the signal was given and the deadly storm of missiles bombarded the Earth. For twelve hours, missiles rained down on the Earth and when it was over, the planet was in turmoil! Governments around the world were in disarray, their leaders killed or wounded, their military establishments in ruins. It is a dark time for the Human race... but all is not lost!

Now that the missile assault has finally ceased, the beleagured UNIT forces make their way out of their underground bunkers. With their world in flames and their families lost or scattered, the bitter taste of revenge burns brightly among the forces. As the Dalek dropships begin to release waves of troops around the world, the elite soldiers of UNIT have only one course of action to take: destroy the Daleks and reclaim their world.

As for the Daleks, they have taken the first step towards destroying the Earth and now they plan to claim it as their own!

UNIT's counter attack in London gave the Daleks a shock but it proved ultimately to be a pyrrhic victory. The Brigadier's forces had paid a high price for their early victories in the ruined streets of the once proud capital. Now they were on the run as Dalek reinforcements poured in.

The Brigadier now finds himself trapped in his makeshift HQ in the Cumbrian mountains as the hated Daleks draw the net ever tighter around him... 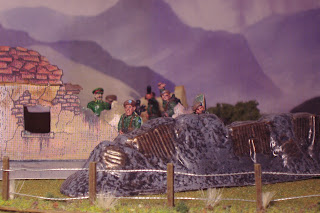