Trolltooth Wars: The Strong Arm of the Marr 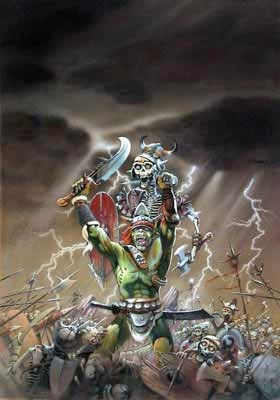 Things are really beginning to take shape for this project now as I have assembled all the minis needed for the first scenario. If you haven't seen it yet Warlord Paul has done a great job breaking down the narrative of the story into a series of scenarios here.

In Old Cathay did Hobgobla Khan...

... a call to arms and raiding decree. 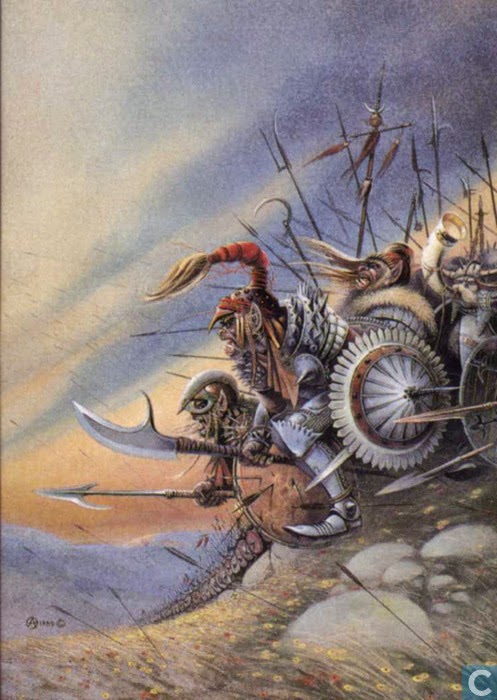 Enough with the butchering of Coleridge's great poem Kubla Khan and onto another project I have lined up for 2015 and specifically Chico's Goblinoid Outcasts game he has planned for BOYL 2015.

What big double handed weapons you have Mr Wolf...

Another unit I got to finish was Golgfag's Mercenary Ogres, or the Red Dogs of the North as I've christened them. The name comes from the name of Golgfag's clan name - Rutdrogg. Kind of sounded like Ogre dialect for red dog to me anyway! And for red dog read wolf.

The original posts and background can be found here, here and a bit more on the shield designs here. I notice from the dates of those posts that it's only taken me four years to finish off the unit!

Don't worry - I'm not about to share with you my choices in underwear (or lack of)... 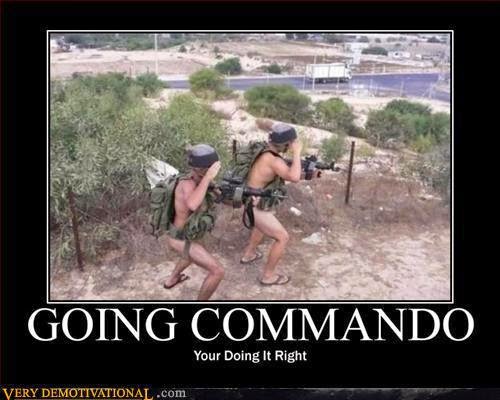 This post is in fact to celebrate another little mile stone to warm the cold and ever hungry collector that lurks somewhere in my psyche - Ugezod's Death Commandos. 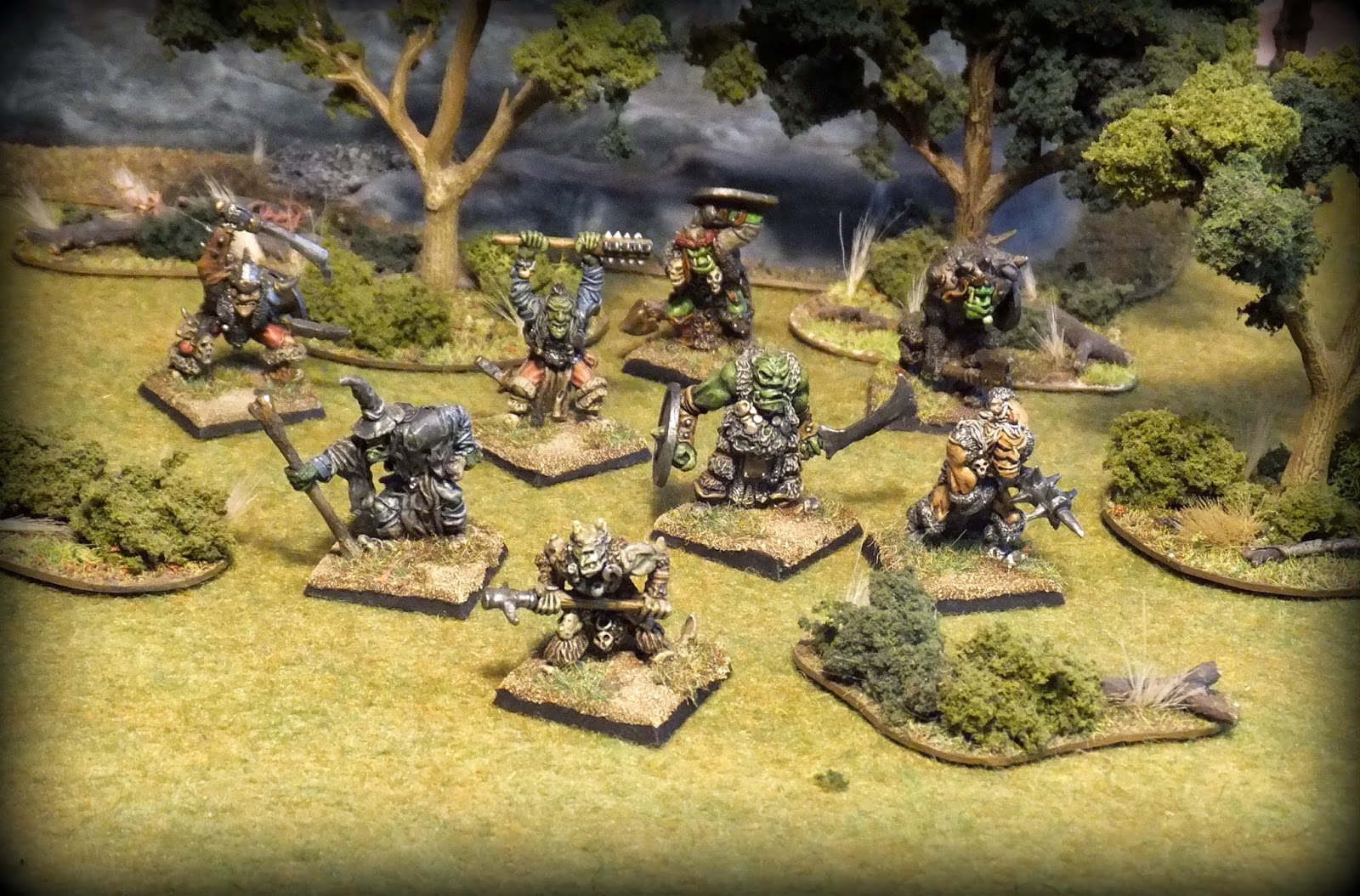 Charge of the Green Brigade!

Time to have a look at the new cavalry wing of my newly enlarged Goblinoid horde and as with any part of an Orc and Goblin army there exists intense rivalries between the tribes and regiments that make it up.

First up is Crudefell Pullover's Lite Brugayd of Wolf Riders, a twenty strong unit of the nastiest, cowardliest and down right vindictive Gobbo's. 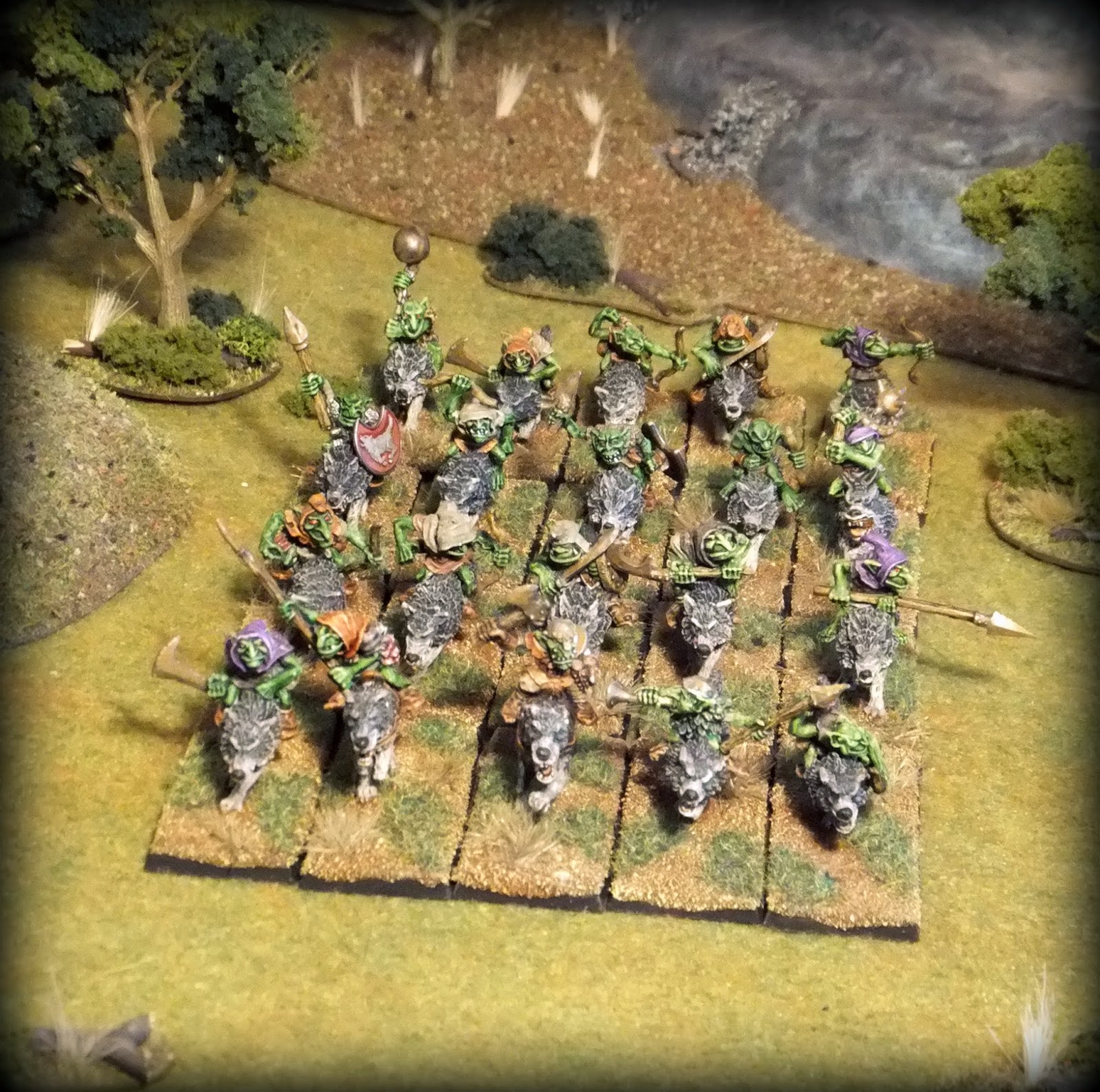 Can't spot them in the front line? Then they'll probably be skulking around the flanks, looking for an opportunity to kick a stronger foe while they're down or otherwise engaged. 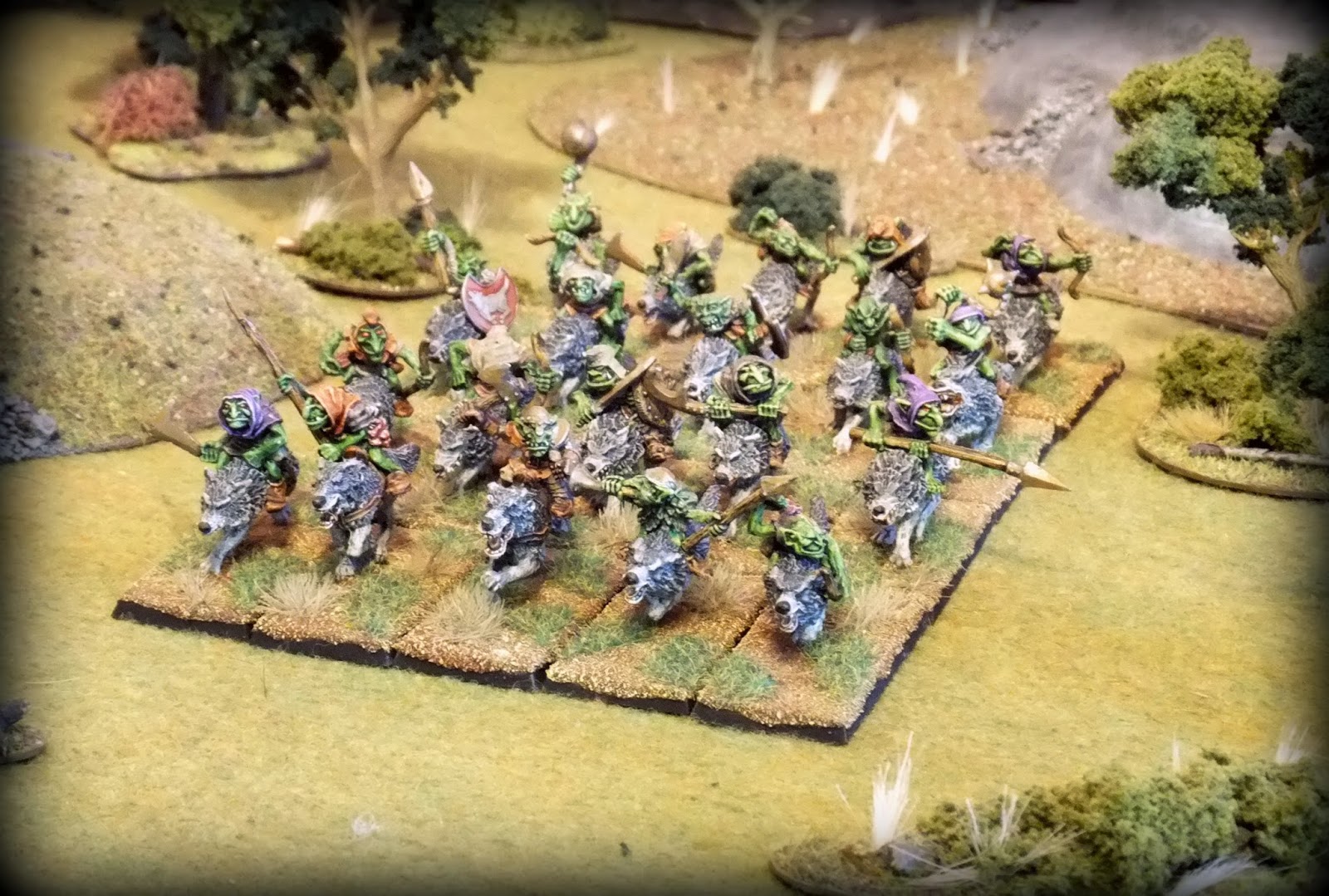 Centre of the picture is Pullover himself - a fine figure of a Marauder Goblin. To his left is Bugler Bragget, an enterprising Snotling who's skill (enthusiasm) for blowing his horn has seen him promoted not only to the unit, but to an unenviable slot in the front rank. Having survived both enemy fire, the enmity of his fellow wolf riders and his own mount, Bragget's place as the Regimental mascot was assured!

To Pullover's right is an enterprising young spearman with ambitions of being the unit's standard bearer - once I get round to making it.... 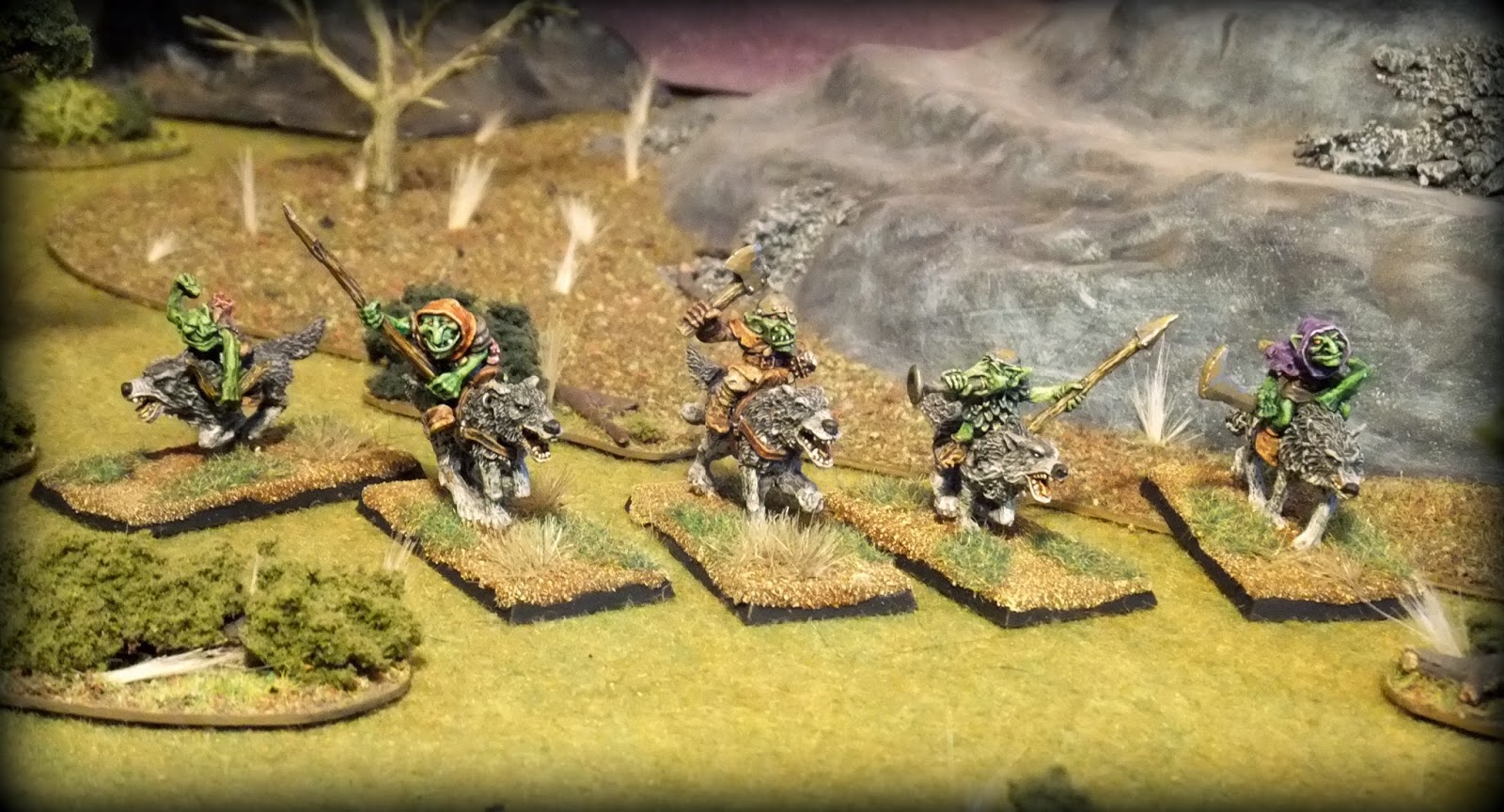 An assortment of archers and spearmen that form the bulk of the troopers of the Lite Brugayd. And believe it or not - a Lord of the Rings Warg Rider on a... Citadel Wolf. 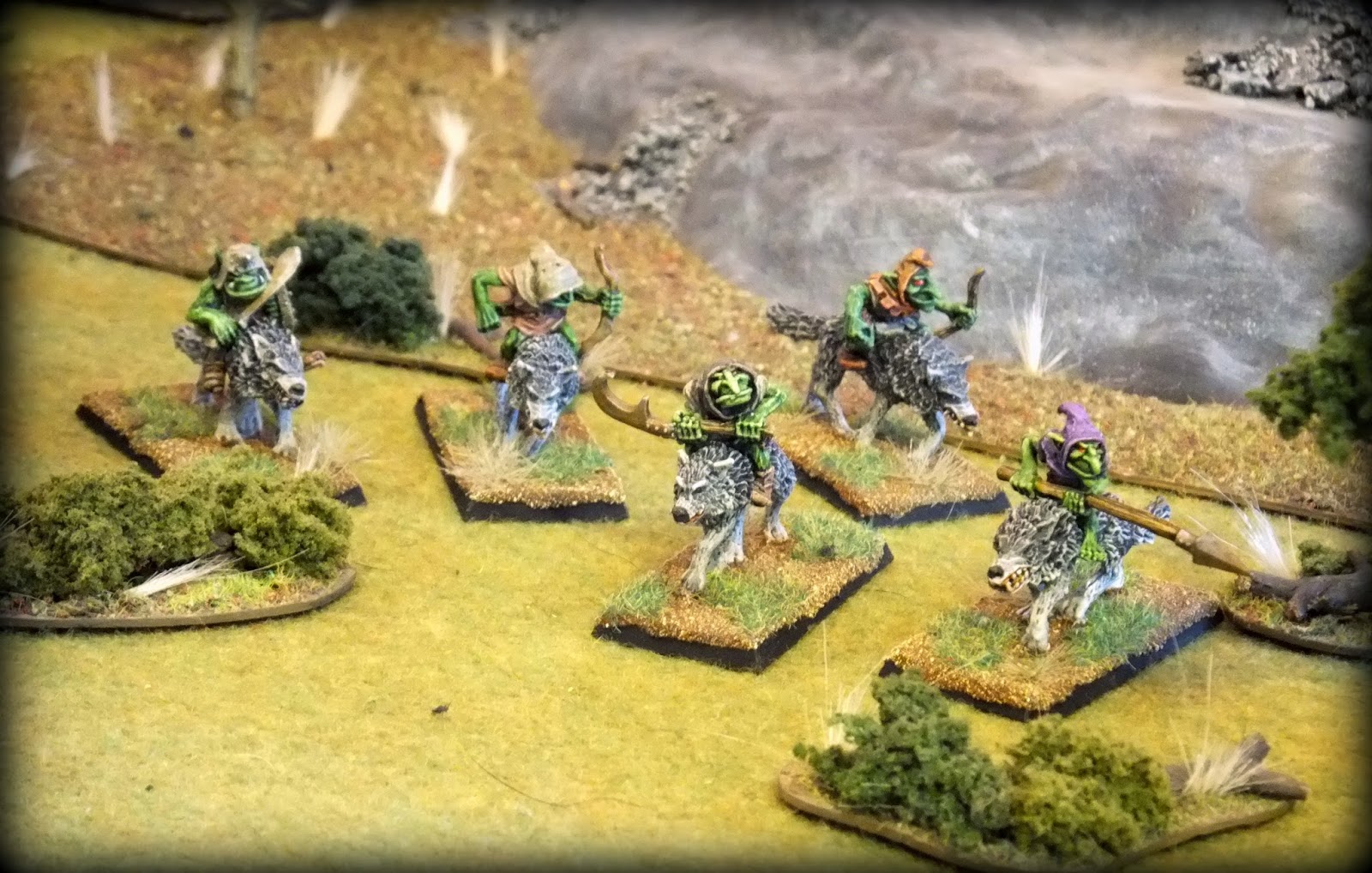 Several more Marauder Wolf Riders make up this next group, along with the chap who seems to be a variant of one of the fanatics I mentioned in my last post - though this time with a spiked ball and chain. 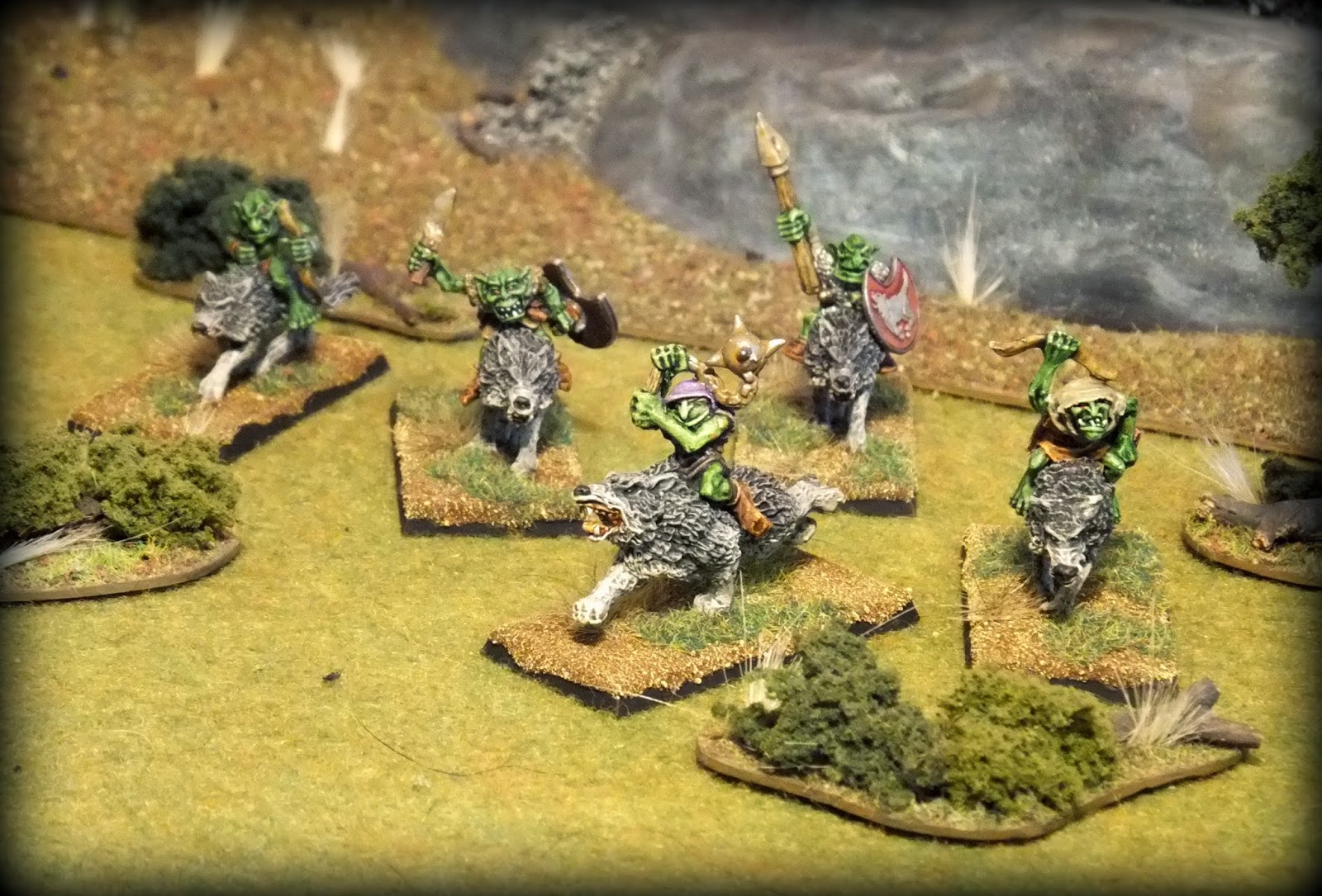 Hoorah - finally a Lord of the Rings Warg Rider as God intended him - mounted on a Warg! Behind him is another loony with a ball and chain who was kindly donated, along with quite a few other greenskins, by the esteemed Citadel Collector, Steve Casey. Not sure where he comes from - I'm assuming he's a later Citadel model? 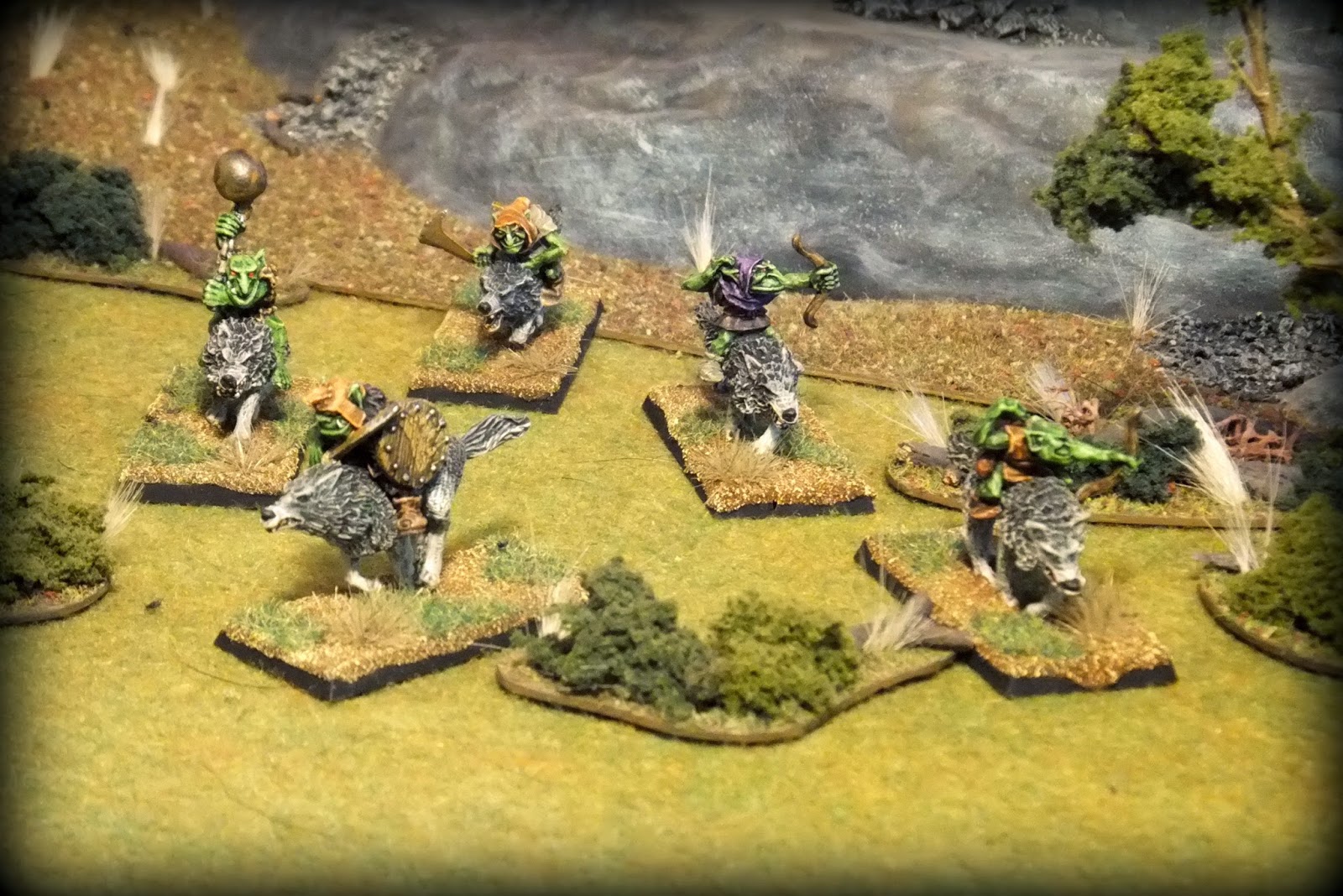 Thanks also to Harry for his excellent tutorial for painting wolves as shared by Phreedh when he posted up some lovely Timber Wolves some time ago! I must see if I can pick some of those up as mounts for the 90's Goblin Wolf riders I have as I can't stand the later plastic wolves.

Perhaps the bitterest rivalry is between Pullover's Lite Brugayd and Lootcan's 'Eavie Brugayd. Apart from Pullover being a mere Gobbo and a damned jumped up one at that, Lootcan is painfully aware of his position in the heirarchy and so takes every opportunity to lord it over his diminutive rivals - especially with Lurd Raglank and his Even 'Eaviers breathing down his neck and giving him exactly the same treatment! 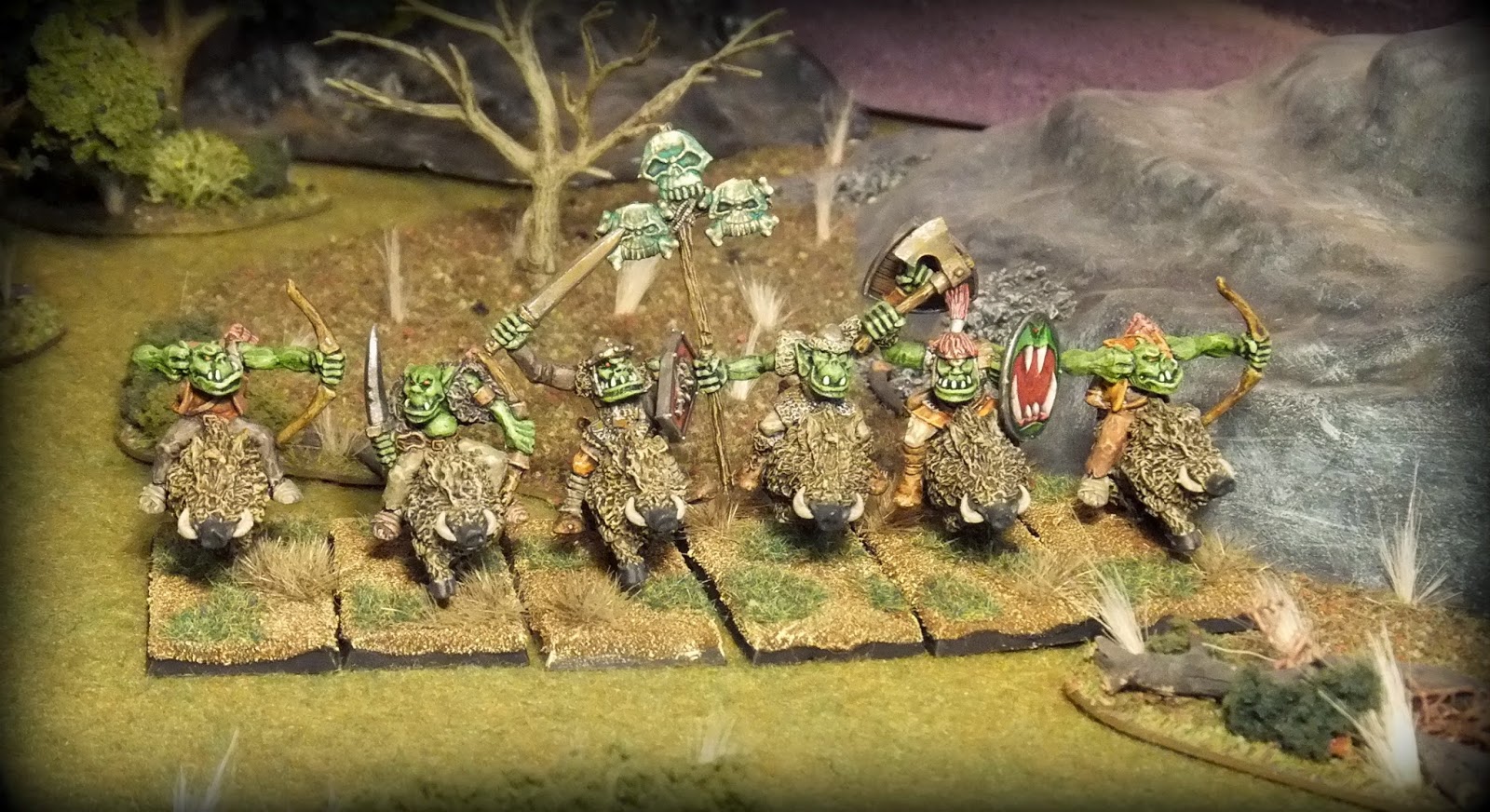 Lootcan (far right) is also plagued by the rumours that he is somehow related to Pullover by the marriage of some distant cousin. Obviously for an Orc to even be rumoured to be related to Gobbo scum is unthinkable and it is a rash trooper who specualtes on the subject over the camp fire within earshot of his boss. 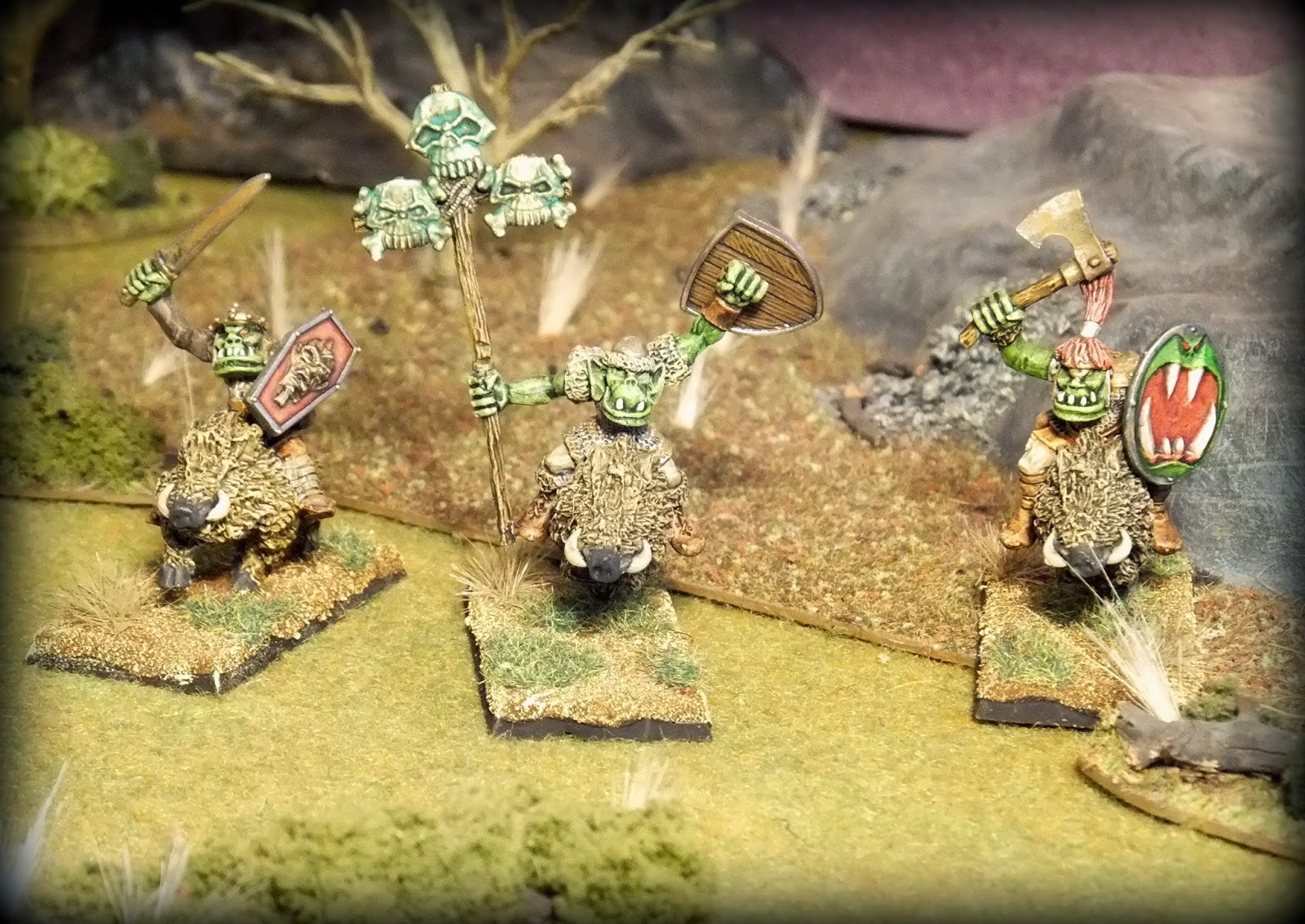 Lootcan's standard bearer - the standard is made up of some of the naff skulls that came with the later 90's skeleton box sets. I think they were supposed to be stuck on shields? Anyhow, painted bronze and with some liberal verdigris added I think they make a nice nod towards the Even 'Eaviers' standard. 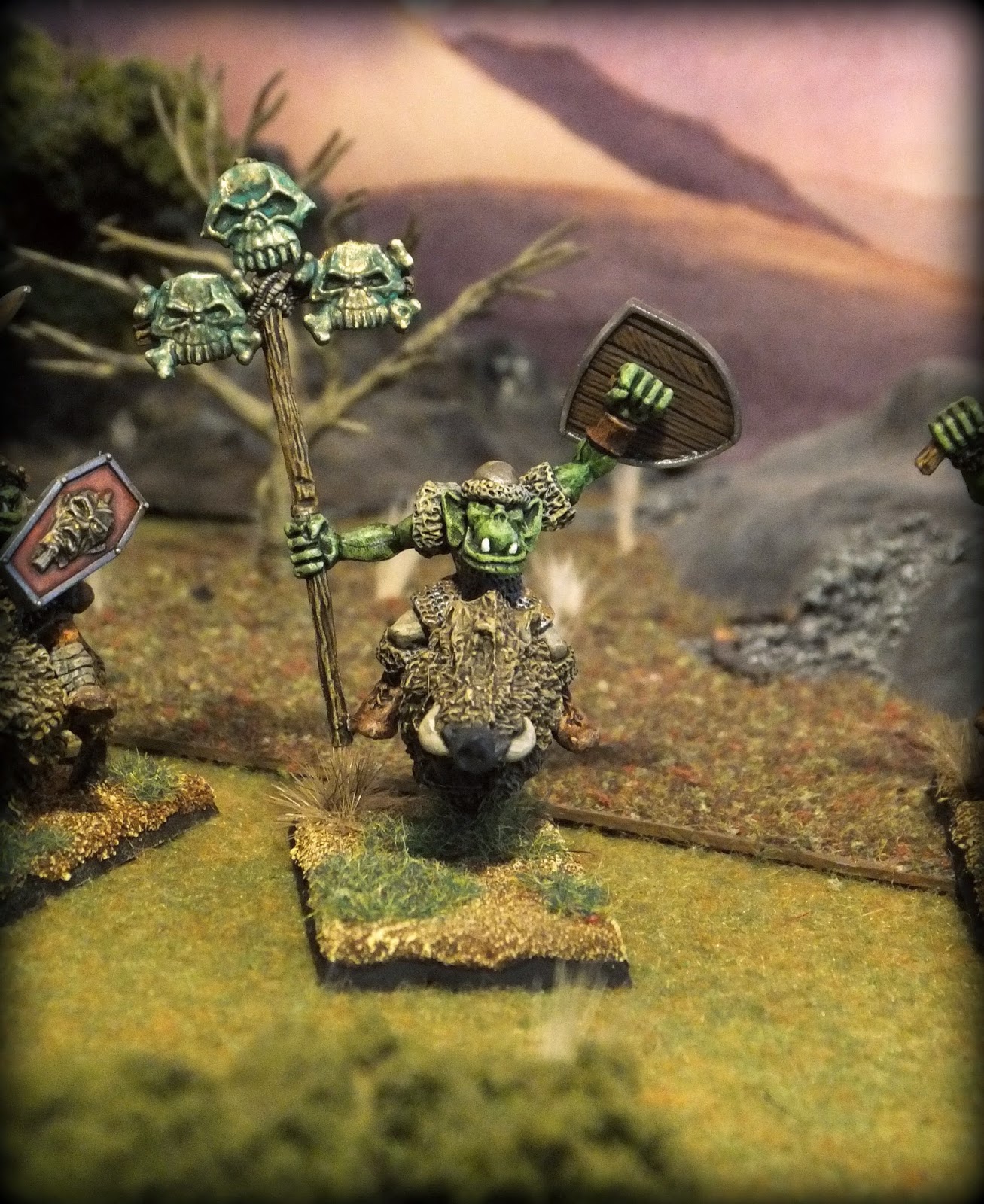 God bless Marauder for their moulded shield designs - I really didn't have time for many freehand designs during the panic of getting ready for Boyl 2014! 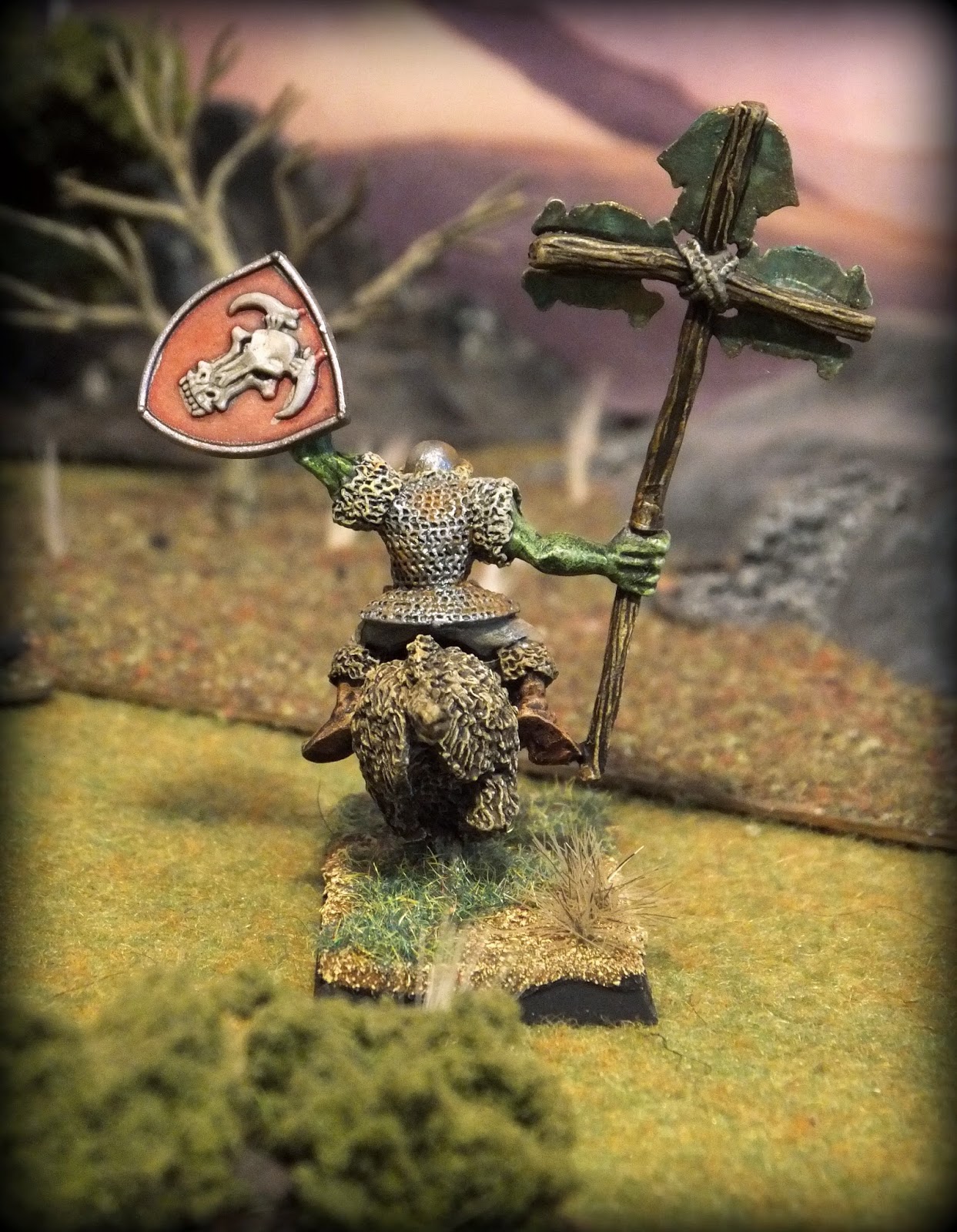 'Eavy Brugayd Trooper - again with a handy Marauder shield that was very quick to paint! 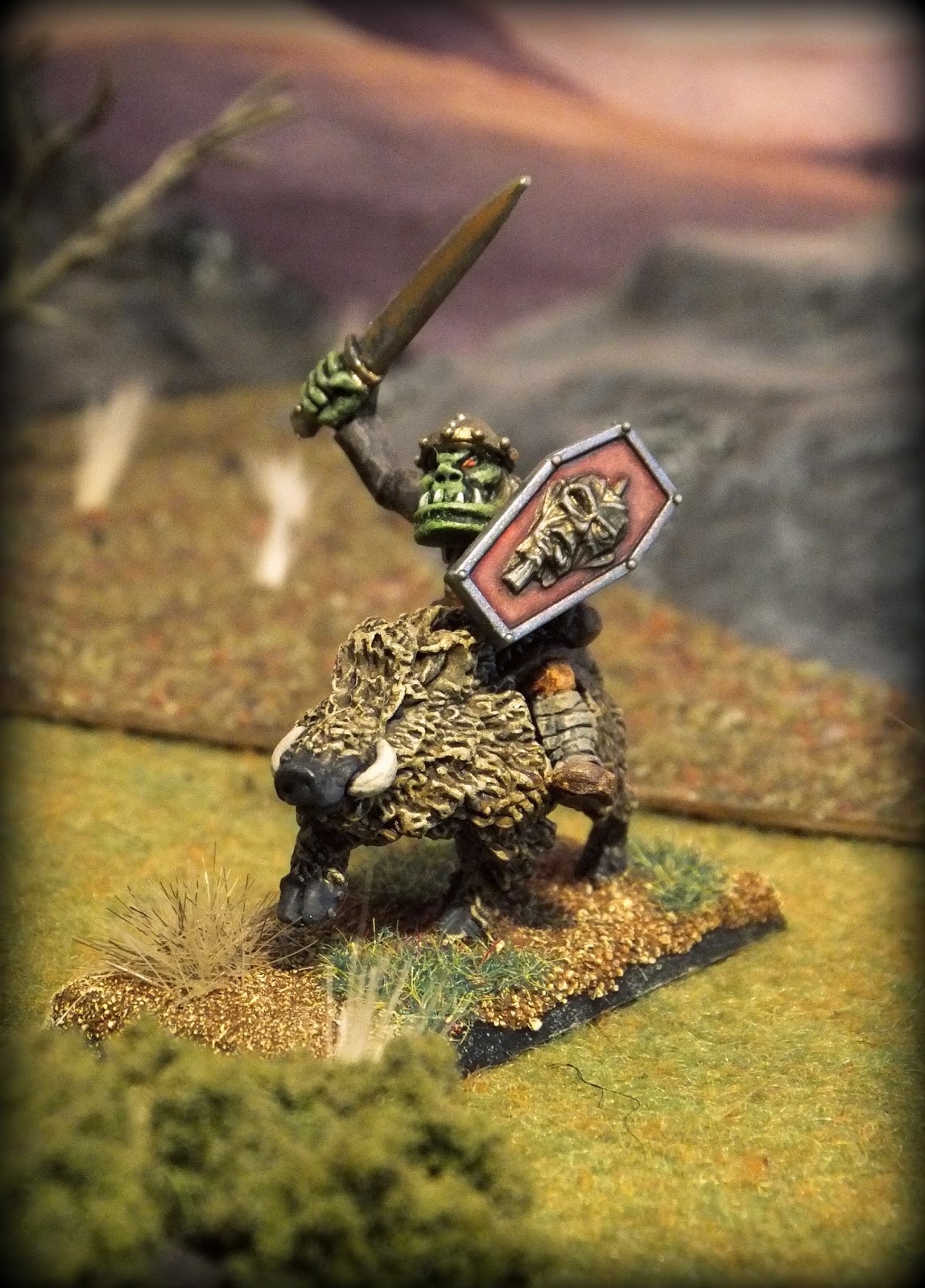 Lootcan has been accused of many things by his rival, including being all mouth and no trousers - wonder where they got that idea from? 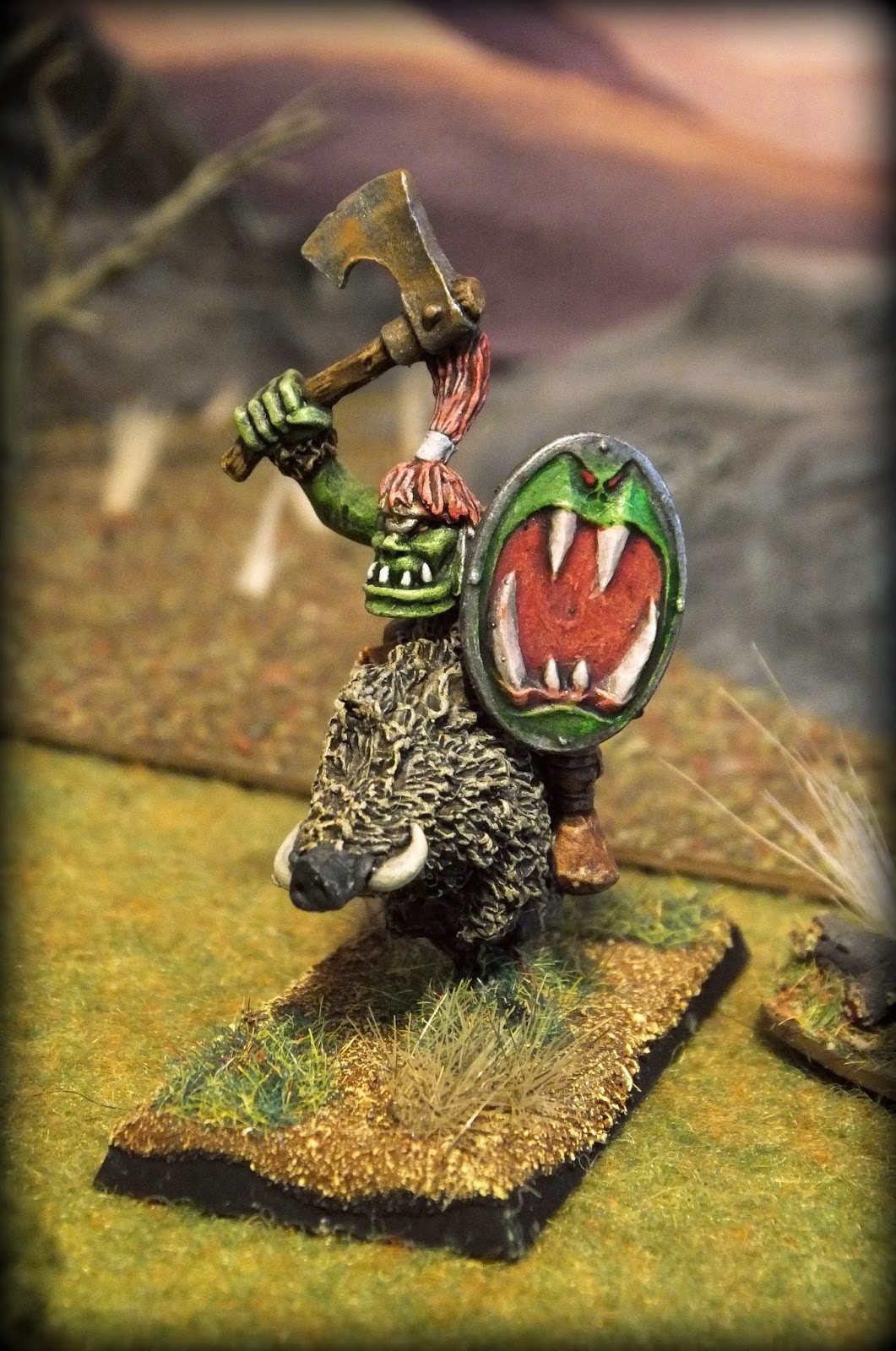 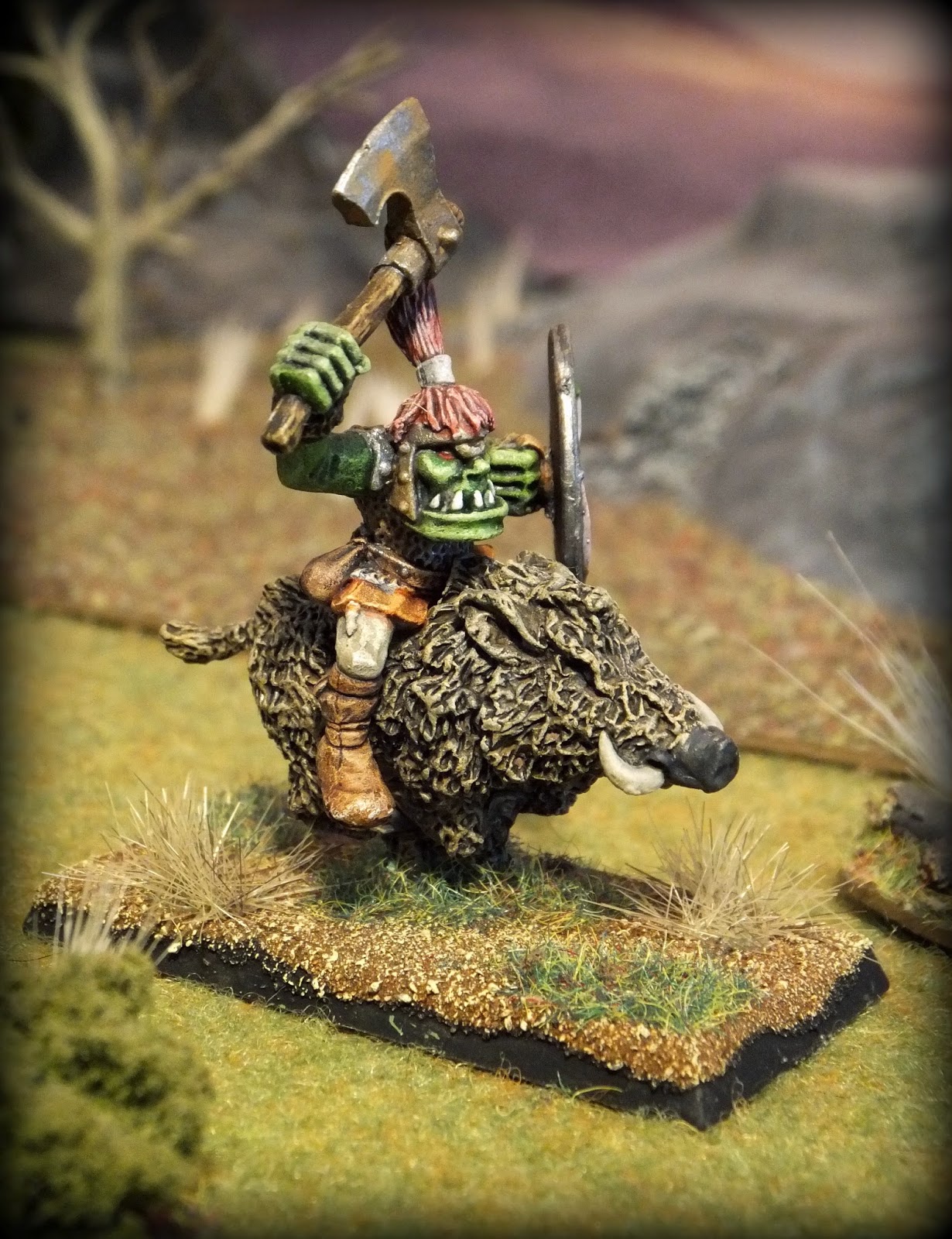 Although Lootcan likes to think of his mob as the 'Eavies, they really are just a skirmishing force of archers, although they have been known to get stuck in occasion. 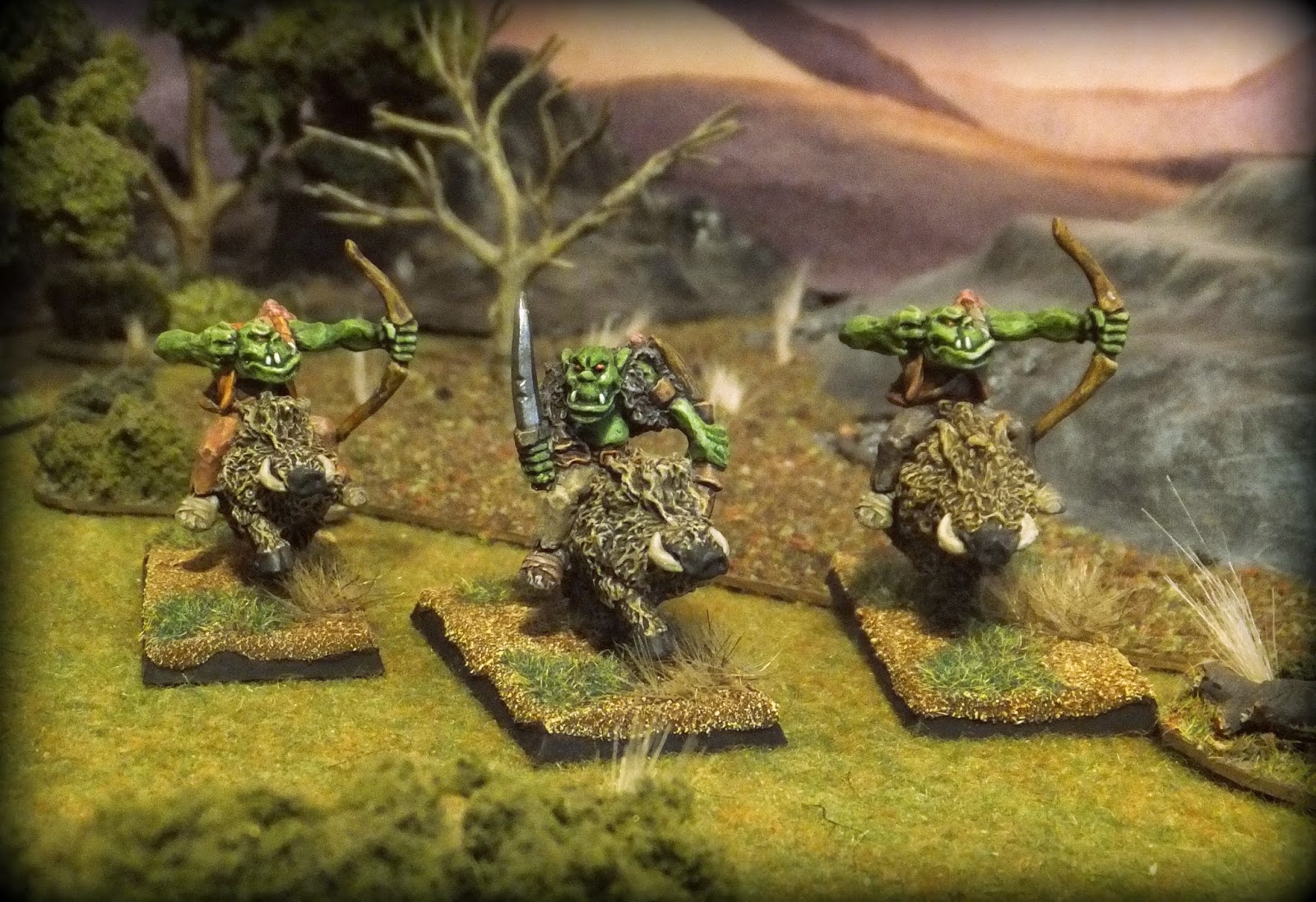 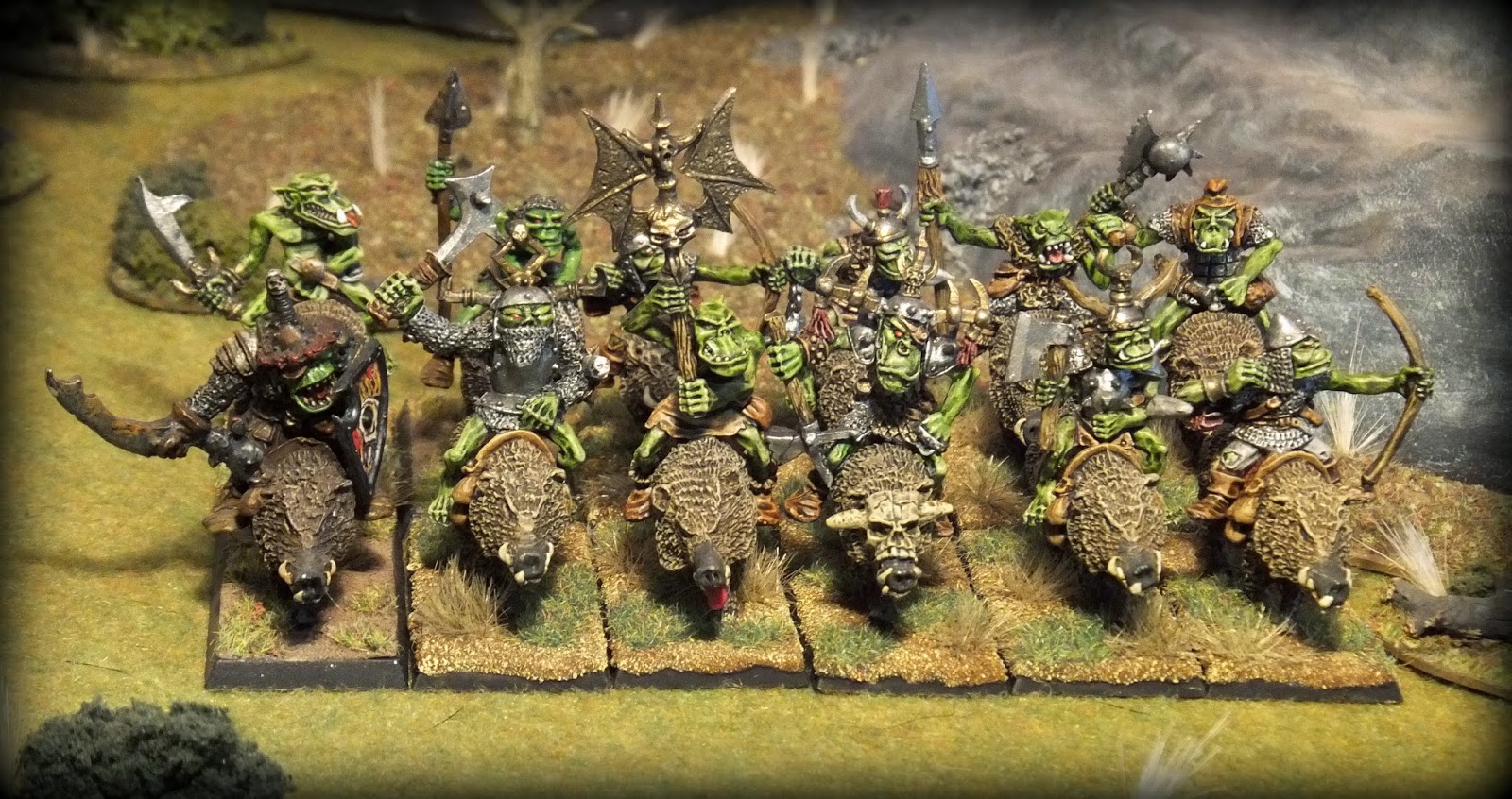 A concerted charge from the Even 'Eaviers is a sight to behold - just preferably not from this angle! 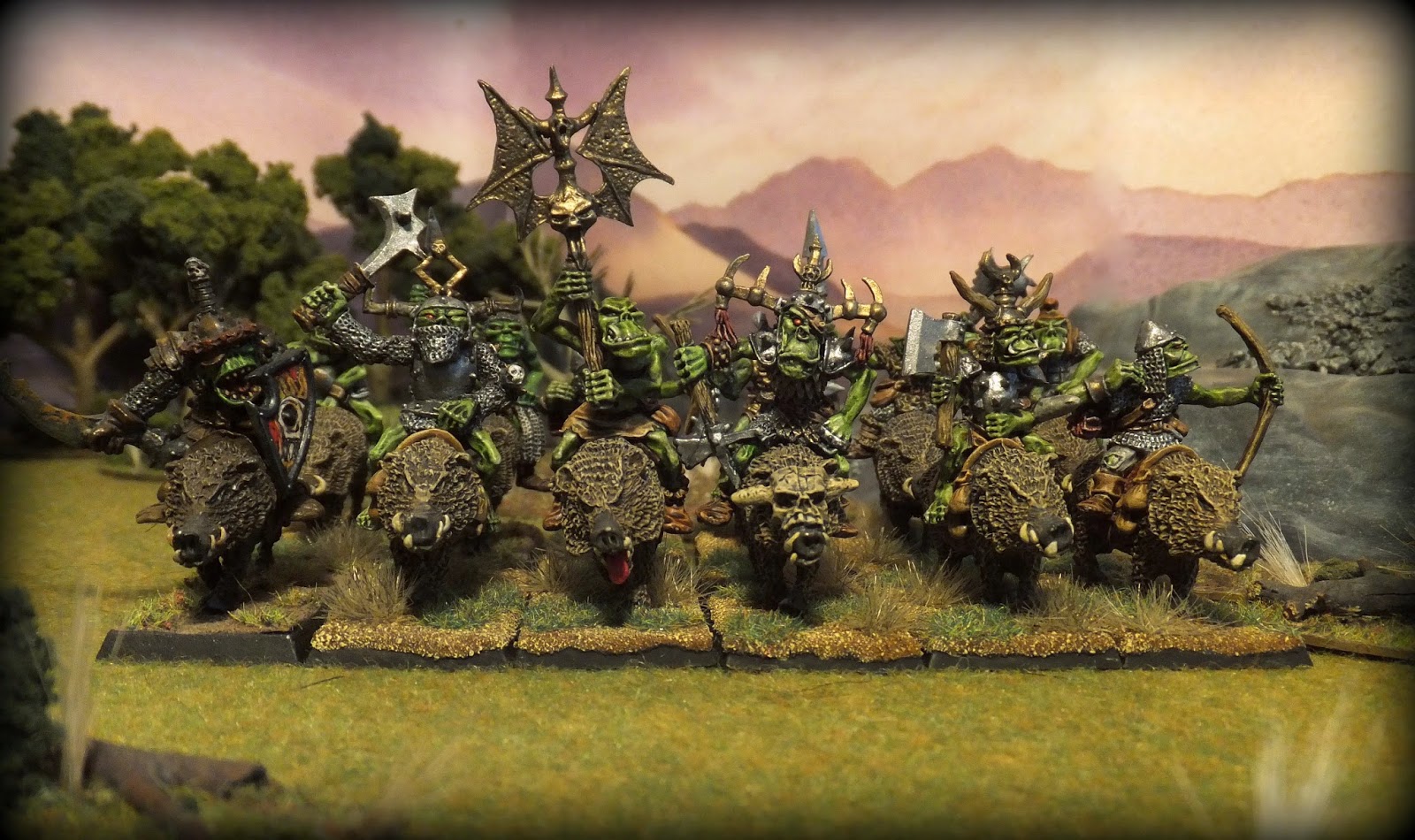 Lurd Raglank is a hulking brute of an Orc who's incredibly low IQ means that he is on a par with, and has an uncanny affinity with his Boar mount.  The two are literally inseparable and operate as one on the battlefield, each anticipating the other's intentions in perfect harmony. Not that difficult a feat really when those intentions only include charging at the nearest enemy and eating them. 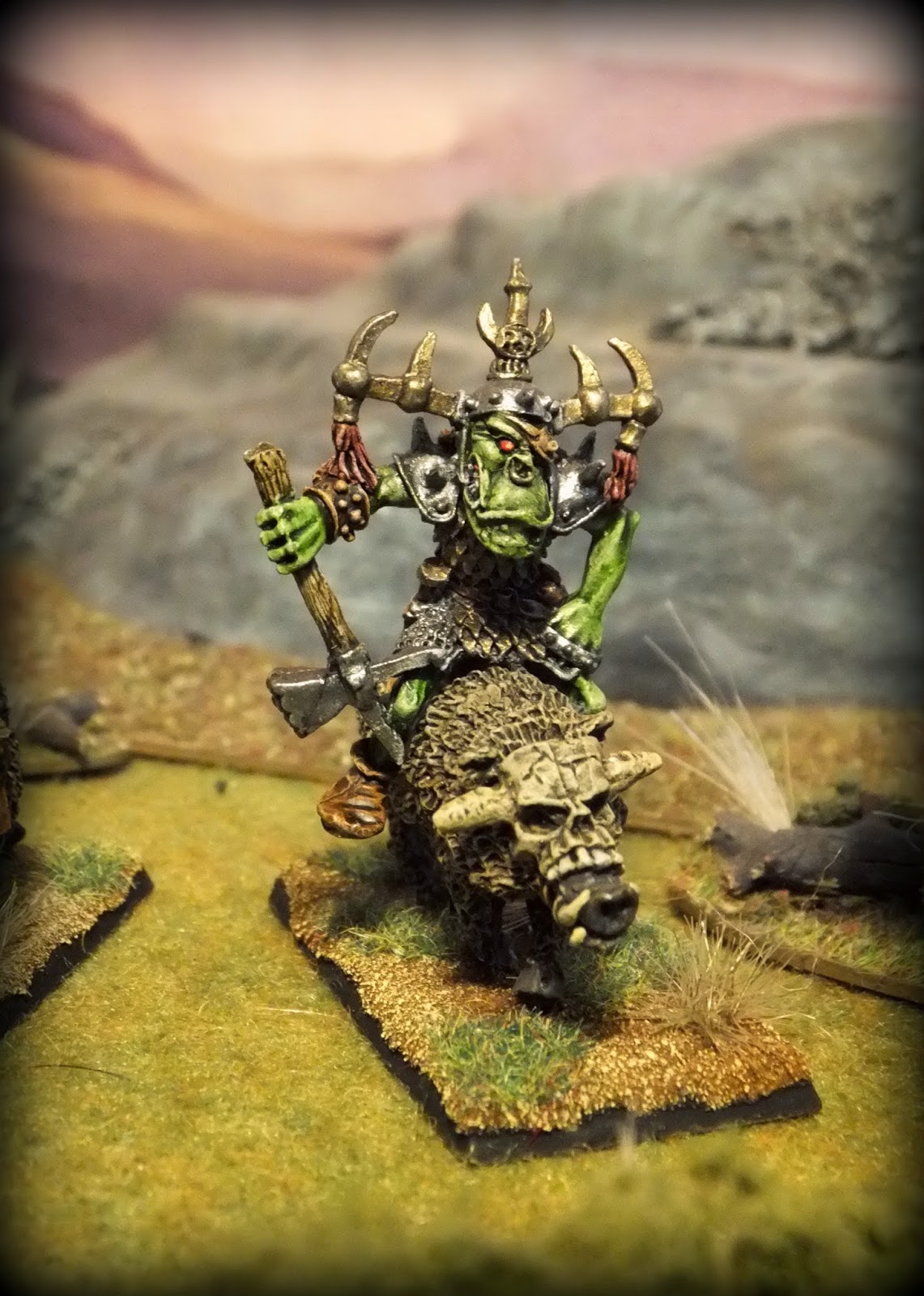 The Even 'Eaviers standard is rumoured to have been pulled off a Chaos War Altar and doubles as a pretty good double handed weapon! 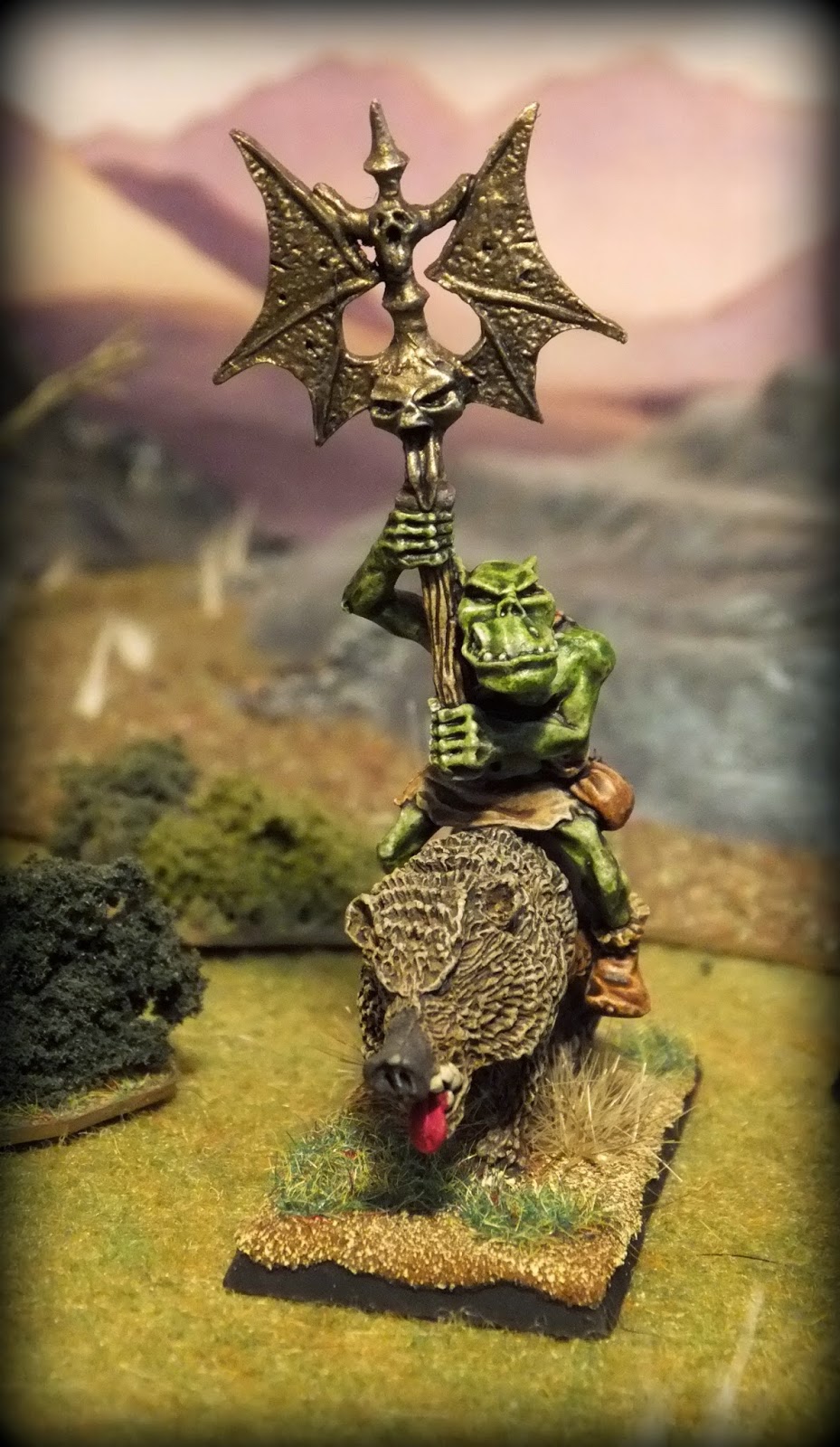 The troopers who make up the Even 'Eaviers are the bigger and meaner Orcs who are stupid enough to get on the back of the rabid and highly irritable boars that are favoured as mounts. 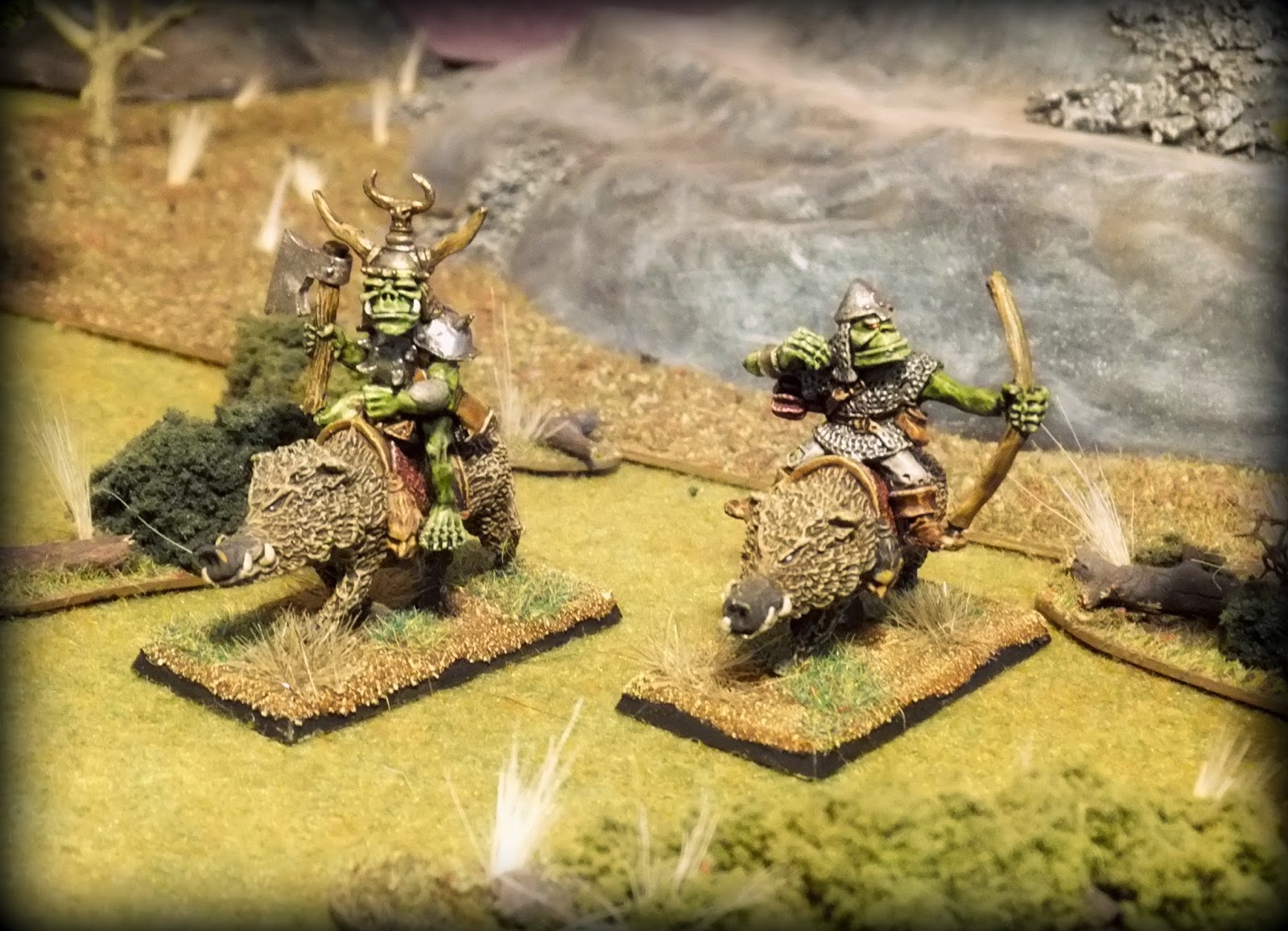 I realised as I was taking pictures that I had forgotten to do their shields - I'll have to remedy that at some point... 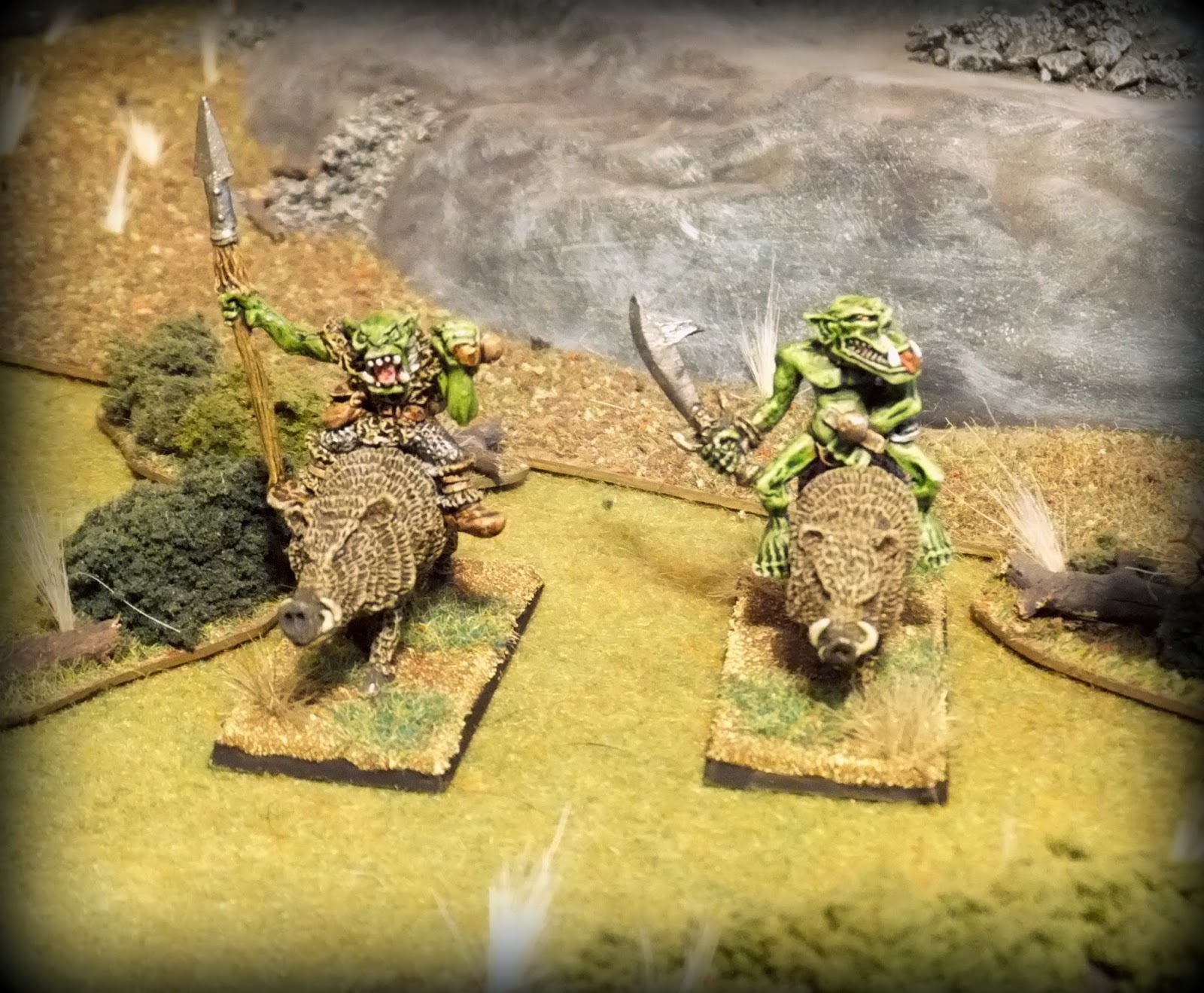 I painted these two years ago - good to finally give them some company! 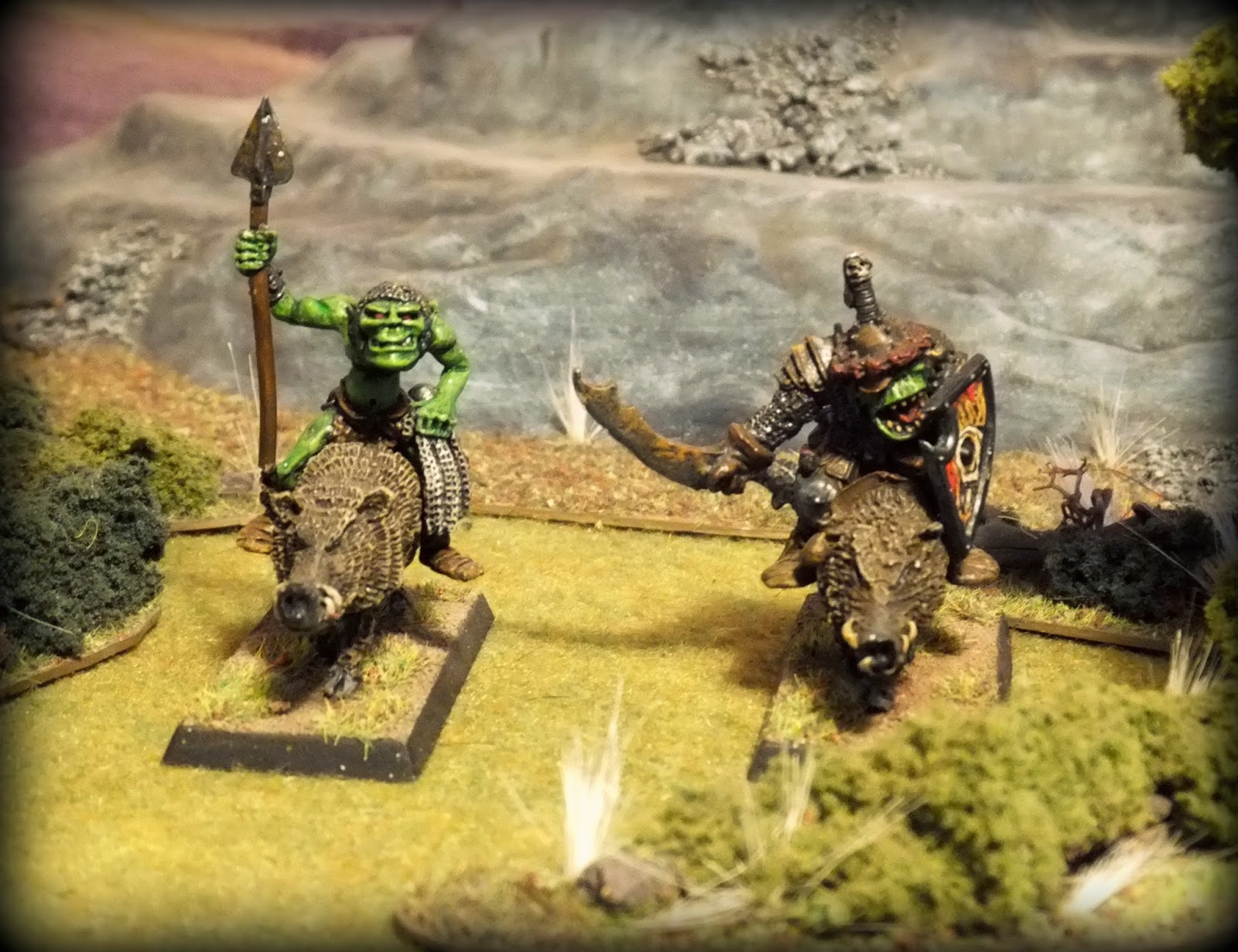 Detail of the shield - can't beat a flaming skull or two. 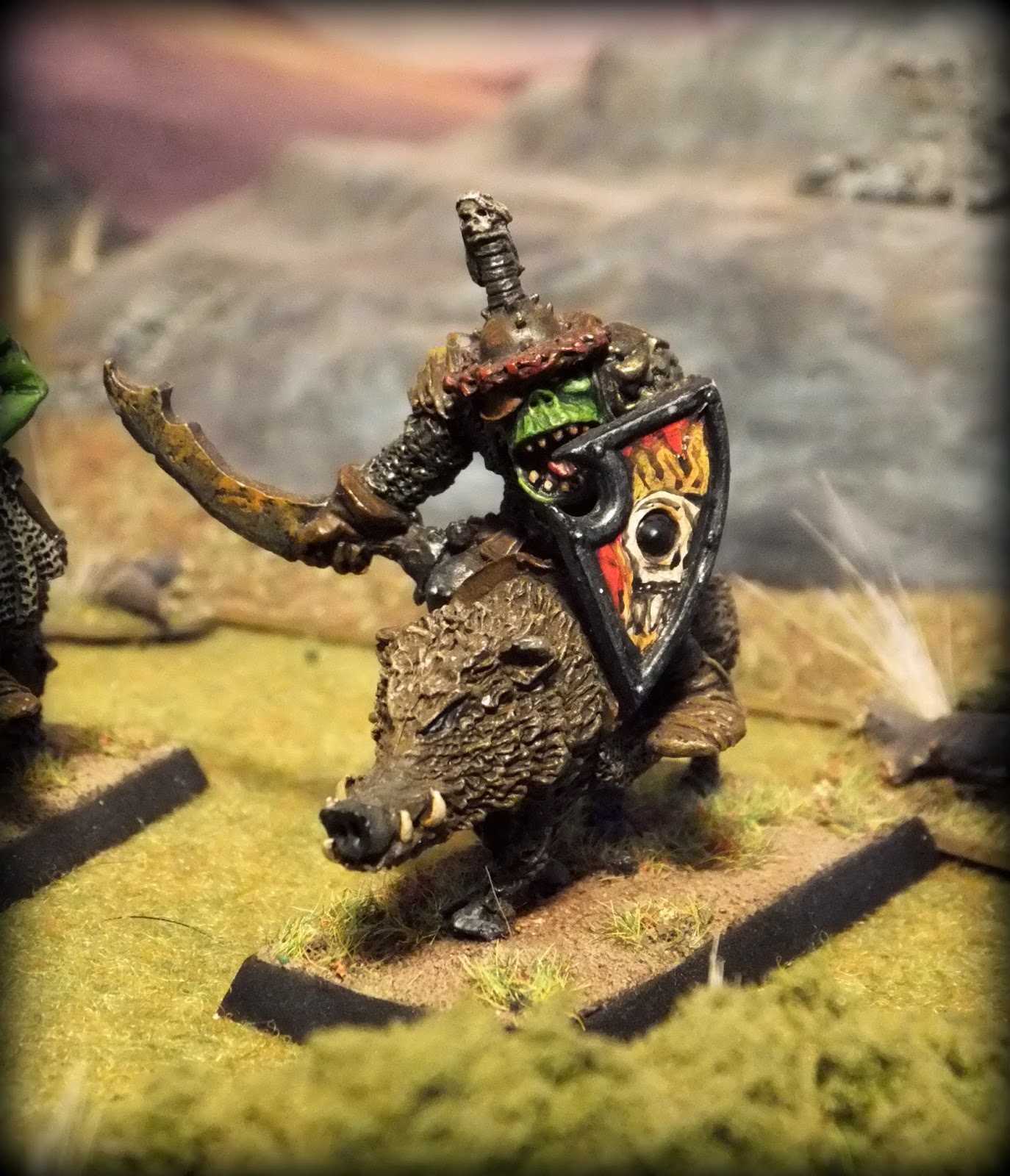 I've always been a big fan of these miniatures - the armour looks pretty outlandish on some and the helmets are fantastically over the top! 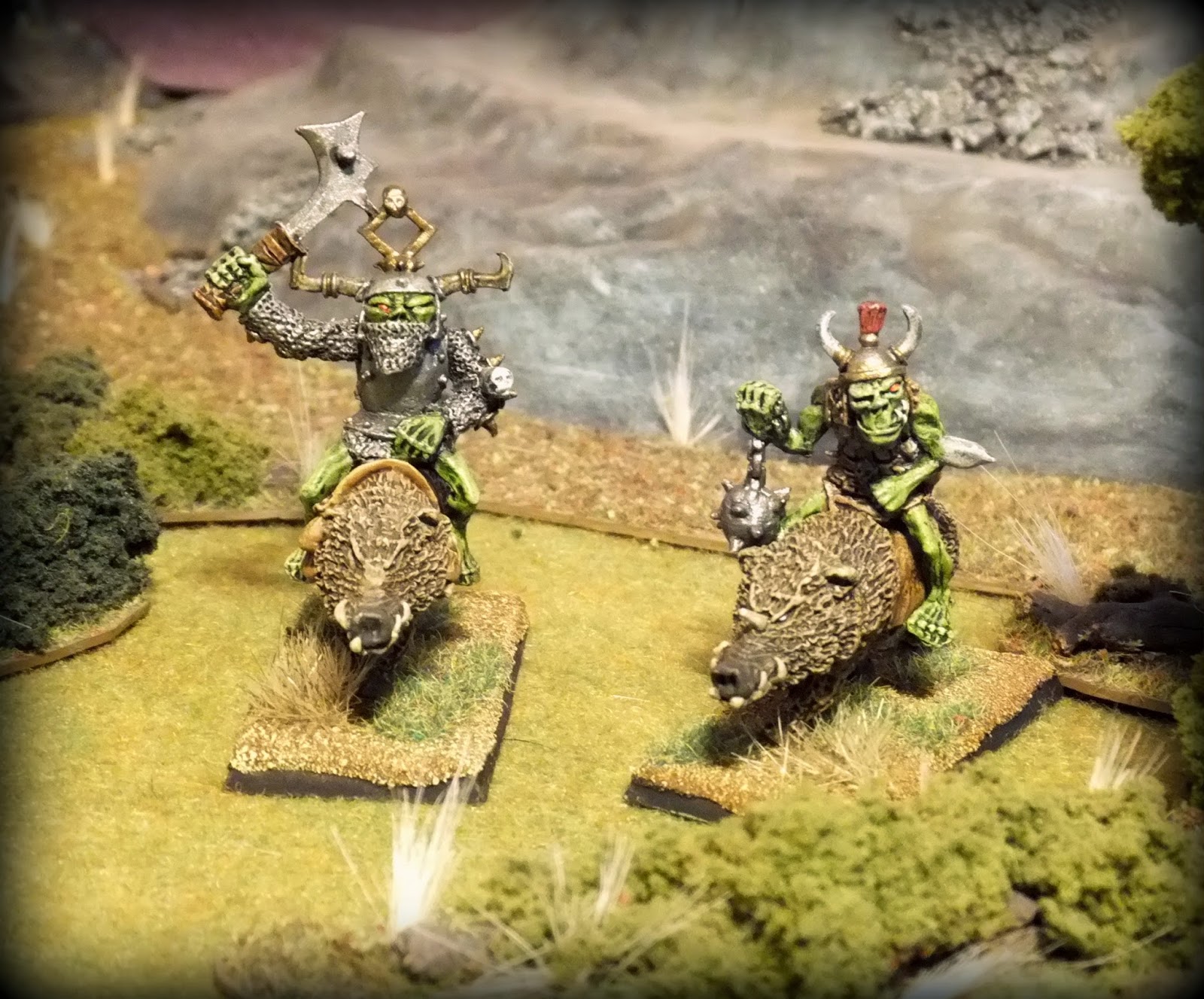 I ran out of Citadel boars so will have to look out for some more along with the few other riders I need to complete the set - this chap on the Marauder boar will probably have to be transferred to the 'Eavy Brugayd then - sorry mate! 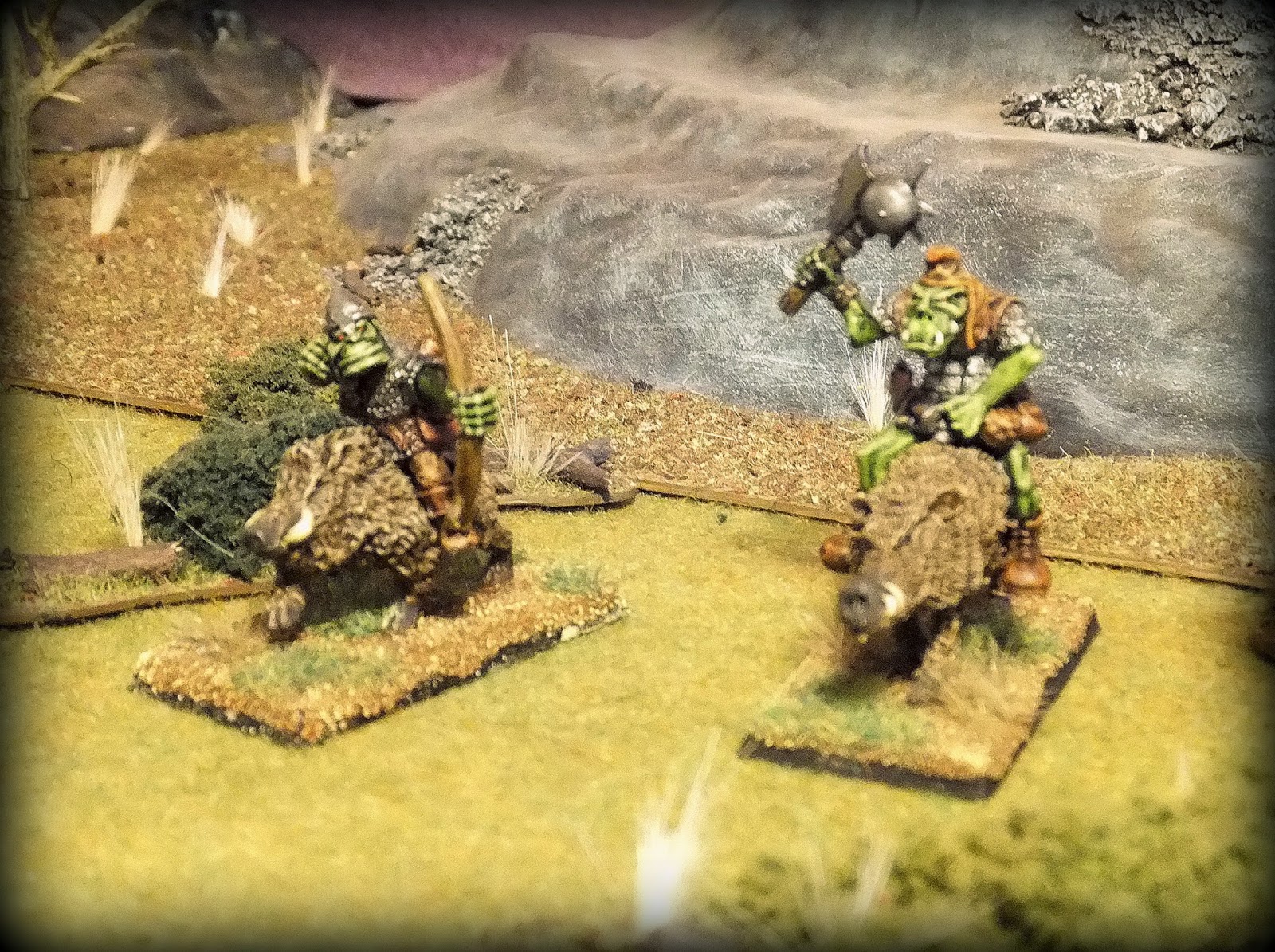 Orc infantry up next...

This has to rank as one of my guiltiest listening pleasures of all time but since I stumbled across this track on Youtube (probably thanks to one of Orlygg's posts on the Hungry Troll games I might add) it has oft times been played on heavy rotation to get me through large swathes of batch painting what else - Gobbo's!!! 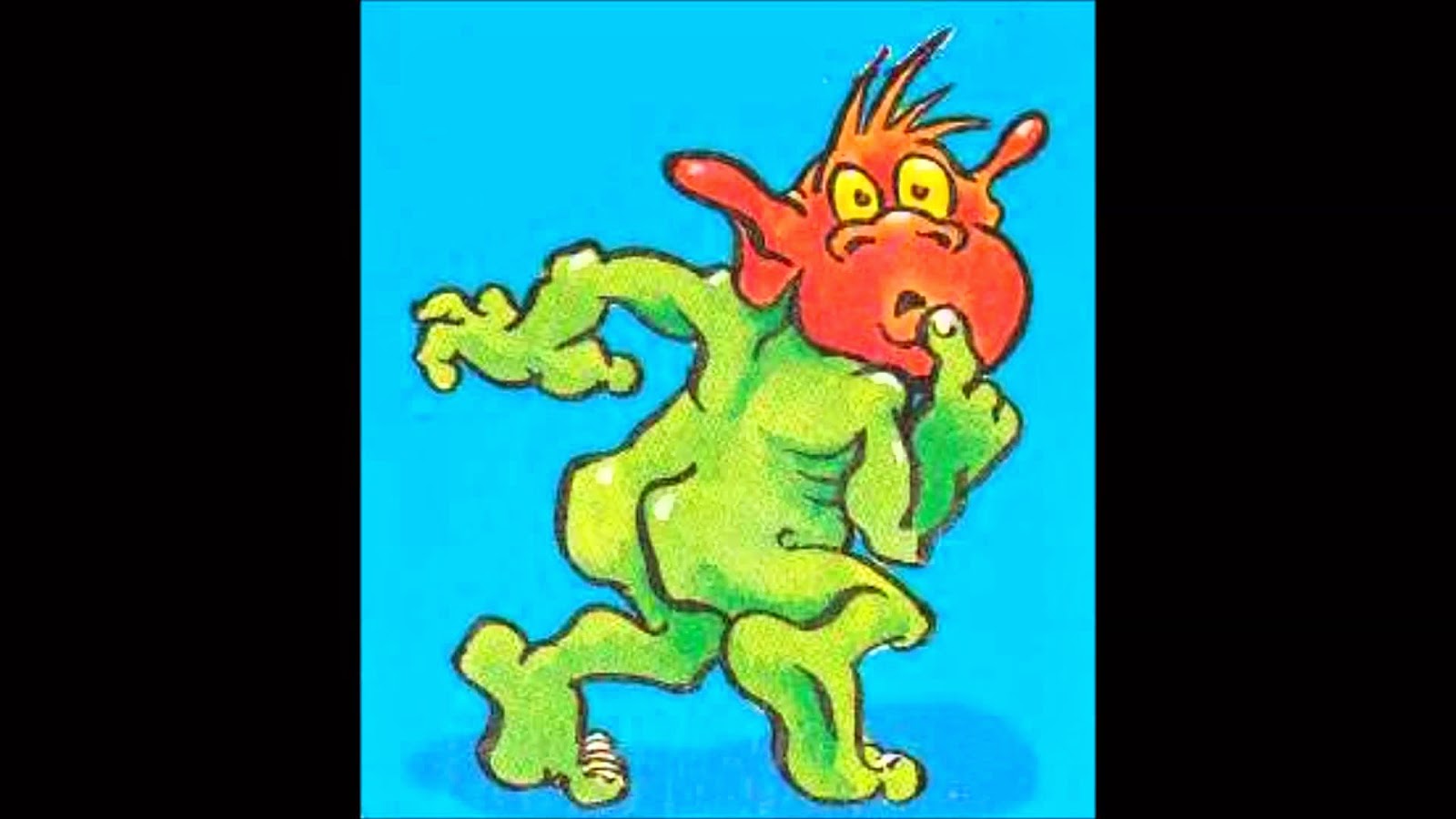 So here's a slightly closer look at the smaller and more wretched end of my Goblinoid horde.