Armed to the tusks!

Ruglud's Armoured Orcs have featured on this blog a few times before and here they are again. This time they are fully equipped and finally finished! 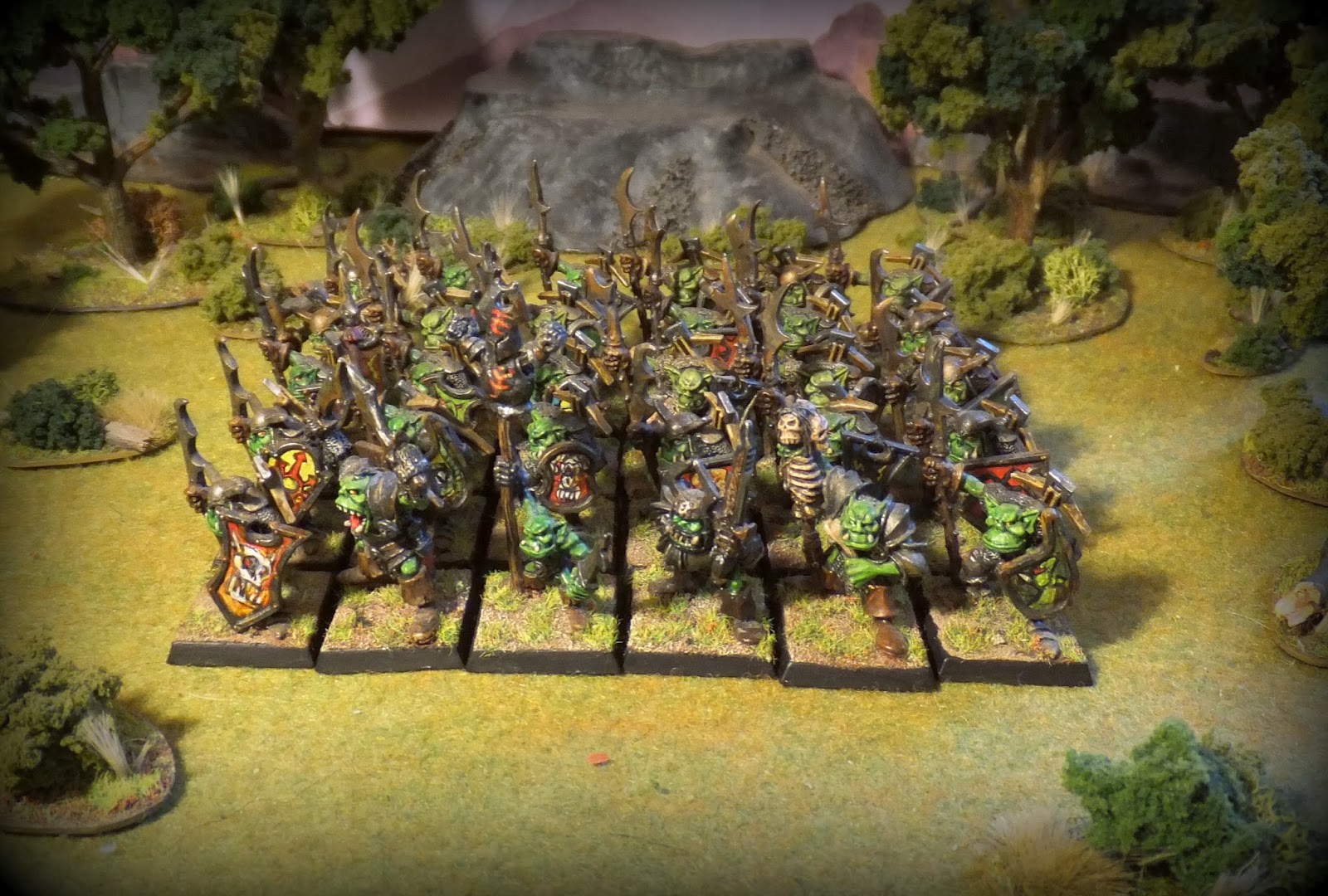 ﻿
Some time before Christmas I managed to snaffle a bargain on ebay consisting of an incomplete set of this Regiment of Renown along with various other goodies (more of which another time), all packed up in the original box. Unfortunately the box had had sellotape wrapped round it for some reason but the collector in me is at least partially satisfied!﻿

However, it wasn't the box, or even the additional plastic crossbows I needed to equip each trooper that had me jumping with joy. Rather tragically it was the long bases that you can fit three minis on that really got me excited - sad I know. 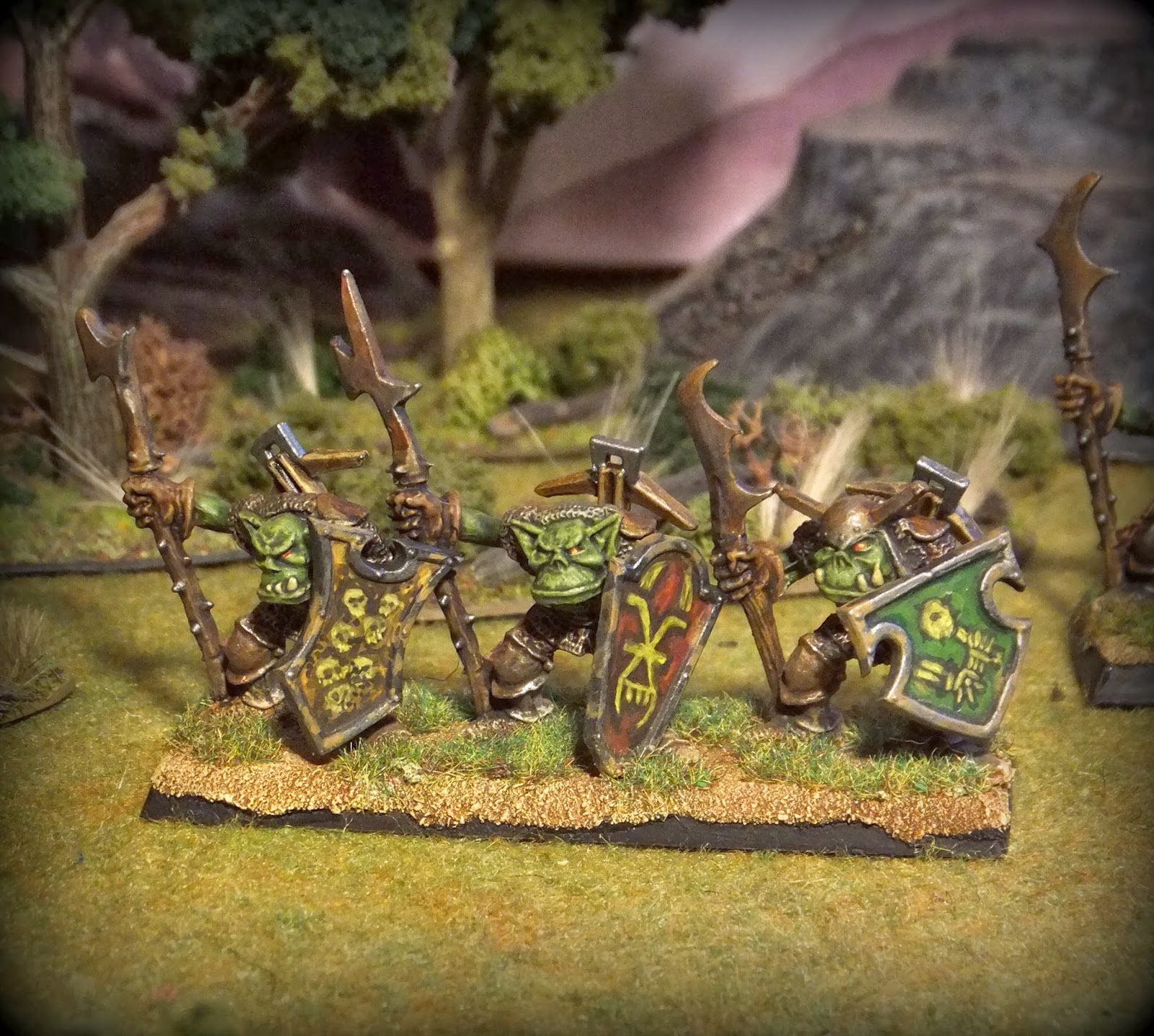 Maybe it was the years of ogling Kev Adams' Goblin army in the Warhammer Armies book that had instilled this strange desire of mine to possess and base some of my minis on these longer bases - who knows! 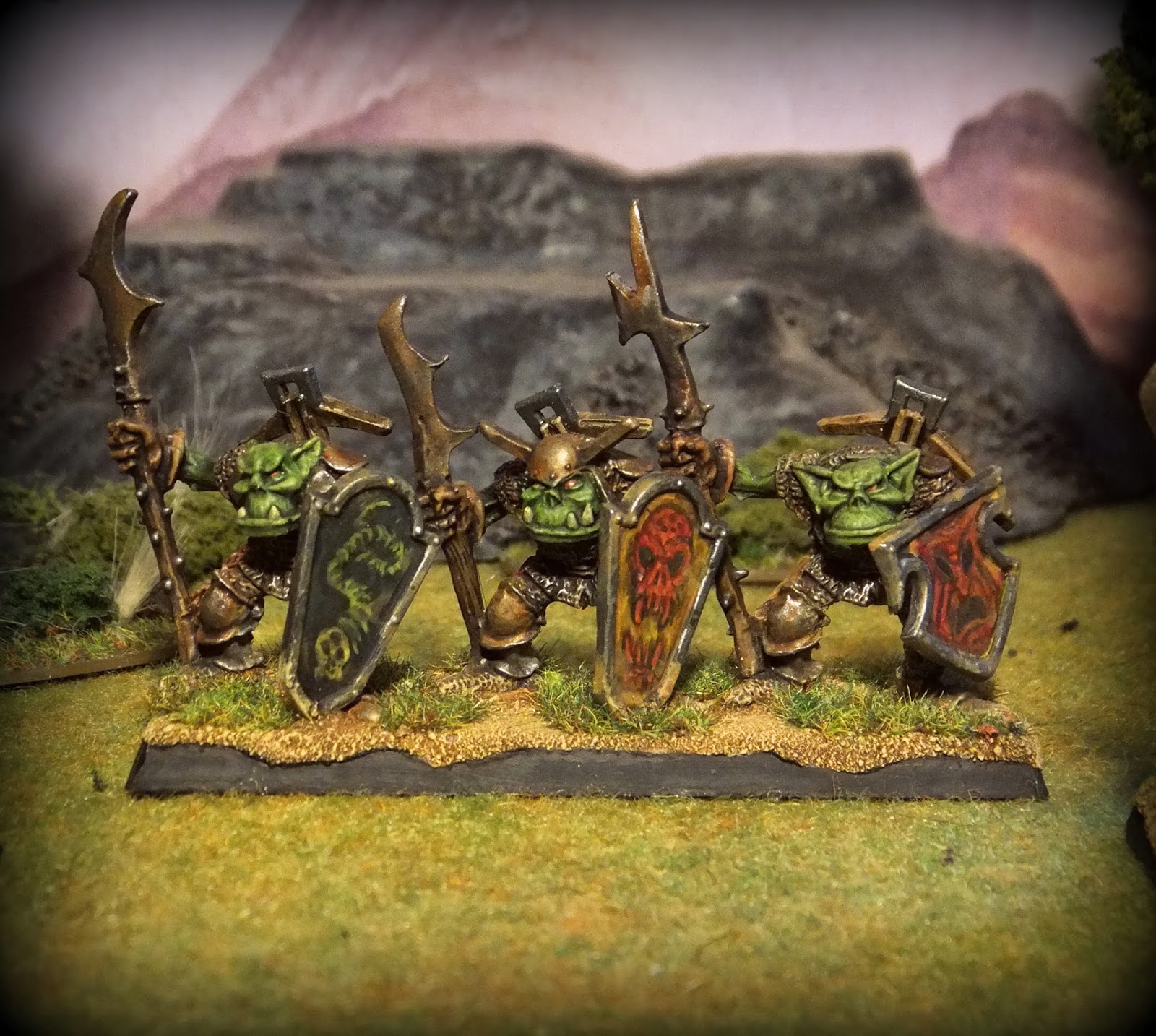 Anyhow, I am now able to field a rather formidable looking 30 strong unit of armoured Orcs, complete with crossbows - ah deep joy. 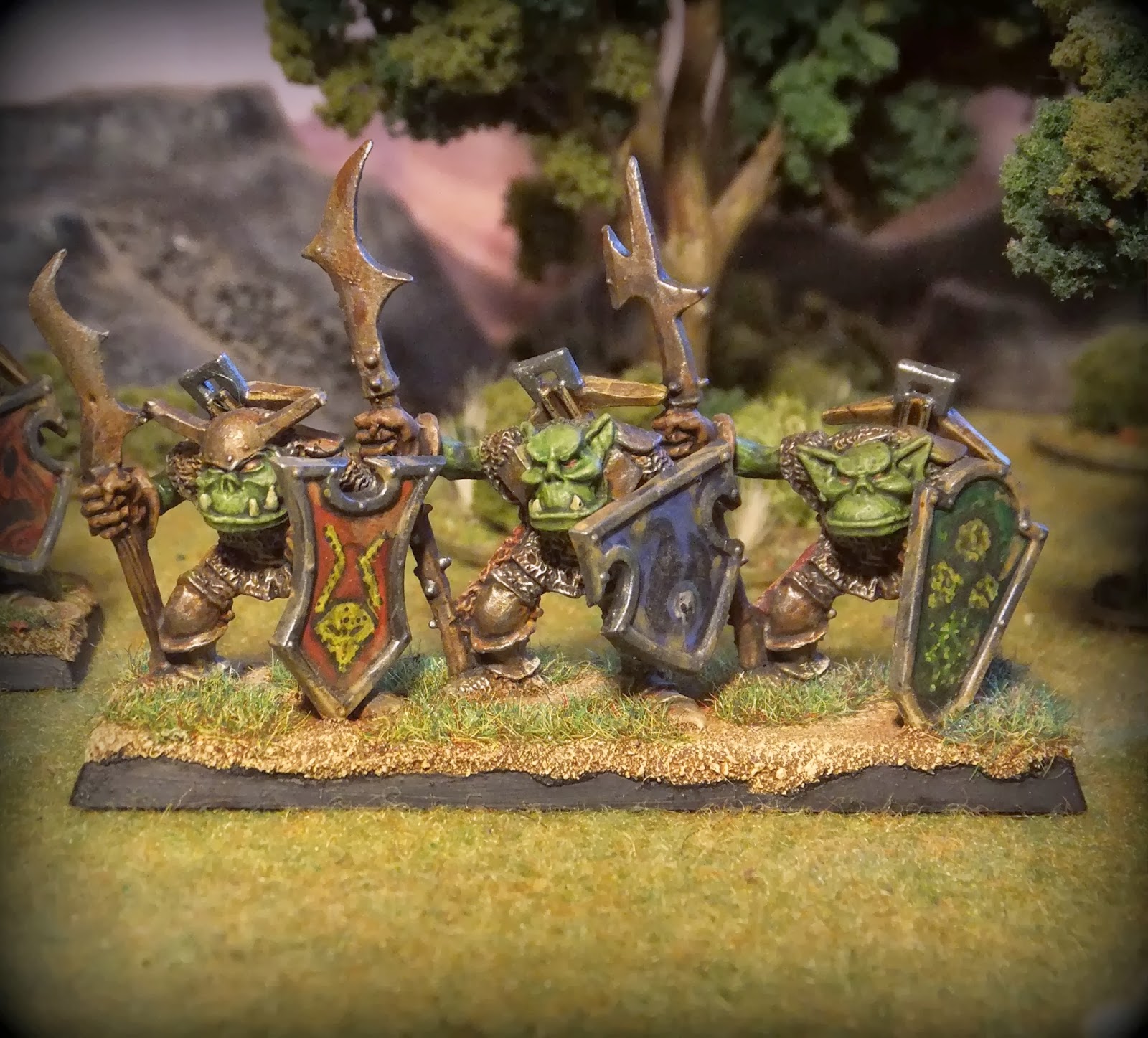 Some of my down time before Christmas was spent happily painting up the additional members of the unit and basing them. I had another good go at copying freehand some of the Arcane Armourials as featured on the troopers on the box. 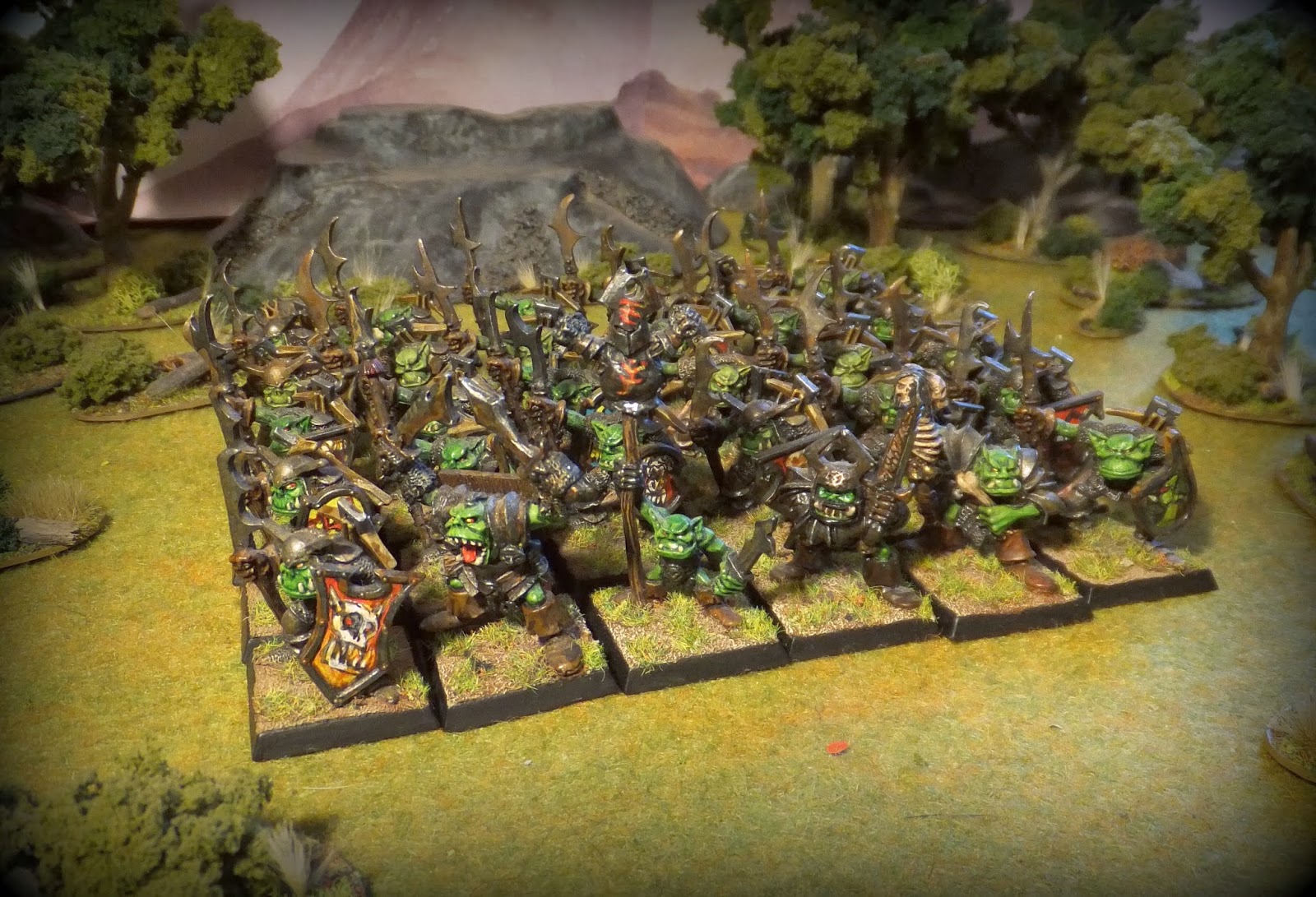 So, with more equipment than you can shake a stick at (heavy armour, shields, hand weapons, halberds and crossbows), and a level 10 and 5  hero to lead them, standard bearer, musician and +3 rank bonus with two more ranks to spare - is this the first Oldhammer "Deathstar" unit?
What with these chaps and my overpowered Zombie Dragon (Rick Priestley's rules in the back of an old WD - not mine!) I might be accused of slowly turning into a power gamer... ; )
﻿
Posted by Thantsants at 06:05 20 comments: 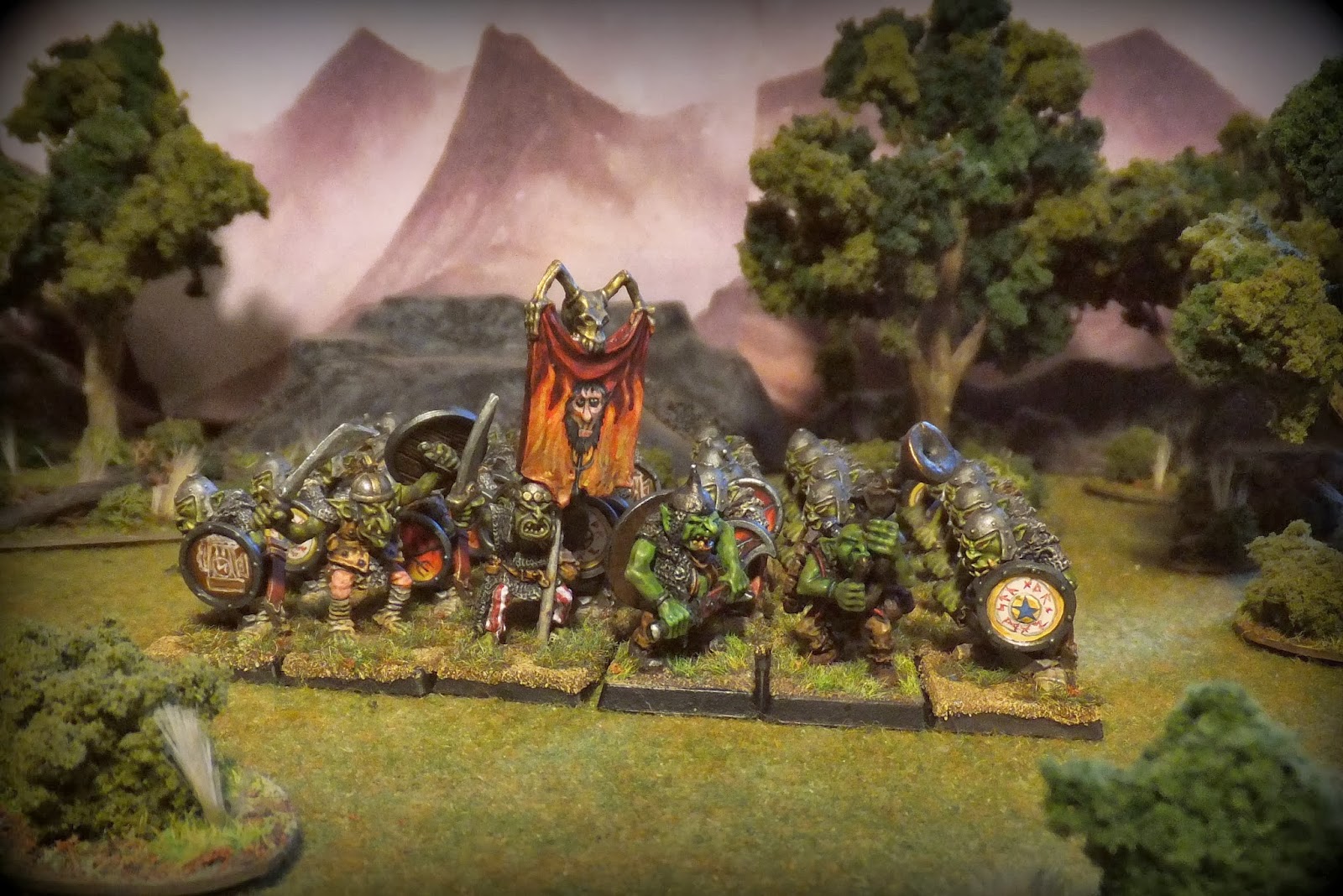 According to legend he initiated the Goblin Wars by slaying Wulfrun Willowhand, King of the Northern Dwarves in some kind of drunken bar room brawl. Many victories and atrocities have been attributed to "The Paunch of the Misty Mountains" - so named because of his morbid obesity. In fact it was said that Grom was so huge and ugly that he almost resembled an ogre - not sure about that one but I do love the minis! Chiefly remembered among his many black deeds were the atrocities of Zhuf Field. After the Goblin victory there and subsequent looting of the Dwarven Smithies and Armouries, Grom called for a hundred Dwarf captives to be brought before him each day. Each day he personally suffocated each and every one of them - by sitting on them.
Grom was not a pure breed of Goblin (if there is such a thing) and neither were the Goblins he selected to make up his Goblin Guard - large and vicious creatures of mixed Orc/Goblin parentage. I'm thinking of upping their stats and points value to that of Half Orcs.
Enough of the history lesson and on to the miniatures! The troopers were all speed painted in batches using the usual grey basecoat with drybrushed white highlights and black ink wash. Then the base colours were applied in thin washes with ink washes to bring out shadow and colour. Ironically the shields took about three times as long as the Goblins themselves!

The designs were rather fun to do. They are supposed to represent various aspects of the death of Wulfrun Willowhand at the hands of Grom. There is a somewhat veiled reference to Grom's personal shield design in that it depicts the death of Willowhand with a great deal of blood and the fabled toasting fork very much in evidence! 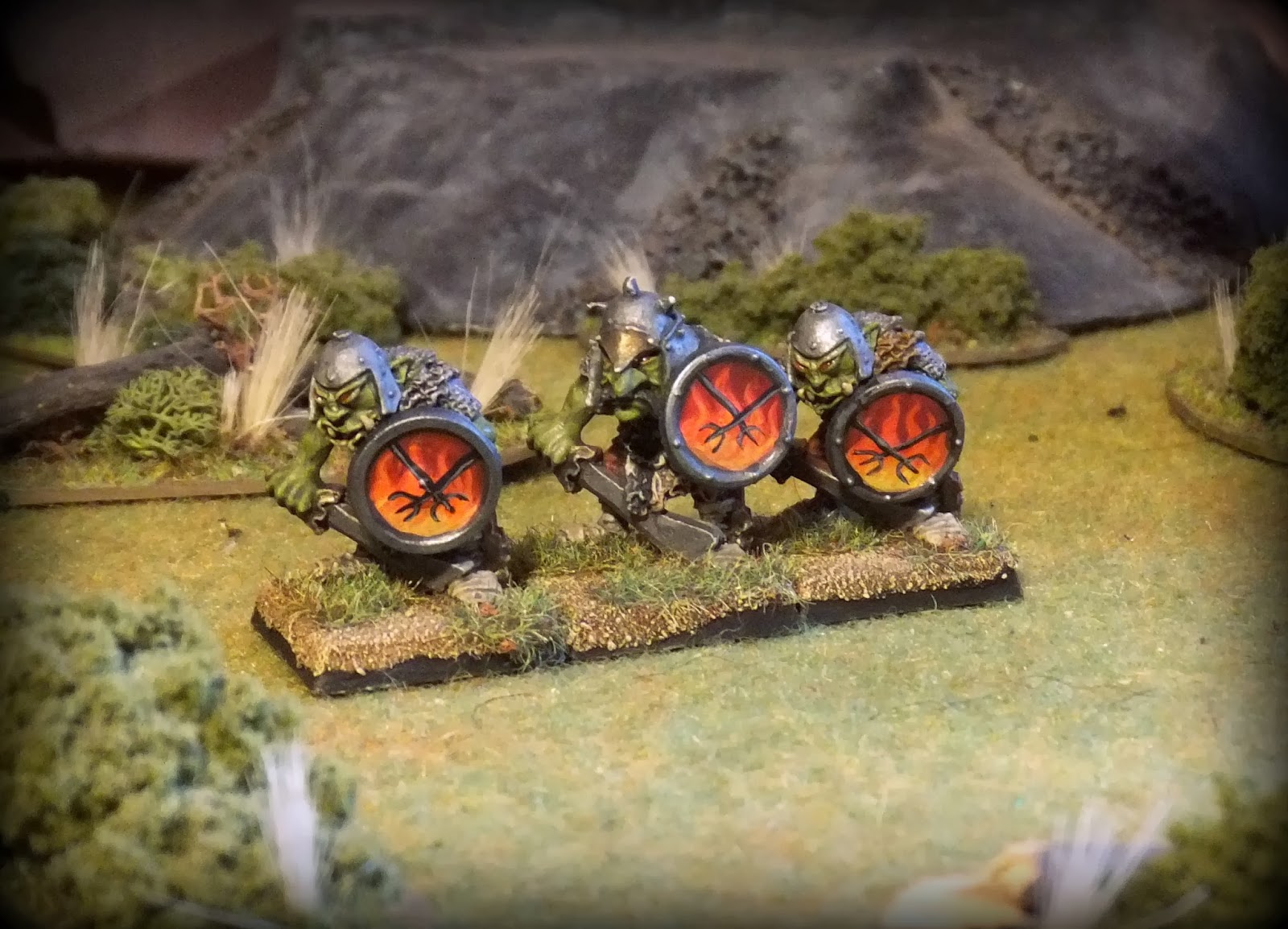 Well I couldn't resist a reference like that so various troopers ended up with crossed toasting forks in tribute to their leader... 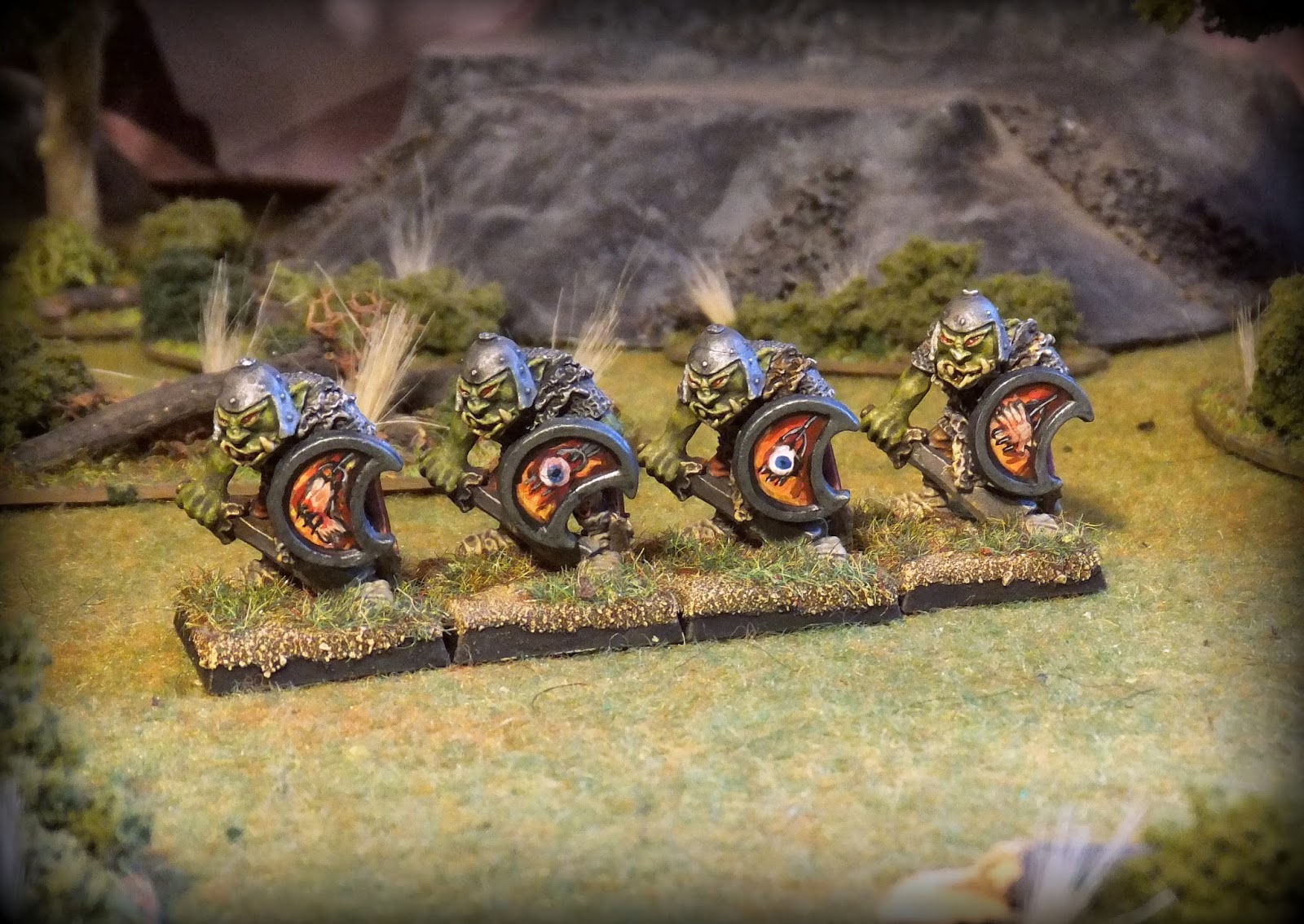 and various bits of Wulfrun Willowhand being toasted on said toasting fork. 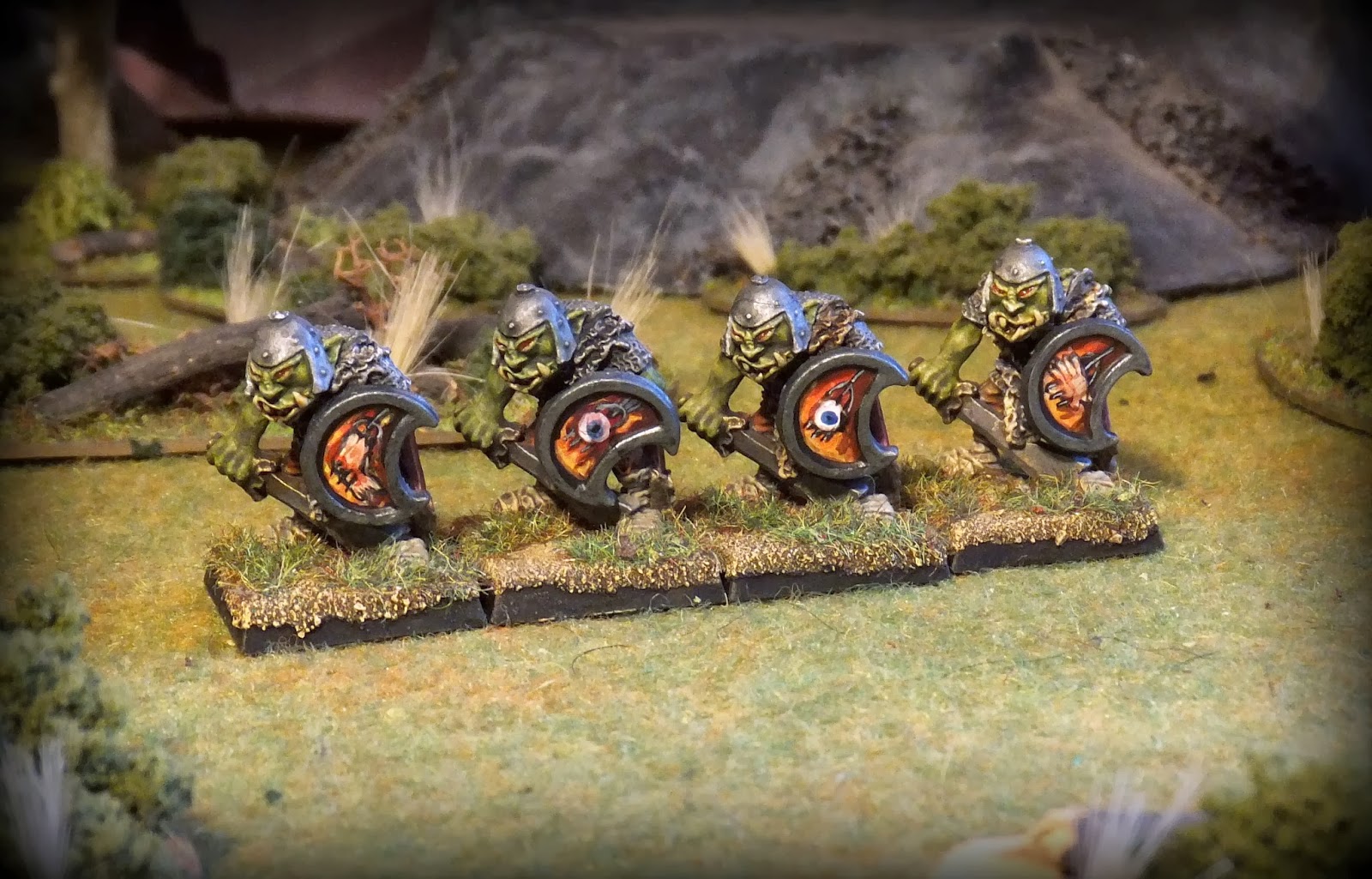 There is little mention about how this epic altercation started other than the fact that the relative merits of Bugman's Best and Old Sam's Brown were being discussed at the time. This also provided some inspiration for shield designs - a brown take on the Bugman's Rangers' shields for Old Sam's Brown - every Goblin's favourite! 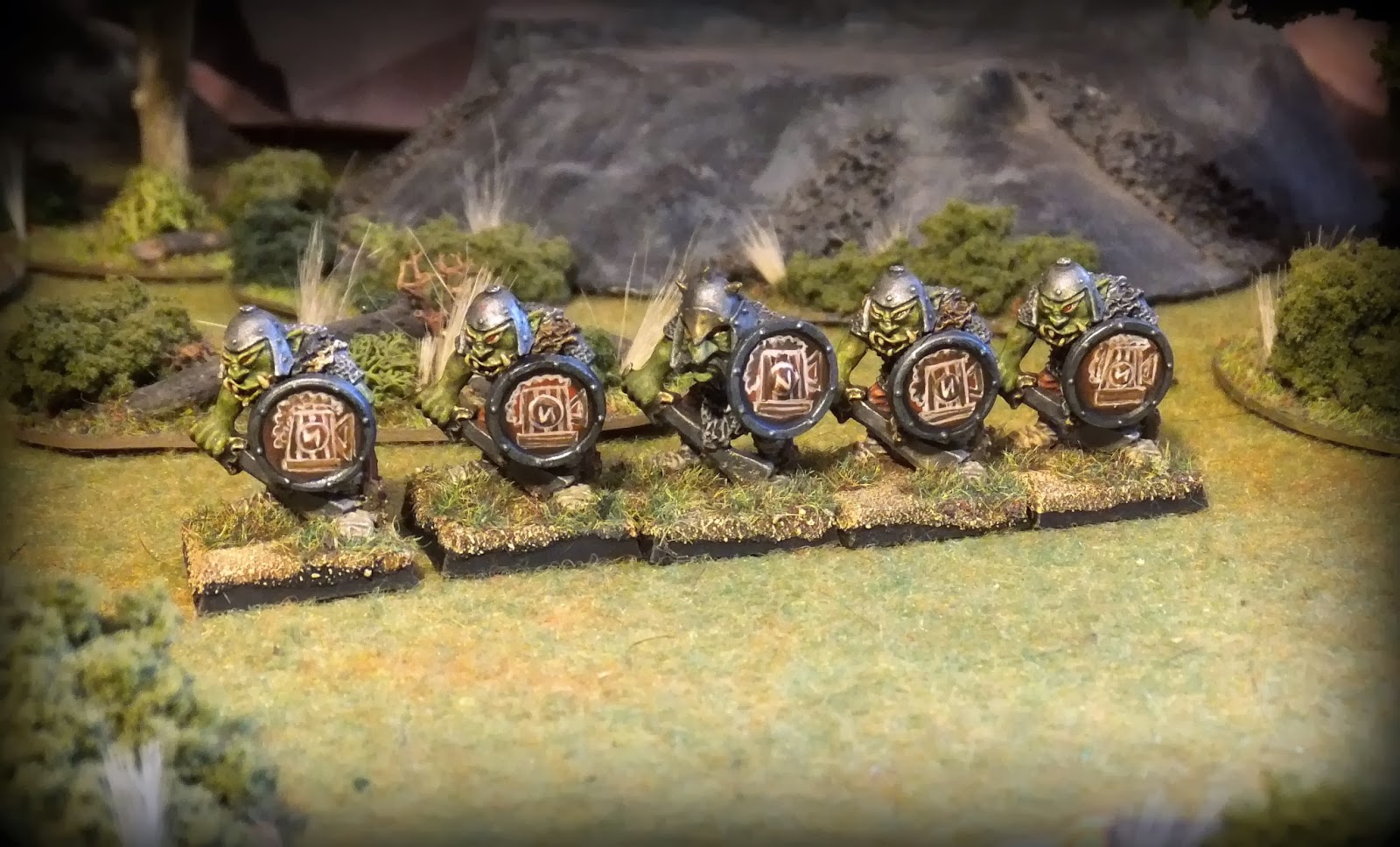 Some of you familiar with a certain Brown Ale from the North East of England might recognise the logo on the following shields... 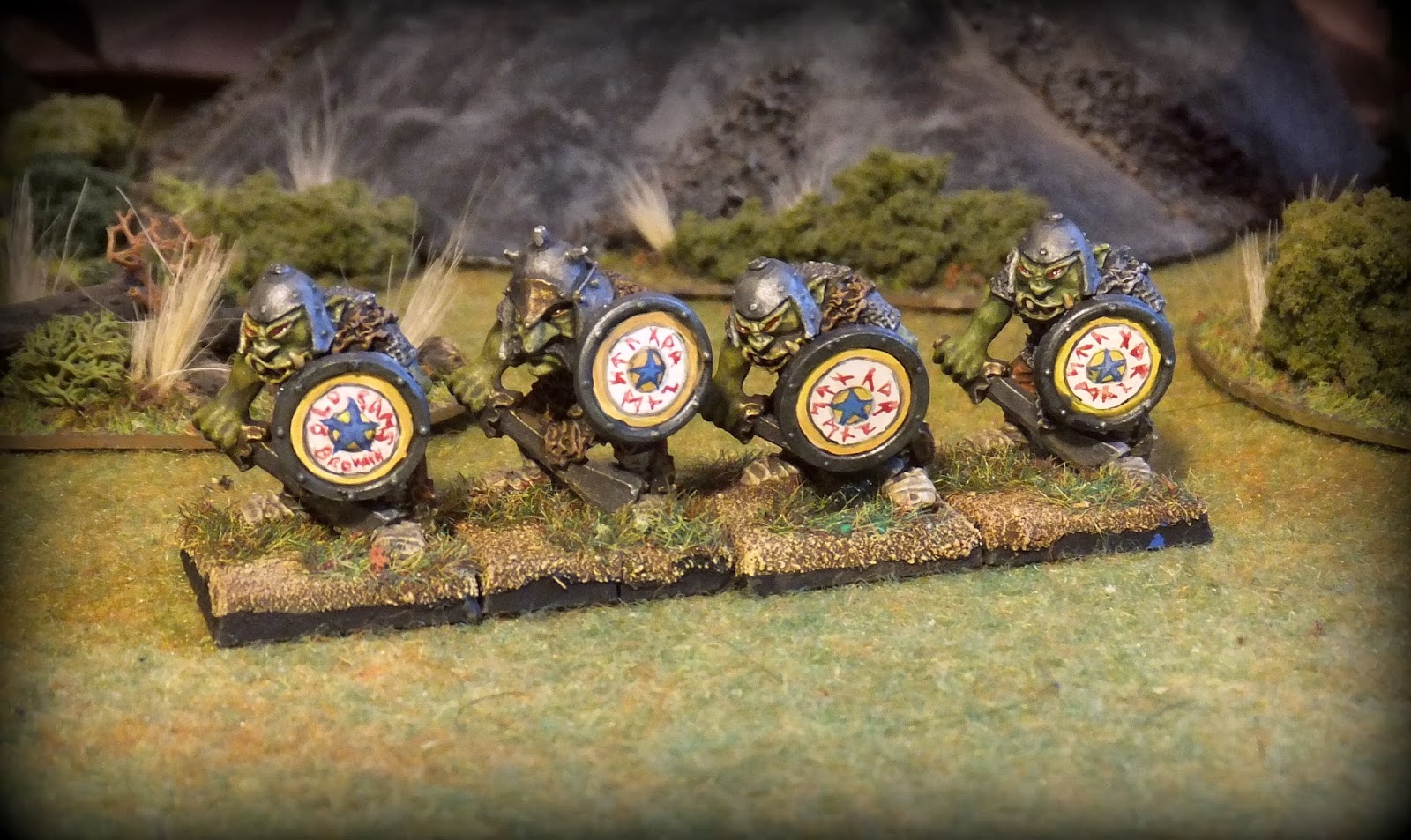 Old Pukey Brown certainly is a refreshing brew and the choicest of spoils for any self respecting Gobbo. 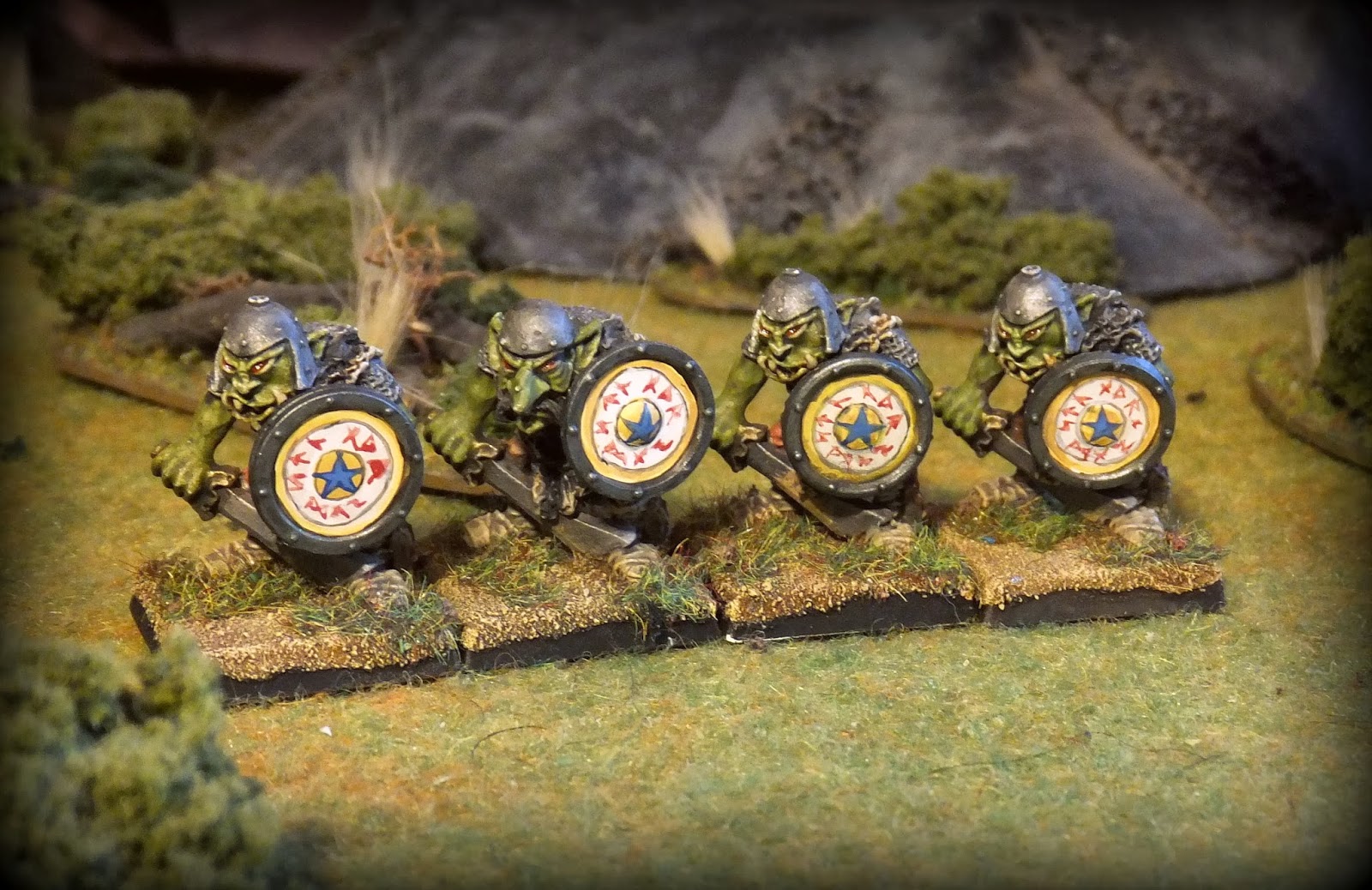 Ironically Grom's champion, Crud Longbone, happens to be extremely skinny and lanky. Canon and Ball anyone? 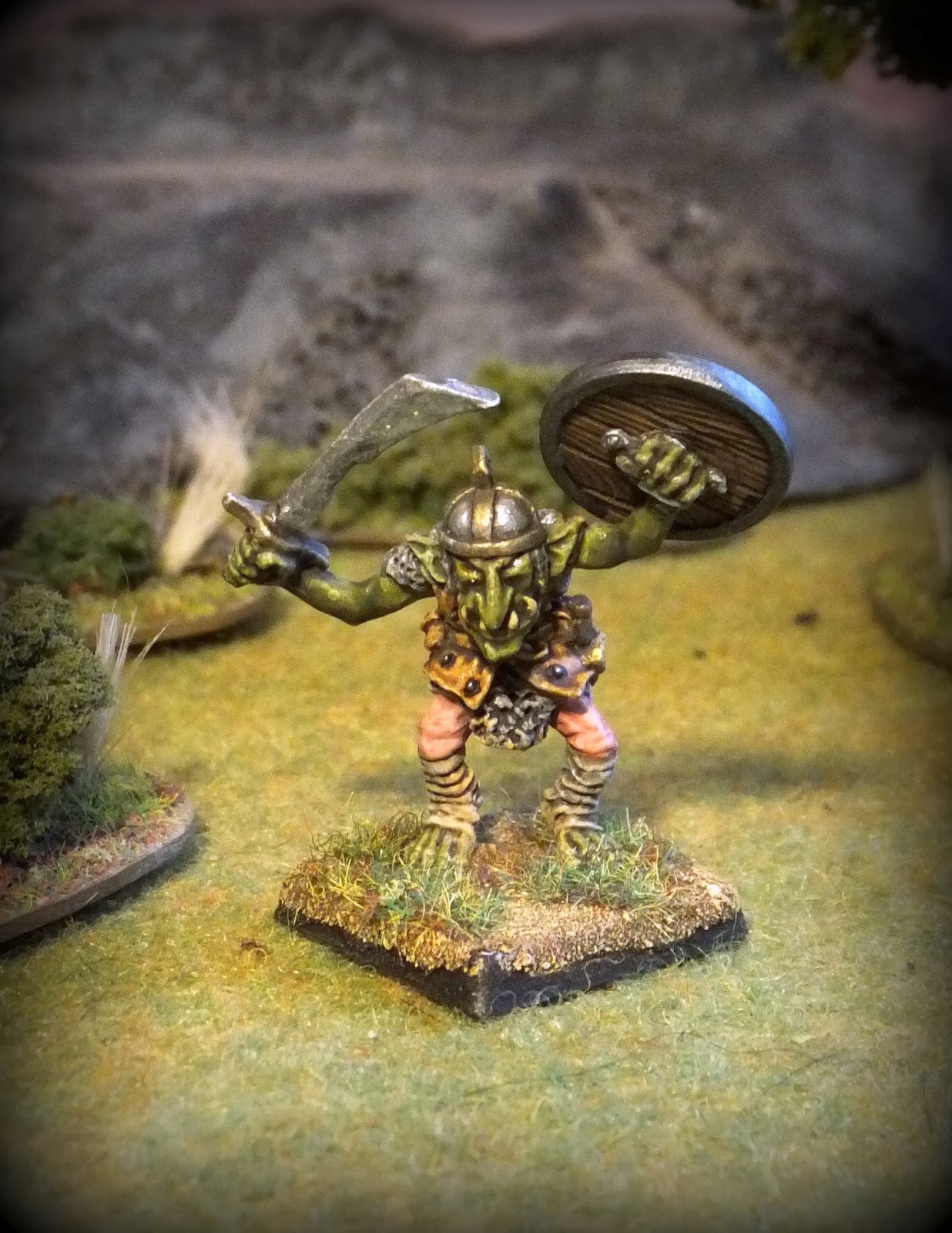 Interestingly several variants of this chap are included in the larger unit of regular Goblin warriors I have yet to paint. 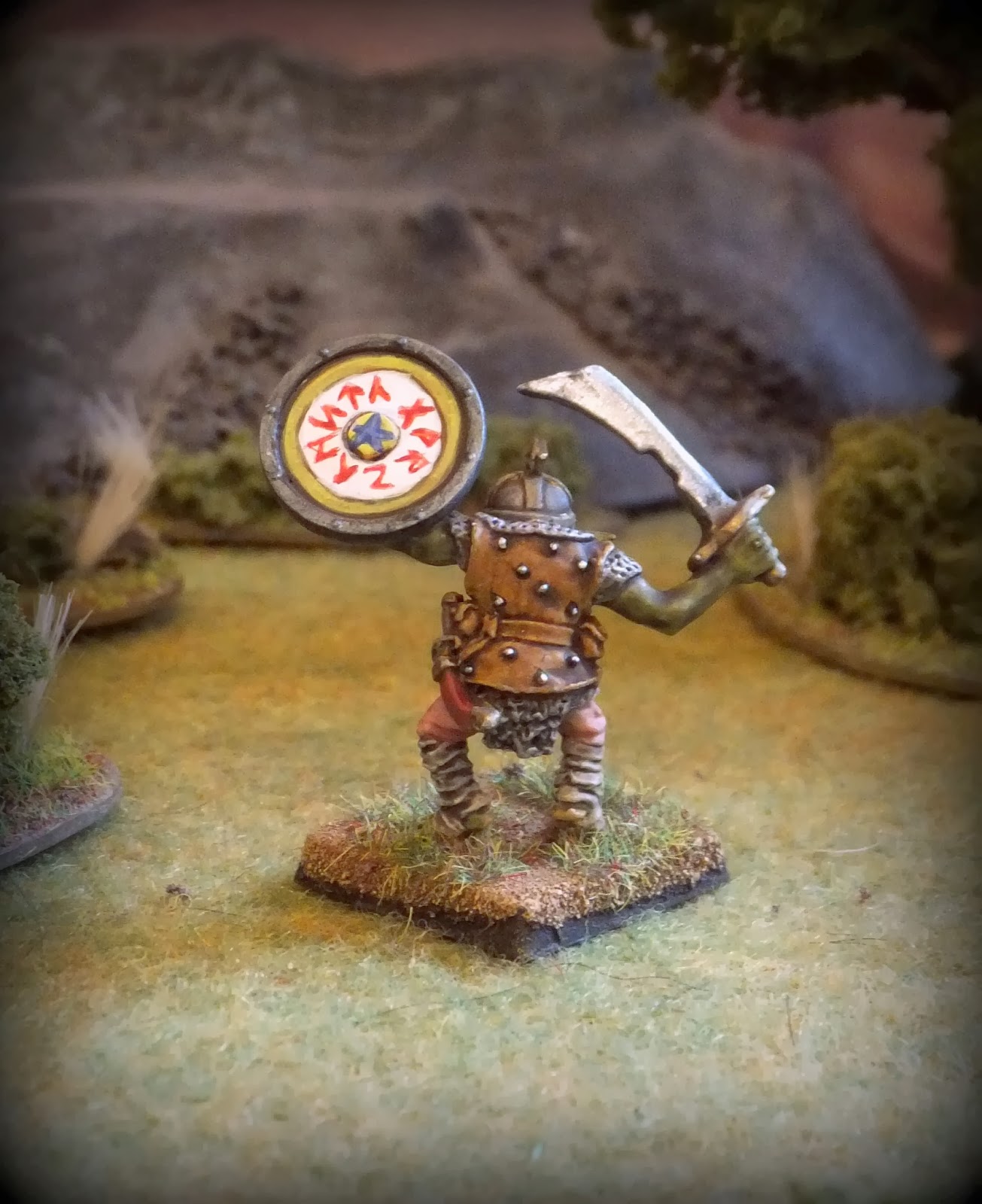 Grom himself in all his Ogre-ish(?) glory. 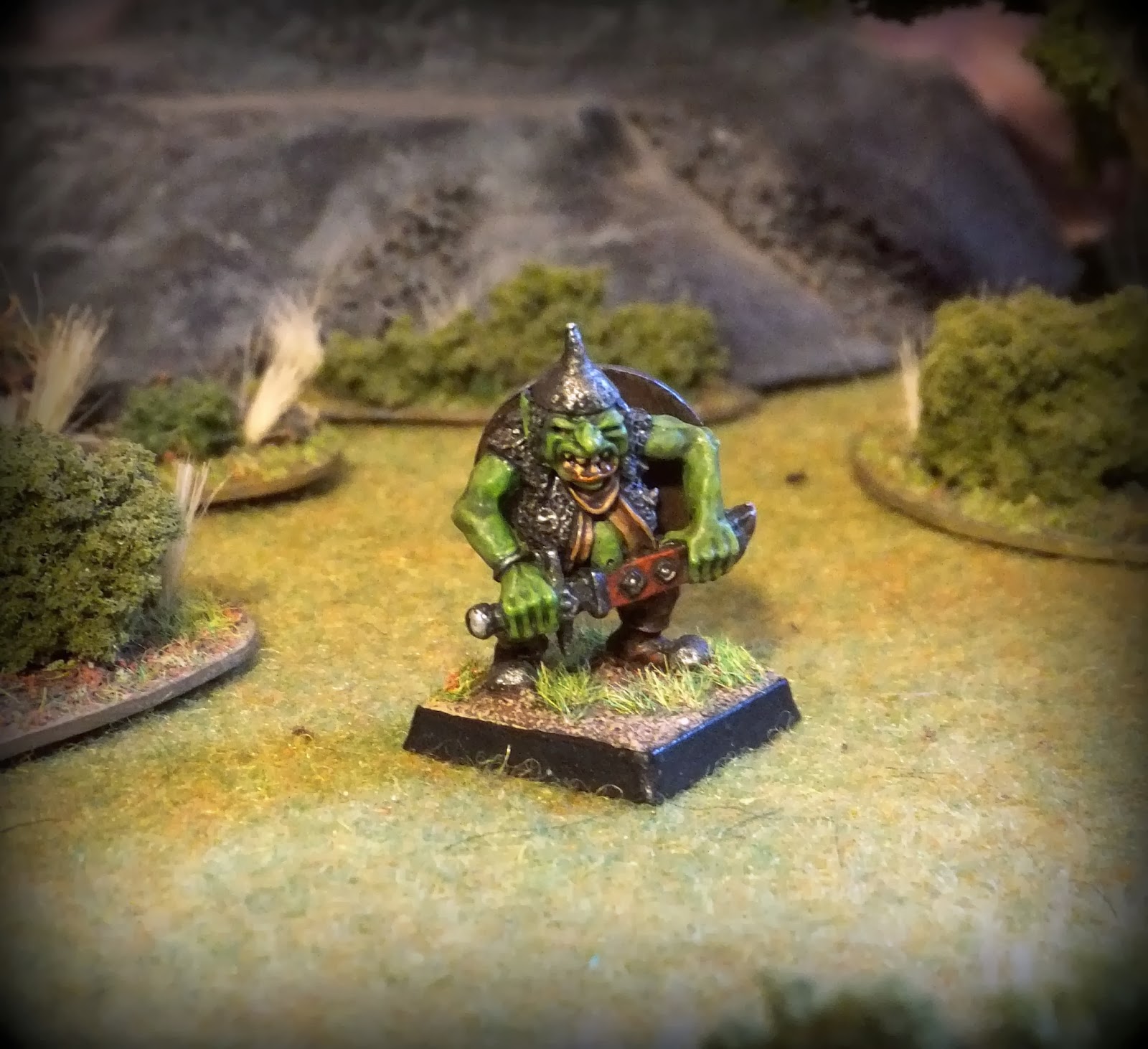 And his shield - I restrained myself from depicting the toasting fork stuck in the part of Wulfrun's anatomy that immediately sprang to mind and went for a more tasteful depiction of his head held proudly aloft on the improvised weapon. Thanks to a large shield boss he seems to have taken on a bit of a likeness for either Statler or Waldorf from the Muppet Show. 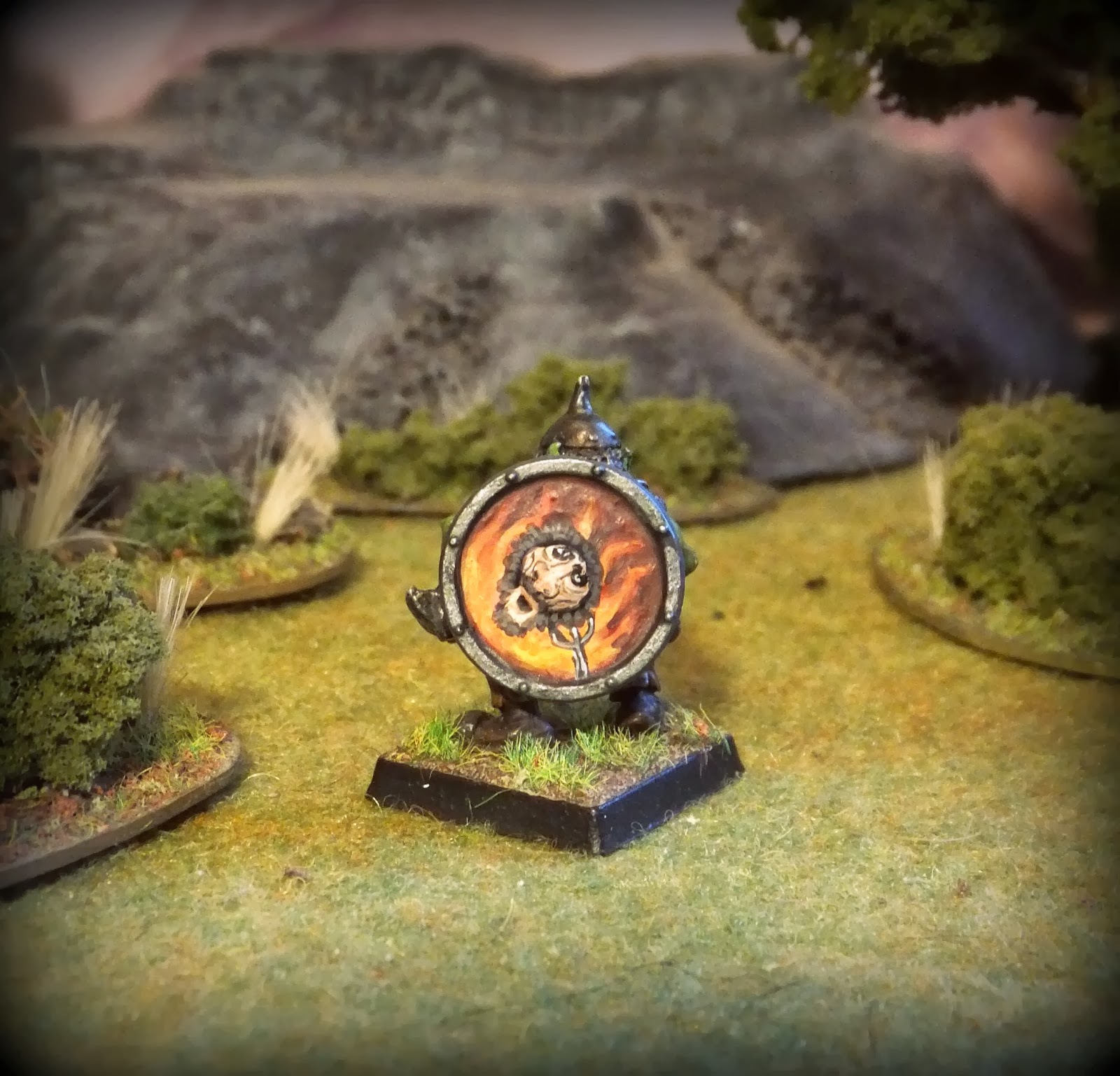 The Regimental musician - love the puffed out cheeks on this chap. I should probably give them a bit of a red tinge, although I'm sure Goblinoid blood is supposed to be green? 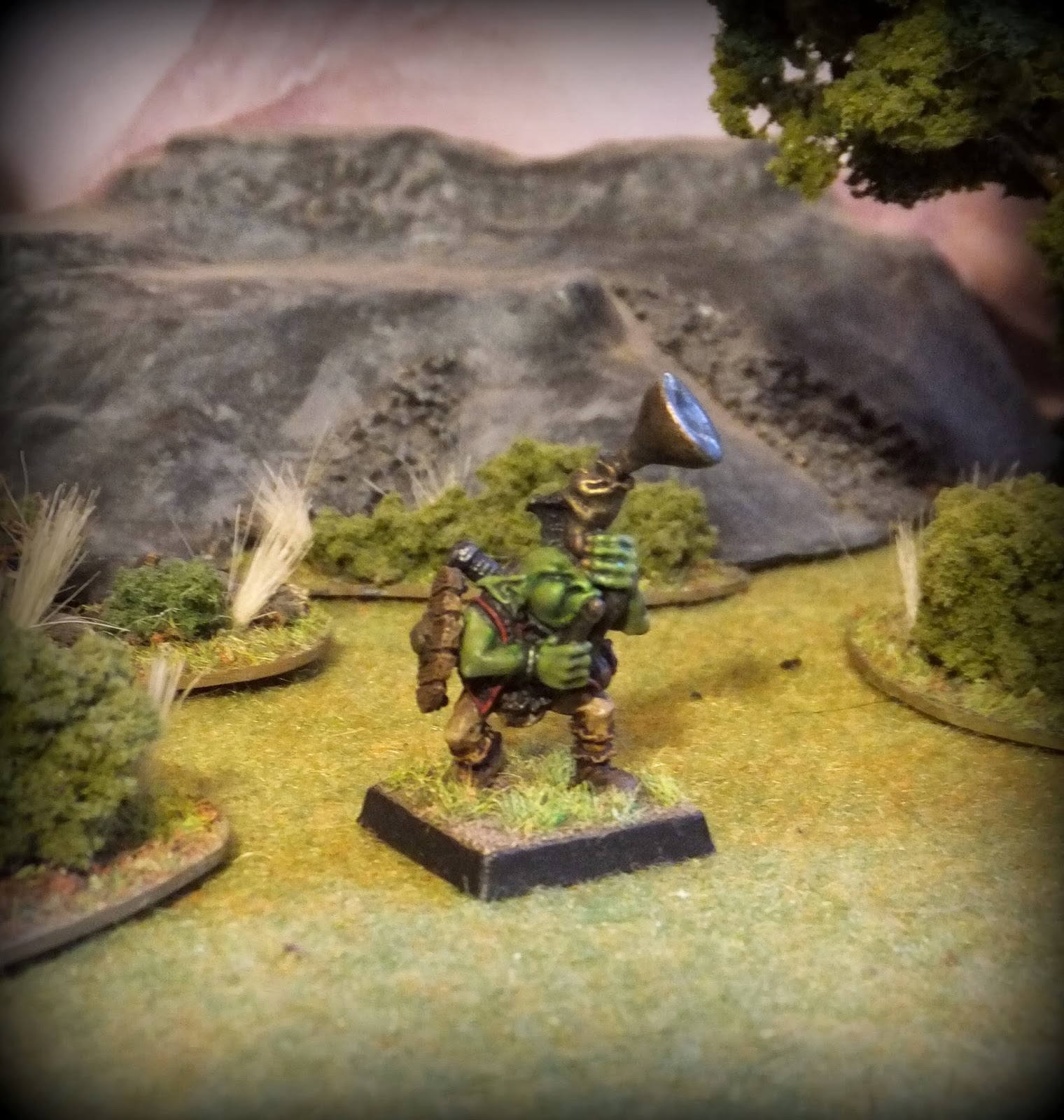 And the standard bearer with a slightly less cartoony representation of Willowhand's head toasting nicely before the fire. 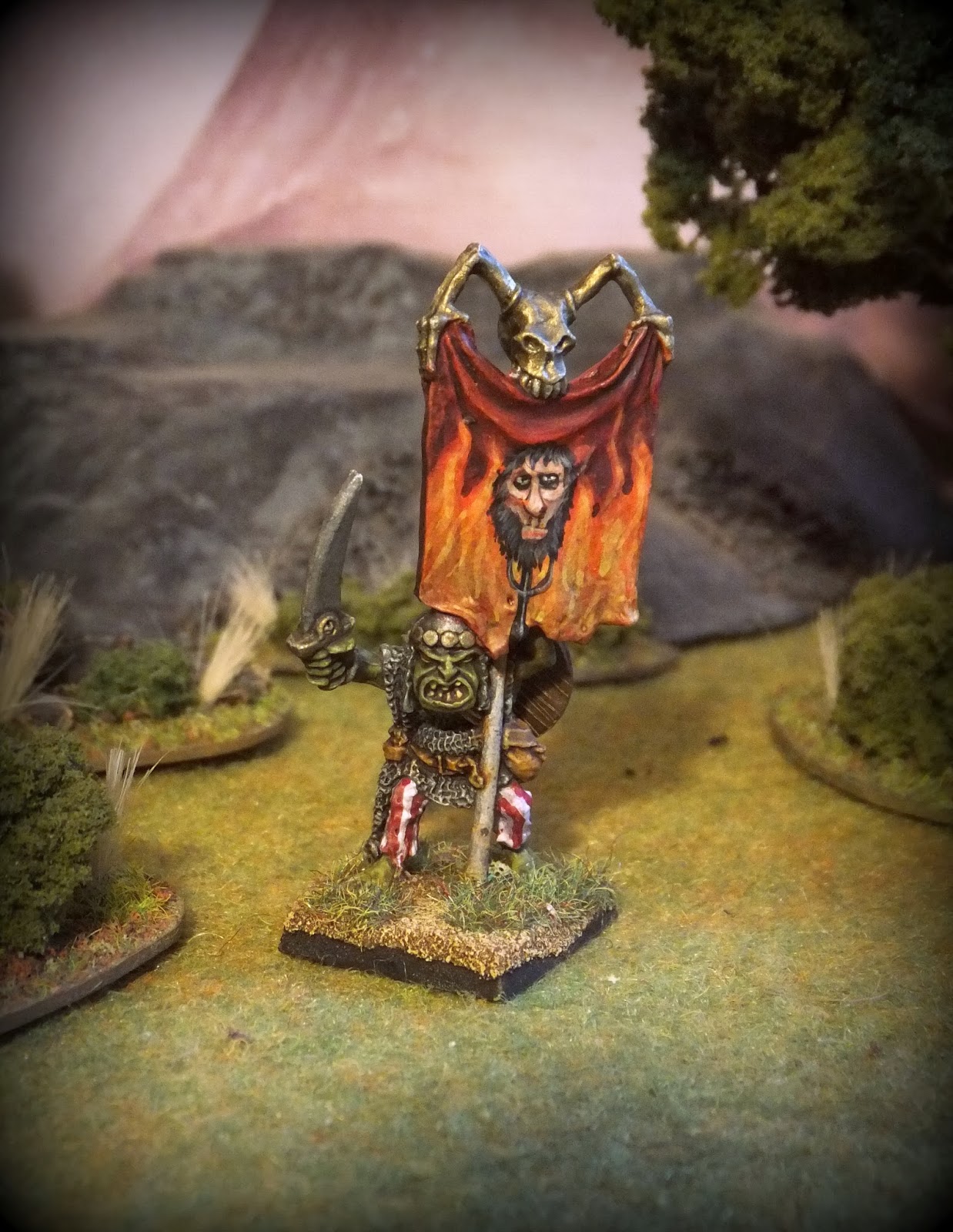 I think I was running out of ideas for shields by then so both he and Crud ended up with the Pukey Brown logo. 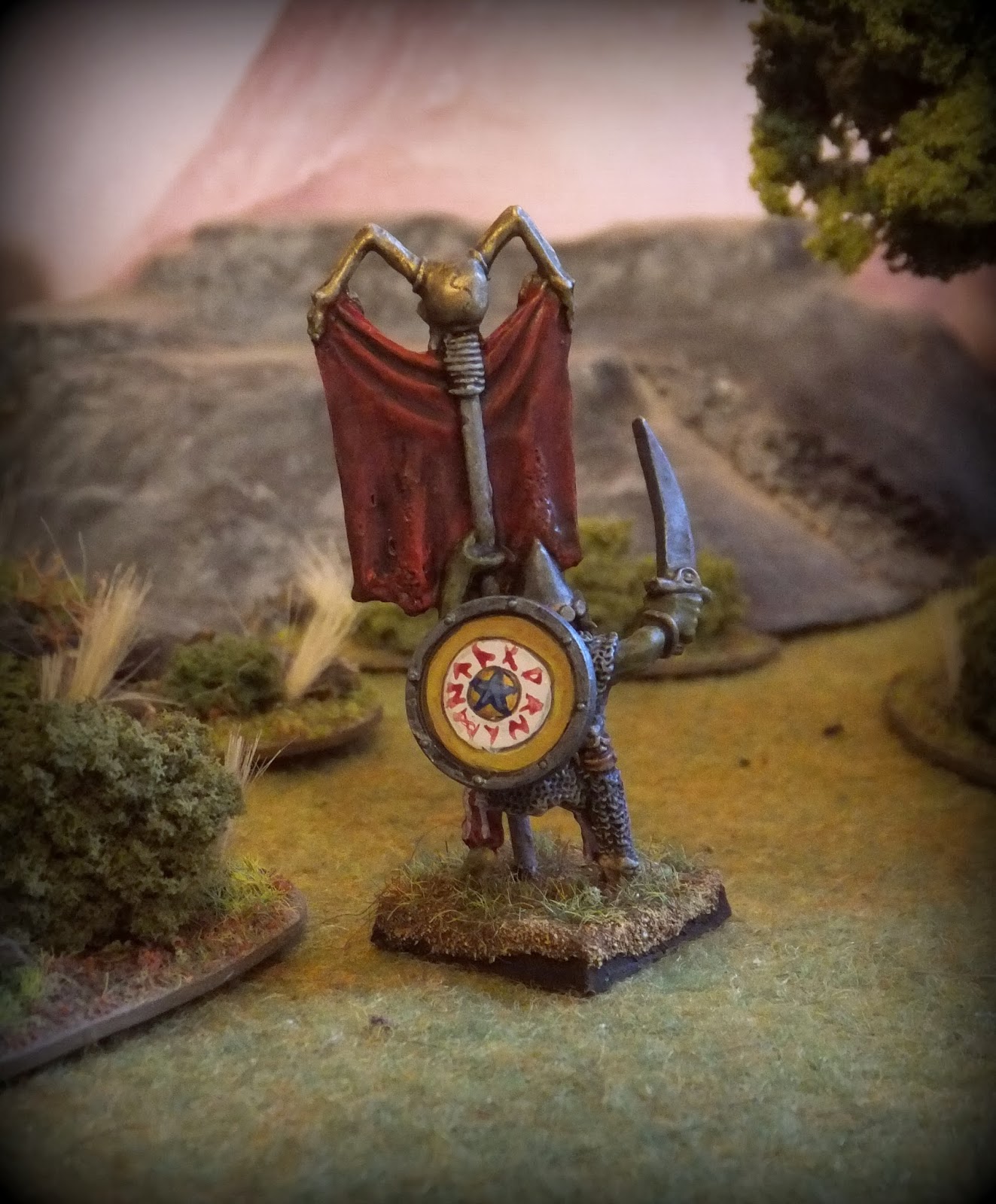 The Command Group together. 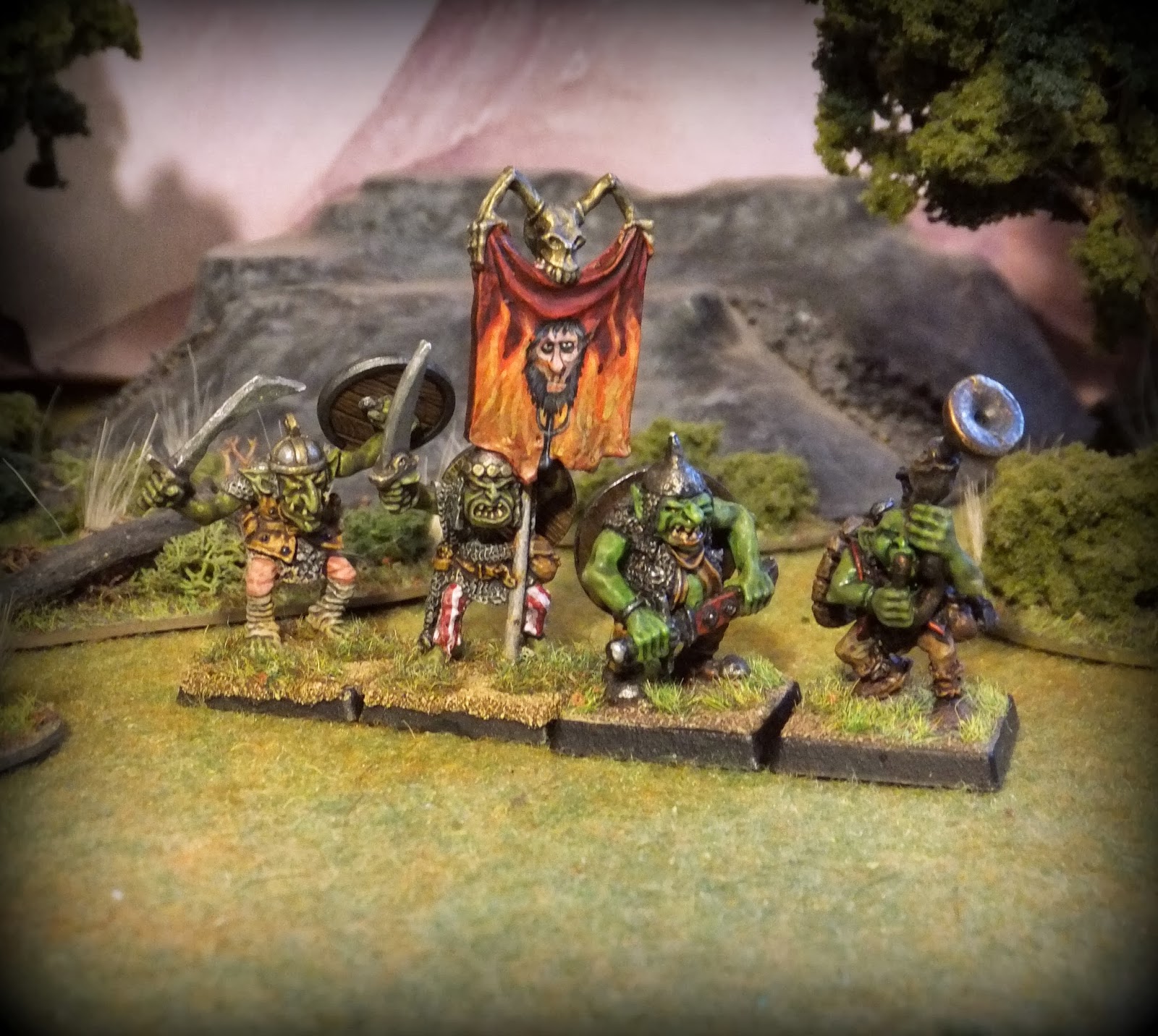 And the whole regiment once more. The more keen-eyed of you might have noticed the lone Gobbo on the back rank. Yes, annoyingly I have 31 minis for Grom's Guard and could really do with another 5 troopers to round them off nicely. 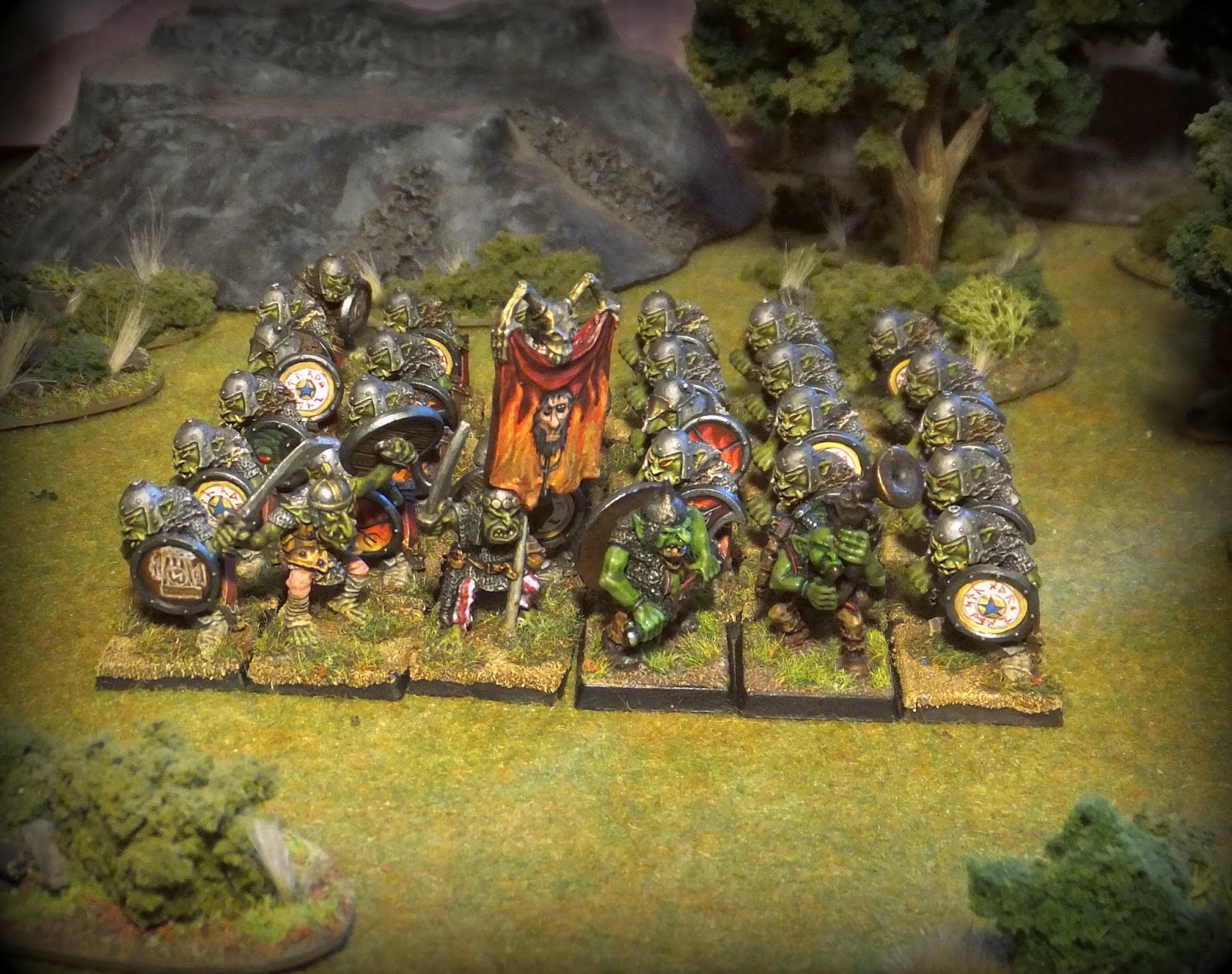 ﻿
Well thank goodness we've finally got January out of the way - now I can make some New Year Resolutions safe in the knowledge that they won't have to survive the rigours of the grimmest month!
As you might gather from the post title I'm going goblinoid again. 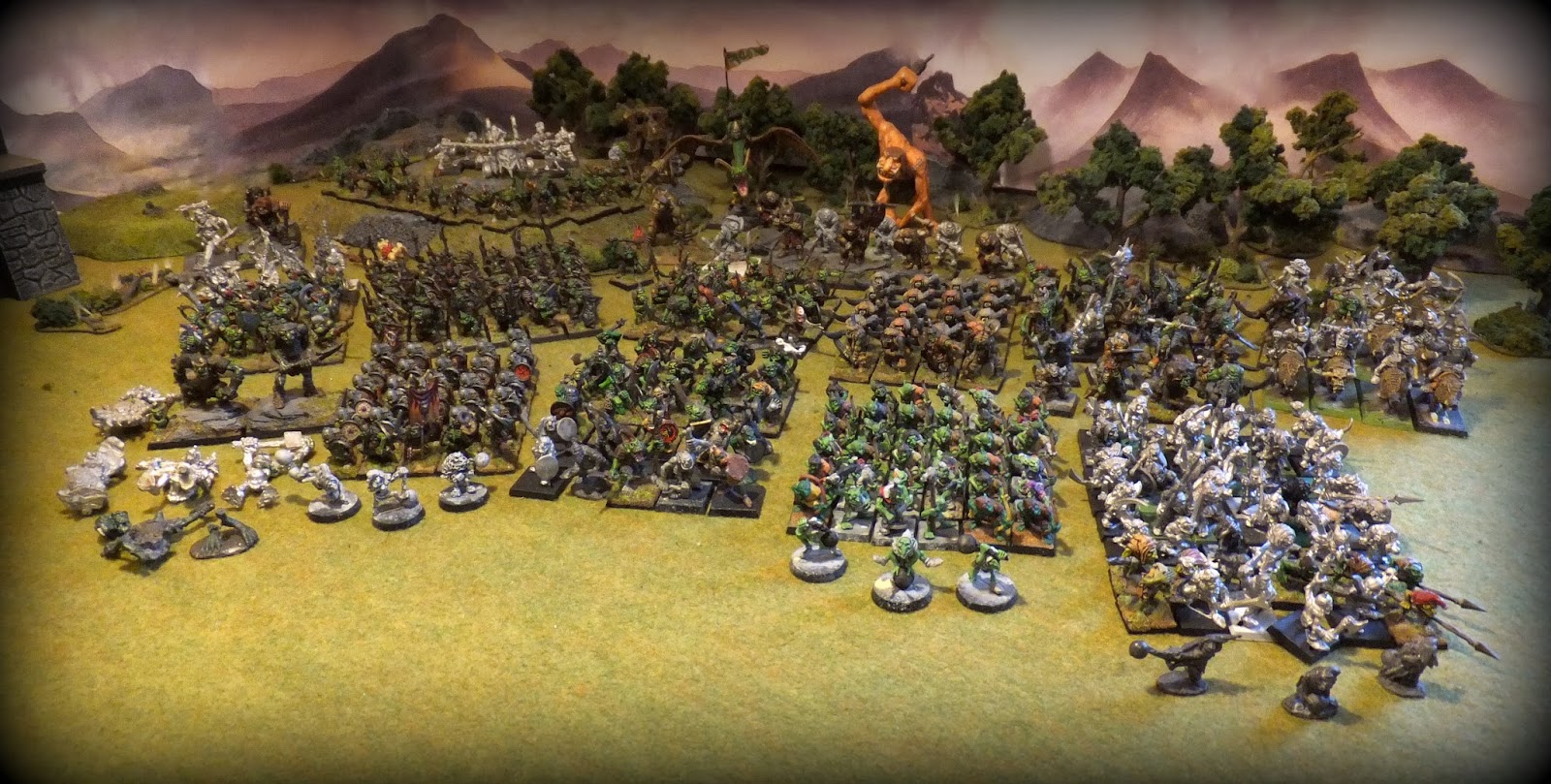