So - another unit done for Orc's Drift!

These five Skarloc's archers complete the garrison of Wodd Elves who guard the Kachas Pass in the name of the Grand League in the first scenario of the game. 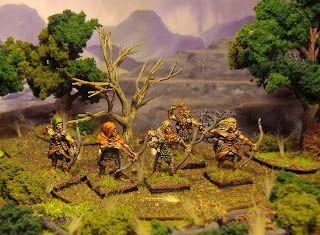 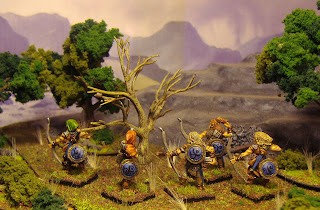 And the obligatory group shot - and a little confession... which includes a bit of a spoiler for the first scenario so look away now if you don't want to know! 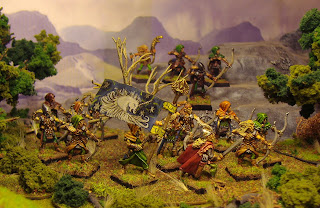 The Elves I have painted up here form the under-strength garrison guarding the pass - Erdolas has sent out a night patrol of 10 Elves and his Lieutenant Hendril Merl( as featured in one of my early games of Skulldred - http://teasgettingcold.blogspot.com/2010/06/road-to-merlinas.html) to investigate reports of an Orc warband in the area. According to the Elves command sheet the patrol is expected back in the morning - Turn 3.
However, the Vile Rune Tribe's command sheet tells a different story - they have met and slaughtered a 10 Elf patrol during the night and so Erdolas' reinforcements will never turn up!
This made me wonder whether or not I should bother painting up another 11 minis that will never get used - and being pushed for time I've decided not at the moment!
What is all the more surprising about this little twist in the tale is that there was a mini sold as Hendril Merl back in the day! I got hold of one a while back - its the same mini featured as the champion for Oreon's Wodd Elf Archers. The other slight problem is that he is a little diminutive compared to the Skarloc's Archers, so until I get round to making a higher base for him, Merl's ill-fated night patrol will probably remain off the table!
Posted by Thantsants at 15:00 No comments:

What's that coming over the hill...

Its only King Fyarr and the Orc tribes of the Northern Wastes off on the warpath!
Apologies by the way for the blurriness in the centre of the pic - couldn't fit this lot into one decent photo so I had to dust off the cd that came with my fairly ancient camera and tinker round with stitching several shots together with the panorama feature - as you can see I'm a bit rusty!
Anyway, certainly feels good to have this little lot done and dusted and as most of them have been sat in the cabinet waiting for the stagglers to catch up I think I'll review the troops once more now I've got 'em out...
King Fy'arr and his Fy'arr Guard (arf, arf!) 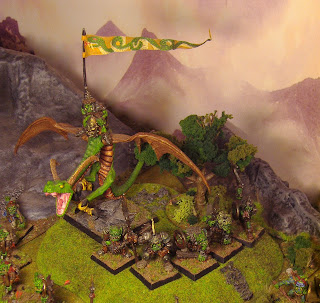 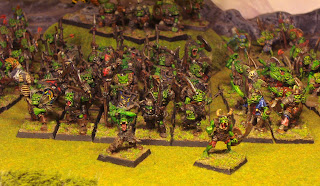 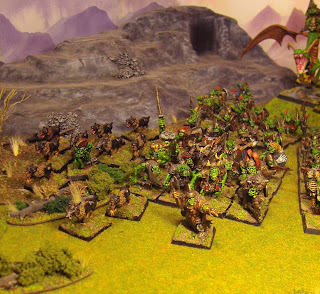 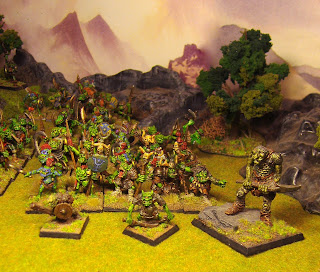 So on with the remainder of the elves - a few of the Wood Elves of Kachass Pass to do and the rest of Brommedir's Bows...
Posted by Thantsants at 15:35 8 comments:

Finally got rune to finishing them off...

So that's it! All the Orcs are done now I've finished the last few members of the Vile Rune Tribe off. Its been an enjoyable - if fairly unproductive few weeks of holiday but I'm back in the swing of things now! 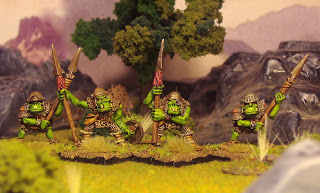 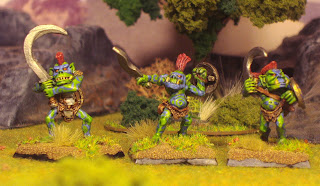 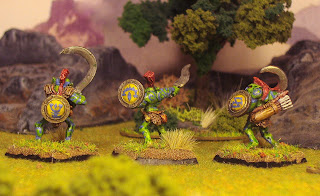 ... and the command group - some of fave Orc minis here! 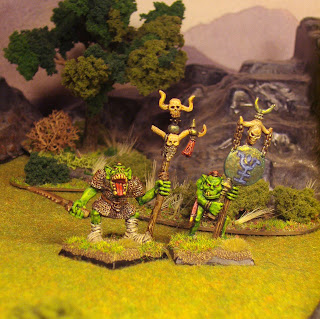 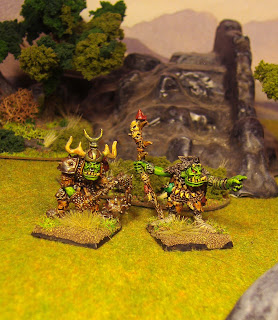 Now for the big group shot of the three tribes together...﻿
Posted by Thantsants at 15:17 3 comments: