Time for a long overdue update on the progress of Shreevan Zeegal's merciless assault on Harrison's Ford. Can Beulenegger and his Griffin escape the Giant's clutches? Will Norress live up to his terrifying reputation?

Beulenegger fought to control his stricken mount as it reared backwards from the Giants terrible blow. He glanced upwards at the huge creature, growling under his breath,

However, he didn't have time to finish as the tree trunk the brute was using as a weapon swept downwards again. Beulenegger kicked and wrestled with Lavister's reins in a last ditch attempt to escape,

With a final wrench, the wounded Griffin finally got the message and struggled into the air. Beulenegger, not content with retreating, spied the struggle in the river between Noress' Horsemen and the Skeleton cavalry. 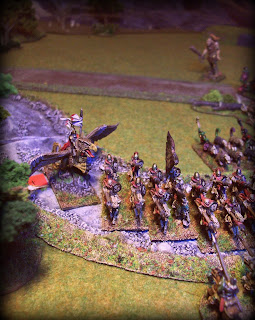 Beulenegger steers his Griffin mount into a banking dive and smashes into the flanks of the Undead Riders. Already maddened by the pain of its injuries, Lavister lashes out with terrible abandon, utterly destroying the skeletal foe. A low moan escapes the survivors of the foul horde as they watch their standard fall into the rushing waters.

Having spent 4 CP's to avoid taking another damage roll on the Griffin, and another CP to move him away from the Giant I thought he may as well use his Impact ability on a softer target - hence the charge on the Skeleton horsemen. A lucky danger roll got me 10" of  movement and an even luckier roll of a 1 for the combat result meant that the skeletons were automatically eliminated!

Meanwhile over on the bluff overlooking the ford, the Handgunners carefully adjusted their sights, measured out their powder and took aim. A deafening roar heralded the hail of shot that ripped into the lead unit of Trolls. As the smoke cleared the evil brutes remained in possession of the river, but several of the creatures nursed great rents in their hides. 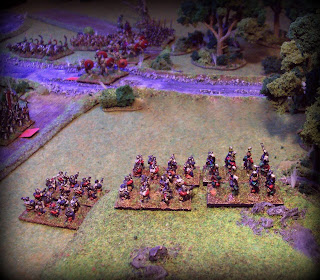 The Handgunners beat the Trolls by 2 in the roll to determine damage from the shooting and so 2 damage points are allotted to the Trolls. They make their damage roll (Still possible to roll 13 or more with the 2 dice what with the exploding 6's) and survive.

The Elvish spears take advantage of the brief lull in the battle to reorganise and rally their ranks.

The air hissed with the passage of the hail of shot as the crash of the Thunderers weapons reverberated across the ford. On came the Trolls unflinching despite the rents torn in their tough hide. Mucklane, the largest and meanest of the bunch paused to bellow out a warcry in defiance as they neared the ford's defenders,

Enraged by the Thunderer's markmanship, the Trolls thunder across the ford. They make their damage roll with ease and roll up 4" for their Danger roll for movement. 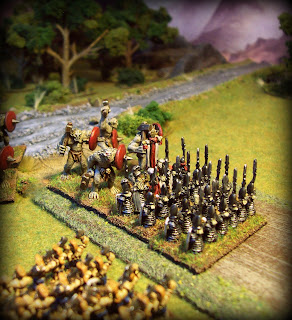 The noble Elves locked shields and braced their spears for the impact but it was a doomed attempt. The Trolls laid about them with their great warhammers making a bloody ruin of the once glittering Elven ranks -  another roll of a natural 1 means the Trolls automatically eliminate their opponents! 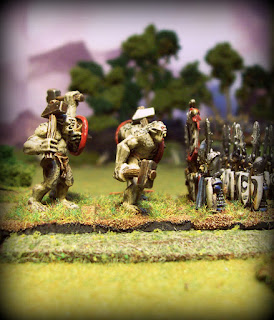 Behind the second unit of Trolls moves up to threaten the Trollslayers. Two danger rolls of 3" and 4" almost brings them alongside their brutish comrades. Further downstream the Skeleton Cavalry remorselessly continue their struggle with the Lancers. Horrified by their implacable foes refusal to die, the Lancers' ranks once more fall into disorder. 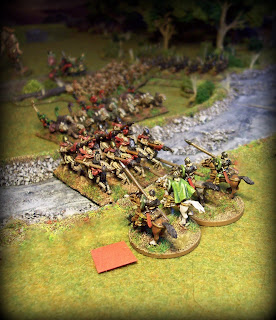 Zeegal gestured lazily towards the various Missile troops who held the hill against him and immediately the unit of Skeleton Archers loosed another volley of black arrows. He let out a contented sigh as the ranks of Human Handgunners rippled in response to the arrows that landed amongst them. Then they wavered and began to retreat out of sight behind the hill they had commanded. Another good use of the Volley ability available to archers - the Handgunners lost the roll by 5 and so are driven back by 5". 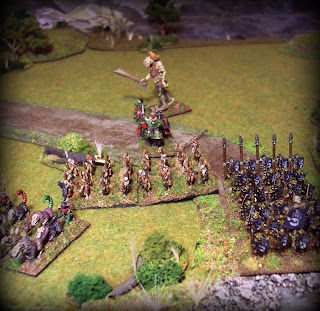 Norres looked on with displeasure at the inconclusive melee that ground on between his Lancers and their Undead enemy. This was not how the path to Chunkukdo and martial perfection should be achieved. He bellowed a command to the Horsemen floundering in the water...

The Lancers, on hearing their great leader, pulled themselves together and rallied as one. With the precision of the drill square they broke away from their opponents and fell back. Almost simultaneously, the second unit of Lancers, primed and ready, charged into the gap created. Once more lances crashed against shield and this time it was the Undead ranks that fell into disorder. 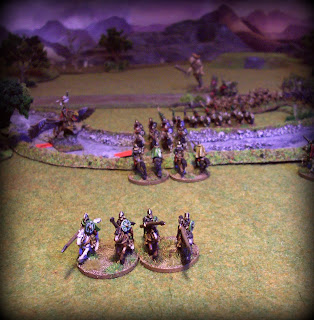 The Trollslayers, gladdened to see their foe ahead of them at last, gave a great cry and clashed their axes together. With a roar they charged at the Trolls in a whirl of tattoos, flaming hair and flashing blades. The Trolls fought back ferociously but such was the strength of the Slayers onslaught that many a brute suffered grievous injuries. The Troll Slayers win the combat by 2 and so the Trolls suffer 2 damage points. They pass their damage roll and ready themselves for the next round next turn. 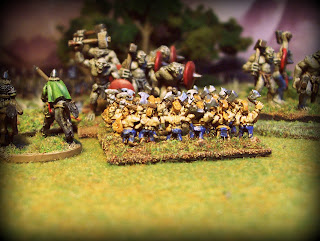 The Thunderers on the hill looked on in dismay as the Elves were dispatched with horrifying ease. Although there was not much love lost between the two races, the Dwarves knew that their loss could cost them dearly. Once more they primed their weapons (I think I managed to forget about paying an extra CP for reloading for these Blackpowder units - I'll have to remember in future turns!) and ranged the Trolls in. Again their aim was true and this time the Trolls fared far worse. With an anguished howl the behemoths finally succumbed to their wounds. This time the Dwarves beat the Trolls by 10 which meant the Trolls received a massive 10 damage points on top of the 2 they had already - 12D6 meant that rolling more than 13 was pretty inevitable! 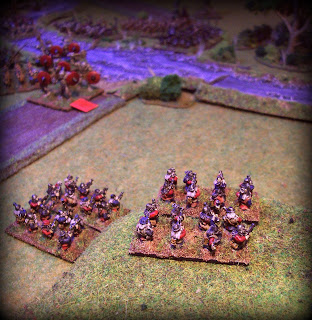 The dread Warlord cursed - with the loss of the Skeleton Cavalry's standard, he felt his command over the army weakening. Added to that his Troll shock troops had been cut to ribbons as they crossed the ford. A change in tactics was required...

The Pack Masters cracked their whips and drove the slavering hounds into the river alongside the Skeleton Horsemen. The sight of the enemy cavalry drove the rabid creatures into a snarling frenzy. To avoid paying through the nose for movement across the difficult terrain of the river (1 CP for movement and 2 CP's for the terrain each!) I opted for a danger roll for each unit at the cost of only 1 CP each - this invloves rolling a D8 for their normal movement, plus two more D8's for the cost of moving across the terrain. The lowest result is then used for the movement rate - both units ended up with a measly 2"!)

Behind them one of the Skeleton archer units moved up to bring the Thunderers on the hill within easier reach of their arrows. 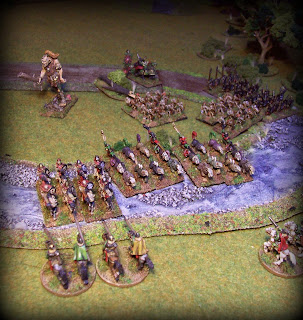 The Giant, frustrated at the flight of its prize, loped forwards once more. Its eyes lit up as it saw the Griffin land in the river ahead. A lucky danger roll of 7" puts the Griffin in danger again! 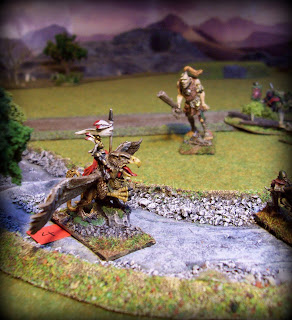 Lashing out with a ferocity born of desperation, the Trolls attempted to get to grips with their diminutive opponents. It was, however, to no avail as the Slayers easily avoided the monsters' clumsy blows and continued to slash at the tendons and sinews of their legs. 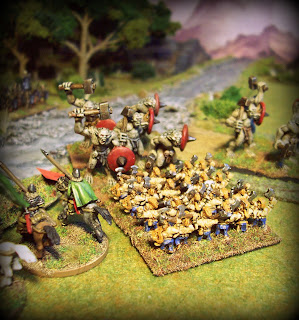 Slowly but surely the Trolls were cut down. The Trolls lose the combat by 3 and so suffer another 3 damage points. Unfortunately for them, trying to roll under 13 on 5D6 proved impossible! 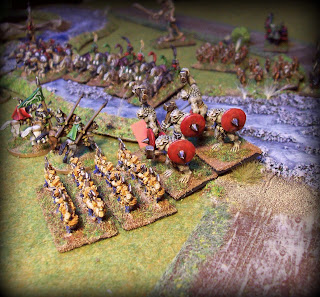 Beulenegger rejoiced at the destruction Lavister had wreaked on the Undead cavalry. Lavister too seemed to have forgotten his injuries.

Beulenegger follows up his successful attack on the Skeleton horsemen by charging the next unit locked in melee with Norres's Lancers. Under the combined assault, the Undead Cavalry once more falls into disorder. Agh - even with all the extra dice for attacking in the flank and having an extra unit support the attack I couldn't get a 1! Ah well - the luck had to run out sometime. 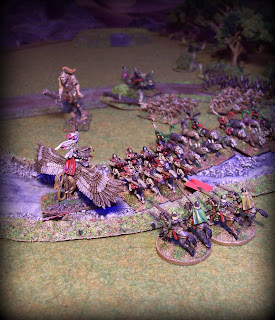 Von Damne breathed a sigh of relief. The first wave had been dealt with and some of the more formidable foes ranged against them had been dispatched. But at what cost - The Elf spearmen had been fine troops indeed and he hoped their loss would not have serious consequences later. Seeing that the Troll Slayers were in danger of being isolated, he gave the order to march.

The two units of Halberdiers separate and begin to fill the gaps in the defensive line. 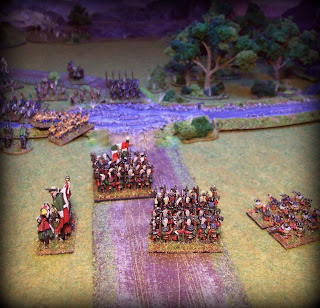 Meanwhile, thirsting for blood and a glorious death, the Troll Slayers wade into the river with the Hounds firmly in their sights. 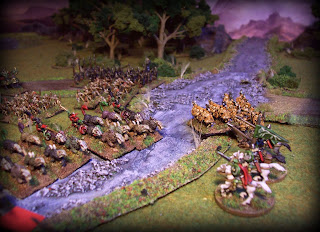 Zeegal sensed that the moment was nearing. The pitiful human defenders' time was nearly up - they were in fact half past dead...

The skeleton archers fire upon the Thuderers on the hill once more. The wind must have been against them as their arrows fell just short. 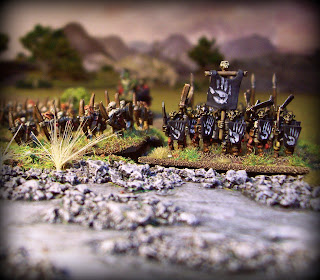 The Giant again strove to catch his prey, crashing forward to bring the Griffin in range of his great club. With a roar of frustration, it realises that the noble beast is still just out of range. A default move and danger roll fail to bring the Giant near enough to engage Beulenegger. 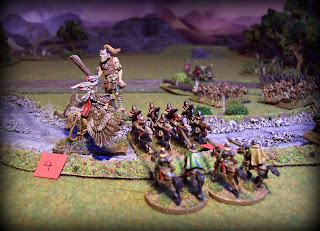 The clamour of the Giant's rage is joined by the baying of the hounds. In a great rush they bound through the water and charge, snapping into combat with the Slayers and Bluch Norres himself!

The Troll Slayers found themselves beset on all sides by the hideous beasts. Hampered by the river's current, they struggle to stave off the ferocious assault and are dragged down and mauled to death. The Hounds are lucky enough to roll a natural 1 - automatically eliminating the Slayers. 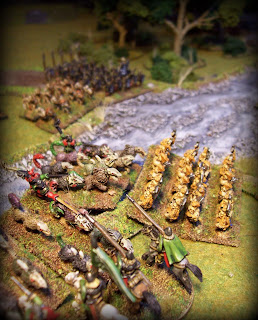 Despite his nerves of steel, Bluch Norres could not help but flinch at the Slayers' demise. Yet he had not much time to dwell on their loss as he and his men were hard pressed themselves. The hounds proved elusive targets and the horses threatened to bolt in panic. Men's death cries soon joined the terrified shrieks of their mounts. Norres, his lance ripped from his hands by the death throes of the beast he had impaled, grimly drew his sword. The last thing he saw as he cried out in defiance were the great jaws of the Pack Leader as it leapt at his throat...

Unbelievably the second unit of hounds also roll a 1 and eliminate Norres' elite Horsemen! They were helped by the fact that the Pack Hunters ability made them a hard counter towards cavalry - this means the dice they use in combat are improved from D12  by two steps to D8. This put them on a par with Norres and they got an extra dice for initiating the melee. 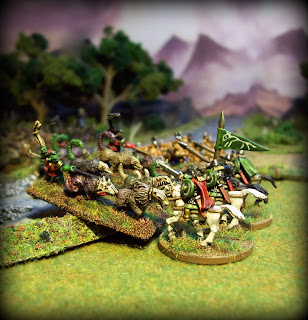 So things are really hotting up - Norres lies dead, Beulenegger's mount is gravely wounded and a massive hole has been torn in Von Damne's defensive line. Zeegal looks like he's about to make a break through across the river, avoiding the ford and the deadly Thunderers defending it.

Can Von Damne plug the gap? Will Zeegal capitalise on his advantage? Can I find any more cheesy one liners from 80's Action Movies to shoe horn into the narrative...