An empty stream, a great silence, an impenetrable forest.

I'm glad I mentioned Josep Conrad's Heart of Darkness in my last post - its definitely got the brain going again in terms of how I'm going to piece together the narrative strands of the Magnificent Sven's further adventures. Cheers Mouse for those little snippets you shared in your comment by the way! 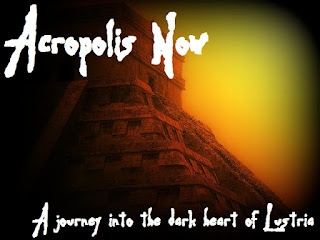 I had thought about originally using Heart of Darkness and by extension Apocalypse Now as a narrative framework from which to hang the various scenarios. The journey down the river in the Volksvagn, Sven's alcohol powered boat, would take the characters from encounter to encounter, culminating in the discovery of the Shrine of Rigg.  However, the source material seems a little dark in comparison to the light hearted tone I usually go for. This shouldn't be a massive problem as I'll be cherry picking various tropes and encounters from the two stories to use in my campaign and twisting them to my own ends.

Having the characters depart on their boat would mean a slight re-write of the first scenario I came up with which sees the victorious Svenn and his companions turfed out of Vastervik, having outstayed their welcome somewhat. With the (initially false) promise of gold and the idea of seeking out the Shrine of Rigg seeded in our hero's mind, I think I've just about covered the Hungry Jungle trope in that scenario! Although I have been thinking along the lines of making the plant life a little more of a presence. Not only in the sense of plants that may physically attack the characters but also the psychological effects the jungle has, as seen in Hearts of Darkness. I need to flesh the idea out a bit more but possibly some kind of roll against WP with a list of nasty psychological effects on a  The horror... the horror table of results should the test be failed. When and how often the test needs to be made will need some thought - after unpleasant encounters with jungle flora/fauna, 25% casualties received, rank and file troops straying too far from their leader's influence? 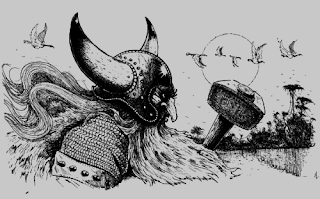 On a more practical note, all of this would also mean I would need to build the Volksvagn and some larger river sections to accommodate its passage! A step too far on top of building the Shrine of Rigg...?!

One way of avoiding the re-write might be having the good folk of Vastervik complete their revenge on Sven and his drunken band by setting the Volksvagn adrift. It could then be discovered by Sven, run aground and in need of repairs and something to distil for fuel later on. Hmm, I have the basis of another scenario methinks! The heroes have to hold out against a Slann/Lizardman/Amazon attack while Sven and Juggo attempt to make the necessary repairs to escape.

I may save the hunt for Mangoes or a similar fruit (say the extremely sugary and potent Cabardi fruit!) to be distilled into alcohol for the boat's fuel tanks for another scenario. I wonder what I might call it...

Other ideas would be to include a Kurtz type character for Sven to bump into. Perhaps a Norseman gone mad, who's set himself up as the God King of a tribe of Pygmies (the only Lustrian race I haven't included so far). I have this chap in the lead pile who might be good in the role -

I also need to shoe horn the Bollrbrjótr in somewhere and somehow - perhaps as the owners of the big cats that disrupt the search for Cabardi fruit.

I can't remember whether I've shared details of the final showdown on this blog or not. At the risk of repeating myself here they are again.

Sven and his band finally navigate their way to Lake Lokka and find the Shrine of Rigg on its shore. They enter and search for gold, whilst avoiding the Koka Kalim guards. Meanwhile outside Gurgyll Greenwake arrives with his Slann rengades and Lizardman levies, hot in pursuit of Sven and thirsting for revenge for the humiliation he suffered at Vastrervik. Of course the Amazons are not happy at the presence of Slann at their most holy of sites and seek to fight them off. I may even have a Bretonnian expedition turn up in search of that most exquisite of delicacies - frogs' legs!

That should be enough action in and around the Shrine to keep a few players very busy indeed.

Final thought - here's a great excerpt from Heart of Darkness describing Kurtz' native mistress, who seems to hold some kind of power over him. It'd make a great description for the Amazons of Lustria too I think. 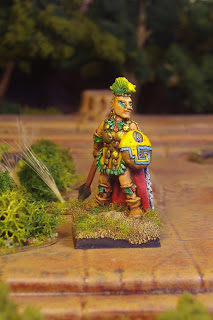 And from right to left along the lighted shore moved a wild and gorgeous apparition of a woman. She walked with measured steps, draped in striped and fringed cloths, treading the earth proudly, with a slight jingle and flash of barbarous ornaments. She carried her head high; her hair was done in the shape of a helmet; she had brass leggings to the knee, brass wire gauntlets to the elbow, a crimson spot on her tawny cheek, innumerable necklaces of glass beads on her neck; bizarre things, charms, gifts of witchmen, that hung about her, glittered and trembled at every step. She must have had the value of several elephant tusks upon her. She was savage and superb, wild-eyed and magnificent; there was something ominous and stately in her deliberate progress. And in the hush that had fallen suddenly upon the whole sorrowful land, the immense wilderness, the colossal body of the fecund and mysterious life seemed to look at her, pensive, as though it had been looking at the image of its own tenebrous and passionate soul.