Sects and Thugs and Bosch and Troll

Apologies for the terrible pun in the title - it's not even entirely accurate as there's no Bosch I'm afraid... 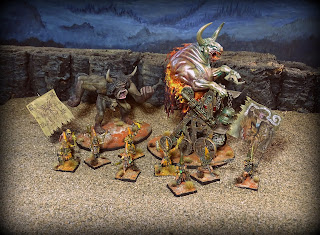 Bit of an update for the Cult of the New Colossus in the form of some minis that I never got round to painting for the Old World Army Challenge. I confess I got a bit carried away buying new stuff while the challenge was running! I've been meaning to post these for a while now as they were painted up for the big game the Cult was involved in at BOYL 2021 - hmm, need to post pics up of that at some point too. Anyhow, seeing as how this is the last day of my isolation period having contracted Covid a couple of weeks back and I'm now on the route to recovery having been laid pretty low by it, I figured it was about time I got on with it. 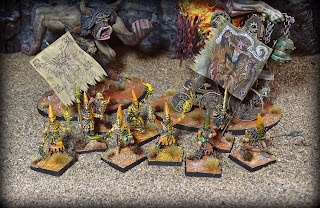 These handsome chaps are from Gripping Beast's Saga: Age of Magic range and I highly recommend them! In fact I've ended up getting hold of pretty much the whole of the Order Militant now - the rest of them will be making an appearance in the Witchfinder General inspired Empire Army I have planned for this year's OWAC... 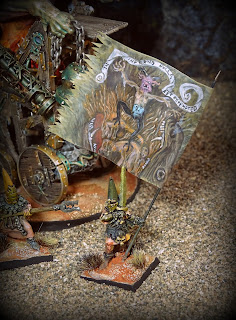 This banner was the main reason for not including them in OWAC 2020 and their tardy appearance on this blog. I wanted to give them something suitably infernal but didn't want to rush it. It's based on one of the panels from Hans Memling's Earthly Vanity and Divine Salvation, painted in the 1480's. The inscription reads, In Hell there is no redemption. 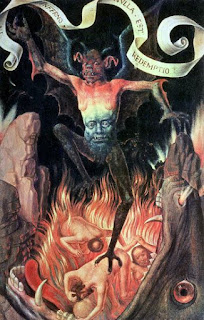 Another addition to the Cult I'd hoped to include during the challenge was this brute, who was supposed to provide the motive power behind the animate statue, Demon engine thing I decided to christen Moloch! He was a lot of fun to paint - less fun to build as I've never really got on with resin models, especially cleaning them up. He's from Scotia Grendel and usually goes by the name of the Eye of Gorath when he's fulfilling his original role as the physical manifestation of the Orc God, Gorath in the Leviathan game setting. 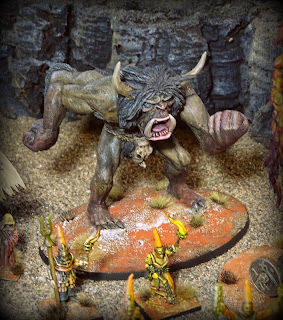 A quicker job on this banner - I went for a faded, wood cut style for simplicity. The cultist was painted for the 2020 OWAC but again, time got the better of me and the banner didn't get done in time! 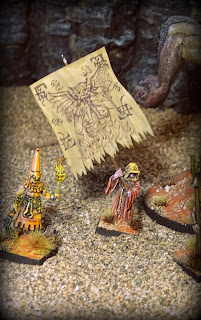 The image is taken from a woodcut from Dante's inferno and shows Judas Iscariot being devoured by Lucifer. I threw in some runes lifted from artwork of pages from the Necromicon just to make extra sure that it was blasphemous enough! 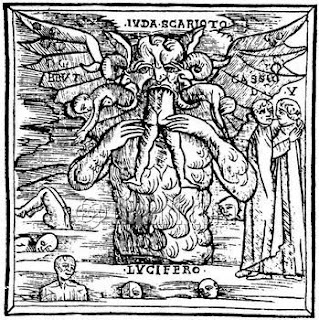 I've still got a couple of small boxes of Cult stuff to finish off although it may be a while now as preparations are well under way for my entry for this year's Old World Army Challenge. Fear ye not, however, as it's a project I intend to keep alive. Doesn't help seeing new shiny Cultist miniatures all the time either! 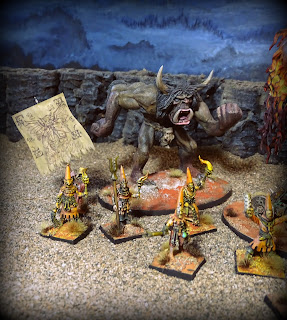