Kurtz drew his foot languidly through the ash that blanketed the ground. Absent-mindedly he toyed with an old finger bone that lay in the dust with the worn toe of his boot. The scene before him was a familiar one - men, women, others - sat huddled together in small groups or alone, cloaks wrapped tight against the keening wind as the brackish waters of the river rolled sluggishly by. Yesterday they had marched and fought and waited and they would do it all again today. 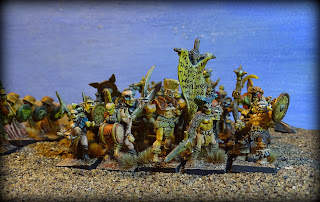 He suspected the same emptiness haunted his brothers and sisters. The dry whispers of their voices contrasted starkly with the maniacal chanting of the Redemptionists camped near by. Fellow devotees of the New Colossus they all were and yet so different. Kurtz wondered what drove the monks, what gave them their unshakeable faith in the redeeming power of sacrifice and pain. The shadow of a wry smile flitted across his face as he remembered once possessing a similar vitality. 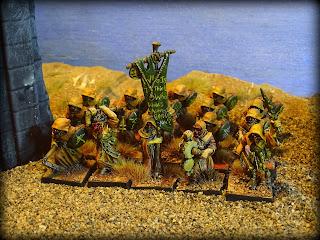 That, however, had been what seemed like aeons ago and the memory died like voices singing faintly on the wind. Long ago he had made a friend of horror. Not the horror of blood and slaughter that the Disciples of the Red Redemption so revered. Kurtz’ horror was far more pervasive and terrible, for he had looked upon all life had to offer and seen naught but shadow and lies. This one truth and the moral terror it brought in its wake echoed loudly within him, for he was hollow to the core. Somewhere a drum began to beat. It was time to move on once more.

Before I continue I feel I should apologise for the butchery in my little narrative preamble of T. S. Eliot and Josef Conrad's masterworks - The Wasteland and Heart of Darkness respectively! As I described in my OWAC introduction post, this army has some heavy literary influences and it's that pervasive feeling of nihilism and entropy, that's inherent in these texts, that I'm  trying to capture both in the background and in my painting. 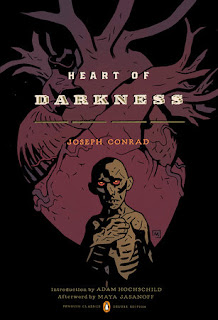 My Mum was an English Literature and Drama Studies teacher so our house always resembled something of a library and it was no surprise I ended up studying English Lit. at university too. I can't remember exactly when I came in to contact with Eliot and Conrad and others of their ilk but it would have been some time during my angsty teenage years! 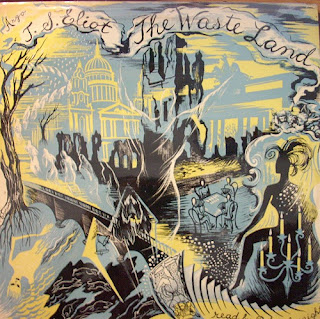 At any rate they struck a chord and although my reading habits are less highbrow and far more escapist now (Sprague De Camp's Conan, Fighting Fantasy and whatever old pulp Sci Fi/Fantasy novels I can find down the charity shop!) they have stayed with me over the years. They certainly seem more relevant now than ever before and, whilst I've never really connected the themes and ideas in them with Fantasy - Warhammer or otherwise, for some reason I can't think why, I was driven to create this Chaos Cult blindly following their demagogue leaders ... 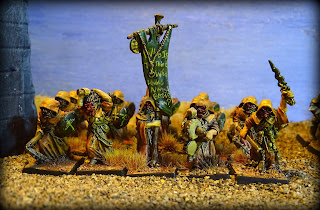 Although Eliot asserts that "April is the cruellest month" in The Wasteland, I'd argue that January is - even if the target of painting almost fifty miniatures in a month for the Old World Army Challenge was self inflicted! So where best to start other than with the hooded masses and besides, the Disciples of the Red Redemption have been on my to do list for a long time now. Coming up with colour schemes doesn’t always come easily to me and I knew I wanted to do something a little different to the original description of the monks of the Red Redemption. It was the following lines from The Wasteland that got me fired up to paint them in the first place (and inspired the cracked earth basing too - more on that in a later post) so I figured I’d look for some colour references in the poem too.

“Who are those hooded hordes swarming 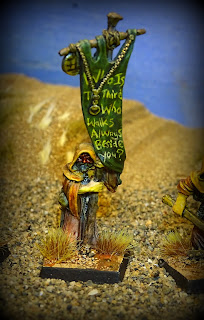 I’d already pinched the line about “the third who walks always beside you” for their banner and the description of this mysterious walker - “Gliding wrapt in a brown mantle, hooded” seemed suitably creepy. So brown leather hoods it was and I decided on a washed out red for the robes rather than the official black to stop them becoming to dark and dull. In the end I think I got a bit carried away with trying for a bounce light effect with the airbrush and the yellow ink sprayed from below to suggest the flickering fires of whatever homestead or village they have just razed seems to have taken over in the photos I took - they are a bit redder in real life! 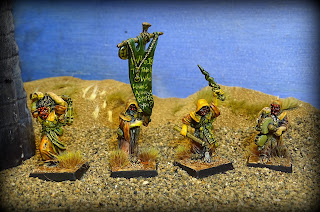 According to their background, the monks’ initiation involves the skin being flayed from their faces and a red hot iron mask being fused in to their flesh. I always enjoy splashing the old Tamiya red around to create blood effects so decided to go with that rather than a metal effect. Perhaps anointing themselves with blood is a pre-battle ritual the monks enjoy or maybe their facial wounds never properly heal - either way, I liked the effect! 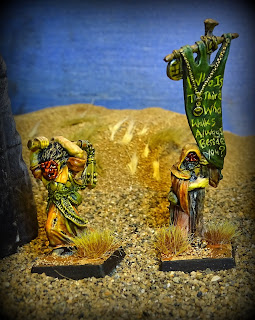 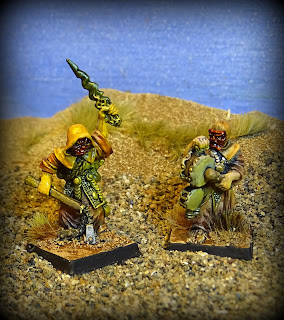 The last detail that took some thought were the shields of the troopers and I couldn't forget good old H. P. Lovecraft amongst all the other pompous literary references floating about in this post! A quick google search for Lovecraftian runes proved fruitful and I threw in a few other occult symbols for good measure as well as some lines from The Wasteland itself. 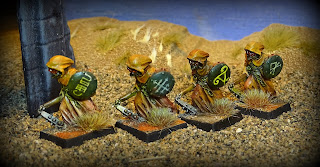 On to the Chaos Thugs and I really enjoyed painting these guys and girls! 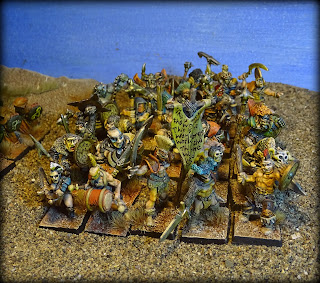 There is such a profusion of shapes, sizes, sexes, mutations, equipment that you're really painting a unit full of individuals. They are a lot of fun and reminded quite a bit of the old Muscle Men collection I had as a kid!

I always like naming my units and their champions and Mr Kutz from Conrad’s Heart of Darkness was an obvious choice. With Mr Kurtz’s being name-dropped in T. S. Eliot's The Hollow Men, I also had a fitting name for the unit of Chaos Thugs he leads. To seal the deal I just had to quote the poem on their banner as well!

Given that the models are so individualistic, I did want something to vaguely tie them together, whilst still allowing their colour scheme to be a little more defuse than the uniformity of the Redemptionists. Having treated myself to one of Achilleos’ art books, Sirens, recently, I grew rather fond of his use of deep yellow ochres and dark blues. The book is lovely and I'd highly recommend it both as a reference for painting and just to enjoy his fabulous artwork.

I’ve tried to include dark blues and yellows here and there as spot colours across the unit to create a little coherence although it's not that noticeable! I also rather liked the variety of war paint and crazy make up he gives many of his female subjects so I chucked that in as a bit of a unifying theme as well. Gives the Thugs a bit of a Mad Max feel too I think! 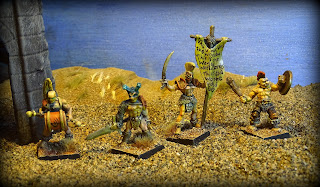 The command group includes a drummer and standard bearer from the Thousand Tribes range from Foundry - very handy for Chaos Thugs and with a good selection of mounted options too! 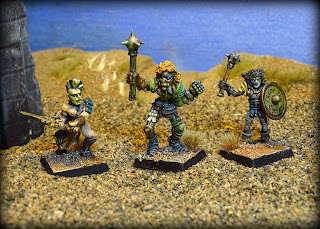 I forgot to take a more detailed picture of the lovely lady in the middle - you may just be able to make out she is wearing suspenders on her right leg with a nice little bow for detail. The view from behind is slightly more revealing and hilarious - talk about impractical female armour! I decided to give the mask she's wearing a feline feel to it as she seems to be a bit of a cougar. The other two ladies colour schemes were heavily influenced by Achilleos' art work.

Another non Citadel mini has snuck in - the big guy is a barbarian champion from Scotia Grendel and fits in nicely as a big brute - the variety of builds, sizes and heights is really pleasing when they're all ranked up. The armoured chap on the left is one of the few surviving Chaos miniatures from my original childhood collection. He survived the great sell off that enabled me to afford the miniatures for the Orc's Drift project I embarked on some years ago. I still miss my Nurgle Palanquin and Chaos chariot...

I was scratching my head a bit for shield designs until I settled on excerpts from Eliot's poem, The Hollow Men, after which the unit is named. I must admit I cheated a bit and used a brown 005 micron pen! When I painted on some matt varnish I got a rather pleasing bleeding effect on the writing - either I hadn't waited long enough for the ink to dry or it isn't as waterproof as is claimed. A happy accident this time in any case! 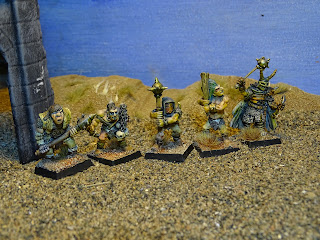 Another non citadel mini - the chap with the mace on the right is from Black Tree design and is the champion from the Zombies of the Sweltering Swamps. He seemed more Chaos Warrior than zombie to me so he got left out of the zombie horde of Soulless Ones in Zharradan Marr's army. Lucky for him there was a spot in this Thug regiment instead. The big guy on the left is another favourite of mine. He's a preslotta mini and I assume he's Citadel, although I've never seen him before anywhere and he appeared in a pre-slotta lot I bought off ebay ages ago - anyone know which range he's from? 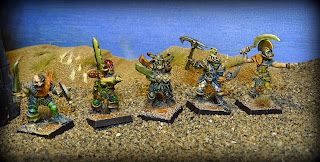 The final group contains Ogbash Facesplitter - one of the White Dwarf Personalities set and also a parody of Tony Ackland I've been led to believe! The chap on the far right of the picture is another Thousand Tribes miniature who fits in quite nicely. The other ones I have are all female and are waiting patiently to join the ranks of my Amazon army when I get back round to it!

So there we have it - one month down and a satisfying number of miniatures painted. Lockdown and furlough does have its advantages! It's nice to be painting again and posting on here and all being well the Old World Army Challenge should keep me busy and provide lots more painted stuff to share with you for the next five months. What can you expect for February's entry? I may continue bashing through the big infantry units, although the Chaos warriors, mounted and on foot are looking rather tempting too...