Day of the Doctor

I finally caught up with some of the 50th Anniversary Dr Who shows that were on a while back -  I missed the actual day of televisual celebrations as I had retreated from civilisation for a very pleasant Birthday weekend in the Lakes.

Anyhow, very much enjoyed the Day of the Doctor - especially Tom Baker's appearance. Nice to see the Zygons back again, although I reckon they were a little overshadowed by the events on Gallifrey. They definitely deserve their own episode at some point.

All this Who goodness inspired me to dig out my old Blacktree minis and take some fresh photos - that and a great email from fellow Oldhammerer, Lenihan inviting me to join in a Dalek Civil War game as soon as his Black Tree Design order arrives. He's assembled a mighty Imperial Dalek force so I've reinforced my existing Genesis/Renegade force and look forward to a bit of Invasion Earth action in the New Year. Oh I should mention Warlord Paul is waiting in the wings to take command of a U.N.I.T. Taskforce to try and dissuade the Dalek menace from obliterating Earth in their little spat!

Enough jibber jabber - here's some new pics of my whole Dr Who collection. 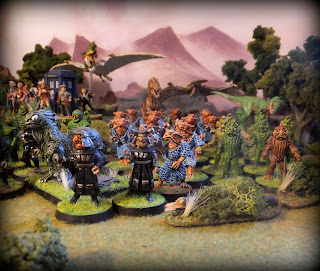 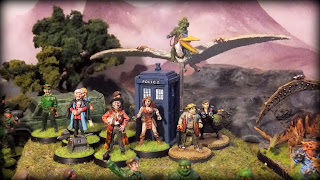 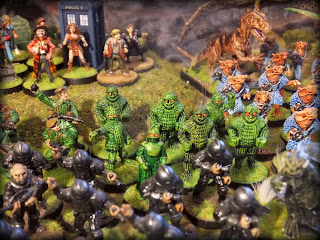 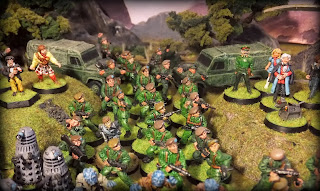 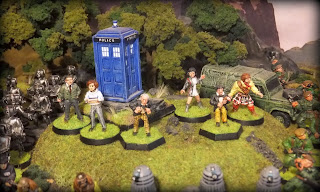 Good old Bill Hartnell as the 1st Doctor, along with Barbara and Ian. Damn - just realised I forgot to order Susan while she was half price yesterday! 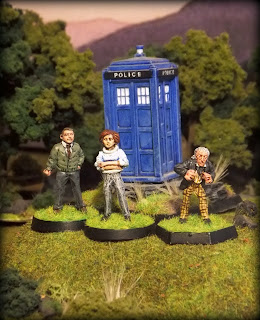 Patrick Troughton as the 2nd Doctor with Zoe and Jamie. 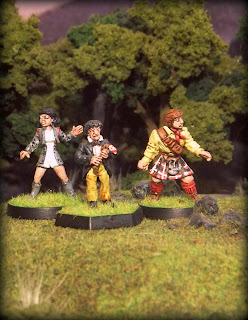 The Brig, flanked by Captain Yates and Sergeant Benton plus two squads of U.N.I.T.'s finest, including a Heavy Waepons squad and two Landies. 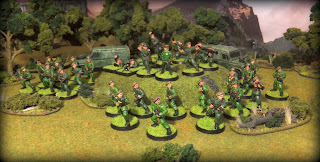 Yates taking charge of the Bren team, while the Mortar lays down covering fire. 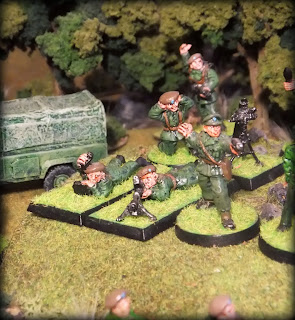 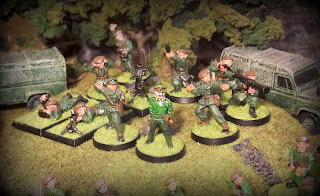 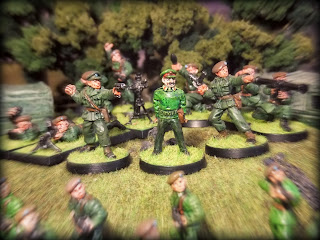 Warriors of the Glorious Sontaran Empire hot on the heels of one of their sworn enemies - the Rutan! 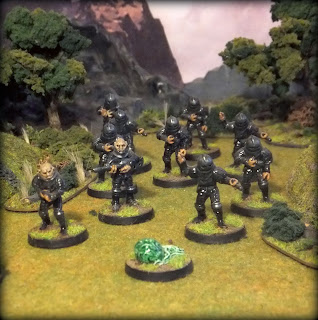 I had, and still have, vague plans for a WW2 scenario involving the Sontarans hunting for an escaped Rutan prisoner. The only complication being that the Rutan has fled to the Eastern Front and taken the form of one of the Russian soldiers - just before a big push by the opposing German Fallshirmjaeger units! 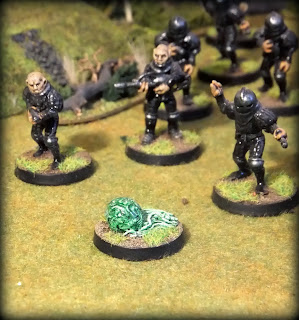 The Ice Warriors - they'll be getting reinforcements in the form of the Ice Warrior collection set - be nice to have a few more poses, especially as the Citadel chaps are a bit on the small side. Always been a favourite of mine - unfortunate placing of a burning torch in this clip though! 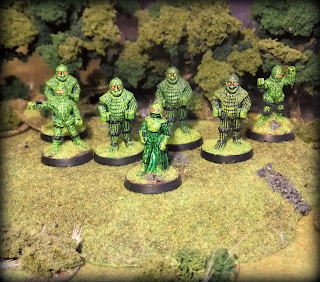 John Pertwee as the 3rd Doctor with the lovely Jo Grant and Sarah Jane Smith. Liz Shaw should also be joining him soon... 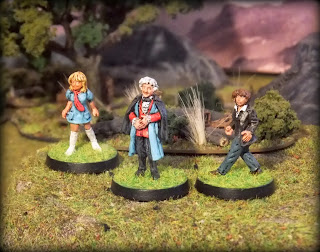 The inimitable Tom Baker as the 4th Doctor with Leela and K9. Oh and his bag of Jelly Babies! 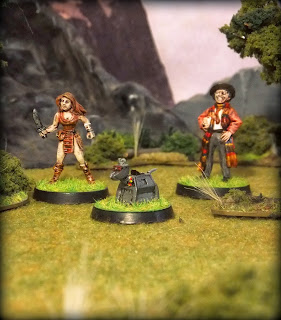 The Doctor I grew up with - Sylvester McCoy and Ace with another incarnation of the Tardis - unbased this time so it can feel as home on a space ship as disused quarry! 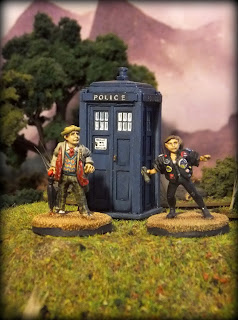 The Silurians and Sea Devils with assorted Prehistoric friends. I wrote a series of scenarios as part of a Silurian campaign ages ago - Vengeance from Below - must get round to playing it some day... 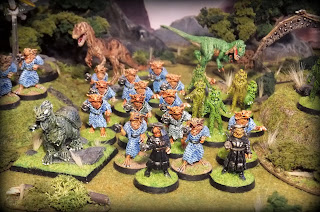 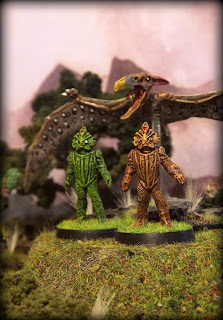 A NanoTyrannus from Copplestone I think. Bit more convincing than this fellow! 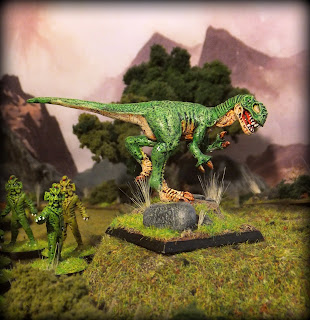 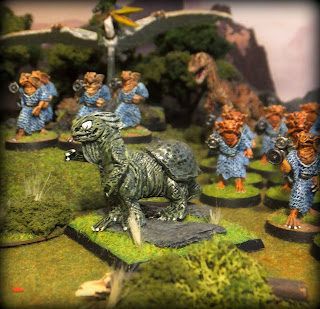 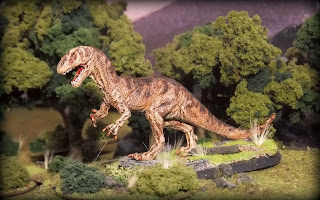 Quite proud of this guy - I love the Virgin Dr Who novel Blood Heat, and had to have a go at filling out the Silurian forces with some of the ideas from the book - hence Silurian Pterosaur riders. 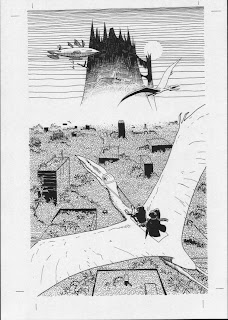 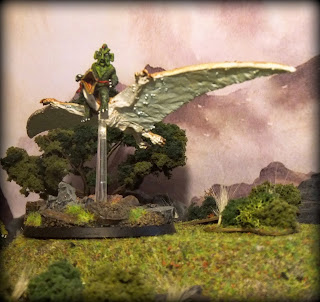 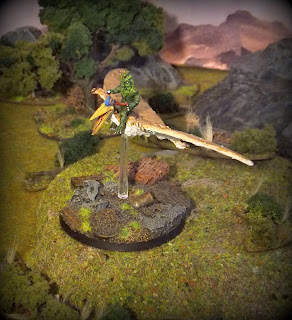 Might have to have a go at this fellow from the novel's front cover... 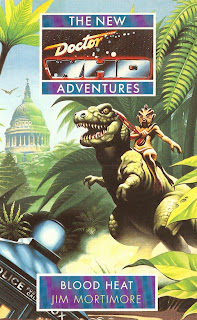 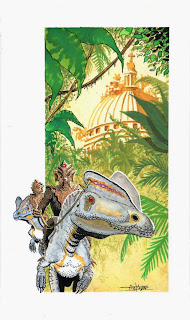