We deal in lead friend...

So says Steve McQueen's character, Vin, in the Magnificent Seven, and so friends we deal in lead here too with another of my LPL entries - The Magnificent Sven! 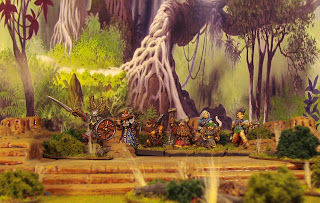 Approached by a desperate old man as he sits drinking in the Packet Inn, in the Lustrian Norse settlement of Iquitos, Sven agrees to set out with what recruits he can find on board his boat to free the town of Vastervik from the cruel yoke of a large rengade Slann warband, under the leadership of the jungle desperado, Gurggl Greenwake. 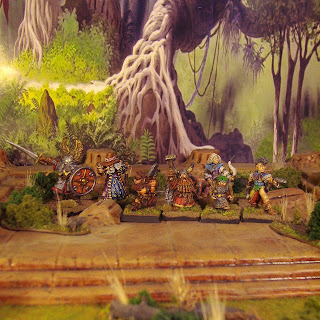 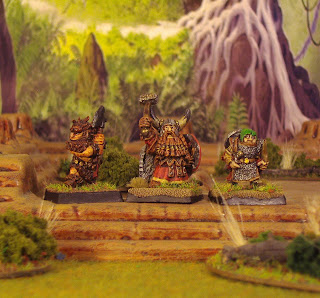 Sven was once a member of the Engineers Guild but was expelled for his outrageous ideas of alcohol vapour powered boats (Dwarfs distrust rivers, the sea and anything to do with them). Having emigrated to Lustria to escape the mockery of his fellow Dwarfs, following the humiliation of the "Trouser Legs" ceremony at the hands of the Guild, Sven made his dream reality by building his alcohol powered paddle boat. He named it the Voltsvagn after his Mother and made a fortune operating it as a ferry for the various Norse settlements that had sprung up along the banks of the great Amoco river. Now almost respectable he has become bored and itches for a new adventure.

Juggo "Senseless" Jorikonn, a Norse Dwarf Berserker, is so named for the year and a half long drinking binge he went on having returned as the sole survivor of an ill-fated raid on the Slann Empire. As the once substantial hoard of Slann gold he floated back down the river with has now long since gone, he has been working aboard the Voltsvagn for Sven.

Raidocks Timmowit ran away from home in search of fame and fortune in the fabled jungles of Lustria. In fact all he found was that a fool and his money, most of his belongings and even his clothes (which were far too small to fit anyone anyway!) are easily parted through a combination of gambling, theft and carelessness! He has been washing dishes at the Packet Inn at Iquitos (claiming to be a catering manager in his letters home) until he sees his opportunity to change his fortunes by stowing away on Sven's ship. 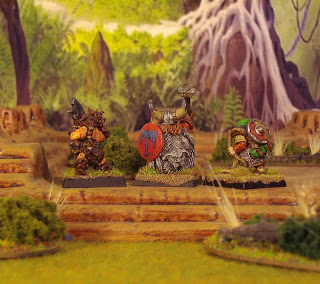 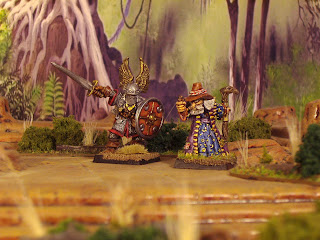 Karl Ustracutter (not the original mini - and I didn't really want to cut one his legs off!) is one of the many Norse adventurers who have come to plunder the rich Slann Empire. He had thought his adventuring days were over after his last disastrous escapade, searching for a fantastical Pygmy temple, deep in the jungle. His raiding party was ambushed by no less than a confederation of six Pygmy tribes. Having been captured, he was forced to look on as the remnants of his hearty band were taken one by one to become hearty meals... Eventually after many escape attempts his turn came. However, by then the Pygmy chief had come to rather like him, impressed as he was by Ustracutter's pluck and refusal to grovel. Early in the morning he was taken out and clubbed - coming round later that night he found himself the guest of honour in a feast celebrating his release. Still drowsy he accepted a mug of beer and a chunk of meat from a suspiciously long joint, but curious as to the source of the dull ache in his left leg and an apparent inability to move the limb, he looked under the table - and passed out again when he saw it had gone! Recruited by Sven, Ustracutter is sure there is at least one adventure left in him...

Aygar Mistletaine is the oldest Lustrian born Norseman alive on the continent. His adventuring career had apparently come to an end twenty years ago - when he was fifty. Trapped in a tiny catacomb for two years by a Slann trap, he kept himself alive by collecting water drips and using a "pull a fish from hat" spell, taught to him by an Iquitos fishmonger. Unable to free himself he managed to alert another Norse raiding party with his knocking. After giving his rescuers half his fortune, he became a recluse, advancing his studies of magic - some say his mind and nerves snapped because of his ordeal - Sven can't afford to be choosy with the slim pickings available in Iquitos for his expedition... 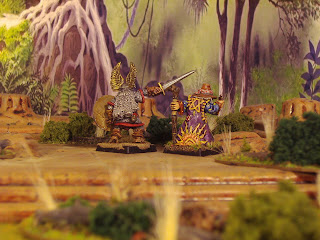 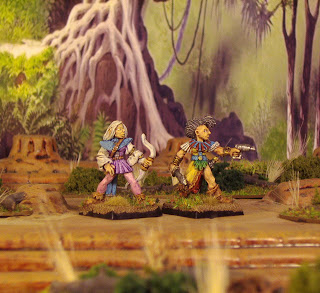 Riolta makes her living as a professional tournament archer, holding the titles of many of the Elf Kingdom's most prestigious contests. Like many other successful "pros" she is alarmingly rich. She is currently holidaying in Lustria and as a female and a Sea Elf she has been allowed to travel freely in Amazonia. Lately she has hired the Voltsvagn for a hunting trip up the river - so far she has bagged several crocodiles, a giant turtle and a brace of Slann. Sven, Juggo and especially Kara were all highly impressed! Sven has even managed to persuade her to go with him on his latest escapade.

Kara is an Amazon whose whole life has been a tale of rebellion, intransigence and laziness. Shipped off to become a sister with the Kalim Devouts at the age of 25, Kara soon came into conflict with her superiors - making her already arduous and exhaustng life more miserable. Eventually she was contacted by an underground subversive Kalimist organisation and recruited into a plot to blow the Amazon Queen up as she visited the venerated Riggs Shrine. However, the plot was uncovered and Kara was forced to flee - after she had stolen a Bolt pistol and several magazines. She wound up in Iquitos but hates it, the Norse and their chauvinistic ways. She has been hired as the guard on Sven's boat. 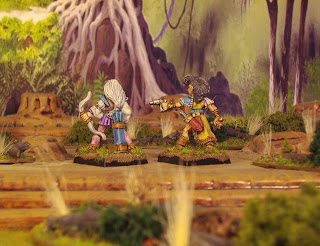 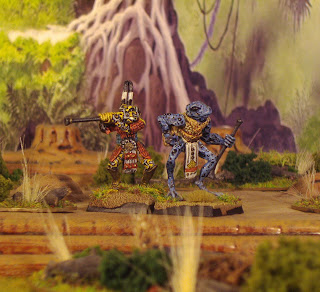 I reckoned these Slann Braves should get Poison Arrow Tree Frog style patterning on their skin - they don't need to go far for the venom for their blowpipe darts! 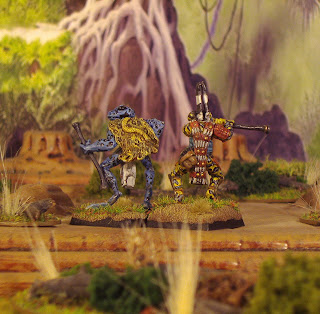 Loads more Slann to come eventually (after Orc's Drift!) including Cold One Riders, Warhounds and handler, a slaver and more warriors...
Posted by Thantsants at 16:04