Thought I'd try my hand at another rules set. This time a solo game of Warhammer Fantasy Battle 3rd edition. I have fond memories of the games I played as a lad and the book has been a constant source of bedtime reading (I know - sad isn't it!) since I got another copy off ebay some time ago. To make it work as a solo game I'm just putting myself into the role of each force on their turn - a little contrived but I'm really just playing this game to refresh my memory of the rules and try out a few things.

First impressions - my fond memories obviously didn't include the many consultations of tables, rules, stats and modifiers that have slowed gameplay down somewhat! Always loved WFB3 for all the minutiae it goes into with special formations, weapon modifiers and the like so I'm enjoying it - just miss the pace of the brilliant skirmish games I've had with the likes of Skulldred and Havoc.
Anyway got one turn played yesterday afternoon!!

With the Goblin Hordes mobilised against the Grand League in the East, under the agreement between King Fyarr and the Goblin King, Murgol, various lesser chieftains saw their chance at some easy pickings. Fingral Crackscratcha was one such opportunist. His columns of orc warriors trailed the seething mass of Hill Goblins swarming towards the defences of Ramalia, peeling away in the night down the mountain pass that led towards Ortar itself - Fingral had no desire to fritter away his strength against the Grand League's army in a pitched battle with only Goblins to cover his flanks.

As dawn sullenly broke, the grey sky glowered over the hamlets and farms that lay on the outskirts of the city. Fingral licked his lips in anticipation of the slaughter. His leering grin froze - something glinted in the pale and watery sunlight. The faint call of horns rose up and tiny points of light moved through the fields as the sun caught shields and breastplates. They formed up into little squares that blocked the highway. It could mean only one thing - Ortar was defended.


Hidden eyes had watched the Orcs from the woods that bordered the mountains and now Man, Dwarf and Elf stood united against the invader.  Cursing with displeasure Fingral jabbed his blade at the thin line of soldiers. The orc columns began to pick their way through the rocks and onto the plain...
The Impasse at Ortar Pass

Orc Turn 1
The lead elements of the Orc column form up - Ruglud's Armoured orcs take the centre with Fingral and his bodyguard. Covering their right flank is Wyva Longface and his boyz, whilst Gronit Dead-eye's archers bring up the left. The shaman, Dravid Coppafeal, leads two drooling trolls on the extreme left and his doltish apprentice, Avva Badded, prances and gibbers between the two orc mobs.

All units advance on the Grand League units defending the highway. 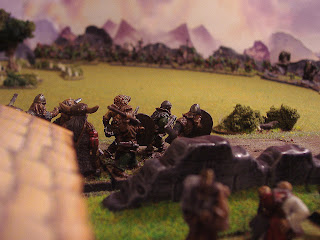 Dwarfs can be tricky to hit as they're quite short. Dwarfs hiding behind a wall with crossbows are even trickier so Dead-eye's archers let loose at the Norse Berserkers gnashing their teeth in front of the farm house. Even so, having just moved up, their aim was off - only one Norseman was hit and wounded by the wild hail of arrows. 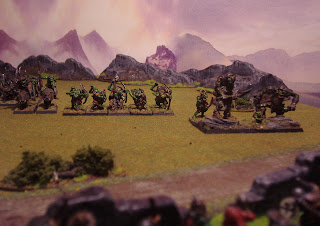 As they hadn't got their hands dirty with any combat yet the orcs continued their relentless advance... 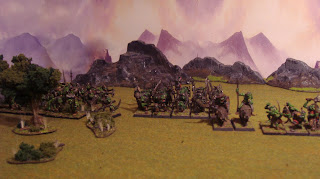 Eager to get the slaughter underway Coppafeel unleashed three deadly bolts of ligtning towards the Bergjaeger (human scouts) cowering behind the wall by the farmhouse wit their bows. Four hits struck home sending three archers convulsing horribly through the air. The fourth mopped his brow, patting the blackened stone wall thankfully that had deflected the bolt.
Grand League Turn 1
Hurriedly Men and Dwarfs rushed to take up positions by the highway to meet the green tide surging down from the crags. In the centre the Dwarf clansmen anchored the line, a small unit of Norse berserkers on their right and the Ortar militia on their left. Two sapper teams watched on ready to begin digging defenses for the brave few to retreat to if needed.

To their right the Wood Elves who had been so useful in tracking the Orc's movements prepared their advance through the wood to fall upon the enemy's right flank. Next to the militia a small troupe of Wardancers stretched and kicked, warming themselves up for the coming struggle. The bear and hounds of the Elven Beastmasters watched on impassively, while a band of gladerunners peered into the distance ranging their foes. The Elven general, Mellthathar Althathar and the sorceress, Paldaniel stood shoulder to shoulder with the great protectors of the wood - Atkrinson the Rowan, a mighty treeman and the mysterious Zoat warrior, Raphellicus. At the end of the line another Beastmaster soothed his impatient feline charges. 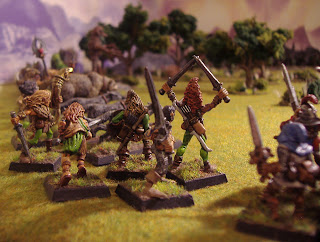 The advance was sounded and the army surged forward - the Elves took to the wood, the Men and Dwarfs stepped off the road ready to meet the Orcs and the archers and crossbowmen licked their wounds behind the wall that ran along the highway. 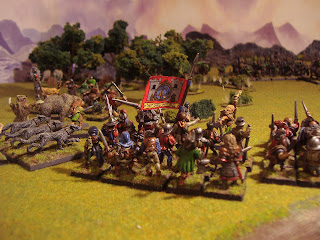 As the trolls began to bear down on the Dwarf crossbowmen they opened fire - 5 bolts hit home causing two wounds. One of the great beasts staggered, almost mortally wounded, until it seemed to recover. The dwarf's cheers faltered as they saw the crossbow bolts pop out of the deep wounds they had inflicted. The troll, having successfully regenerated the damage, continued shambling towards them.

The Bergjaeger also let loose a volley but this time at the Orc archers - three arrows found their mark but failed to cause any damage, the points skittering off rusted mail shirts and tough orc hides!

Meanwhile the first real fighting broke out on the battlefield. As Wyva's orcs stepped nervously into the wood there worst fears were confirmed. Three enraged wildcats pounced on the unfortuate orcs' flank. Seconds later a ripple of fear swept the Orcish ranks as Atkrinson crashed into them. A guttural command from Longface steadied them but their predicament worsened as an enraged Zoat joined the fray. Four Orcs fell to the wildcat's ferocious claws and another was trampled beneath the Zoat's thundering hooves. As if this wasn't enough Atkrinson crushed another three. A rout was narrowly avoided by Wyva's threats and oathes but the Orcs were pushed back out of the wood. 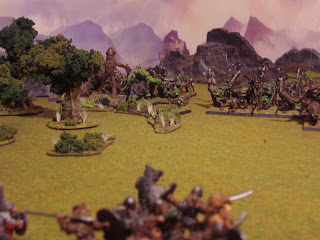 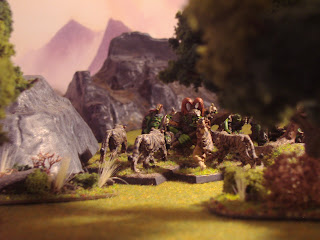 The rest of the Alliance units edged forward, strengthening the line and the various magic users prepared their incantations.

Gaspar the Wise, the dwarf wizard sent a terrible wind against the Orc archers forcing them to the ground - the Alliance line would be safe from their arrows for the moment. The druid, Breward, created a magical bog in front of the trolls blocking their path, happy in the knowledge that his actions would not cause the death of even these foul creatures. Suffering no such scruples, Pennan Tellur, arch-mage of Merlinas, sent forth a trio of magical lightning bolts in response to Coppafeal's magical attack on the archers. One of the trolls was incinerated, its ability to regenerate negated by the flames.


And so ends the opening turn of the game - the Alliance appear to be mounting a strong defense but does Fingral have a few tricks up his sleeve? Can three units of orcs and a couple of trolls really constitute the true fighting strength of his tribe...

Tune in next time for the next gripping instalment!
Posted by Thantsants at 16:08