Chariots of the Gobs

Today I have some models I've been wanting to get to grips with almost since I began this hobby as a spotty little thirteen year old! 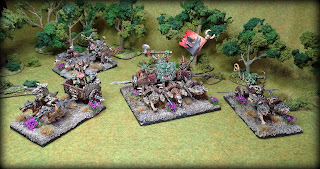 I may have mentioned it on this blog before, or in the comments section or maybe even on Facebook, but I never regularly visited a Games Workshop store when I was a kid. Our nearest would have been Bolton (I think) and definitely Manchester and we didn't often go to either place shopping. However I do recall very occasionally going in to the model shop on or near Deansgate and purchasing Ruglud's Armoured Orcs.

I must have visited on at least one more occasion, as I also bought the Orc War Wyvern (as well as a random blister of Ral Partha Orcs that were reduced) from somewhere and that would be the likely spot. Anyhow, to cut a long story short, I was well and truly suckered in, as I'm sure were many of you dear readers, by those beautiful big boxes that Regiments of Renown and Machineries of Destruction came in. Harboth's Orc Archers didn't make the grade only as I figured Ruglud's would give me crossbowmen and warriors for the price of one regiment. For me the Holy Grail back then were the Goblin War Battle Chariots - and I've still never got hold of the two with the original box! 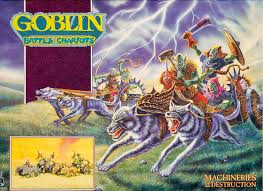 The box art was and still is so enticing to me and I recall wringing my hands at the time over whether to choose the cahriots or the Wyvern with my saved up pocket or Birthday money. The power gamer in me obviously won out and the War Wyvern served me proudly for many years, never growing sick of the taste of Empire cannon crew!

I won one of the chariots on ebay some years ago along with a few others and, despite my fond childhood memories, it's languished in cardboard purgatory since then. Dave's Big Birthday Bash was the motivating factor for me to get on with it as I was required to supply a rather large number of Goblinoids to the horde in order to balance out the Great Empire host ranged against us! The game was so big there would be no way of reporting it in any sensible way but I must get round to putting my pictures up on here at some point. 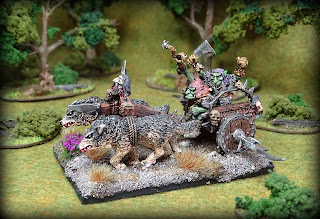 So, with visions of a massed Wolfrider and Chariot cavalry wing sweeping all opposition aside as it rolls up the Empire flank, I figured it was about time to sort my chariots out. Where better to start than with one of the Battle Chariots. 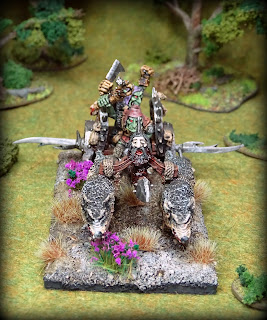 My childhood nostalgia wasn't misplaced and I really love this model. There's a nice simplicity to it and it's fairly believable as far as fantasy war machines go. There's a few nice details like severed heads and the crew are classic Kev Adams gold. You may have noticed the wheel scythes have been somewhat enlarged. Many of the chariots I got cheap of Ebay had bits missing and wheel scythes seem to be the most common in their absence. Best I could do with my bits box were the blades from modern Dark Elf spears. I could have cut them down a bit more I guess but I quite liked them as they are - bugger to pack the chariots away though of course! 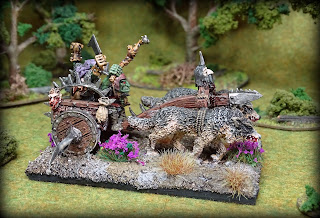 This next monstrosity must be the opposite of the Battle Chariot above! Grom's chariot that came out for 4th ed. was one of various reinforcements I ordered through mail order as the arms race became ever more competitive with my gaming friends moving on to the new edition and leaving dear old 3rd ed. behind. 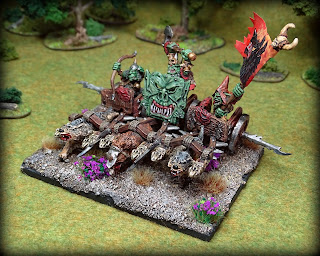 I quite liked Grom and his standard bearer, Niblit but I couldn't abide that daft looking chariot and as for those plastic wolves... I don't recall Grom ever having much of an impact in our games either for some reason, which may have been another reason for my discrimination against his chariot! 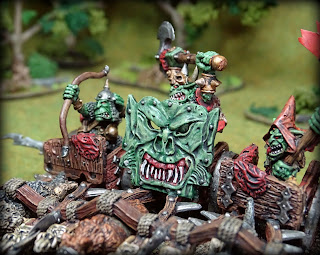 I'd sold his ride off on ebay a long time ago but kept hold of the character models and happily enough I'd somehow ended up with multiples of the Goblin King's Battle Chariot, along with various other bits - you'll have seen in my last few posts that a couple of the drivers have passed their HGV license and now drive Ogre Wagons for my Hobgoblins! 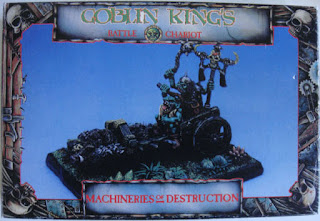 After a lot of fiddling about with the pieces an idea was slowly forming in my head... I could make a 3rd ed. chariot for Grom the Paunch! 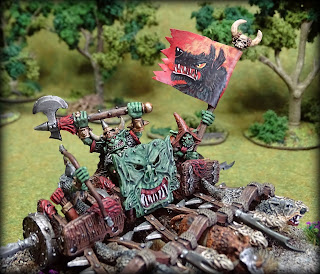 A grand total of three Goblin King chariot chassis have gone to make this beast, along with various spare wheels and sidings. The pavaise shield from the Chaos Dwarf Tenderiser/Whirlwind makes a rather eye-catching focal point for the chariot as well as some protection for Grom! 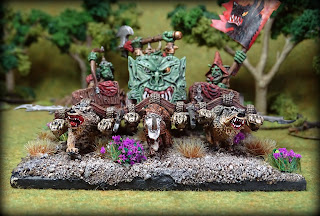 I only had two wolves spare so he got a boar, from the old Fantasy Tribes Goblin Chieftain's Chariot, for a bit of extra grunt... 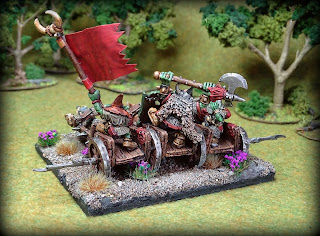 The archer in the right hand side compartment is also one of Kev's but comes from the Blacktree Fantasy range. I got him as part of the Goblin Kickstarter they ran last year(?) and was possibly the promptest delivery I've had from Blacktree yet! The rest of the Gobbo's are great too and will hopefully be joining the horde before the year is out. Lastly, Niblit's standard was nicked from the 3rd ed. Armies book - I forget whether it's a banner or shield design from the Orc and Goblin section but it was a lot of fun to paint - not too cartoony I hope! 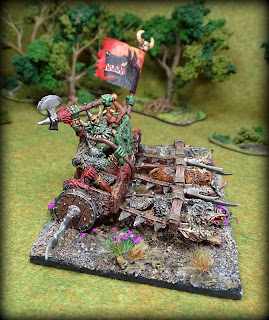 Next up is the Marauder Goblin chariot - another triumph of simplicity and function! 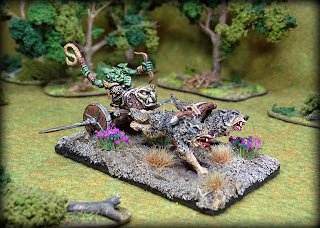 I kept the painting on the chariots pretty plain with a similar simple colour scheme to tie them in as a unit. They can certainly operate loosely as a unit in 4th ed., gaining leadership bonus from the highest ranked crewman - can't remember the chariot rules from 3rd - apart from the fact that they're very long! 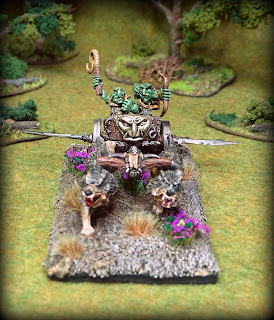 And finally a chariot I did actually own back in the halcyon days of my youth! The old Bob Olley Goblin War Chariot. 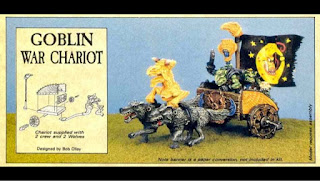 I seem to have lost the banner pole that clips on the back and I had to give the Shaman a peg-leg and sculpt a new foot for one of the wolves as they had both suffered amputations! 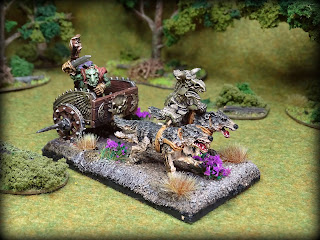 I'm afraid to say that as an ignorant youth I rather neglected this lovely old thing. The wolves looked too dog-like, the Goblins didn't fit in and the whole thing was just a bit odd when lined up with my plastic Fantasy Regiment Orcs and Goblin archers and of course Ruglud and his boys. 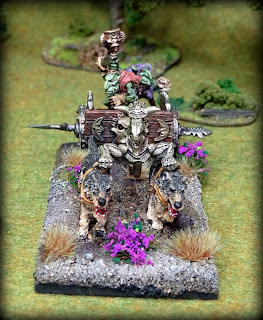 There was a rather half-hearted paint job to paint over so it did at least get some action and my tastes have now matured enough to appreciate all things Olley! Besides - who wouldn't want a Goblin shaman haring about in his own chariot, wreaking all kinds of mischief behind enemy lines! 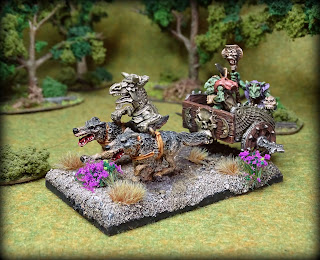 I would have loved to end this post with a brief account of the Green Brigade's valiant and decisive actions at Dave's Birthday Bash. I'm afraid the only sweeping that went on was sweeping them back in the box as they met stiff resistance and withering cannon fire on the flank I set up on. Ah well, best laid plans and all!

Instead I'll end it with the promise of more chariots to come... at some point! I still have the Goblin King's Battle Chariot to put together and the curious story of the Demon Ulrishta that inhabits it to share with you. There's also the Orc chariot from Marauder that I didn't get time to do for the big game and my ongoing hunt for the other Goblin Battle chariot...