As I tend to agree to big games or come up with all kinds of daft and over-ambitious projects, I've often ended up in a mad dash to get things painted up in time for the big day. This has often led to loads of stuff not ending up on the blog so I've been thinking of a way to remedy this. So I'm starting a series of posts where I look back and gather up all the minis I've painted for a particular army. They might not have featured on the blog at all for one reason or another or they have been done over a series of posts but never been gathered together for the big army shot.

As Hobgoblins have been on the menu recently, I'll start with them!
The pictures for this post are a combination of two photo shoots - one with the now finished Dolgan Raiders wagons and one taken earlier without. I'm including both as it's always tricky taking whole army shots and some shots show parts of the army better than others! 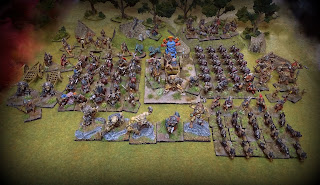 A bit of background first - Third edition was, in my opinion the heyday for Hobgoblins. They inhabited the largest Empire in the Warhammer World, dominating the Northern Steppes, forcing the Human nation of Cathay to tremble behind an enormous magical wall and even penetrating the Old World far to the West and the New World across the frozen North.

The fact that they only had an Allied Contingent list devoted to them in the Armies book was no barrier of course to creating a whole Hobgoblin Warhost!

There were some pretty fun rules back then too:

Hobgoblin forces always carry their army standard in to battle. This takes the form of a pole or staff bearing a trophy or sign and is carried in a wagon drawn by a span of fierce hobhounds. So long as their standard remains intact, any Mournguls are subject to frenzy 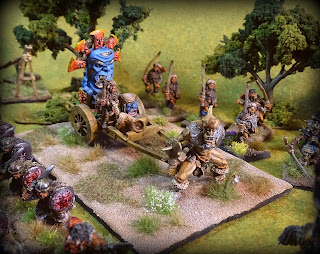 The Hobgoblin standard is the symbol of a tribe's honour. Any enemy unit engaged in close combat against it is hated by all Mourngul units on the table 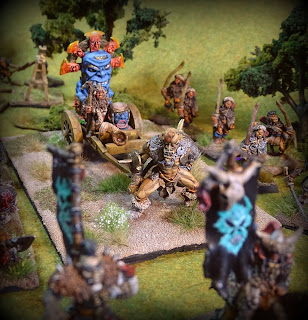 According to the 3rd ed rule book, the army standard had to be included in all Hobgoblin armies and any Hobgoblin wizards had to store at least half their magic points in it. Points placed in magic standards like this are effectively doubled and no test is required to cast spells using them from this reservoir, even if the wizard himself is running low - they can't, however, be recovered by resting.  As the army standard is such a focal point of the army, I figured I'd best do it justice - more on that little project here. 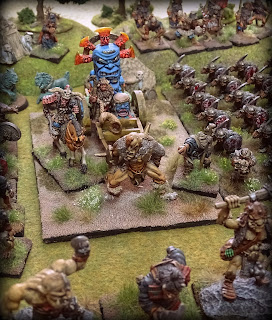 The Mournguls are the ruling tribe, who's head is the great Hobgobla Khan himself. Many of the Hobgoblin armies that rampage further afield than their usual stomping grounds in the Northern Steppes are often led by minor Khans of vassal tribes or renegades of the Mourngul tribe itself, who have either fallen out of favour with the Great Hobgobla or have decided to carve out their own empires in distant lands. 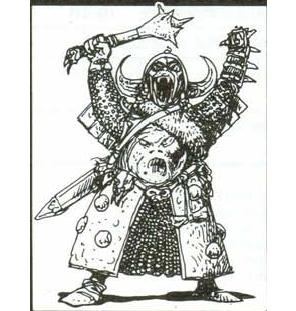 So far Thugruff (from my Trolltooth Wars project) is looking like a good candidate for my general, although he'll need a name change and maybe a repaint of his banner for something that would fit his dual role a bit better. Here he is flanked by his personal Standard Bearer and Shield Bearer. 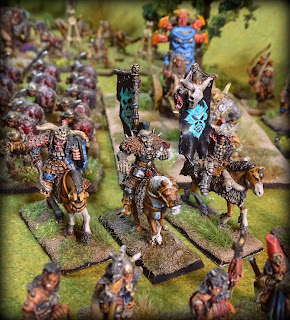 Shamans are an important part of Hobgoblin society and my army includes two on foot as well as the Master Shaman accompanying the army's totem. The two Temple Dogs could represent summoned Daemons - they were a bit small for riders and I'm still searching for the Citadel Temple Dog and Hobgoblin rider! 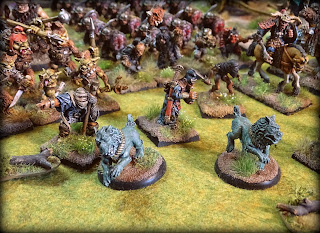 On to the backbone of the army and the Hobgoblin fighting regiments. First up are Throgg's Despoiling Hobgoblins of the Darklands, a unit I like to imagine are a bunch of Mourngul Renegades who have tagged along with a richer and more powerful Hobgoblin noble making his own way in the world away from the reach of the Great Khan. 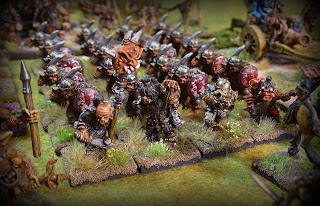 I have another slightly larger unit who could well be fielded as Hobyars - Hobgoblin warrior nobles and their retainers. These elite troops are the core of the army. 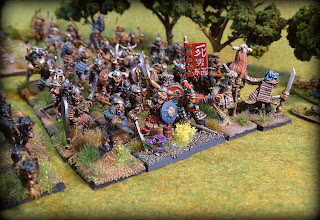 I have a small unit of ten archers to provide some missile support - something I'd like to expand on in the future and with Satanic Panic's new line in the offing, something which should be very achievable. 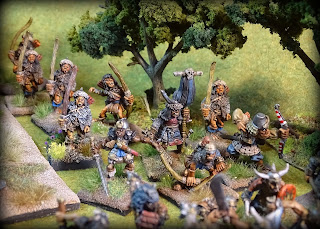 Any Steppe army worth its salt should have plenty of cavalry and this is another part of the army that could do with being bigger. At the moment it's just these four Orc Horse Archers from Ral Partha who will be being reinforced in the future. I also have a growing unit of the old Grenadier Wolf Riders, who I will be painting up as Hobgoblins from some Vassal Tribe of the Steppes. 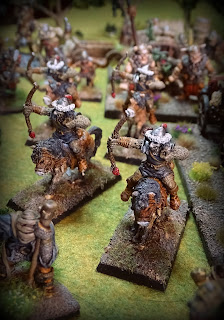 Having copied or stolen the idea from subjugated or allied Cathayan settlements, the Hobgoblins enjoy Rocket Artillery support. A lot of fun to use in battle but not necessarily the most accurate of weapons! I'm looking forward to painting up the Cathayan rocket crew I have waiting patiently in the paint queue along with the rest of a slowly growing Cathay army. 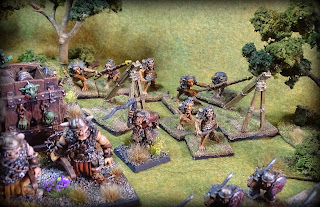 On to the non-regular troops which really give the Hobgoblin army its colour! My favourites and pride of place is the Hobhound pack. Took some time to collect this many but they look great on the battlefield and provide a fast moving and dangerous unit. 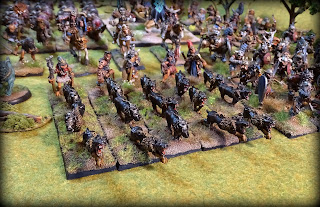 Ogre slaves who are past their best often end up lobotomised and pulling carts and wagons for their Hobgoblin masters. Those who are yet to suffer this ignominious fate are put to use on the battlefield. 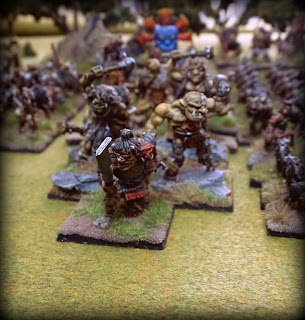 I have a fair number of Ogres painted up now but these chaps looked like they fit in the best with the Steppe flavour of the army. 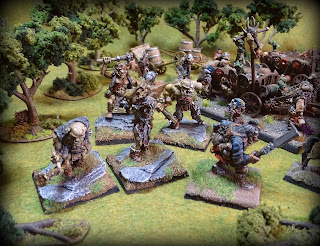 Another fun and not strictly Warhammer addition are the Bugbears - they just fit the flavour of the army so well I had to include them! 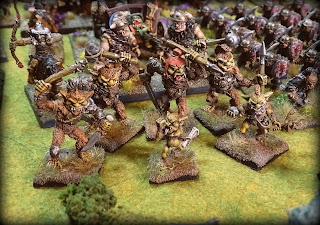 Another favourite of mine is the Assassin - a nasty little surprise that can, according to the 3rd ed rules, shoot at enemy characters when their unit gets within 8" of the unit it is hiding in. The Assassin can also interrupt the normal order of close combat and challenges to attack any member of the enemy unit. 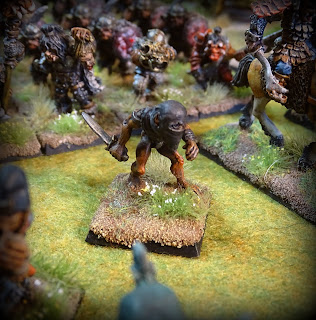 Lastly, and depending on your point of view, the most important part of the army - the Baggage Train. With the latest additions thanks to the wagons I've done for the Dolgan Raiders scenarios, the baggage train is looking pretty healthy! Happily I had a few extra Discipline Masters to chivvy the Ogres along and any amount of Goblins to play the part of camp followers to really give it an authentic feel. 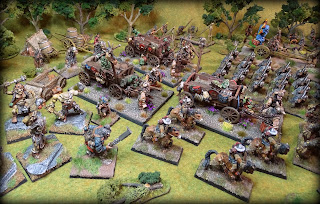 So where to next with this army? Well I should have some brand new multipart Hobgoblins wending their way from Satanic Panic's latest kickstarter at some point so that should provide another unit and some more Hobhounds. I've already mentioned the Grenadier Wolf Riders I have and I'd like to expand the Horse Archer wing too. I reckon some of the Cathay troops I have could be included as mercenaries, unscrupulous allies or even vassal levies - I'm quite keen to get to grips with the various Samurai and Ninja I've got waiting for a lick of paint! Of course the army can be reinforced with the Black Orc and Goblin Wolf Rider units I have already painted.

Most importantly though, I look forward to getting it on to the table for a game some time soon!