The first game I played at BOYL this year (other than the excellent Jetbike race on the Helsreach table) was the culmination of the Tale of Four Gamers: Nerves of Lead painting challenge myself and three other friends embarked on soon after last year's BOYL.

For various reasons two of our compadres had to drop out so that left me and Ashley to duke it out on the table top. To spice things up a bit we decided to introduce a simple scenario with a limited number of turns rather than just a line 'em up and knock 'em down style battle.

To this effect Ashley's Liche had taken possession of a cache of magical spices... 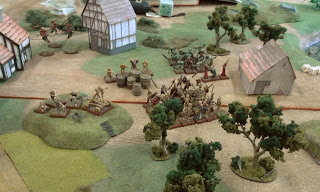 ... valuable booty that Calen Rauko and his vicious Dark Elf raiders would very much like to get his hands on! 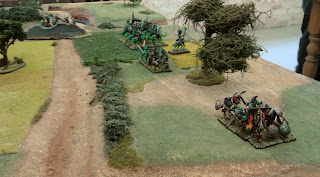 The two disgraced sisters, Calemirnith and Calemirthel, along with their Witch Elf minders advance on the main block of Skeleton Warriors. 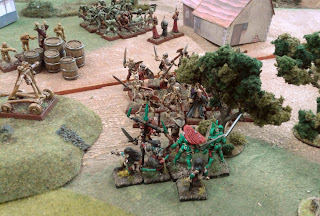 Whilst Calen Rauko leads his Cold One Reavers and the Shadows out on to the right flank. 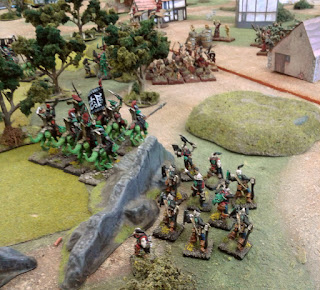 A well placed shot from the Screaming Skull Catapult tears two of the Reavers from their mounts. 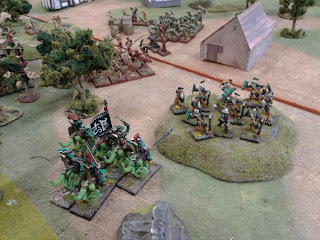 And the Witch Elves are harried by a fearsome flock of Carrion. 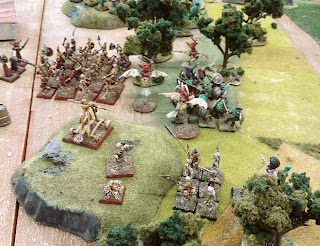 Kassandras Elvira, the Dark Elf sorceress raises a small unit of her own Undead to distract the three Wraiths bearing down on her. The Witch Elves are overwhelmed by the Skeletons and the two sisters decide to make good their escape. Captain Malig marches his warriors in to replace the gap in the line. 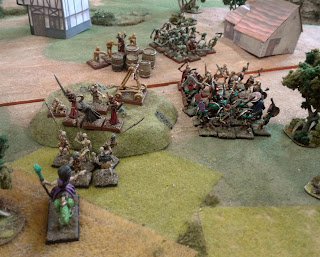 With a crash Rauko's Reavers charge in to the skeletons flank and the Dark Elves make short work of them. The Shadows attempt to cover the Cold One's exposed flank with their repeating crossbows but only bring down a few of the Ghouls massing for their own charge. 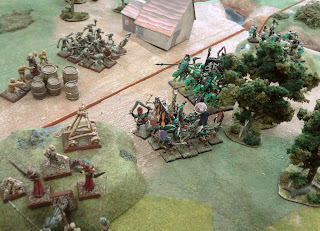 Elvira beats a hasty retreat as her skeletons are cut down by the Wraiths. 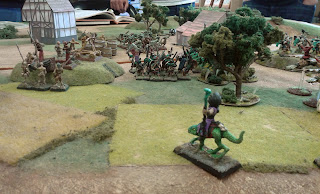 The Ghouls shrug off the patter of crossbow bolts and charge the Dark Elf cavalry in the flank, forcing them to flee. The sight of their general beating an ignominious retreat panics the Shadows in to their own rout. 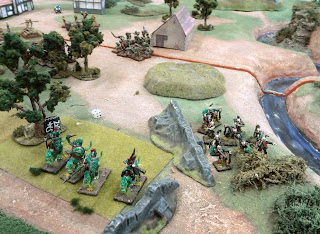 Ready to avenge the slight to their General's prestige, Captain Malig charges the Ghouls. Several of the gibbering horrors are cut down and the survivors flee in terror. 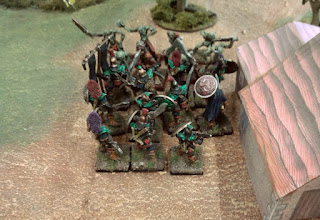 As the Ghouls are cut down, Elvira gives voice to the incantations of an ancient spell to destroy the foul minions of the Undead. The three Wraiths are consumed by the magic and swept away to final oblivion. 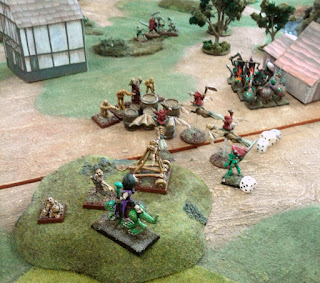 Having lost her sister to the repeated attacks of the Carrion, Calemirthel stands her ground. She sends one of the foul creatures plummeting to the ground and just manages to fend off the attacks of the two survivors. 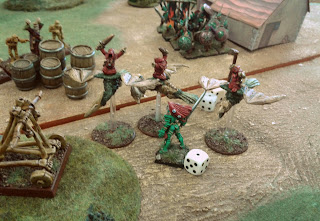 And with that the two armies break off from the attack. Calen Rauko's horn sounds the retreat as time and tide are against them whilst the Liche, Laomann the Abominable gloats over his magical acquisition - now much needed to fill the ragged gaps in his Undead horde...

So -  a great little game and a very satisfying end to our painting challenge, despite it fizzling out somewhat in the last few months before BOYL! I haven't played a game of Warhammer 3rd ed this small in some time and it was most enjoyable. We ended up playing 5 turns over three hours or so and even with the tiny force of Dark Elves that 1500 points gets you I didn't feel short of tactical options. Much as I love huge games of 3rd ed these smaller skirmishes shouldn't be forgotten!

Congratulations to Ashley for a well played game, for hanging on to his objective and for a beautifully painted Undead army!
Posted by Thantsants at 14:09