Is this going to be a stand-up fight, sir, or another bug hunt? Space Fleet @ BOYL 2017

On to the Saturday at BOYL whihc kicked off very pleasurably with a game of Space Fleet with my old pal Paul. You may remember we tangled in the depths of space last year - a game which saw Paul masterfully commanding the Imperial fleet to victory!

This time Paul brought along a very impressive Tyranid fleet (and Eldar too - more of which in a later post) so I decided to defend the Imperium this time. 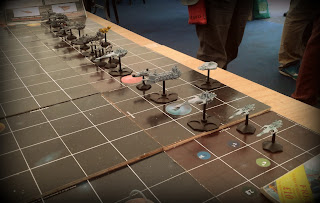 We decided to play a war of attrition with waves of Tyranids assaulting the thin grey and blue line of Imperial ships. 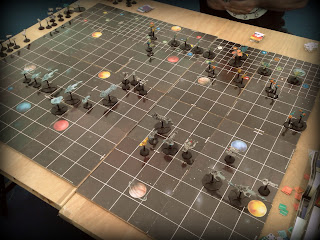 Waves of Spore Mines are the first to test the Imperial fleet - Gothic battleships bring their powerful broadside batteries to bear. 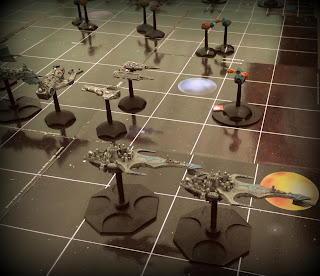 One or two get through - very nasty! 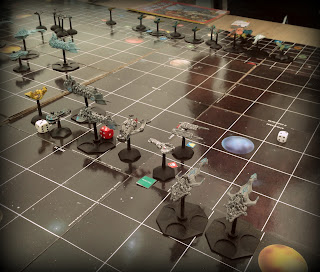 Especially when we got the rules slightly wrong for them! Apparently Spore Mines can't have Action cards played on them and just move one square each turn. I can see why as they proved extremely deadly given three action points and the infect card! 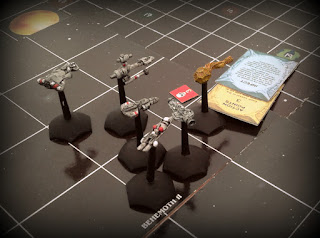 An Imperial fighter screen attempts to slow the approach of a squadron of Hellblaster Kraken - gigantic space squids that latch on to enemy ships and discharge huge charges of electricity in to them! 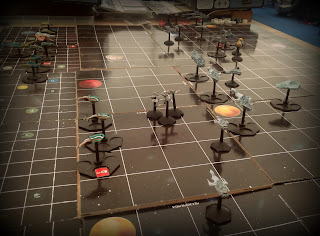 My Dictator tackles a Ramsmiter Kraken - a clash between two close combat specialists. The Dictator uses its arms to grab on to its target, causing damage in the process. It then drills in to the enemy ship to unleash legions of crack boarding troops. The Ramsmiter Kraken on the other hand has been bio-engineered by the Tyranids to aggressively ram its reinforced snout deep in to the bowels of its prey and disgorge thousands of Tyranid warriors and Genestealers. 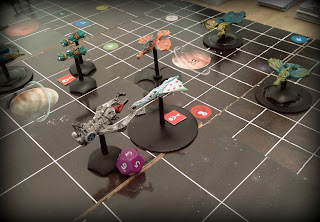 I think the Dictator came off best in this particular encounter! 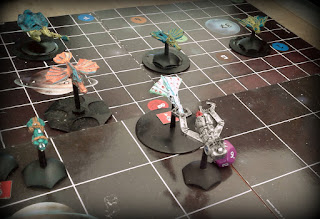 The Hellblasters reach their target despite repeated broadsides from the Gothic Battleships and Firestorm Cruisers in their path. 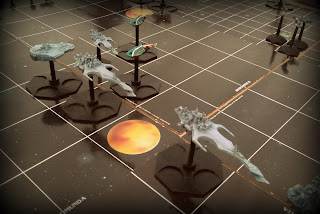 One of the surviving fighter groups makes a "Death Star" run on one of the Tyranid Hive ships - these tentacled monstrosities generate a large amount of Action cards for the Tyranid fleet so taking one out can do a lot towards crippling the aliens' ability to act. The Hive Ships can also spawn reinforcements with the right Action card - as can be seen with the pair of Drones blocking my fighters' attack! 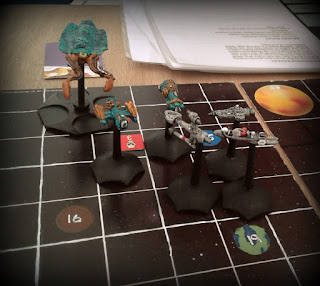 Long range fire from a squadron of Deathurner Kraken significantly damage both the Castellan Shield ship (here represented by the strange "Canary" ship - from an older range of starship miniatures) and the Constellation Targeting Ship, forcing them to move away from the Emperor Capital ship they were conferring shield and shooting bonuses on. A wise precaution as they go up with a big bang should they be destroyed! 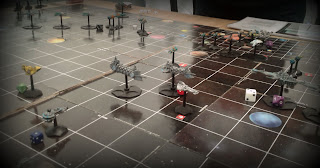 The Dictator attempts to finish the job the Fighters were unable to accomplish and tries to board the Hive Mind ship. It was a brave attempt but ultimately futile against the Tyranid's hideous strength! 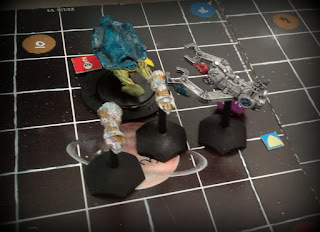 Deathburner Kraken continue their lethal barrage as more waves of Spore Mines close in on the badly damaged Imperial ships. It looks as though another sector of Imperial space is lost to the inexorable advance of the Great Devourer... 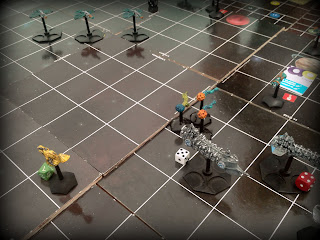 All in all a great game against a worthy opponent - and we even got more of the rules right this time! This was also thanks to Paul's excellent admin skills in printing out and laminating data sheets for the different ship types and collecting the rules from four or five White Dwarf magazines in to one handy print out.

I think the next thing to tackle is how to easily track shield and structural damage on the Imperial ships in a game of this scale - things can get a bit cluttered with lots of counters on the board that have to move with the ships represent damage to the sides, front and rear of each ship. I wonder whether printing out a separate sheet for each fleet to create a fleet roster would be easier. Then damage could be recorded on the sheet rather than with counters on the board - a little like the system in Man O War where each ship has its own card to record damage through out the game. 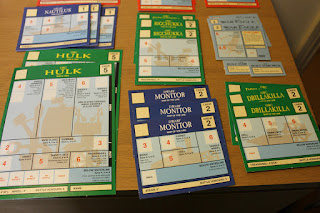 As I'm playing a game of Man O War at next year's BOYL I'll have to get better acquainted with the rules to see if would work!