Another day, another planet, another futile struggle against the overwhelming hordes of the Hive Mind! 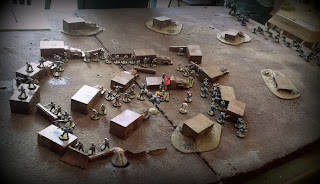 Told you there was a bit of a theme for me this year!


Sunday is always a special day at BOYL. The combination of a two day hangover, lack of sleep thanks to fininshing drinking at 2am, the shock of paying your hotel bill and bar tab and the realisation that there is only a matter of hours between you and the end of this magical event before you habve to drag your sorry carcass home to the real world all combine to create a bitter sweet melancholia.

My thanks then go to Nik and Paul for stepping in to provide me with opponents when poor old Ollie couldn't make it and my apologies for being a little less than the life and soul of the party - Sunday morning was a bit of a struggle which was definitely nothing to do with the company or the excellent game of 40K 2nd ed we played! 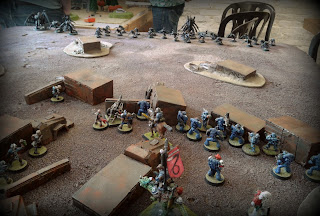 For this game I had crudely constructed a board that was roughly 6x4' - I say roughly as it was literally done a  couple of days before BOYL! Not too bad for a freebie - the insulation boards were left over from my Mum and Dad's house renovation, the sand came from the local beach gathered by my lovely wife (got enough left over to give me free basing material for life!) and the ruined trucks were free miscasts given ojut by the ever generous Curtis of Ramshackle games! 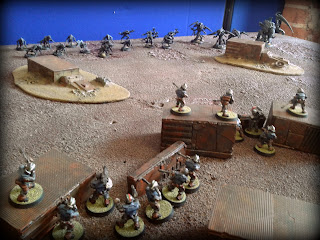 The reason I had wanted to bring my own table was that we were setting the game on Tallarn to match Ollie's Imperial Guard army. Obviously they would need some cover and something to defend so I thought why not make it some kind of ruined remains from the great tank battles of the Horus Heresy. Not having loads of old tanks to litter the battlefield with, I went with these Ramshackle trucks to represent an ancient supply column come to grief! 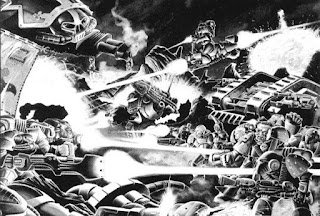 We opted to play a very simplified version of the Glazer's Creek game that featured in White Dwarf 222 with a meagre Imperial Guard force defending a central strongpoint against successive waves of Tyranids. 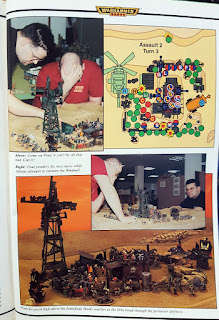 For days the defenders of Planet Q had cowered in bunkers and foxholes as spore mines and worse had laid waste to the major population centres. Supply lines were cut and the chain of command was in tatters. Then they came.

Great bio-engineered landing pods disgorged their foul Xeno cargo on to the planet surface and the surviving elements of the Imperial Army and PDF found themselves surrounded and overwhelmed. Colonel Dienes of the 7th Necromundan Infantry Regiment curled his lip in the vague parody of a humourless grin at the irony of his own unit's nickname - the Lucky Sevens. Luck, along with men and ammunition was in increasingly short supply.

He and the rag tag bunch of survivors he had scraped together from the ruins of the planet's former capital, Fairwind, had finally made it to a defensible position. He cast a critical eye over the make shift fortifications his men had patched together from some ill fated convoy destroyed in a past conflict. It would have to do. Christening it Outpost Nine may only have made it easier to record the place where its defenders fell but at least it was something for the men to identify with. Something for them to defend. No one wanted to die futilely and forgotten in a place with no name.

He had lost contact with High Command, the Fleet and the rest of his regiment. His men's morale hung by a thread and they faced an implacable foe who vastly outnumbered them and would give them no quarter in battle. His speech to the soldiers assembled before him was short and simple -

"I have only one rule. Everyone fights. no one quits." 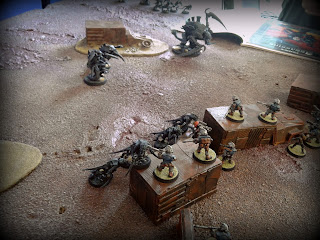 Over on the East wall, Sergeant Zim supervises a scavenged Lascannon while Space Marines of the Executioners chapter open up on Hormagaunts approaching their position. 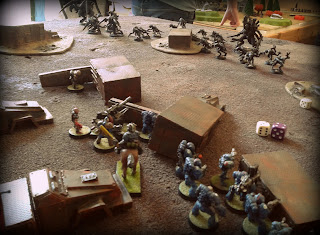 A Screamer Killer shrugs off the intense fire and bears down on the Lascannon! 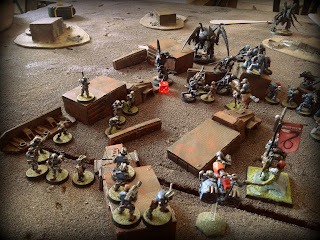 The combat on the West Wall is short and bloody. The few survivors of 2nd Squad and the Heavy Weapons Squad pull back to get a better shot at the remaining Tyranid threatening them. 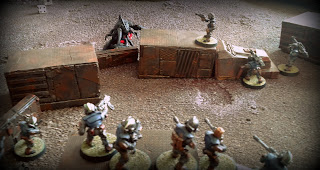 The Executioners meet the Hormagaunts head on as the Screamer Killer looms closer. 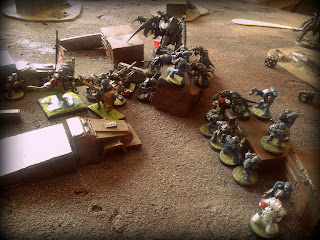 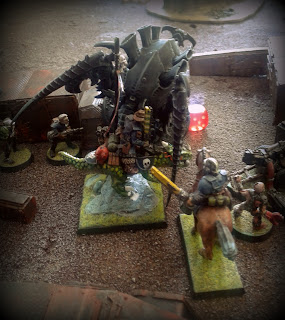 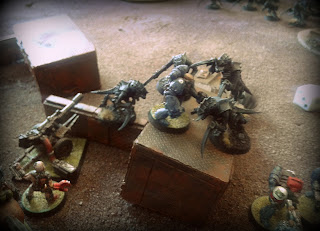 In a quieter spot of the battlefield an Ambul ambles off in search of somewhere more peaceful to chew rocks... 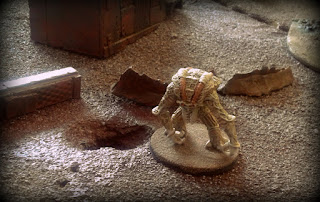 As one, 1st Squad spring to the defense of their Colonel, as does Sergeant Zim. The hail of Crak grenades barely scratches the hard chitinous plates of the Xeno monstrosity. 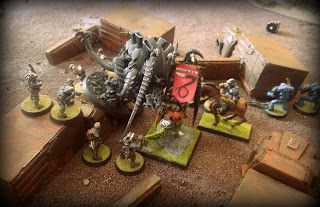 Things look grim on the West Wall as one of the last survivors of the Heavy Weapons squad stares up at his impending doom... 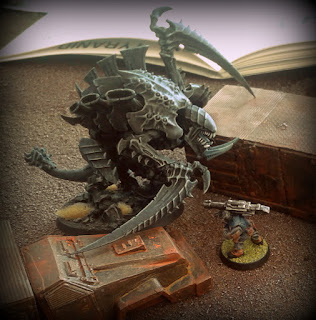 Another wave of Hormagaunts slams in to the hard pressed 2nd Squad. 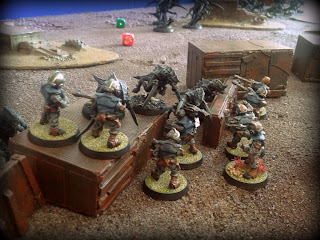 They weather the charge, fix bayonets and prepare to sell their lives dearly! 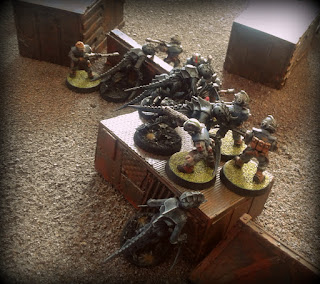 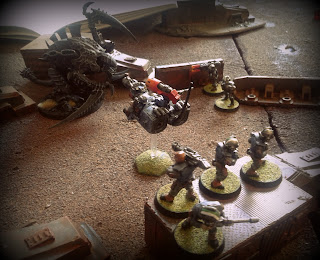 With the loss of 1st squad and the brave Sergeant Zim falling in battle, Colonel Dienes finally puts paid to his gigantic foe with some assistance from Space Marine Captain Reiko. 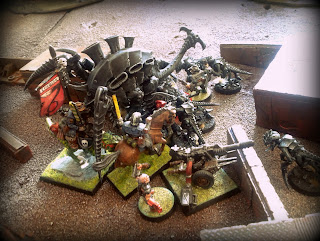 The rest of the Executioners blow a clear path through the oncoming Genestealers enabling the Servitor to score a direct hit on the Hive Tyrant behind them. The Synapse creature goes down with a howl. 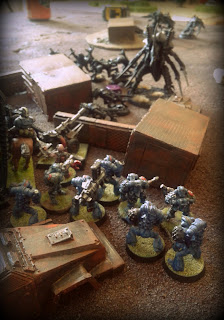 There is no let up on the other side of the compound as Tyranid warriors rush in behind the fallen Screamer Killer. Again the Heavy weapons of the Imperial Guard roar and more Xenos arte exterminated. 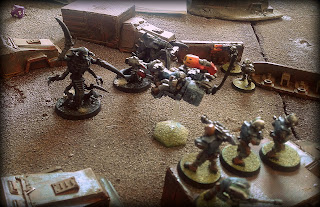 Wearied by his ordeal with the Sreamer Killer, Colonel Dienes bravely faces his next foe. However the wiley Hive Tyrant is too much for him and the brave warrior is felled by the thrust of a huge bone sword. 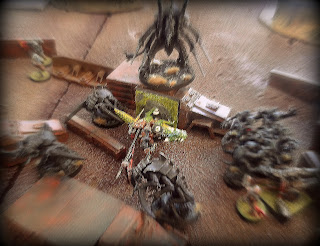 As more and more Tyranids pour in to the compound, the defenders' last hope is swarmed by Genestealers. Captain Reiko fights resolutely on but the inevitable comes all too quickly and with that the fate of Outpost Nine is sealed... 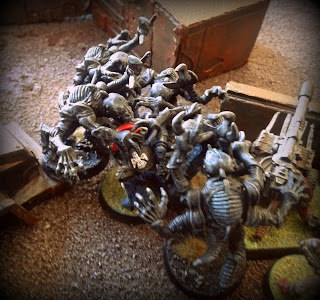 Well another very enjoyable game of 40K 2nd ed and I must admit there is something about playing desperate last stands that really appeals to me. Thanks to the game I played the day before and Paul's guiding hand, we had the close combat rules down to a tee and despite my fuzzy head everything went very smoothly. Thanks again to my excellent gaming companions and I look forward to combining my and Nik's Tyranid hordes to take on Ollie's Tallarn forces later in the year...

And yet my time at BOYL was still not done. In the dying hours of Sunday afternoon I had one more game to play and it was a special one!

Stay tuned!
Posted by Thantsants at 01:54