... and false advertising!
Blood Bowl fever certainly seems the order of the day at the moment!
Here's the last few players to finish off the squad for my mixed team, the Slann in Spacer's - also my Round 3 entry for the LPL.
﻿ 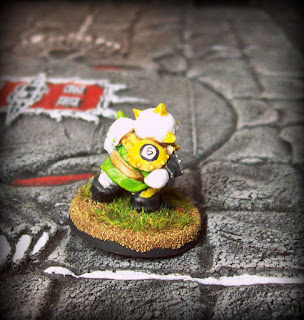 Now some of you may be thinking that I'm playing a little fast and loose with the rules in terms of the make-up of the team - and you may be right to a certain extent! Certainly my choice of players was dictated somewhat by the vagaries of ebay and rather than collecting separate teams of Dwarves, Elves, Humans, etc, I gave the wallet a rest and combined my ill-gotten gains in one team.

Back in the good old days of 2nd edition (yes, pre-block dice, so I know it wasn't all roses!) you could field mixed teams, although you had to keep an eye on each race's dislikes and animosities. 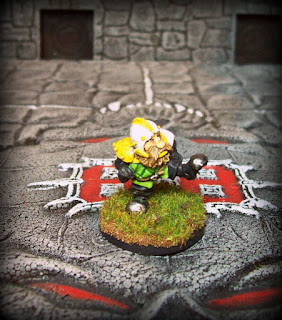 Players of  races who dislike each other may play on the same team, however the problem comes when the issue of passing the ball arises. A D6 had to be rolled and on a 1-3 the pass/hand off could be made as normal, but on a 4-6 the player refuses to give the ball up and can either hold on to it or pass to a player of a race he doesn't dislike.

Players suffering Animosity (different to the 3rd ed rule!) towards a particular race may not play on the same team.

So where does this leave the Spacers?

Luckily Humans only dislike Chaos Humans and Dwarves, Goblinoids and Dark Elves, etc. The Treeman has similar feelings although other large monsters are included in that list. Halflings are happy playing with anyone as long as they are fed well - similarly Ogres seem particularly enlightened in terms of race relations and will play with anyone as long as they get to hit stuff! Dwarves suffer animosity towards Goblinoids and dislike Elves. 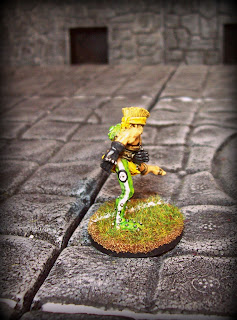 However the real problem are the Elves, who dislike all other races and suffer Animosity towards Ogres, Trolls, Minotaurs and all Goblinoids!

So where does that leave me in game terms? Potentially the Dwarves won't pass to the Elves, who in turn might not pass to anyone and refuse to be on the same pitch as the Ogre. The Treeman could end up refusing to pass to the Ogre, leaving only the Humans, Dwarves and Halfling who can be relied on to get on with each other! 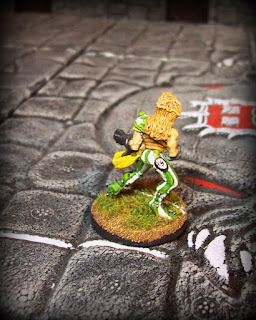 The solution - two different squads for facing off different opponents.


Squad 1 - Humans, Dwarves, Halfling and Ogre - for taking on tougher teams and indulging in a bit of Halfling tossing!

Squad 2 - Humans, Dwarves, Elves, Halfling and Treeman - A flexible arrangement utilising Human and Dwarf muscle with their Blitzers (and Blockers, depending which edition I play) along with Elven catching abilities and higher agility. Plus I've always wanted to field a Treeman - either for throwing the Halfling or taking root in the opponents half and causing a nuisance there!

In other news - looks like the Spacers will be getting a game some time in the near future. Warlord Paul has laid down the gauntlet with his Greenback Gales...
Posted by Thantsants at 16:41