Just a quick post this evening as I've a load of painting to get done for this week's LPL entry and I'm behind schedule yet again.

I mentioned earlier in the month that Foundry had lent their support to the Goblinaid cause by offering the excellent self portrait Kev did, along with a random assortment of Snorklings. These are great little minis which apparently Kev would sculpt out of the odds and ends of green stuff he had left at the end of the day during his time as a sculptor at Foundry. 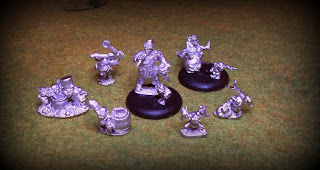 I ordered a set a while back which seemed a long time in arriving. Anyhow after a couple of emails to Foundry lo and behold, a replacement set was dispatched forthwith and are now hogging the front of the painting queue. Many thanks to Matt at Foundry for the excellent service and should the lost pack ever turn up I'll be acting on his suggestion to paint them up and offer them for auction to raise a bit more for the cause. 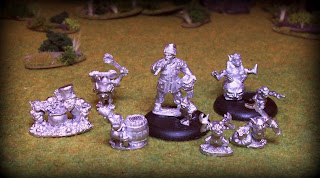 Other exciting news is that the good folk at Foundry are planning to re-release all of Kev's stuff, including the 117 Snorklings he sculpted, at some point in the future. However, as they quite rightly say this won't be for a while as for one they don't want to tempt people away from the  imminent release of the pack of 40 or so Goblins sculpted for Goblinaid.