Onlinehammer! The Battle of Plank Street...

As some of you may already have seen from Erny and Warlord Paul's posts, we had a fantastic game of WFB3 on Friday night - online! 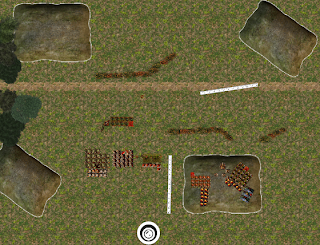 Firstly, huge thanks must go to Erny for all his hard work and genius in setting the whole thing - in particular photographing his minis from above to create the virtual playing pieces! We used Roll20 to play the game which worked brilliantly on the main part. Next time me and Warlord Paul could do with sorting out our microphones so we can all chat instead of poor old Erny talking away while we furiously typed our questions, taunts and went off on lengthy, non-game related tangents!

The game played out much as it would have done on the table - we stated what we wanted each unit to do, rolled dice on the dice log, measured distances and forgot rules. Wheels and turning units is a bit tricky at the moment but not a problem between easy going players. In fact there's nothing to stop you lot setting your own games up once you've registered with D20. Perhaps one day online games at the weekends will be a real way of us Oldhammerers playing together on a regular basis...

As Erny intended, we certainly felt like we were round at "his place" - the beer (and cidre) flowed in ample amounts, snacks were consumed and much banter and chat took place. In fact we were so successful in creating that club atmosphere that the game lay forgotten on a couple of occasions as we pontificated on various subjects! Nor did we finish the game after four hours of play - a good excuse to get together again and continue the fun.

As Paul mentioned on his blog, such was our excitement and child-like joy that many of the key rules went out the window - mainly animosity and stupidity! However, even though my poor Dwarves suffered grievously in the face of such an unnaturally well co-ordinated Goblinoid assault, we were having so much fun it mattered not. Actually, I was rather taken with the tale of Chester and Julian - the Trolls with aspirations of higher education!

And the story so far? Here's the Dwarves' perspective...

King Cnut Axe Cleaver proudly surveyed his troops. To his left ranged the elite Longbeard unit, the Full Borowski's, led by Gunter Barrel Lover, and to his right the unhinged Troll Slayers of the Ginger Nuts gnashed their terrible teeth and flashed their terrible beards. Behind him, the faithful warriors of his own unit, the Angry Growlers, were working themselves up into their highly vocal battle rage.

He had deployed this doughty column of warriors in the small valley of Landinstrip, which lay to the South of Plank Street - the road that ran between his Royal seat at Axwoon'd and the Cooperage they had set up nearer to the Lonely oak woods. The Goblinoid raiders were bound to spread themselves out in an unorganised mass and Cnut looked forward to destroying them in detail while the usual squabbles and petty arguments disrupted their battle lines.

To protect their right flank Cnut had sent his two units of Crossbowmen and the Bolt Thrower, Bjork the Wailer, to take up position atop the the gentle rise of Firry Mound - although why the hillock had been named thus was a mystery as the area was predominately covered in deciduous trees...? Whatever the etymology of the hill's name, it would provide a commanding view of the approaches from the road - any Greenskin scum attempting a flank attack would have to do so in the teeth of the combined firepower of the Crossbowmen and the War Machine.

Yes, Cnut was feeling pretty pleased with himself - all he needed was some Orcs to kill. And here they came! Yet something was wrong. They seemed... well disciplined, purposeful. Organised! Well Dwarven steel would soon put paid to that Cnut thought. 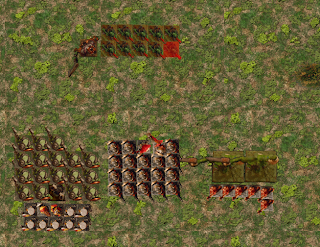 The air hummed with the passage of a multitude of quarrels and the ranks of one of the units of Orc archers wavered. The impact of one of Bjork's great spears transfixing two of the foul creatures tipped the balance and sent them fleeing! Things were looking up and Cnut encouraged his brave warriors to greater inventiveness in the invectives they were hurling at the oncoming horde. 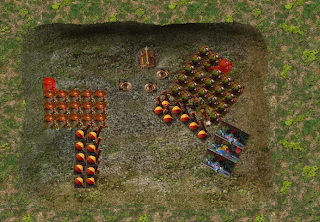 Despite this brief setback, the Greenskins kept on coming. A seed of doubt entered the Dwarf King's mind - what if they are organised? What sorcery could be strong enough...What was this Tim Mee Tay Lorrr they kept shouting about?  These and other questions whirled through Cnut's head in the brief moments before the entire Goblinoid battle line crashed into his!

All about him pandemonium reined - the Longbeards were forced back, the Troll Slayers seemed to be asking the Trolls to slay them and the Crossbowmen could no longer be seen beyond the leaping figures of Goblins that swarmed over the hill. Was this how it was to end? Had the Dwarve's worst fear of a well co-ordinated and disciplined Orc horde come about? How had the usual tribal differences been laid aside - what was uniting them? Was this the end of all goodly things?

Cnut shook his head to rid himself of his uncharacteristic confusion and consternation. Think of the ale man, he scolded himself. If the Orcs were to win here then the cooperage would be theirs and they had no more idea about barrel making than they did about brewing - bloody heathens. Worse still - they might raid the grain stores, burn the hops and begin making their own foul and fizzy brews - Pisslen and Laaggghhhhh 'urr...

There was no way that shit was going to be brewed in Awoon'd...