Brommedir winced as another of his bowmen was skewered by the rampaging Orc King. He narrowed his eyes and glowered at the ever growing Orc column gathering by the bridge that Chardz and his engineers had so diligently repaired. Nodding his exquisitely plumed head in the Orcs' direction, Brommedir turned on his adjutant.

"Aydendorn, what's wrong with them? Why don't they fight?"

Taking a deep breath, the long suffering officer shouted back,

Aydendorn rolled his eyes at his commander's perennial deafness and leant a little closer,

"Can't you see that bloody great Wyvern circling up over the hill? He's counting your archers. Testing your fire power against its thick hide, before sending his horde against us."

Brommedir was about to launch into a diatribe against low down, dirty Orc tactics, when he was interrupted by another tirade issuing from the vicinity of the East Wall. Druid Snart, who was by now literally frothing at the mouth, was busy heaving at one of the wagons that made up part of the defences. 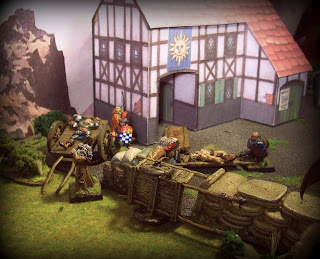 The cart slowly toppled back onto its wheels, the crash of its landing putting an even more sudden stop to the Druid's cries. The Elves looked on in bemusement as the madman began hopping around clutching his foot, his face darkening into an even more irredescent shade of crimson than before.

The archer's attention was soon drawn back to the highway, however, as the braying of horns, beating of drums and tramp of many feet began to echo down the valley.

The Kwae Karr were coming... 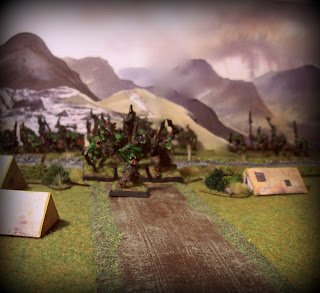 Osrim Chardz looked up from the great sword he had been impatiently polishing.

"Sir, the sentries report Orcs to the north east. Hundreds of them."

So that's what all that racket was. Osrim harrumphed testily into his beard; the Elves were no doubt enjoying a bit of target practice already - fine if you were into that sort of thing, but definitely not his cup of ale. All this sitting about, manning the barricade, however, was trying his patience.

"Right lads, we're not going to sit here all quiet and meek till the greenskins finally show their faces are we?"

The small group of sappers looked expectantly at their revered leader,

"What do you suggest boss?"

With a hearty grin, Osrim continued,

"Well, you hear that awful din they're making? We're not going to stand for it right. Do you think the Dwarfs can't do better than that, Oswen?

Oswen, one of the stouter members of the company, returned the grin with a wide beam of his own and replied in a voice as rich as Bugman's Stoutback Stout,

"Well, they've got a very good bass section, mind, but no top tenors, that's for sure." 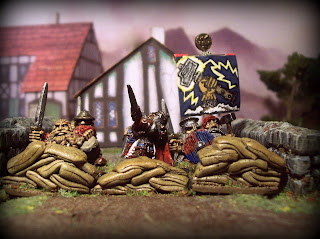 And with that a mighty chorus of Dwarven voices ascended to do battle with the Orcish chant that assailed the very air,

Dwarves so hardy happily dreaming
Of honour, fame and foes a-screaming
Gird yourself with armour gleaming
Onwards to the fight

Though the hills be swarming
The foe, his ranks are forming
Take a draught, at danger laugh
The brew your temper is a-warming
Dwarves so hardy be not tardy
Lest you miss the battle's fury
Wave your burnished axe heads 'fore ye,
Axes of the Dwarves! 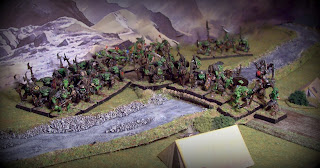 Undeterred by the hail of Elven arrows and Dwarven abuse, the Orcs continued to pour across the bridge. Magyar Ironfist, still seething from the implied insult of being sent to deal with the puny defences at Linden Way, led the vanguard of his tribe onwards, brandishing his great spiked mace. Whether his howls and cries were directed at the defenders of Orc's Drift, or at his great and noble king, who circled above the Orcish column, was not entirely clear. 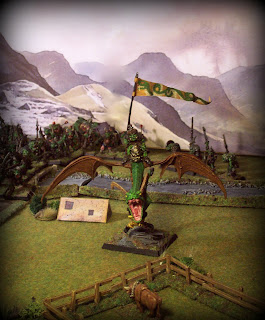 Certainly the king's personal troops, the F'yar Guard, were not feeling particularly welcome amongst the Kwae Karr, and lurked towards the back of the pack. 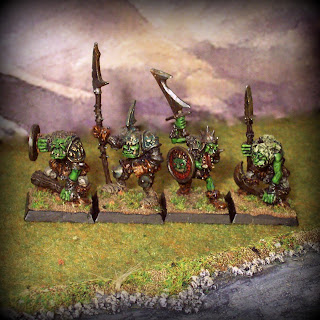 As the Orc advance ground inexorably towards the compound, Brommedir leaned from his vantage point at the top floor window of the hospital,

At this extreme range only one Orc fell, unnoticed by the seething horde. 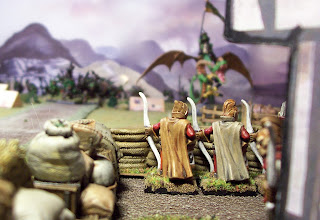 Back in the compound, Snart's rescue attempt was gaining momentum, despite the grievous wound to his toe. Having laid out one of their comrades on the cart, Bertolac and Fernbreth headed back towards the hospital to fetch another patient. Gymlet unceremoniously dropped his end of the stretcher, rubbing his back and bad leg furiously. Luckily for the unconscious occupant it was only from Dwarf height that he had been dumped. Beli fliched as his end of the stretcher was snatched from his hands by the impact. Nervously looking over his shoulder, disturbed by the noise of the Orcs' advance, he hurriedly returned to the comparative safety of the hospital. 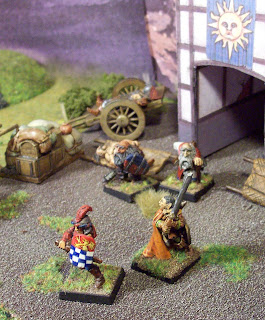 Meanwhile Snart, seemingly without a care for his own safety, limped out beneath the volleys of Elven arrows, towards the small paddock that lay between the village and the Orc lines. 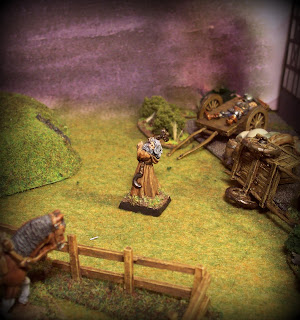 F'yar came in fast and low, strafing the Elf firing line once more. The bowmen coolly stood their ground and unleashed a volley as the great beast swept down upon them. Both rider and mount were struck but the arrows failed to penetrate their targets.

Once more F'yar's lance buried its head in Elven flesh, while another struggled in vain against the Wyvern's powerful jaws. 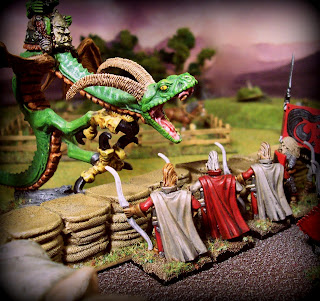 The Kwae Karr Orcs kept on coming, a unit of archers following the armoured spearhead onto the bridge. 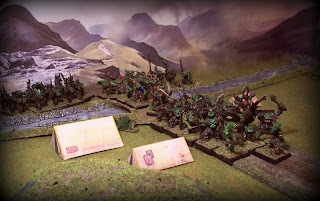 The bloodied but unbowed Elves let fly another volley at the Wyvern's receding back. At this close range no-one missed and this time one of their arrows found a weak point in the creature's leathery folds. A ragged cheer went up at its surprised squawk of pain. 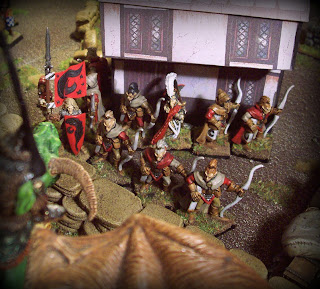 Brommedir's detachment continued to target the Kwae Karr, bringing down another two Orcs, while Snart made it unscathed to the paddock fence. 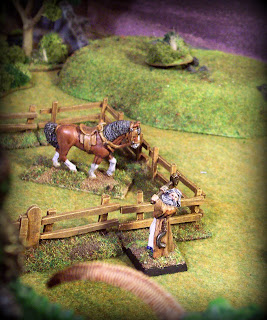 By now the Orc archers had formed up along the river bank, although at this range they were unlikely to hit their Elf adversaries behind their mealie bag wall. 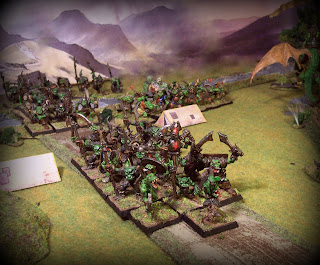 Magyar and his column surged ever onwards, unconcerned about the dead and dying left in their wake. 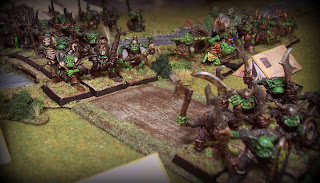 F'yar, snarling at the Elf bowmen who dared wound his pet, soared skywards in a great circling arc, in preparation for another pass. 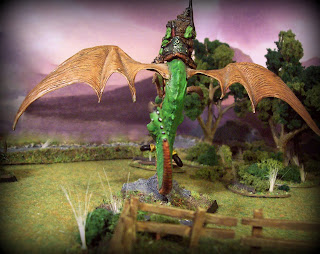 With the aerial threat gone for the moment, Brommedir's bows focussed all their fire on Magyar's unit. Despite the diminished range and all the Elves finding their mark, the Orcs' innate toughness and ramshackle armour protected them from harm. 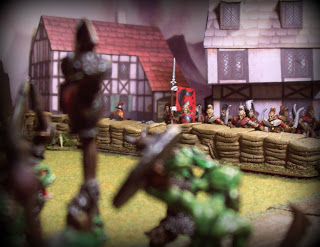 Whispering into the panicky animals' ears, Snart slowly soothed and gained mastery over them through sorcerous ways. Nuzzling up to the old druid, both draught animals were ready to do his bidding. 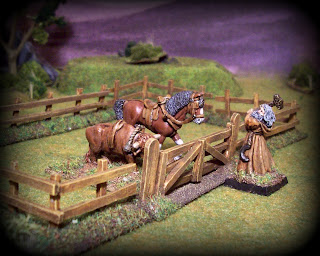 Back at the hospital the walking wounded staggered out with the last two bed-ridden patients and made their painful way over to the barricade. 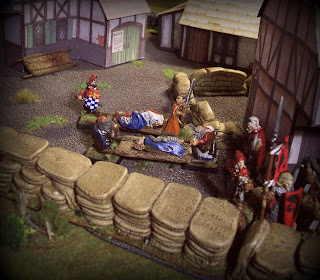 Again Brommedir bellowed out his orders and another hail of arrows sped towards the great mass of Orc soldiery. Despite dropping almost the whole front rank of the leading column, the Orcs continued to lope unconceredly over their dead.

"Ten! We dropped at least ten, wouldn't you say?"

The Elf officer offered a thin smile in response, muttering under his breath, 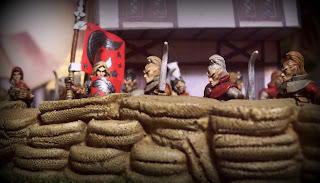 Seeing that his Orc warriors were almost in a position to begin the assault on Orc's Drift, F'yar brought his Wyvern down to land alongside them. Brandishing his bloodied lance, the King looked down expecting to see his subjects gazing back up in awe and adoration. 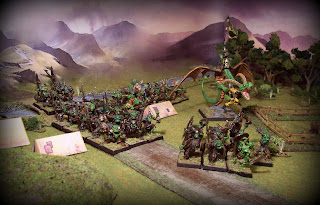 Instead a sea of hostile faces glared back at him, foremost of them his old rival, Magyar Ironfist. Before he knew what was happening, a hail of arrows rained down on him - from behind. Although the missiles clattered harmlessly to the floor, the damage had certainly been done. Numbed to the core, F'yar struggled to comprehend what had just happened. The treacherous dogs had turned on him!
With a scream of rage and hatred, Magyar spoke out, 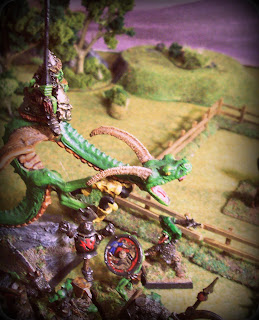 "So F'yar, so-called King, skulker in the shadows and backstabber of the womanish Half Elf King, here we are. You have cast your last slur at me. Now it is my turn.

Your deeds are seen for what they are - a coward's work. You sit there, up on the back of your stinking lizard, lording it over those you deserted at Col Fields.

It is my time now. I, Magyar Ironfist, Crusher of the North, claim the throne. 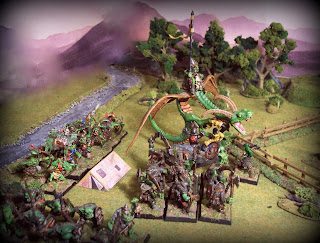 And with that the Kwae Karr tribe surged forward en masse, desperately slashing and hacking at the Wyvern. Taken by surprise, and already weakened by the bowfire of the Elves, the great beast stood little chance. Disemboweling one of it attackers with a swipe of its talons, the beast's dying cries were almost muffled by the other victim it had been in the process of swallowing.

Leaping atop the still writhing corpse of the Wyvern, Magyar brought down his spiked mace in a great ringing blow on F'yars helm. Dazed and blinded by the blood that now oozed down into his eyes, the beleagured king failed to strike back at the pretender.

Magyar stepped back from the wounded F'yar and glared at his shaman, who was of course fiddling with his groin once more.

Bagrash looked up unhappily - Preparation H had also failed to salve the itching between his legs, and what was that shouting all about?

"Baaggraashhh - now or I'll have your head as well!"

The shaman suddenly remembered the plan. Pointing his finger at his erstwhile master, Bagrash muttered the words of power and there was a blinding flash... 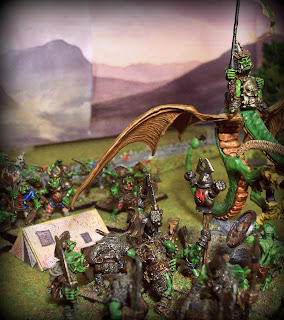 All that was left of the once mighty King was a blackened mark where he had fallen. The shaman's sorcerous flames had done their work.

Magyar stepped forward and surveyed the sea of green faces around him.

"Look on your so-called King you dogs. Where there was once F'yar, there is now only smoke. I claim the throne unless there is any that would oppose me..."

A sudden outbreak of coughing and shuffling of feet affirmed that Magyar indeed stood unopposed.