Osrim scowled into his stew ration with renewed testiness. It wasn't that the dish lacked meat or flavour - he'd given up hoping for either soon after he had volunteered his service to the Grand League's Engineering Corps.

It was that... Elf. Even thinking about that word made his fists itch. Osrim stabbed viciously at a hapless lump of turnip. Mudpies he had sneered, do carry on with your mudpies... It was enough to make a Dwarf do half a job out of spite. Almost.

The bridge had been pretty much the only thing keeping his little unit of sappers together. Ill feeling was running high at missing out on the action going on over at Ortar. All the lads wanted to do was crack a few Goblin skulls and yet here they were playing at... mudpies. 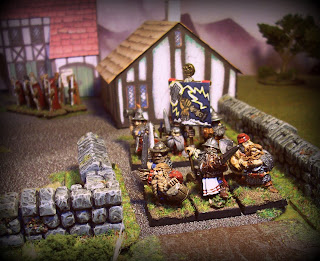 The rest of those pointy-eared fops weren't helping either. As if there leader Broomhead, or whatever he was called wasn't bad enough. Osrim was feeling less and less inclined to talk his Dwarfs down from adding some of those pointy ears to their trophy collections on the now regular occasions when a spat had developed - incited of course by those arrogant little...

Then came a sound he hadn't expected. A clear and shrilly declaimed note sounding out from the peaks that towered above them. A note which shook him to his senses and put his worries and grudges firmly into perspective. A note that made him the only obstacle between the enemy and their ultimate goal - the capital, Palesandre.


Brommedir paced back down the line again, casting a stern eye over the Elves who stood stiffly to attention before him.

"Very good, very good. Spick and span as it should be." 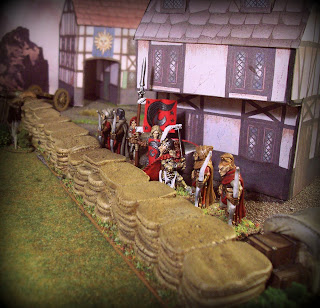 Then again, was everything as it should be? A frown threatened to crease Brommedir's flawless brow. It had seemed like the perfect command at first - Guarding the supply lines to the front at Ortar would give him and his unit plenty of time to do what they did best; polishing their armour, oiling their bows and showing off their fine looks in regular military reviews.

There were, however, several flies in the ointment. That Dwarf who was in charge of the bridge - he hadn't caught his name as the damned fellow had been mumbling as usual. That Dwarf had been acting very suspiciously and Brommedir was becoming increasingly concerned over the safety of the Army paychest that had been put into his care. 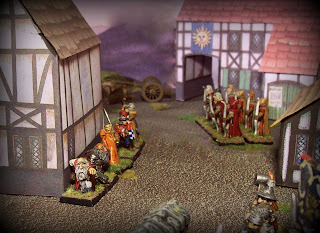 The Druid hadn't made a good impression on him either - even less so when he wnadered past, drunk as usual, and made jibes at his fine Elven bowmen as they stood ready for inspection. Toy soldiers indeed! No, that glassy eyed stare and nervous energy that seemed to permanently animate Snart certainly unnerved Brommedir.

As if all that wasn't enough, he now had rank insubordination in his own ranks, as he turned and saw a ripple of movement flow down his beautifully straight ranks. This was intolerable - he couldn't have his once proud looking bowmen looking about them, shuffling their feet nervously and generaly fidgeting in a most unprofessional manner.

Brommedir began a severe reprimand but was caught short by his junior officer - the one who always seemed to shout at him in an incredibly rude manner.

"SIR, SIR. ITS THE ALARM BELL. ORCS SPOTTED ACROSS THE RIVER!"

Elves began moving to defensive positions and Brommedir, never one to be outdone, offered a rather strangled sounding...

"Thats it men, to your stations. Very good, very good."

Brommedir also noticed with satisfaction that the Dwarfs were busying themselves with makeshift barricades using grain sacks, furniture and whatever else came to hand.  He just hoped that they were selecting only the cleanest sacks to be filled and put onto the barricade, if he was going to be defending it.

At least the thought momentarily kept his mind off the fact that they were, as he too now realised, the last line of defence between the approaching Orcs and the capital city, Palesandre... 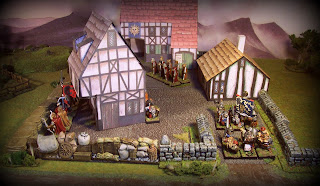