Cries went up and down both the Orc and Alliance lines as the news spread rapidly - reinforcements had arrived... Elf, human and dwarf alike tightened their grip on their weapons as the grim truth dawned on them. The first wave of greenskins whose advance they had checked had only been an advance force. Now the Orcs' numbers were more than doubled as a mob each of warriors and Big 'uns spilled onto the field of battle.

Swooping low and letting out a piercing shriek a great War Wyvern cast its baleful eyes about in search of prey.

Adding to the Alliance's woes, a troupe of foul ogres emerged onto the road, outflanking their line and threatening the Dwarf crossbows.

Behind them lurked a rare sight - an ogre shaman, rattling his bones and adding his guttural voice to the gleeful howls of the chaotic horde. Over on the far left hobhounds bounded down from the screes, their hobgoblin masters scrambling to keep up. 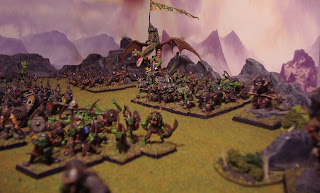 The epic struggle between the Spike Can Commandoes and the Dwarf Clansmen rumbled on in the centre. A dwarf met his end, felled by a rusted halberd as another was hacked down by Ruglud's frenzied attacks. The Dwarfs fought back killing an Orc trooper. Gudruk and Grimbrow also continued to slug it out - however, it was to be Gudruk who gained the upper hand this time. His heavy blade finding a chink in the Dwarf's armour, leaving him wounded but determined to battle on.
Cracksnatcha was beginning to enjoy himself as another three berserkers fell by his hand - their wild attacks rebounding harmlessly off his enchanted shield!
The Orcs were once more hard pressed by the Wardancers' deadly dance of death - one more fell and more than a few had good cause to be thankful that their armour held up! Such was the Elves' agility that they easily eluded the Orcs' clumsy attacks.
However, the Orcs now had momentum and the Alliance units found themselves pushed backwards by the bristling Orc ranks! 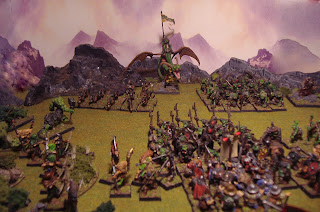 Warriors on both sides instinctively flinched as the terrible shadow of the Wyvern flitted over them, continuing its low swoop over the carnage. The earth shook as the winged terror descended on the horrified militia, who ineffectually raised their halberds with shaking hands to fend it off. 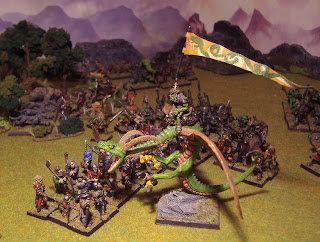 A dull light of comprehension crept into the Troll's beady eyes as it slowly remembered where it was. Shaking away the last traces of the stupor that had clouded its simple mind, it gave a mighty bellow and loped towards the Dwarf crossbowmen before it. The doughty Dwarfs held their composure enough to stand and fire and two of their deadly bolts sank into the Troll bearing down on them. Shrieking with pain and rage the foul brute savagley mauled two of the brave warriors - shocked by the ferocity of the assault the Dwarfs failed to finish the stricken monster off. Stepping back over their fallen comrades, they were forced back into the cloud of pestilent vapour... Yet this time the Troll's wounds failed to heal over - the Dwarf's only consolation! 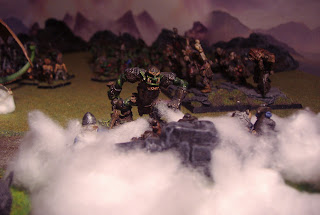 Back in the centre of the battlefield a ruckus was developing! Seeing that they were in danger of being forced into the bloody fighting ahead of them the Orc archers attempted a reverse wheel in order to leave a gap for the unit of Big'uns to charge through. All was going well until the burly orcs behind them, in a fit of good old fashioned animosity, began jeering and calling the archers' appetite for fighting into question. The result was total gridlock as curses and profanities that couldn't possibly be repeated here coloured the air between the two units - a full scale brawl was only avoided by the shaman, Coppafeel's threats and cries! 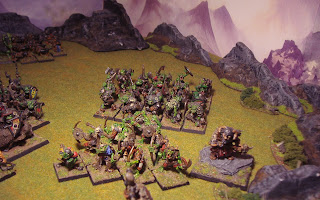 The scent of their feline enemies drove the newly arrived Hobhounds on and they set upon the Wildcats and the Zoat, baying wildly. 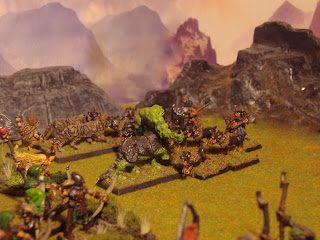 Raphellicus' scaly hide easily turned the hounds snapping jaws and he dispatched one of the snarling beasts. 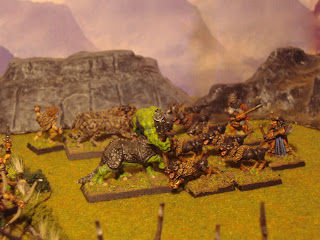 A great cacophony of howls and hisses rose up as the wildcats joined battle, fighting like cats and dogs - quite literally! One feline was brought to the ground and savaged but not before three of the savage dogs had met their bloody end. Amid whimpers and growls the hobgoblins steadied the pack but were pushed back. 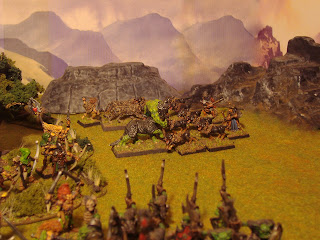 The Ogres shambled forward now the Troll had moved from their way. Taking no notice of Breward's bog they waded forward, itching to get to grips with the enemy... 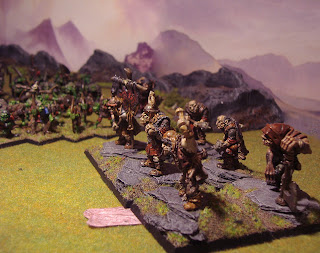 With their ears ringing with the Wyvern's dread cry the militia broke and ran. Hopping forward like some nightmare vulture the huge reptile's sinuous neck darted with horrible speed, snapping and lunging at the fleeing men. Three broken bodies were left in its wake. Dragbod Longdong, the only orc mad enough to go anywhere near the beast, joined in the carnage from his saddle, stabbing out with his lance and bringing down three more of the helpless soldiers. Unable to stop the Wyvern's rampage, even if he had wanted to, Longdong held on tight as they continued to pursue the survivors. Panic rippled out along the Grand League's lines but they held fast. All except the Bergjaeger - watching many of their friends and compatriots torn asunder was too much for their resolve and they broke and ran... 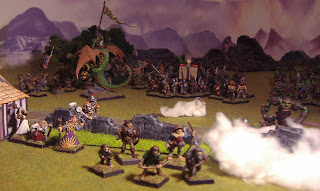 As the tide began to turn Dravid Coppafeel cackled maniacally as he whispered the insidious words that would enfeeble and weaken the stubborn Dwarf clansmen who stood in the way of the Orcs' rampage.
Not far away Abraka Dabrar, the ogre shaman, grunted with satisfaction, strength and dexterity coursing through his body, as he muttered the incantations to grant himself strength of combat.
Alliance Turn 3
Things were not looking good for the Grand League - the arrival of the main Orc force had turned the tables somewhat, the men of Ortar had all but fled and a Wyvern was rampaging in their midst!
Yet despair had not set in everywhere. Mellthathar, the courageous Elf General, bravely dashed out to halt the Wyvern's trail of destruction! 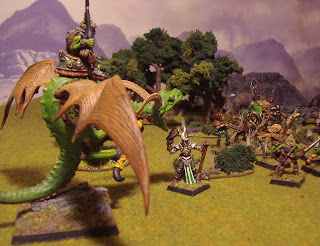 The bear and warhounds were shepherded through the wood to meet the new threat of the Hobhounds and Big'uns. 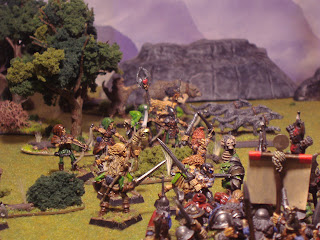 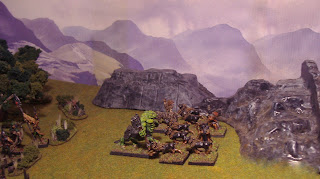 Meanwhile as the tactical situation deteriorated around them, the Dwarf sappers hurriedly began preparing their defences... 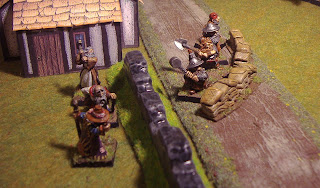 Pennan Tellur made a sharp gesture and his animated sword checked its headlong progress toward the Orc shaman, Coppafeel's throat. Banking to the right the enchanted blade now flew at Golgfag, leader of the band of ogres who now threatened the Alliances right flank. 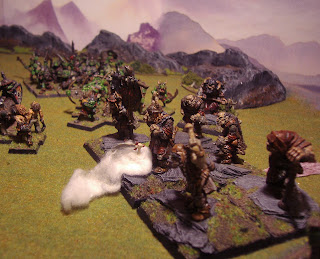 The Gladerunners now finally had a viable target in front of them. Letting fly a graceful volley they smiled grimly as three Orc Big'uns fell - never to despoil their fair lands again. 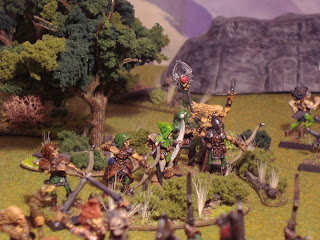 Raphellicus and the Wildcat Beastmaster kept up their attack on the Hobhounds - two more fell with a pathetic whine. 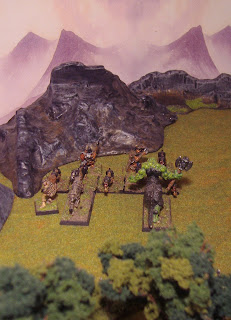 The Hobgoblins strained to keep the pack together as they were pushed back again. 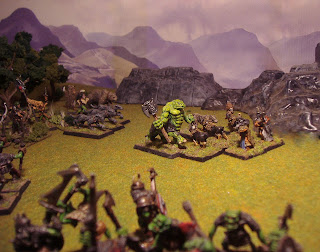 The Dwarf crossbowmen, taking heart in the plight of the wounded Troll, fought back. Desperate to escape the cloud of foul air, they cut down their equally foul opponent! 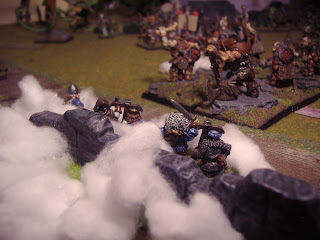 The Wardancers tirelessly leapt and danced their whirling death leaving three more Orcs in bloody ruin - yet in the maelstrom one Elf's stride was cut short by a well aimed blow. The Norsemen continued to be cut down by the Orc General's Frenzied blade despite their wild attacks - the loss of three of his companinons barely registered as the sole survivor fought on! The Clansmen fought heroically but were unable to wound their foes. They gnashed their teeth as the Orc champion felled another of their number. Grimbrow and Gudruk exchanged blows again but their great swords weighed heavy in their hands now - neither was able  to finish their bloodied opponent off.
The Dwarfs grudgingly gave ground as the howling mass of Orcs pressed against them... 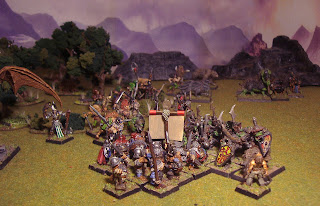 Throwing himself up in a great leap with typical Elven agility, Mellthathar swung his finely wrought axe in a great arc - the elven steel glanced off the Wyvern's scaly sides but the Elf skilfully channelled the energy into a deadly strike at Longdong. The magical Bane blade bit deep and for a moment the Wyvern rider remained atop his terrible mount, before tumbling, headless, to the ground.
Unencumbered by its master the Wyvern squawked in confusion. Flapping its leathery wings it took to the skies shrieking fitfully. 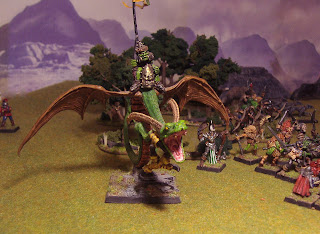 Golgfag growled with distaste at his magical enemy. The blade strook well and true but failed to pierce the colossuss' thick hide. The ogres advance had been checked however, but how long could Tellur keep up the enchantment... 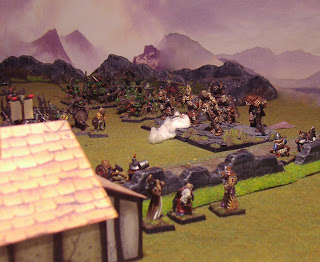 Refreshed from the long draught he had taken from his bottle, Breward the Druid waved his arms, drawing the poison cloud that assaulted the Dwarf crossbowmen's lungs into the air and dissipating it harmlessly away. Gaspar the Dwarf enchanter added his magic to the attacks on the Ogres - an assault of stone erupted against them, pulverising one of the brutes but failing to break their resolve. Grimacing at the effort, Pennan Tellur sustained his animated sword and called forth a great pool of quicksand under the Ogres' very feet! Two more troopers were pulled to a suffocating death beneath the hungry sand but again the monsters refused to panic.

﻿
Can the embattled Alliance lines stand up to this second wave of attacks? Will the Orc archers and Big'uns settle their differences? And just where has that Wyvern got to?
Stayed tuned for the next unmissable episode - Turn 4!!
Posted by Thantsants at 12:23