Orc Turn 4
Coppafeel snarled - he felt something was wrong - something to do with that accursed elf witch...
Sure enough his suspicions were confirmed as a wave of Universal Confusion emanated from her staff, enveloping the whole battlefield. Fighters on both sides paused momentarily, shaking their heads as their senses were dulled by the sylvan magic. This fog of befuddlement would mean that both sides would find it difficult to hit their targets or even move in a decisive way...
The Big'uns forgetting the reason for their confrontation with the archers ambled off to the right, vaguely in the direction of the enemy. Wandering forwards the archers tried to draw a bead on the sappers scurrying about behind their fortifications. Yet their simple minds were not sufficient to overcome the enchantment, let alone move and target the dwarfs behind their wall. 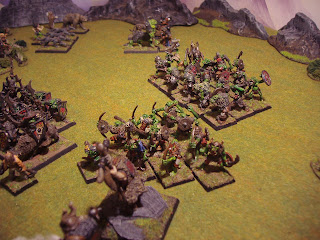 The hobhounds at least had their mind made up for them - fight or die, as Raphellicus the Zoat continued to bear down on them. Even their animal minds were dulled by the magic and they failed to sink their teeth into the Zoat or the wildcat. However, the Elven beastmaster fighting beside his charge was not so fortunate - brought down by a clumsy lunge. Raphellicus managed to retain enough presence of mind to avenge his death by slaying another slavering hound. Luckily for them the Hobgoblins were too dazed to think about routing! 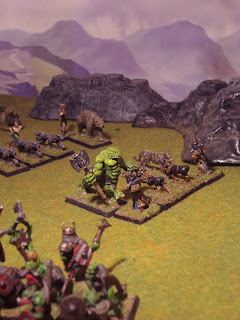 Over on the right, Abraka Dabrar, the ogre shaman, attempted to engage the Dwarf crossbowmen before him.
Forgetting what he was doing midway through his headlong charge he stopped short - perilously close to what might become his firing squad... 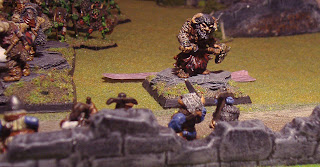 Still shrieking horribly the Wyvern circled and wheeled unable to focus on its next course of action. Until that is, its slow reptilian brain began to remember it had not been fed in a week! Looking down it saw the Elf general who had just slain its rider - motivated more by hunger than revenge the great beast plummeted towards its quarry.
Its reactions slowed by the sorcery at work, it snapped ineffectually at the lithe Elf. With uncharacteristic clumsiness Melthathar only landed one blow - only to see it bounce harmlessly off the scaly flanks of the monster. 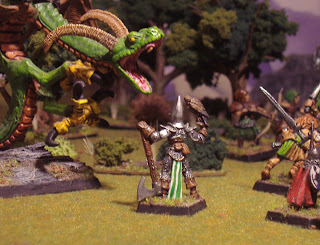 Despite the confusion some things always loom large in the Orcish brain - fighting! Another Wardancer found himself impaled on the barbed blade of an Orc halberd. The Elves again were frustrated by the greenskins' heavy armour - their attacks finding no purchase. 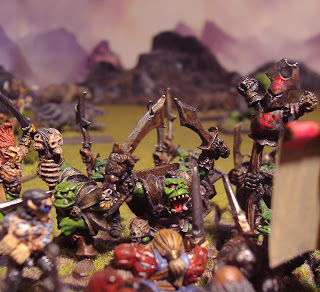 Grimbrow looked on uncomprehendingly as again Gudruk's blade spilled his blood. Sorely wounded but grimly determined the Dwarf steeled himself for another round as his attack was turned by the Orc Leader's armour plate. 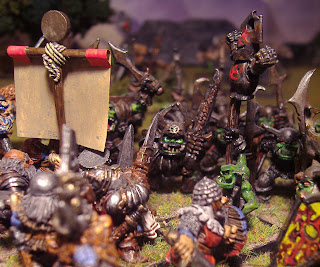 The Big'uns just about made their minds up to continue their dazed amble across the field during the reserve phase - blissfully unaware of the Elf bows swinging their way... 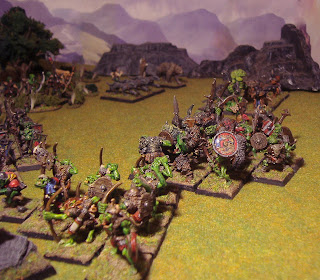 Abraka grunted as he drew together what small mental reserves he had in order to hurl a fireball at the Dwarf crossbowmen. The flaming missile struck three of the Dwarfs but only succeeded in singeing their beards - much to their chagrin! 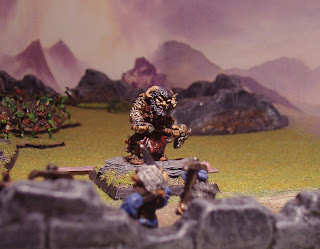 Dravid Coppafeel let out a peal of derisive laughter at such a pathetic show of force. His eyes glowed and the nearby archers felt the powerful charge in the air as the shaman launched a devastating series of lightning bolts against the already smoking dwarfs. All that remained were their boots - still smoking!


As Paldaniel's spell wore off full consiousness began to seep back across the field of battle. Hurriedly the sappers moved down their stockade - one team adding another two sections, whilst the other leapfrogged past them in order to be in position to continue the construction.

Grimbrow, aware of the plight of his men and the relative safety of the barricade the sappers had thrown up, shouted across to the Wardancers. Their continued attacks could just buy enough time for the Dwarfs to retreat and regroup at the strongpoint. Happy to continue their rampage the Elves fought on as the Clansmen rushed back, stopping just short of safety. 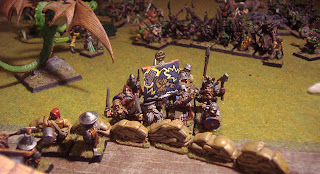 Another Orc trooper fell to their whirling blades and grim smiles painted the faces of the Elves as they found themselves pushed back closer to the sanctuary of the woods...
The lone Norse berserker was of course completely oblivious to the change in the situation. Nor did he feel Crackscratcha's blade as it tore through his chest! 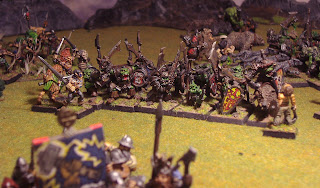 Meanwhile, the bear and hound teams finally got into action, charging into the mob of Big'uns threatening the Elven line. 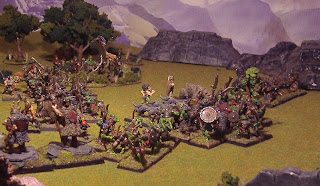 Switching their attention to the archers, the Gladerunners dispatched another two Orcs with their accurate bow fire. 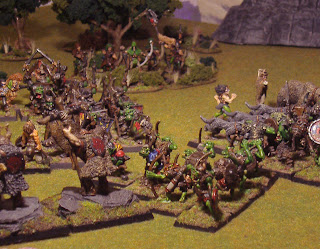 The wildcat, enraged by the loss of its master, lashed out in fury - first killing the hound it faced and then, in turn, its master. The inscrutable Zoat also crushed the slavering Hobhound snapping at his ankles, but the Hobgoblin handler had a lucky escape. Its resolve finally crumbling, the foul creature turned and ran for the hills, swiftly pursued by the spitting wildcat. Raphellicus, knowing his strength would be needed again before the day was out, exercised a little more restraint. 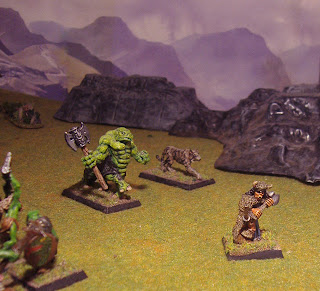 Steadying themselves at the terrifying sight of the bear that was bearing down on them, the Big'uns braced themselves for the impact. One burly Orc was brought down by the huge animal, while another was savaged by one of the hounds. In response Wottar Woppah, the Big'un champion, slew two of the fine Elven hounds. Not hugely dissimilar in size and almost a match for it, another warrior opened up a cruel wound down the great bear's flank.
Unable to sustain their assault the animal handlers and their beasts fell back in some consternation. 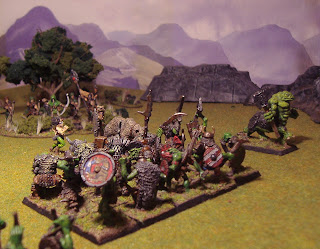 The titanic struggle between Melthathar and the Wyvern raged on. Sunlight flashed off Mithril plate and scaly hide as the two adversaries vied for the upper hand. Melthathars finely wrought axe bit deep into soft flesh as it parted the Wyvern's iron-like scales. Bringing the singing blade back in a deft side swipe the Elf tore a ragged gash across the vile wyrm's underbelly.
Now, even more deadly in its agony the wounded Wyvern smashed the Elf general back with a great sweep of its leathery wing. Standing over its prey, its fetid breath assaulting his nostrils, the cruel beast raked its claws across Melthathars chest, gravely wounding him. Rolling out from under its deadly grasp the battered Elf turned to face his grisly opponent once more - the combat was a stalemate with two wounds a-piece. 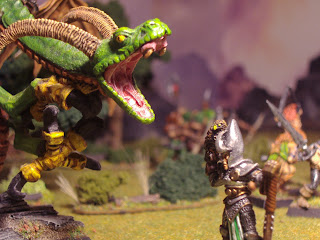 Taking advantage of the clamour and chaos of the battle, the Gladerunners moved swiftly to position themselves for a charge against the Big'uns, ready to sell their lives dearly in support of their kin. The Zoat too shifted his huge bulk to threaten the Orcs' undefended flank... 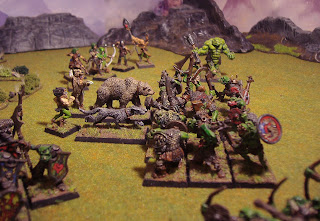 Swearing that he'd never say a bad word about an Elf again, Grimbrow led his men over the stockade and reformed his small regiment - making ready for the oncoming storm. 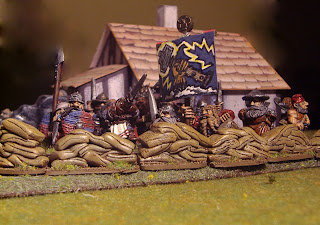 Finally Breward's bog, that had impeded the Orcish hordes advance so much, dried up. The Druid began to mutter more arcane words once more, only slightly slurring his voice! A shout went up - aid has arrived! The Druid smiled to himself - if the illusion of a legendary hero had fooled his own side, it should have the desired effect on the Orcs... 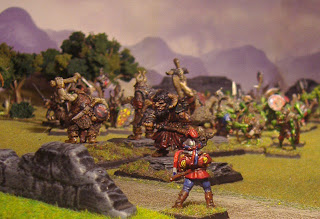 Gasper the Wise once more began the incantations necessary to hurl another assault of stone at the Ogres, but this time his mental stamina was low and the spell fizzled out in a rather unspectacular way!
Pennan Tellur, on the other hand, hurled a series of lightning bolts at the hateful monstrosities. No fewer than five deadly bolts hit home but only one ogre suffered any damage. The same could not be said for its companion as it was dragged beneath the quick sand which still lapped hungrily at their feet. Tellur's animated sword had done its work in halting their advance and blocking their path - that is until Golgfag, tired of the annoying little trinket, smashed it to the ground - breaking the spell. 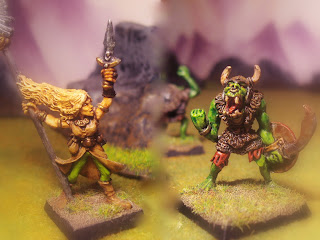 Paldaniel, horrified at the Dwarf crossbowmen's fate at the hands of the vile Coppafell, vowed to put an end to the threat. Her eyes rolled back, leaving blank orbs in their place as she sent forth her mind, seeking out the foul Orc shaman. A mental duel was engaged and their consciousnesses reeled from the shock of combat, until, with a cry, the Elf Sorceress slumped back, fended off by the Shaman's power.
Can the Orcs press home their attack? Will Golgfag and what's left of his Ogres get their revenge? Will Grimbrow ever look anyone in the eye again having run away from mere Orcs?
Stay tuned for what could be(!) the final installment for this epic struggle...
Posted by Thantsants at 17:47