A slight diversion from Orc's Drift - well not really as I'll need every orc I own to make up the invasion force!

I've had these minis a long, long time and they've been primed ready for painting for a long, long time too! Finally got around to making a start - rightly or wrongly I'm going to paint them 4 or 5 at a time to make it more manageable, leaving the command group till last as a treat!

I think it was the idea of 20 odd freehand shields that has been putting me off (I have a cunning plan to avoid this with Harboth's Orc Archers... more later!). However, I quite enjoyed looking up old chaos imagery and it wasn't as bad as envisioned... Just need a load of the original crossbows as I've lost all but 4 of mine! 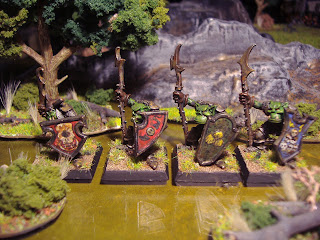 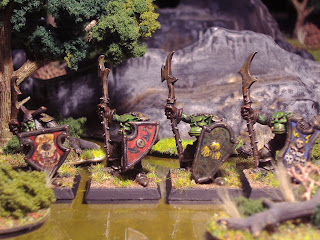 Back in the good old days GW printed some great back stories about the regiments featured in the boxed regiments of Renown sets - Here's how the Ruglud's Armoured Orcs, the Spike-Can Commandos, were formed...

The Crooked Eye Orcs had travelled many miles westward to the Old World, suffering the sniping of mountain Goblins, incessant rain, and the endless whining of Bambrag, their incontinent shaman.


Once, they skirted a ruined Dwarfhold. Fear of spirits kept them from sheltering inside, but, a single Orc Hero named Ruglud had dared to enter. He returned unharmed, but had not spoken since, and stated blankly into space.
The Orcs huddled in the rain before a rough stone wall across a narrow pass, while Chief Gudruk Bonechewer yelled at a figure on the battlements. 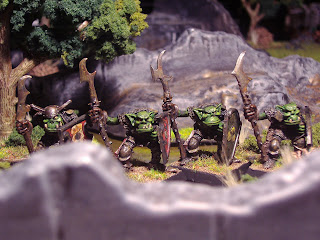 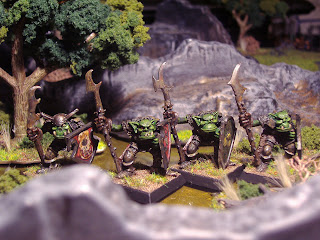 Gudruk returned to the tribe, dodging the hall of stones and garbage that accompanied this witty riposte.

'Lissen,' he said. 'Them kak-'ead Gobboes reckon the Chaos boys took ev'ryfink over. They ain't comin' out an' they ain't lettin' nuffink through. They got bows an' rocks an' spears an' stuff - if we was to try and get 'em, they'd crump us to bits.' He thought for a while.

'We needs volunteers', he announced at length. His warriors developed a sudden and compelling interest in the ground at their feet. 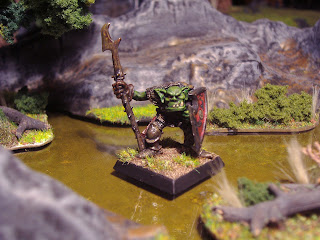 'Or armour', whined Bambrag, 'Couldn't touch us if we 'ad cans like real Chaos boys.' 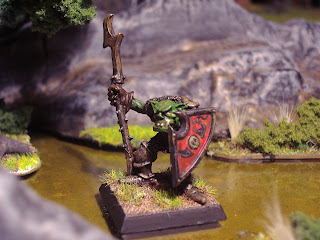 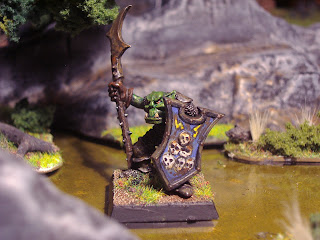 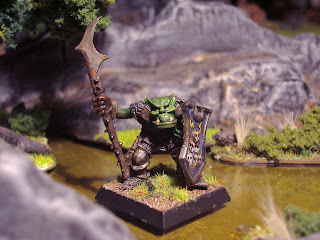 It was Ruglud who spoke. Gudruk gave him a good shake to speed the recovery of his senses, and he continued dreamily. 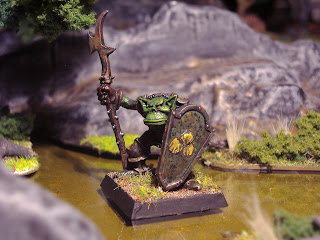 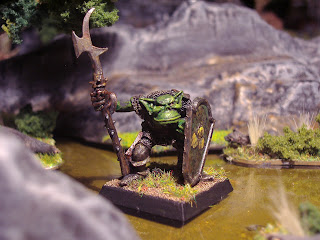 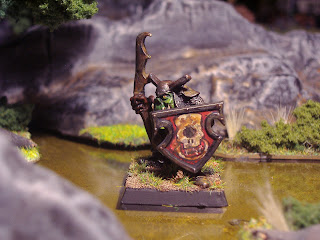 A swift expedition returned to the Dwarfhold. The ill-fitting plates were roughly hammered into shape and held together with whatever came to hand. By nightfall, a small unit of armoured warriors was ready. 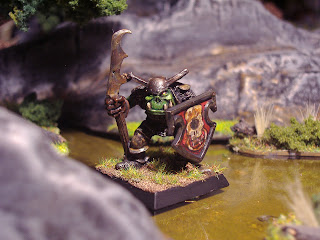 As the gear's discoverer and the bravest, meanest and certainly the most stupid Orc, Ruglud was made leader, At Gudruk's suggestion, Bambrag became the regimental musician on the Xylobone, a traditional Orcish instrument, and Maggot - Gudruk's youngest and most irritating whelp - joined the ranks as standard-bearer.

The tribe feasted upon Goblin-flesh long into the night - all except for Ruglud, who couldn't get his helmet off, and was reduced to sucking broth through a straw.

BATTLECRY The most frequent battlecry is a repetitive chant of 'Gobbo fer tea, Gobbo fer tea, Gobbo, Gobbo, Gobbo fer tea!', with 'Stunty', "Uman' and so on being substituted for 'Gobbo' as appropriate.
DEEDS The Commandos' first victory led to many more as they pushed across the Worlds' Mountains towards the old World. Most of these were over isolated Goblin strongholds, and are remembered only in the stories and drinking songs of the Crooked Eye Orcs - and then in versions which are probably wildly exaggerated. one confirmed exploit was the storming of Karak-Bazik, an outlier to the great Dwarven settlement of Zhufbar, when the Dwarfs were obliged to abandon the Dwarfhold and cave in a series of connecting tunnels to cover their retreat.

UNIFORMS There is no uniform as such; the commandoes are dressed in a wide and miscellaneous range of armour.

SHIELDS The Commandos never bothered to re-paint their shields to a standard design, so this varies widely.
Posted by Thantsants at 02:15