Aren't You A Little Pointy Headed For A Stormtrooper?

Wow! You thought my Tyranids were a blast from the past all the way back from 2017... That's nothing - get ready to party like it's 2016 'cos that's when this lot were painted! 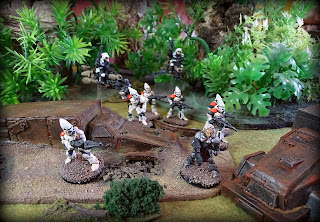 I don't often take the time to go back and reread stuff on my blog, other than to track down photos I've lost thanks to various changes in laptops and being terrible at backing stuff up. I was very glad I did in this case! 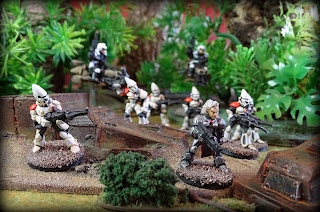 I was initially trying to work out when I had originally painted these Eldar and what had possessed me to try and make them look a bit like Darth Vader's finest.
Well I got my answer in this old battle report I wrote back in March of 2016 - Escape From the Evil Empire. This was one of many very enjoyable games played with the M1 Marauders, which were more often than not played at the lovely home (and excellent games room) of Nik Dixon - thanks to his generosity as a host and the convenience of his geographical location! 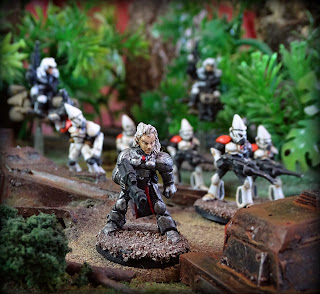 The M1 Marauders were (well still are - I've just unfortunately put another two major A roads between me and the rest of them since moving to Cumbria!) a great little gaming group of like-minded fellows living up and down the M1 roughly between York and Doncaster that I think Warlord Paul set up (or at least did the majority of organising and gm'ing for). It wasn't exclusively Oldhammer but certainly most of the games I played with them were. 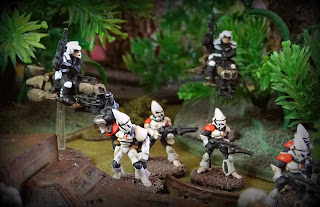 This particular game was another of Paul's well thought out scenarios and includes some excellent Amera terrain of his (the starport and Imperial Fortress) and a very nice converted Millenium Falcon (the Eon Kite) which I believe was a Micro Machines playset in a former life! This game was also one of the most entertaining games of Rogue Trader I've ever played. Have a read and you'll see why - none of the action has been embellished by me at all! 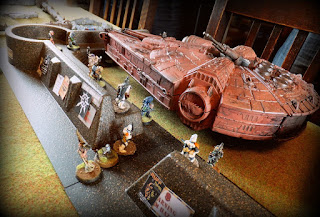 So I guess Paul's Eon Kite must have seeded the idea of getting a bit of Star Wars/Games Workshop cross-over going on, as did the scenario which involved a rebellious Planetary Governor attempting to flee Imperial justice and various other more local threats - the title of the battle report works on several layers - see what I did there! The Eldar Guardians lend themselves quite well to standing in as Storm Troopers and Gasma herself was a small conversion of a female Guardian with Space Marine arms (still need to track down some more of those plastic Guardian arms...) and a converted lasgun to look like an E-11 blaster. I guess The Force Awakens must have recently come out too! 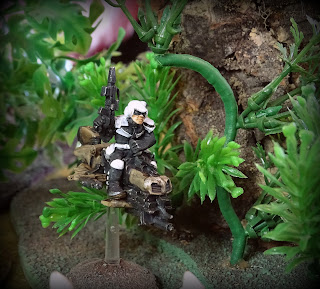 I also happened to have a couple of these MK 14 Imperial Army Bullock Jet Cycles knocking about in my collection and couldn't resist painting them up as Scout Troopers on Aratech 74-Z Speeder Bikes - hence the slightly odd mix of troops I ended up fielding. 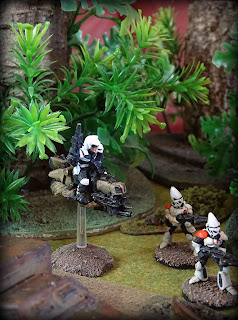 Despite the fine old Rogue Trader tradition of pretty much anything goes, I'm not entirely convinced they gel terribly well as a force, although I'd imagine you could explain away the difference in gear by pointing out that those pointy helmets wouldn't be the most practical to wear whilst piloting a jet cycle. They must also have been some of my first attempts at painting a mostly white miniature - my skills have moved on a bit since then I like to think! For these reasons I was beginning to consider repainting both the Guardians and the Jet Cycle riders to restore them to their traditional allegiances - but then I reread the battle report. 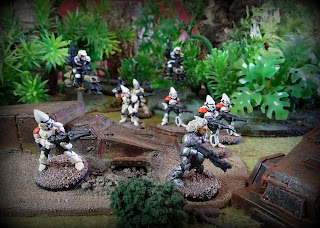 I hope it doesn't sound too big-headed when I say it literally made me laugh out loud - it wasn't my attempts at humorous writing that had me chuckling. I'd forgotten a lot of the details of what went on in the game and it all came flooding back as I read - the crazy things that had to be gm'ed because they transcended all the rules (a typical Steve Casey special - those of you who've gamed with him will know what I mean!), the daft pun names we'd come up with for our various characters and flunkeys, the miriad of 80's films we'd ripped off or riffed and the way it all somehow knitted together in to a very funny narrative - well at least in my mind! 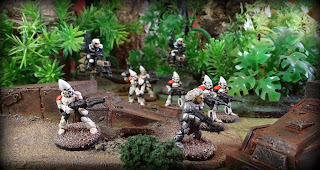 So safe to say, Gasma's squad has been spared the trash compactor and hopefully they'll see action again some time and in some other wretched hive of scum and villainy!
Posted by Thantsants at 02:17