Orktober: Givin' my Wagon a Fixin'

So the last of the Runts have been fished out of the engine cowling, the Grots have used up the last of the paint squigs and famed Mekaniak, Nazzkar Kabrettah has hung up his oily rags.

I'm finally done with painting this behemoth of a Battle Wagon! 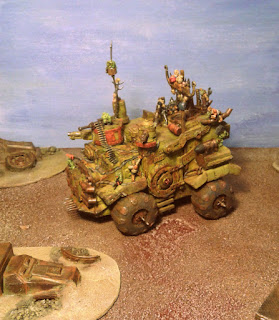 It's been a steep learning curve in working with resin and trying out various weathering techniques but I reckon I'm done. One big thing to take away from this build is not to get too carried away and stick loads of stuff on in one go. The Grots and Runts clinging to the outside of the Wagon were a nightmare to paint! 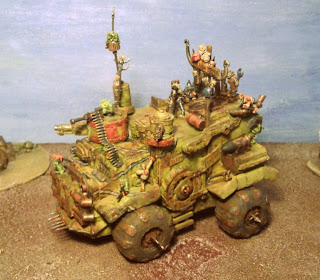 One thing I did enjoy about this project was adding the fiddly little details to give the model those comedic touches peculiar to Space Orks! 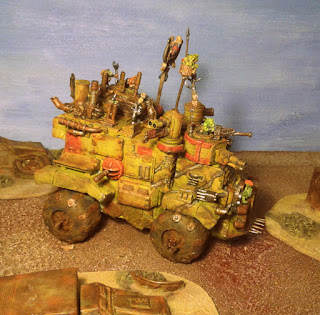 Krew members can rest assured that their safety is paramount - emergency exits can be cut wherever they are needed!

Looted Imperial munitions always come in handy - not sure whether as a crude turbo booster or recklessly dangerous weapon!

The Paul Bonner illustration I loosely based my wagon on looks to be from the Bad Moon Clan. I have the Space Ork Raiders set to paint next and wanted to go for a more generic look for my Boyz - not particularly associated with any clan in particular. 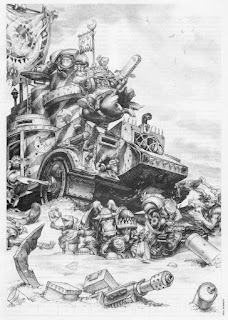 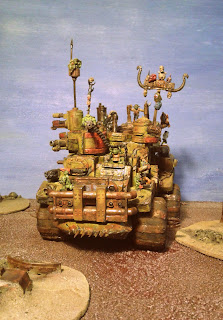 The idea of Freebooterz has always appealed and the models I've assembled so far fit quite nicely with a bunch of misfits and exiles from "normal" Orky society. My colour choices for the Wagon were influenced by this and the more Rogue Trader style of Space Orks before the advent of Waaagh the Orks and the 2nd edition 40K stuff - much as I love all that stuff as well!

That and I love the colour scheme of this old Red Sunz Gargant from the Codex Titanicus rule book! I had to include a few bits of red trim as well - everyone knows "red wunz go fasta!" 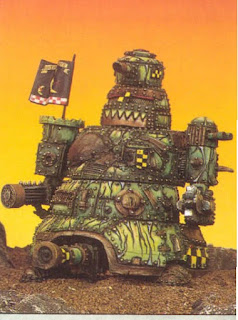 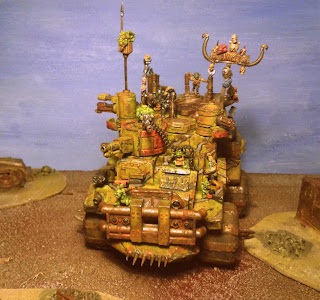 A War Buggy gunner fitted perfectly in the turret manning his big shoota - not sure his Snorkling assistant is too happy with his lot though! 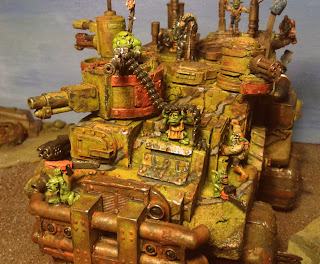 You might also have noticed the little Snotlings waving chainsaws around enthusiastically. I have Marcus from Wargames Foundry to thank for them. Thanks to our little game of Space Fleet at this year's BOYL, I was a little late leaving and Marcus very kindly showed us some John Pickford sculpts they had found and had been casting up during the weekend. Even more generously, he insisted we take our pick from the box and these little beauties (along with some squigs and the demon discussed here on Ewal Klam's excellent blog) were just crying out to be taken home. Nice also to be able to echo the chainsaw wielding Orc who is repairing the Kannon in Paul Bonner's illustration! 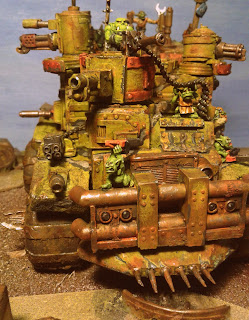 Every Ork prides himself on the trophies he wins on the field of battle and these chaps are no exception. No idea where the metal piece that makes up most of the trophy rack came from but I had fun referencing the Rogue Trader rule book for suitable Marine colour schemes. Looks like old Pedro Cantor has seen better days too... 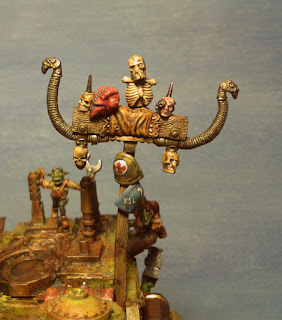 Foundry came up trumps again with this crow's nest filled with Snorklings - great little piece which I've kept detachable for use on the good ship Gilliam's Folly once I get back to finishing that off! 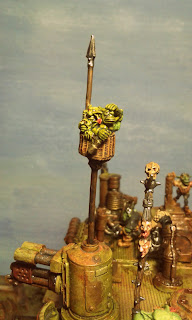 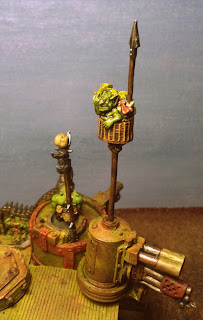 The back of the wagon is where the engine is housed and much of it sticks up through the roof in the form of a myriad of exhausts, air intakes and fuel injection systems. 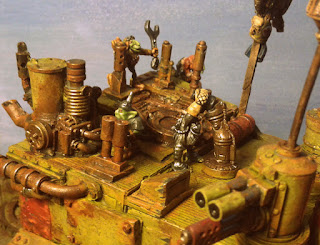 The Goblin crew Geoff sculpted for his airship, as detailed in my last post, fitted in perfectly as riggers! There's a GW grot lurking in there as well somewhere. 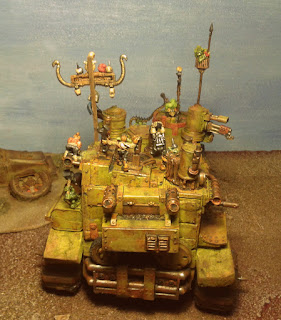 The chap in silver with the oven mitts sports the latest in fire retardant clothing - good job as he is in charge of keeping the engine well oiled. Not only is it a thirsty beast but flashbacks are not uncommon thanks to the volatility of the lubricants! Behind him is a cheery chap with more than a touch of Dick Van Dyke about him - Chim Chim Cheree anyone? 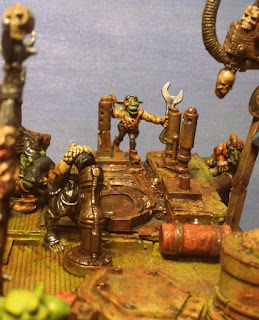 So all in all a tricky build and a fiddly paint job but I'm very happy how it's turned out. Just need a table big enough to accommodate it now! 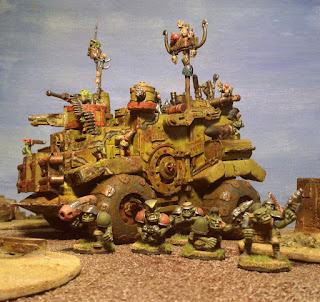