Ah 'tis that hallowed time of year once more where all things green of skin are celebrated - Orktober! This year I have been distracted from all my other projects (the resurrection of Rigg's Shrine for next year's BOYL being the big one!) by Space Orks.

Having been dragging my hobby heels since August, it took one of Darrin Stephen's friendly competitions on the Emporium of Rogue Dreams Facebook group to pull my finger out. Great to see him and Thomas Grove at this year's BOYL by the way - some of you may remember me facing off against Thomas in a remote game hosted by Dreamfish and written up by Gaj some years ago! 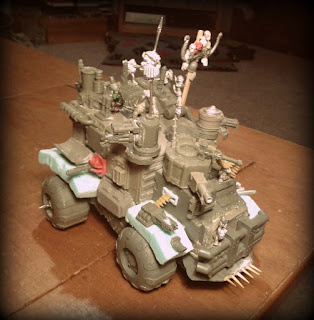 As luck would have it I happened to have a good selection of miscasts generously distributed for free by Curtis of Ramshackle Games (thanks very much Curtis!!) at the previous few BOYLs so I thought I'd have a shot at the best vehicle category. I've been slowly amassing a small mob of Boyz too so time permitting I may get some of them painted up later in the month too... 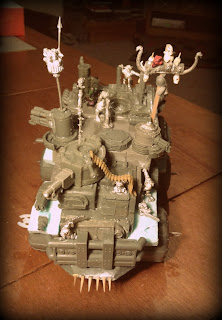 Being signed off work for a week with a nasty chest infection certainly has helped in the time department and a couple of days' frenzied sawing, drilling, hammering and gluing produced this behemoth! 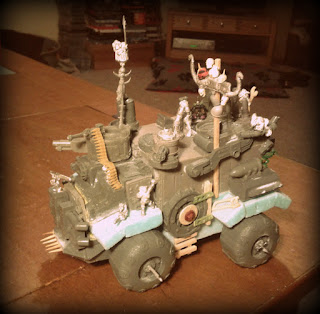 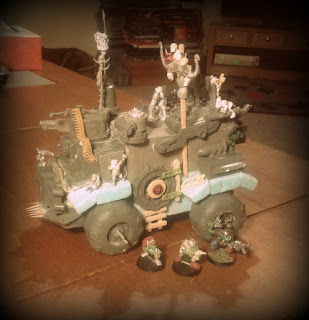 Thanks to a happy combination of bits I had lying around and sheer coincidence, I ended up loosely basing my wagon on this fantastic illustration by Paul Bonner - one of my faves! 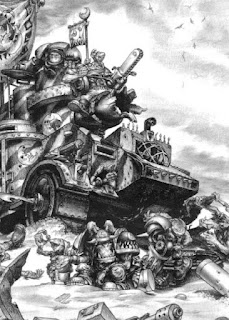 They're maybe a little hard to pick out amongst all the detritus I've festooned the model with but you may have noticed a few Gretchin riggers and crewmen. 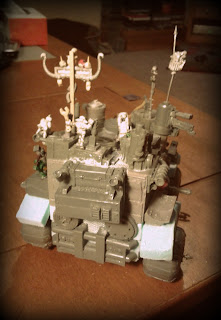 I should also thank Geoff of Oakbound Games who very generously cast up extra sets of the little fellas that he had sculpted himself to crew his amazing Zeppelin in the Warhammer Ahoy game that took place way back in BOYL 2015.


Geoff, ever the gentleman and scholar, gave sets away as prizes for "downing Zee Klindenbourg" during the game - not something I relished doing as it was a thing of rare beauty! 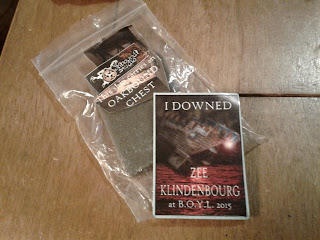 You can see better pics of the Goblin crewmen here on Geoff's blog  - I had been racking my brains for a use for them and they are just perfect as Battle Wagon Riggers - or will be once painted...

If you'll excuse me some blatant advertising, I can't really mention Geoff without telling you about the kickstarter he's recently launched. If you're in to post-apocalyptic skirmish gaming, 80's movies and comics then you'll like Factious Waste. There's just over two weeks to go and I'm sure he's appreciate your support!

Anyway, I'd best get back to the painting table - these wagons don't paint themselves!