Back to the Dwarven realms and the army of Bakraz Drakkenklad today. This time it's the heavy support that Dwarves do so well!

We've had some more details about the game itself - in case you've joined us late or I haven't explained what this rash of Dwarf posts are all about, myself and some of the M1 Marauders gaming group have been participating in a painting challenge leading up to a game of Warhammer Fantasy Battle 6th edition. The rules were as follows:

Between now and this game you may paint anything you like from the Ravening Hordes booklet (you must conform to the composition rules therein). For every point painted you may claim 10% of those points back to spend on magic items for use in the battle as a reward (you may not otherwise access magic items in the normal way). You may use all painted points as long as your total will not mean your team exceeds 25% of the enemy forces on the day and your force is legal according to RH (minor exceptions available on request). Units from the army books may be used with permission, post them up in the event for judgement, anyone may choose to accept or veto. Teams to be decided later depending on races chosen and painting speeds. 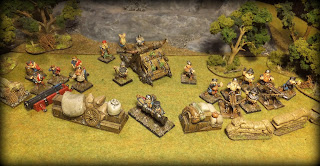 The background Warlord Paul has given us for the game is that our characters have all recently inherited property in the Albion county of Daggervale simultaneously! Of course our various factions then march in to Daggervale all set to repeat the mistakes of their ancestors... 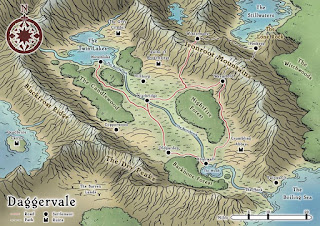 After a fun little game (via Facebook messages) of maneuvering the various armies around the map, battle has been met! The ever cunning Nik has managed to flank my pincer movement and we have a very interesting engagement to fight. My Dwarves have marched from their Hold in Ironkeep to besiege Paul's Undead who have dug in at Wintermore. Hopeful of destroying one of the evil armies in detail, Mark and Matt's Human armies have surrounded Nik and Richard's Goblinoid (and worse!) horde at Wyrmhold. However Mark's army is threatened in the rear by the other Mark's Chaos Dwarves who will be appearing in Turn 2!

So can the Dwarves break through the Undead fortifications and come to the aid of their Human allies? Well hopefully with some of this new kit I've just finished painting the task should be a little easier...

Dok Umanar, the oldest and most venerable bombardier of Bakraz Drakkenklad's household had long clung on to command of Gorm Grumbaki, the biggest cannon in the armoury, affectionately know as Old Grumbler and in no way a reflection on its cantakerous old master. The length of his beard meant that none opposed him though the shortness of his sight caused much dissension among the ranks of the younger engineers! 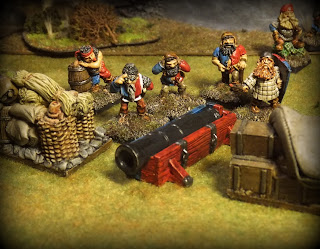 Luckily his crew have sharper eyes and a knack for not quite following Umanar's orders. Their hit rate however only serves to prolong their myopic leader's command... 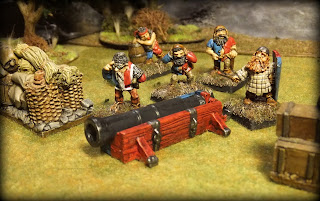 Goblobber needs no introduction but I will include the great little story that came on the back of the box!


A horde of howling, ripping green-skinned fiends was: bearing down upon beleagured Dwarfhold.
The catapult crew worked their machine frantically, raining rocks, down on the advancing hordes, but the advance seemed irresistible. Then true disaster struck. For a hundred yards around the catapuIt, there was not a rock to be seen - all had been prised out of the ground and fired at the approaching, Goblins.
Despite the enthusiastic offers of young Gorm Foambeard to be fired instead of a rock, the situation looked hopeless. Then Gottri Flatnose had an idea.
Before anyone could stop him. Gottri had picked up one of the large mallets used to fire the catapult. and was running towards the advancing Goblins. A group of three or four Goblins had left their felIows behind, and Gottri felled two in as many blows of the mallet. By the time the others caught up, only one Goblin remained to be quelled with a swift kick to the lower body.
"Quick!" roared Gottri, "Truss 'em, up before they come round! Here's our ammunition. The insensible Goblins were soon securely tied and carried back to the machine.
"Don't look so upset greeny" chuckled Gottri as the first Goblin was loaded, "You're going back to your mates." The arm snapped upright, and the netted Goblin hurtled through the air.
'AZZAAAAAAADDZ..."  it howled as it flew. The Dwarfs looked at each other with an air of injured innocence, then loaded the second.
The effect of these missiles was remarkable. The Goblin front rank faltered. Gottri, emboldened by his first success, stood some way in front of the machine with his mallet in one hand, grinning and beckoning.
The Goblin charge broke - clearly no-one wanted to be next in the catapult - and despite the curses and shouting of their officers, they stopped dead.
The next shot flew with unerring accuracy into the middle of the Goblin command group, scattering the assembled chieftains and turning the whole army to flight. Cheering Dwarfs crowded round the catapult crew as the last of the Goblins dwindled on the horizon. A great feast was held to the invention of the Gob-Lobber, as it came to be known, and had the Goblin hordes returned during the next few days, they would have had difficulty in finding a single Dwarf capable of fighting.

Kulgur and Garaz Thrund were two brothers united both in blood and their pyromania. Shunned by the rest of the clan because of the pungent stench of pitch that followed where ever they went and the tendency for prized possessions to go up in smoke, the brothers sought some way to best serve their Lord. A career in tapestry weaving went nowhere after singe marks were discovered on all the sections they had come in to contacts with and they were banned from going anywhere near the tannery after that section of the hold was nearly levelled in an unexplained explosion. Luckily Kulgur and Garaz also had a capacity for invention and thus the flame cannon was born! 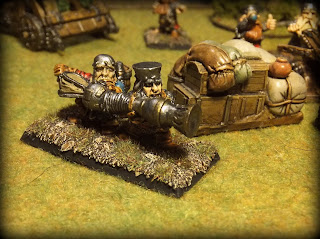 As well as the great cannon, Gorm Grumbaki (Old Grumbler) Drakkenklad's grasnd battery also includes the twin Bolt Throwers, Garaz Grumbaki (Young Whiners) - so called because of the high pitched squeal the flights on the bolts make as they fly through the air towards their target. Their crews are also made up of the more immature and impetuous engineers who are regarded by older and steadier hands  to be whinging little gits! 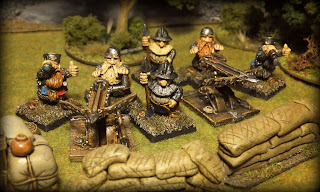