Almost missed the deadline for this month's Tale of Four Gamers - a few too many Dwarves and Dr Who minis methinks! This month I tackled the remaining members of the Doomdrake unit 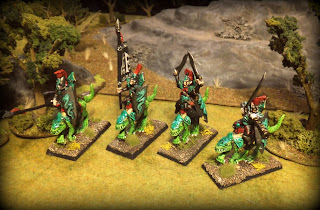 These chaps will be my main fighting unit, the hammer to the anvil - or more likely a glorified pin cushion from enemy missile fire! For the purposes of the game at this year's BOYL they'll be classed as Doomdrakes (+1 shock elites) so I can squeeze them in to the 1500 points allowance. For bigger games they'll be promoted to Helldrakes (more experienced 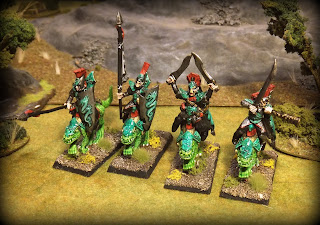 They boast a musician and standard bearer. The standard's +1 combat modifier should come in handy when coupled with the +1 charge bonus and strength boost from their lances should I manage to get a charge in first. The musician is a converted crossbowman from the cavalry range - apparently he didn't appear in any of the catalogues. Some plastic parts from the newer Dark Elf sprues provided him with his horn and weapon as well as the shields for the unit. 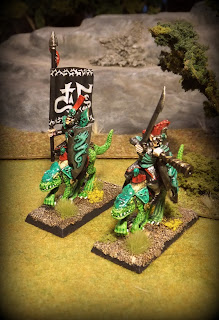 The standard was fun to paint and this time I used the foil off of the neck of a wine bottle rather than the usual foil from a tube of tomato puree. The paint seemed to adhere better to it and it's a little lighter. For the design I chose two Elvish runes which seemed quite pertinent to anyone crossing Calen Rauko and his evil host - Cynath which means chill, death, silence, loneliness and Quyl-Isha which means sorrow, mourning. 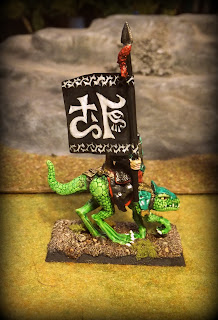 As with the previous batch of Cold One Riders there was a slight conversion of one of the duplicate Dark Elf regiment champions I had. A little repositioning of his legs and some filing near his tender bits made him sit better in the saddle! 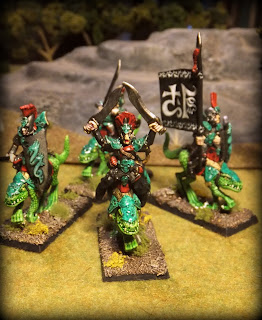 And the unit as a whole - 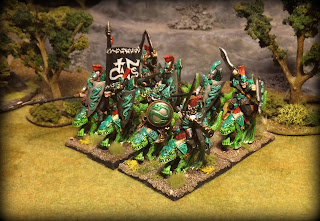 May I present Rauko's Reavers. 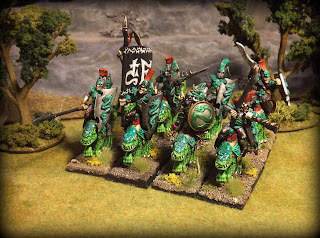 Rauko's Reavers gained their stripes and considerable notoriety at the battle of Feiss Mabdon, the pivotal battle of Rudd Cynhaef's audacious invasion of the High Elf Isle of Rrinnhasha. Spurred on by their captain, Calen Rauko's bloodcurdling war cries, they smashed through the hastily drawn High Elf lines, scattering the archers that threatened to halt the Witch Elves frontal assault. Not a single defender lived to see the dawning of another day and it would be several days before Rauko's Reavers could stir their Cold One mounts from their sated slumber so great was the feast of Elven dead and dying they were fed once the battle was done. 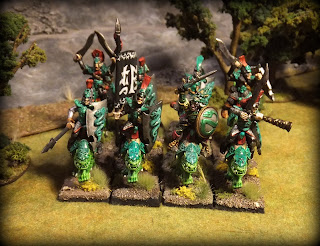