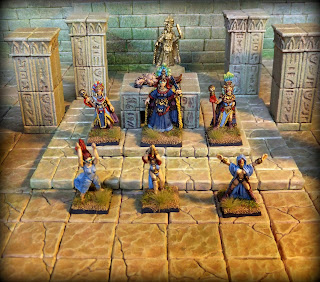 Its been a while since I had any updates on my Shrine of Rigg build. I must admit that the LPL certainly slowed construction down, although I have now completed the outer wall for half of the ground floor and begun work on the second half of the ground floor - if you remember I split the model in half in an attempt to reduce the weight of each piece. 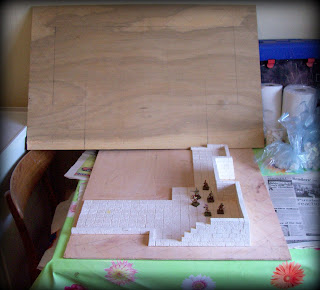 One thing the LPL did do to spur me on was get what I had built of the shrine painted to use as a back drop for the Amazon Sisterhood minis I planned to enter for Round 8.

Of course I also needed to make a raised dais, some pillars to break up the space a little and a plinth to mount the gold statue of Rigg on! 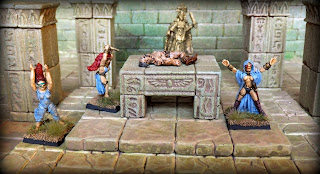 Here you can see the girls getting a bit too excited over their latest offering to the Goddess.

What you can see here is the basic shell of the ground floor - the pillars, dais and altar aren't fixed in and will actually be used in the floor above. Once I have finished the other hand of the Ground Floor I'll be looking at putting the interior walls in, as well as the stairs that lead up to a side entrance in the shrine.

The Sisterhood has a firm grip of the political, religious and technical power and makes up the ruling class in Amazon society. This excerpt from the Second Citadel Compendium goes into a little more detail:

The Sisterhood originates from the High Age of Southern Lustria, a golden age of science and technology. Even then, Amazonia was a wild and fiercely independent land. The technocratic and wise old Slann accepted this and respected Amazon territory. While other humans were regarded as inferior, enslaved and treated little better than cattle, the Amazons retained their freedom.

Old Slann and Amazon were able to exist, almost entirely peacefully side by side. There was even a measure of trade and cooperation between the two races. Amazons were particularly valued as Acolytes and as Thralls by the High Age Magii.

These Amazon emigres were the ancestors of the present day Sisterhood. They were to gain, through their work and their studies, a close familiarity with the High Age sciences.

Eventually the Old Slann fell,  their civilisation was destroyed and their knowledge lost even to their descendants. Modern day Slann regard any trace of the old days with suspicion and fear: the Old Sciences have been lost to them. Not so to the Sisterhood, who retained and preserved much of their knowledge. Whilst they could not hope to recreate the products of the High Age they could still use and maintain many of the artefacts which they had salvaged from its fall.

This knowledge became the basis of the Sisterhood's power and authority within Amazon society. The careful organisation, fanatic devotion and above all, the secrecy of the Sisterhood ensure a continuing hegemony in the religious, political and scientific spheres of Amazon life.

The Sisterhood Mage is one of the high ranks within the Sisterhood - those who rise to such greatness are formidable magic users and are able to call forth the living embodiment of the Goddess Rigg. 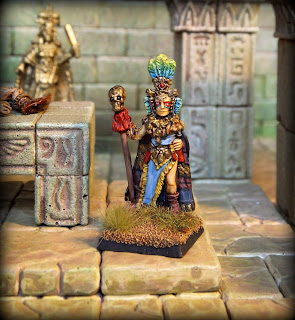 Mother Samantha is one of the only named Amazon characters, apart from the rebellious Kara Lakota.

Samantha's birth place lies somewhere in Eastern Amazonia. Born into a Nomadic tribe, she eventually became a member of the Kalim and from here joined the Devout.

She rose with remarkable speed from the Devout to the Sisterhood and then upwards through the ranks of the Sisterhood. She is now a High Priestess, the Head of the Holy Shrine of Rigg.

Samantha is still surprisingly young. Because of her Nomadic Amazon background she is an agile and able fighter as well as a powerful magician. 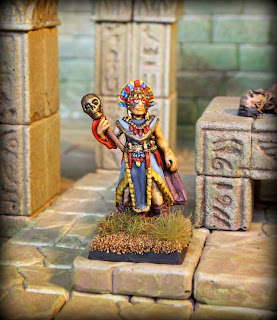 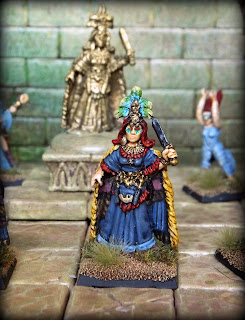 Rigg, Goddess of War,  is the leading figure in the Amazon pantheon - the result of the mythic union between her and the Sea Elf God of wealth and happiness, Amex, was said to be Kalith, Mother of all Amazons.

Although she is of neutral alignment,  her spheres of influence lie in warfare, blood, Koka and violent death!

Should the Great Hall of the temple be violated, Mother Samantha or any other Sisterhood Mage can summon the Goddess herself with a summon demons spell. The Goddess will manifest herself, standing on the altar and obeying the wishes of the summoner for 2D4 turns. She appears as a 9 foot tall giant with red eyes and hair and is armed with a knife and four throwing knives - all magical.

Huge thanks to Zhu and his excellent forays into Amazonia, both for his great posts on the subject but also for inspiring the colour scheme I chose for the Sisterhood. I was so taken with the costume design for none other than Diana Rigg herself, in her role as Klytemestra in the BBC adaptation of The Serpent Son, that I had to pinch it! 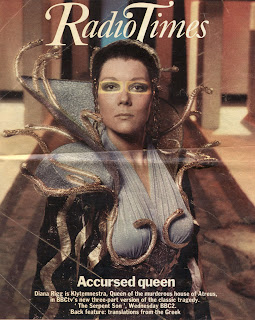 You may recognise the face paint design I've used on most of the Sisterhood. 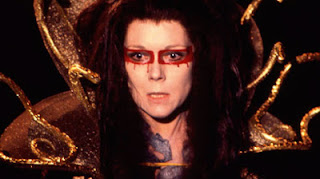 The design on this dress also shows up on the backs of the cloaks of Rigg and the Sisterhood Mage. 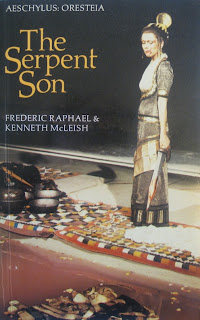 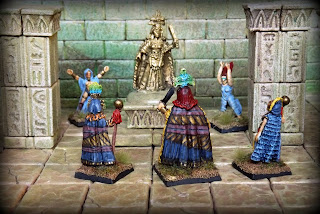 The next models aren't from the Amazon range but make nice Sisterhood Acolytes or Novices.

The evil Priestess from the Fantasy Adventurers range. I had a go at making her robe seem a little on the sheer side by adding faint flesh highlights where the cloth was drawn tight. I figured red hair would be pretty in vogue too if it was good enough for Rigg herself! 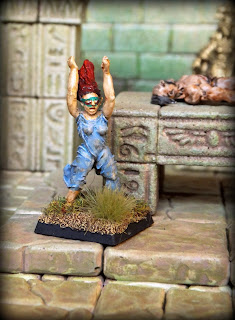 I figured that a Goddess like Rigg would probably be wanting some kind of blood sacrifice so the Houri with dagger, also from the Fantasy Adventurers range, would also fit nicely. 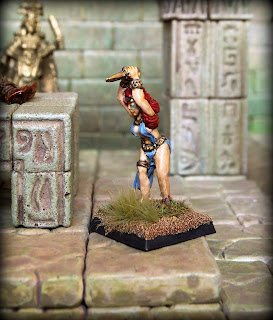 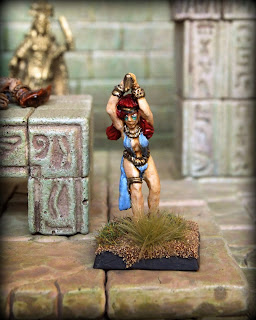 And finally another Samantha - this time Samantha Phox from the later range of Wizards. She's obviously had a little too much Koka or gotten a bit carried away with the rituals... 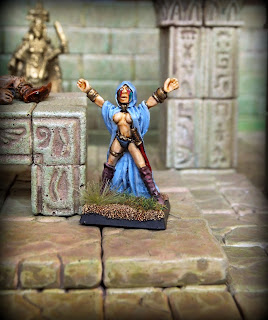 So to finish off I thought I'd mock up a few shots of what a game might actually look like once the Shrine is done! 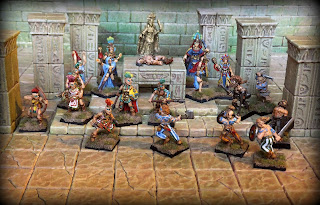 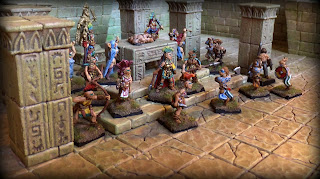 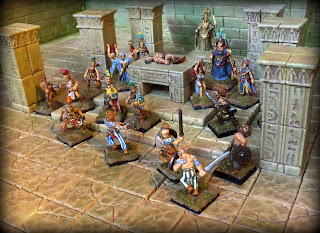 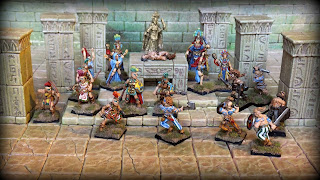 Not too far off the Cover art on the Second Citadel Compendium?! 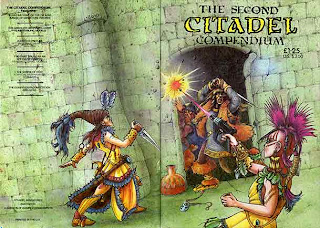