Havoc... its ok to wreak a little!

As I'm a little weary of batch painting Orc archers for the bloodbath thought I'd make good on a promise I made to VoodooInk and write a review of his rather splendid game - Havoc! Not written many reviews before so bear with me - these are some of the things I liked best about Havoc...


You may have read the battle report I posted a while back so hopefully that got across the idea that Havoc is a lot of fun!

Whilst writing the report I included a few references to the game mechanics - not something I'd normally do as I think it interrupts the "story" a bit but with Havoc there are some really interesting and new ideas that affect events in the game - more of which later...

First thing that was new to me and might take some a little getting used to was The One List (to rule them all!). There is an army list and stats provided but that goes for all players - orc spearmen are the same as skeleton spearmen are the same as dwarf spearmen and so on... I quite like this approach as it makes you think more about building balanced forces and lets you use all those old minis you might have gathering dust!

For more variation you can bring along the Named - heroes, champions and warriors who stand out from the rank and file through their skills and abilities - great characters like the Executioner, the Harrier, the Bard, oh and giants are truly terrifying and hilarious! Oh and thanks to VoodooInk for writing up some excellent rules especially for my Spectre!

So best talk about the rules too - Competing for momentum at the start of each turn is interesting - the player who wins it gets to act first in each phase and decides which combats they want to resolve first, among other advantages.

Players take turns to activate troops, which can be activated in blocks of up to 6 minis in base to base contact or as single minis - skirmishers get to activate together no matter how many you have or where they are on the table! This means that a player who has grouped their forces well and uses musicians (activates other nearby troops) can get their force moved before the enemy and possibly force the turn to end before all enemy minis have been activated. Formations are up to you but anything is possible - wedges, shield walls, testudos...

Combat is great fun - troops get a certain number of MAD die (Melee and Defense) that can be allocated to attack or defense. VoodooInk demonstrated this well in his Skorne/Dwarf battle report -


1. Cyclops declares he will attack with 3 dice.
Rhoric declare that he will defend with all 5.
Both players roll their dice, keeping 3 of their choosing.
Rhoric wins the roll.


2. Rhoric uses his Parry Ability to interrupt the Cyclops attack.
He only has 1 die in attack BUT he spends his last 2 HAVOC tokens to bring the total to 3.
The Cyclops placed no die in defense, so only gets to roll 1 ‘Never Say Die’ die.
Both players roll their dice, keeping all 3 and 1 respectively- the result is a tie.


This is a Glancing Blow, so the damage roll is cut in half; it was already halved due to the damage reduction of the Cyclops. Needless to say, this attack did not cause any harm!


3. The Cyclops attacks with his remaining 2 melee die.
Now, Rhoric has none left.

The Skorne plater uses the Arcanum being held by the Warlock to augment the rolls and destroy the dwarven champion.

Combat is kept nice and simple - multiple combatants are only allowed on one side - no 2V2 combats with a headache working out who hits what?! Seemed strange at first to not be able to charge in and assist a beleagured comrade but the game is supposed to happen in small bursts of time - quite cinematic - I read into this that a human warrior wanting to jump in to assist his comrade would either get there too late as he is hacked down by the 5 goblins swarming him or would be unable to find an opening in the maelstrom to get stuck in - either way it keeps things simple and I found it worked rather well as well as making the whole maneuvering for advantage before the charge is unleashed very important!

Havoc tokens have been mentioned a couple of times - these are available to the Named - they can be spent on buying additional actions or dice in attack or defence, armour rolls or damage rolls - especially useful when your hero is running rampant in a cut scene (mini phase that happens if the dice roll for momentum is a draw) where they can become extremely dangerous!

Magic is fairly straight forward - mostly augmenting other mini's attacks or defenses but this can get quite tactical - I believe more spells may be in the pipeline?

Before I start rambling on and on I'm going to stop there - there's loads more! All in all its a great skirmish game which works well with around 20 odd minis on each side, although I'm sure it could be scaled up. You could even de-fantasy it and use the rules to play Historical games with black powder weapons should you so desire...

It is a very flexible and playable set of rules - I only brushed the surface in the one game I played and am eager to try out some of the endless tactical options that are there for the taking!

Oh and the book itself is lurverly - great black and white illustrations and written in an engaging and entertaining tone! 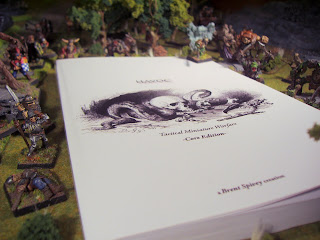