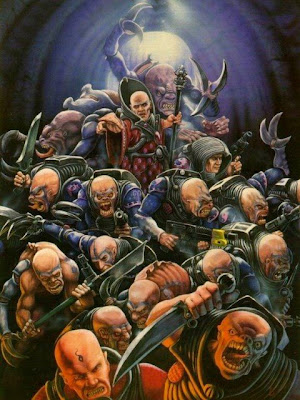 Brotherhood of the Life-Giving Father 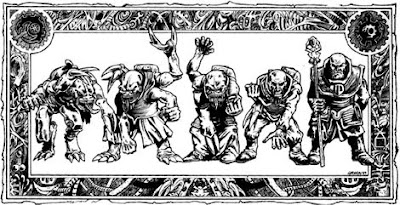 Once I had finished my Rogue Trader's Retinue my eye was caught by the Genestealers - particularly by an old Tyranid army list in White Dwarf Magazine. Loved the old models of the Patriarch, Zoats and Hunter-slayers so started searching ebay to start the cult. The idea of Brood Brothers also caught my imagination and a few of my faithful Imperial Guard minis found themselves corrupted by the seductive lure of the cult.

Found some great minis from the Necromunda range to complete the squad, along with a few other fallen Imperial minis from the Adeptus Arbites and Space Marine Scouts - no doubt ensnared on a lonely Space Hulk!

They also needed some wheels so I spruced up a old Rhino I had - added some spiky bits and more improvised weaponry to make it look like it had been pinched and beefed up a bit for the Cult's sinister purposes.

Always fancied building or converting a Cult Limousine - bizarre idea for the battlefield but a lot of fun as can be seen in this old pic from White Dwarf. However, never found a suitable model to convert and the idea fell by the wayside.

Found a great site called Bell of Lost Souls which had a new list for the Genestealer cult to fit it into the new 40K rules - wasn't so bothered about following any rules but there were some great ideas like the Brood Initiates - ordinary civilians initiated into the cult and whipped into a fanatical religious fervour!

Again had loads of fun tracking down suitable minis - some from Heresy, Empire Flagellants, Old Citadel and Rogue Trader minis and so on -

The actual Genestealer minis I wasn't that chuffed with - unfortunately the budget didn't run to a horde of the old metal minis so I had to make do with some cheapo plastics!

However the Patriarch more than makes up for them -

Couldn't resist putting a dead Space Marine sprawled at his feet either!

No Cult would be complete without a Magus and his familiar -

As Genestealer Cults were supposed to soften a Planet up in preparation for a Tyranid invasion and because the old Tyranid army was so cool I had to include a few advance elements of the Hive Fleet.
Zoats are a sad loss to the Warhammer world -

However, they proved somewhat rare on Ebay and I had to top them up with the slightly newer version that came out when the Tyranids were rereleased.

Another great idea from the Bell of Lost Souls were the Hybrid Monstrosities - Native creatures that have become infected by the Genestealer incursion and are now under the control of the Patriarch.
Having flicked through the Creatures pages in Rogue Trader I felt these Heresy Maggots could
be Lash-Worms -