Another Regiment musters under the banner of Zharradan Marr, ready to take the battle all the way to Balthus Dire's Citadel of Chaos perched high in the Craggen Heights of the Trolltooth Pass! 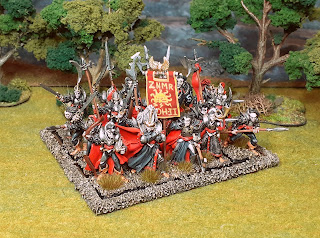 The furious slapping of paint on to little lead men continues in a valiant attempt to be ready in time for BOYL. However I did find time yesterday evening, whilst sitting in a leisure centre car park waiting for my daughters gymnastics session to end, to do a bit of blogging on my new phone - amazing what one can achieve with modern technology although there may be the odd bizarre word left in thanks to the thrice cursed automatic corrective text!

The next addition to Zharradan Marr's legions is the Black Elves - a unit I finished a while ago but never had the time to blog about - until now. The Black Elves of Titan are a good example of its more nuanced world building. Like the Elves of the Warhammer world, the Elven Kingdons of Titan suffered a great schism in which those who were tainted with the touch of evil fought a great civil war against their kin. They were defeated and forced to retreat under ground, where they were warped in to the twisted form of the Dark Elves - demon worshiping, black skinned travesties of the fair form they had once shared with their Wood Elf cousins.

This is where the Black Elves come in with a nice shade of grey to add to the polar opposites good and evil.
"Originally renegades from the evil kingdoms of the Dark Elves... They abandoned the forests with them and helped build their underground kingdoms, but grew more and more horrified as the Dark Elves dabbled in fearful magic and demonism. So they fled the cavern cities and settled in isolated areas away from other  Elven races, where they now live squalid  lives alongside Orcs, Goblins and other inhuman races." Out of the Pit (1986, Livingstone, Jackson, ed. by Gascoigne) 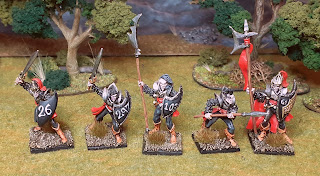 Also according to their entry in Out of the Pit, "their skin is some way between grey and black in colour, their slanted eyes yellow and cat like. They dress in shabby clothes of outlandish design and sometimes decorate themselves in a similar fashion with bizarrely cropped hair and painted patterns on their faces." I'd forgotten about this when I painted them but in hindsight I figured it might have been a bit tricky making that kind of skin tone look good.

So the Black Elves present an interesting counterbalance to the over the top evil of the Black Elves and the goody-two-shoes Wood Elves - "some Black Elves are nomads, travelling the plains in caravans to trade their wares in isolated settlements. Others live in small villages themselves, hunting and farming on the poor land. All Black Elves are distrustful of other beings. They will attack other types of Elves on sight, but other beings will be treated neutrally, if not in a friendly manner. They have no love for strangers and are not averse to waylaying them for their gold." 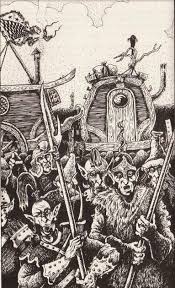 In terms of my choice of miniatures,  Ral Partha came to the rescue once more! The Elves in their Fantasy Armies range were just about perfect - not too Wood Elfy, not too Warhammer and not too evil but with a few design elements that suggested they didn't sit round all day composing poetry! The red and black colour scheme I've settled on for the legion's uniform seems to suit them and as I couldn't depict the numbered medallions each legionary wears to identify themselves with, I decided to transfer the idea to their shields. I think I may have started using the number references of any paragraphs that mentioned Elves in Creature of Havoc, the Fighting Fantasy game book that heavily features Zharradan Marr, his lair and many of the creatures under his influence - but soon realised I would fast run out so settled for any number under that magical 400 that Fighting Fantasy fans know so well!

My Human regiment nears completion and the newly converted Lizardmen await the lash of the brush patiently - I may make it in time for BOYL yet...
Posted by Thantsants at 09:35